BRILLIANT BARNEY JUMPS UP TO THIRD WITH BIRMINGHAM DOUBLE 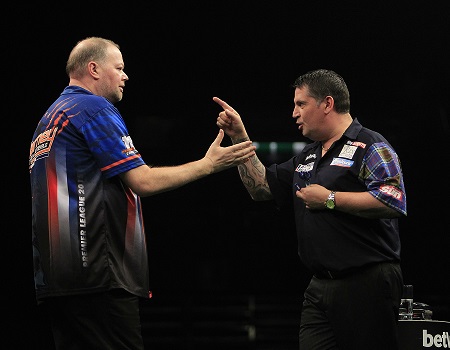 RAYMOND VAN BARNEVELD jumped up to third in the Betway Premier League with victories over Gary Anderson and Adrian Lewis in Birmingham on Thursday, as Dave Chisnall sealed a Play-Off place.

A dramatic 13th league night of the season proved unlucky for Lewis as he saw his Play-Off hopes virtually ended by two defeats - but van Barneveld continued his brilliant form with a pair of wins to move into the top four.
The Dutchman had only escaped elimination on Judgement Night with a draw against Anderson, but he took his winning run to five successive matches as he overcame the Scot and Lewis at the Barclaycard Arena.

World Champion Anderson had taken a 4-0 lead in their contest as he punished a string of missed doubles with some superb finishing of his own, including a showpiece 125 checkout of bullseye, outer bull and bullseye.
Van Barneveld, though, clawed his way back level before punishing five misses from Anderson to lead 5-4, and though the Scot hit back with a 13-darter, two missed doubles to claim a draw in the deciding leg allowed the reigning Premier League champion to edge the win. 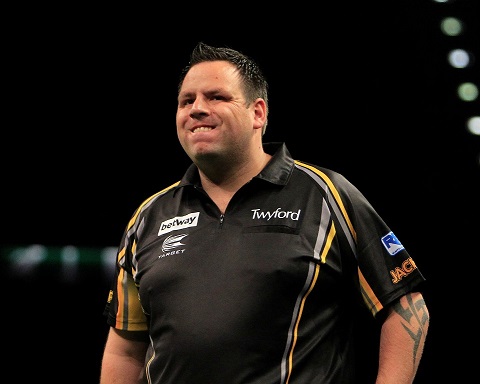 He then returned to the stage later in the evening and produced a sublime display to overcome Lewis 7-2, a result which moved him above Anderson in the table. Van Barneveld took out 161 to win the opening leg, and though Lewis took out a pair of 132 checkouts - ending both on the bullseye - it was the Dutchman who reeled off four straight legs to claim the points.

"It's been an amazing night for me and I'm so proud of myself," said van Barneveld. "I was playing against two of the best players in the world and I'm really pleased. Adrian beat me 7-1 on the opening night with a 114 average, so it was a bit of payback for me! He's an amazing player but I put him under pressure. I had my back against the wall in Week Nine when I played Gary and I got the draw to stay in, but to have five straight wins since and be in the third position is great for me. I'm not in the Play-Offs yet, I still need wins, but I'm very proud." 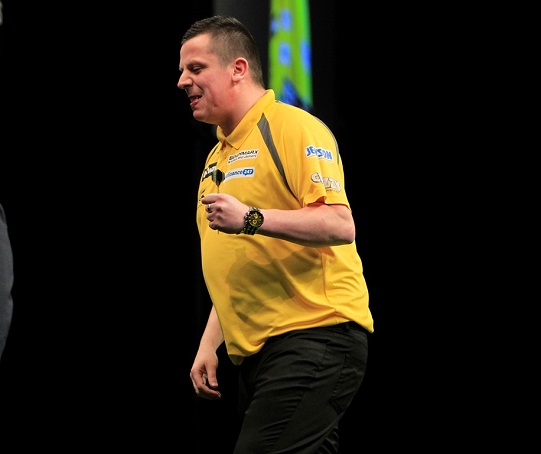 The night also saw Dave Chisnall claim his Play-Off place with a 7-4 win over Lewis in the opening fixture, as the St Helens ace bounced back from a narrow loss to van Barneveld last week with a win which consolidates second place in the table.
Lewis opened the game with a 180 and led 3-1 before Chisnall turned the contest on its head with successive checkouts of 130, 116 and 104, before taking out a key 6-1 to move 5-2 up. He added a 180 to lead 6-3, and though Lewis hit back in the next it was the 2014 Grand Slam of Darts runner-up who claimed the win to seal his spot in the Play-Offs at The O2 in London on May 21.

"I'm delighted," said Chisnall. "I've finished well this season and that was the difference again tonight. The defeat last week was playing on my mind a bit before the game and I started slowly, but those three ton-plus finishes probably won me the game. Adrian missed a few darts at a double and I took my chances and scraped the win. Even though I'm through it's important to keep playing the darts I've been playing recently - you don't want to slack off and hopefully I can carry on winning." 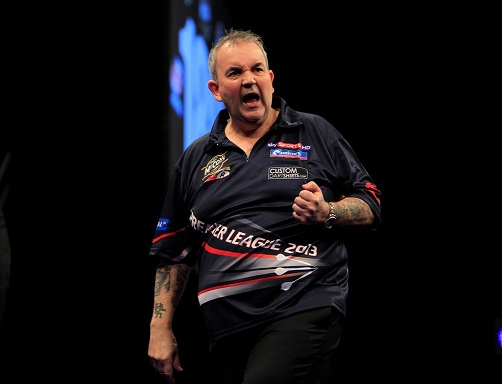 Those results mean that six-time champion Phil Taylor is in danger of missing out on the Play-Offs for the first time since the Premier League was introduced in 2005, after slipping to fifth, and three points behind the top four, with a defeat to Michael van Gerwen.
Taylor, though, did little wrong as league leader van Gerwen averaged 112.91, hit five 180s and an 11-darter as he came from 3-1 down to storm to a 7-4 triumph.

"Phil played really well at the start but I was playing really well too, and when I was 3-1 down I just had to hold my own throw and try to break his, which I did," said van Gerwen. I'm really pleased with my own performance, and I hit the right shots at the right moments. Phil's a legend and to beat him like this means a lot to me. Averages are important but it's also about getting the two points and I did that tonight. I want to keep this going now in the next two weeks before the Play-Offs."

The night's other game saw James Wade and Stephen Bunting share a dramatic draw which means that the duo cannot now qualify for the Play-Offs.
A tight contest saw Bunting take out 100 before breaking throw for a 3-2 lead, only for Wade to edge ahead - but the 2009 champion missed two match darts in the deciding leg as the St Helens man stepped in to take out 120 for a point.

"I feel good and I enjoyed the game, but you obviously go up there to try and win the game and I couldn't quite do that tonight," said Bunting. "It's been a bit of strange Premier League for me and I've not played as well as I wanted to, but I want to enjoy the last couple of weeks and pick up a couple of wins."

Wade's Play-Off challenge has faltered with four losses and two draws since Judgement Night, and he admitted: "I'm really disappointed. It wasn't a good enough result and I didn't play well enough - Stephen had a better game than me. If anything, I was probably a little bit too nervous and there was maybe too much respect for Stephen, but in the final two games I want to prove a point to myself."