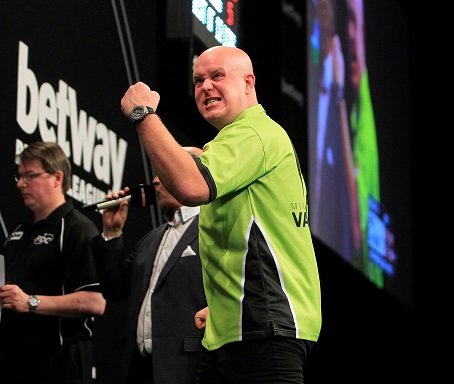 MICHAEL VAN GERWEN secured his place in the Betway Premier League Play-Offs with a stunning whitewash of James Wade in Cardiff on Thursday, as wins for Raymond van Barneveld and Stephen Bunting and a draw between Phil Taylor and Adrian Lewis left the top-four race wide open.

Van Gerwen produced the season's highest average of 116.90 and denied Wade a dart at a double with a scintillating performance in his first of two games at the Motorpoint Arena. The Dutchman also hit seven perfect darts in one leg, five 180s and took out finishes of 105, 154 and 130 as he powered to victory in the season's first whitewash. The victory also mathematically secured van Gerwen's place in next month's Play-Offs at The O2 in London, before he later returned to the stage to take on World Champion Gary Anderson. However, he left to rue missing three darts to claim a draw in a high-quality contest as Anderson edged a 7-5 win to consolidate his position in third place.

"I played well tonight and they were both fantastic games," said van Gerwen. "The game against James was an amazing performance and I'm proud of myself. I'm so happy with how it went. I knew that I was playing quite well but the average was better than I thought so I'm over the moon with that. In the last game I felt that we both deserved a draw but I gave it away at the end with the three darts to get a point. I did well tonight and didn't play badly but I want to win all my games and it was one of those weeks." 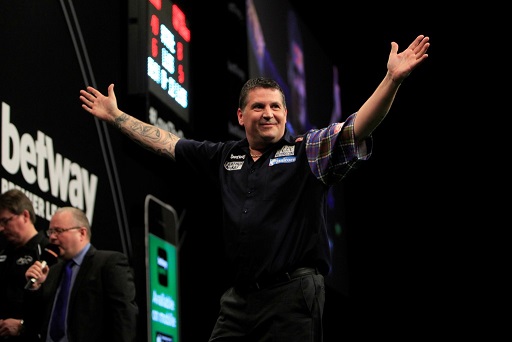 Anderson's win saw him bounce back from a disappointing defeat earlier in the night - where he went down 7-1 to Stephen Bunting in his poorest display of the season - to overcome the world number one in a deciding leg.
The opening six legs were shared before Anderson defied a van Gerwen 180 to finish a 13-darter to move 4-3 up before breaking throw for the first time by hitting the bull to check out 86. Van Gerwen hit back to level by winning the next two legs, but Anderson finished 130 to claim at least a draw by moving 6-5 up before punishing the Dutchman for missing the bull for a 170 finish and two subsequent dart at double eight as double five gave the Scot both points.

"The game against Stephen was one to forget - I might as well have been throwing left-handed - and it was good to get the win against Michael," said Anderson. "Coming into the night you'd have thought that I'd beat Stephen and then struggle against Michael, especially after his first game, but in the first game I couldn't get going. I'm always up for games against Michael and I'm nipping at his heels and I'll take that. To get two points is a big lift in the table, but I want to keep pushing from here." 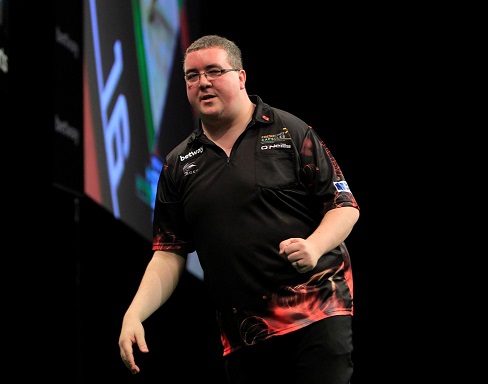 Bunting's earlier win over Anderson saw him take the first five legs without reply as he capitalised on missed doubles from the Scot, who took out 78 to hit back but saw the St Helens ace take the next two legs to pick up his first win since Week Six.
Bunting's performance lifted him to seventh in the table, above Wade, and keep his hopes of capping his debut season with a Play-Off place alive with him sat three points adrift of the top four with three games to play.

"To get a 7-1 win is magnificent," said Bunting. "The plan was to get off to a great start, but many times in the game I kicked off a leg with a big score and that helped me through. Gary's a fantastic player and he didn't play anything like he can, and I think the first leg summed it up with the missed doubles by both of us. If he'd have taken that then maybe my head would have been shaking, but thankfully my doubles went in today and I got the win."
Bunting added: "I don't even look at the league table any more - I know what I've got to do; win the four games, and that's the first one ticked. I've got three games left and I know I can do it." 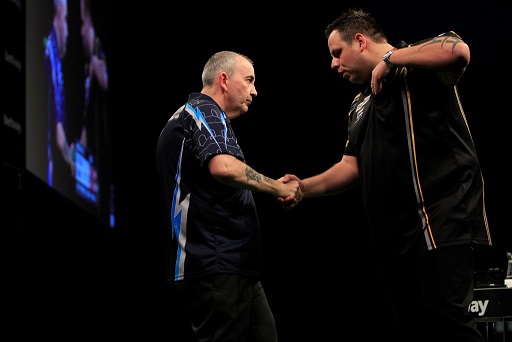 Phil Taylor retains fourth place on 13 points after he drew with Adrian Lewis in Cardiff, with the 30-year-old leading 6-4 before the six-time Premier League champion hit back to share the spoils.
The pair both missed chances to break throw as the first eight legs were shared before Lewis broke with a 72 checkout and landed double four to move 6-4 up. Taylor, though, finished double 16 to send the game into a deciding leg and snatched a point by landing tops for a 13-darter.

"I'm very happy with a draw," said Taylor. "I missed a few doubles and you can't afford to do that against him, so it feels like a win and a loss at the same time. My scoring's fine but my doubles aren't quite there and I've got to improve that, but my form's coming. It's climbing steadily but I'm still making mistakes and I can put that right."

Lewis sits one point adrift of Taylor going into his two games at the Barclaycard Arena in Birmingham next week, and admitted: "I'm happy to get a point but not as happy with my performance. I missed too many doubles early on and hit a few silly shots and Phil took advantage. Fair play to Phil because he dug deep at the end and his last two legs were superb. He played well but some of my finishes under pressure were good, especially the 147. It's a massive night for me next week and I'm looking forward to it." 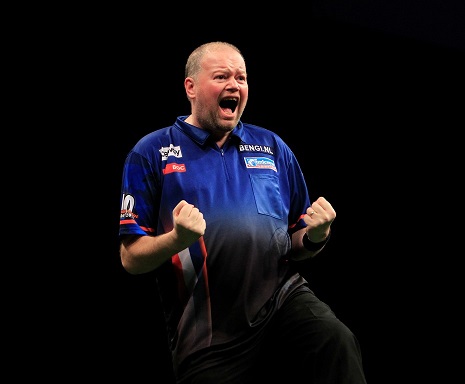 Reigning champion van Barneveld picked up a third successive victory to continue his title defence with a superb 7-5 win over Dave Chisnall - who led for most of a thrilling contest before being pipped to the post.
Chisnall led 2-0 before finishes of 96, 90 - on the bull - and 76 saw van Barneveld reduce the gap to 4-3 before he levelled by taking out double six to break in leg eight. Chisnall immediately broke back as he traded 180s with the Dutchman before posting double eight to lead 5-4, but a brilliant 132 bullseye finish saw van Barneveld square the game. He then finished 85 to win the 11th leg to lead for the first time, before Chisnall - for a second successive leg - traded 180s with his rival in the decider only to miss two darts to claim a draw, as another 90 finish on the bull gave van Barneveld both points.

"It was an unreal win," said van Barneveld. "The 132 was amazing and the three bull finishes were extremely important "For the last three or four weeks I'm playing amazing, hitting good averages and getting the results. Next week is going to be an important week for me and I'm going to work very hard because I'll know after that if I can qualify for the Play-Offs or not. I'm playing extremely well and feeling confident, and I'm happy and enjoying myself - because I'm winning. The crowds are behind me and I still believe that I can make the top four."