Raymond van Barneveld ended Michael van Gerwen's unbeaten run in the 2015 Betway Premier League with a superb 7-3 defeat of his Dutch rival in Aberdeen, as Phil Taylor got his Play-Off challenge back on track with three points. 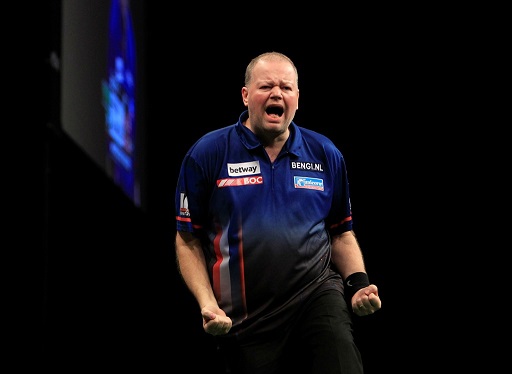 Reigning Premier League champion van Barneveld repeated his victory over the world number one in last year's final as a clinical performance saw van Gerwen suffer defeat for the first time this season, in his 11th game.
Van Gerwen recovered from early missed doubles to hit back from 2-0 down to level and was also all-square at three-all before van Barneveld pulled clear. An 11-dart leg pushed van Barneveld 4-3 up before he punished three uncharacteristic misses at double top from van Gerwen by breaking throw on double ten, before finishes of 78 and another 11-darter sealed victory.

"I'm extremely happy and it was a really good game," said van Barneveld. "I was really focused on this game and my finishes helped me, as well as those two 11-darters. To beat Phil last week and now Michael, I'm really happy. They are the two best players in the world at the moment but I'm playing well and that's seven points from the last five weeks. Michael's had a tough week but he didn't play that badly. He missed some crucial darts in the second leg but I'm battling hard and I want to get into the top four and win this fantastic Premier League again." 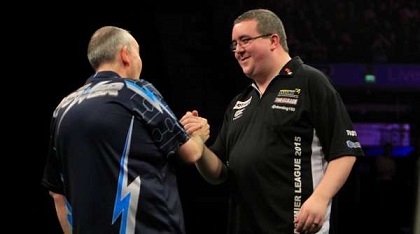 Six-time Premier League champion Taylor, meanwhile, bounced back from two successive defeats as he picked up three points from a possible four at the GE Oil & Gas Arena, defeating Dave Chisnall 7-3 before sharing the spoils with Stephen Bunting.
Taylor took an early 3-1 lead in his clash with Chisnall, who cut the gap to 4-3 but was unable to level as the Stoke star pulled clear to take the points.
Taylor later returned to the stage against Bunting, but spurned ten match darts as he walked away with a draw. Taylor again took a 3-1 advantage and also held a 5-2 cushion before Bunting hit back to level with a 132 checkout. Taylor then finished 64 to move 6-5 up and secure a point, and he first in a 177 in the deciding leg to be first to a finish only to see ten match darts miss their intended target, allowing Bunting to snatch a draw.

"I'm really pleased to come up to Aberdeen and take three points," said Taylor. "In the first game I got stuck in because I knew Dave was going to play well and I knew what I was up against, but I'm fighting for survival. Barney caned me last week but I'm better than that and I had to go out and perform tonight. I'll be there or thereabouts but I think with it being so close it's given us all a kick up the backside and it's interesting."

Bunting had earlier suffered a 7-2 defeat to Adrian Lewis as the two-time World Champion continued his revival with a third successive victory.
Lewis streaked into a 4-0 lead by punishing some early missed doubles by Bunting, who won two legs from three to hit back before the Stoke ace picked up both points. 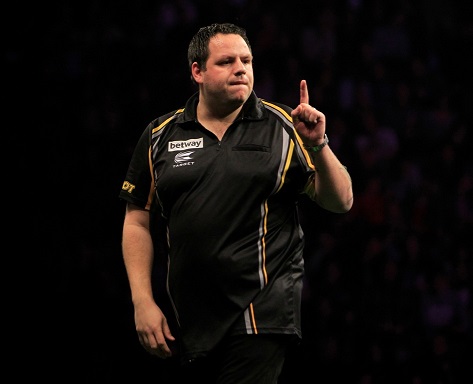 "I'm happy with that because it was a big game that I didn't want to lose," said Lewis. "Stephen missed a few doubles early on but I was there on his tail, I kept calm and got the job done. I've done a lot of work on my game recently and it's showing in my results. It puts me in the mix for the top four and I think it will be between me and him for taking a point."

The night also saw World Champion Gary Anderson hit back from 6-2 down to claim a draw with James Wade, delighting the sell-out crowd who gave a memorable welcome to the Scottish star.
Wade had silenced Anderson's home support by taking a 2-0 lead, with the world number three hitting back to level only to be punished for missed doubles as the left-hander took the next four legs - and finished a brilliant 170 checkout - to claim a point. Anderson, though, hit back strongly to take the next two and punished one missed match dart at tops from Wade by forcing a deciding leg in which he landed a fifth maximum of the game and tops to secure a draw.

"I was playing okay but a couple of missed doubles cost me a few legs and the next thing I knew I was 6-2 down and looking at a defeat, so I'll take the point. I had to stick in after his 170 finish and I got my scoring going again. It was nice to give the fans something to cheer because the fans in Aberdeen create a great atmosphere."
2009 Premier League champion Wade admitted: "It should have been two points but it wasn't. Gary missed a lot of shots but I played okay - I didn't play great - and I'll move on from here."