DAVE CHISNALL picked up a brilliant Betway Premier League double in Sheffield to take a huge step towards sealing his Play-Off place, as Michael van Gerwen, Raymond van Barneveld and Adrian Lewis also picked up wins at the Motorpoint Arena. 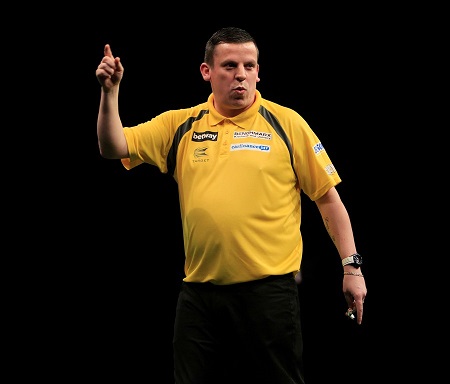 With the second phase of the tournament kicking off following last week's elimination of Peter Wright and Kim Huybrechts on Judgement Night, Chisnall and James Wade doubled up to compete twice in Sheffield.
Whilst Wade was defeated twice, Chisnall produced two outstanding displays as he overcame the left-hander 7-1 with a 114.17 average - his highest ever in a televised game - after earlier seeing off World Champion Gary Anderson 7-3. That double earned Chisnall four league points to strengthen his position in second place in the league table - and crucially give him an eight-point cushion over his rivals battling for a Play-Off place.

Chisnall had landed key finishes of 150 and 124 as he turned a 2-1 deficit into a 5-2 advantage on his way to victory against Anderson, hitting six 180s and a 106.91 average.
He was in even more dominant form on his return to the stage against Wade, limiting the 2009 champion to only two darts at a double in a performance which saw his average second only to Phil Taylor in Premier League history.
Chisnall took the first five legs without reply and had missed double 12 for a 138 finish before Wade took leg six by finishing 62 - but the left-hander's fightback was short-lived as the St Helens ace posted a fifth 180 of the game in a 12-darter and double ten for a 14-darter to complete the win.

"It's nice to get two wins because it was always going to be hard," said Chisnall. "I felt comfortable throughout the night and I got a great start by defeating Gary. It was always going to be a confidence boost beating the World Champion and I just wanted to take the same game up on stage against James, which I did. I've done my job by winning two out of two, and I played well - importantly I finished well tonight. I felt good up on stage but I've put a lot of practice in and it's all working out. This time last year I was on seven points, so it's a big improvement to be up to 17 already!" 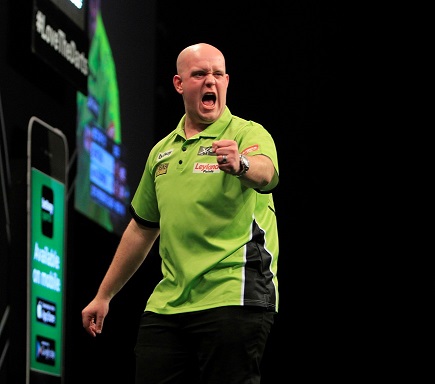 Chisnall now sits just one point behind the unbeaten league leader van Gerwen, who edged out Stephen Bunting 7-5 in their Sheffield encounter.
Bunting hit back from 3-1 down to lead 4-3 and 5-4, but he paid for missing a dart at the bull to claim a point in leg ten when van Gerwen levelled on double nine, hit two 180s to break throw with a 12-darter and then took out 70 for the win.

"I wasn't at my best tonight but I got the win and another two points so I'm happy with that," said van Gerwen. "I missed a lot of doubles but I produced the darts when I needed to. I let Stephen back into the game and he scored well, but at five-all I wanted to have one big leg and I started with 180 and 180, and the 12-darter was amazing for me and very important." 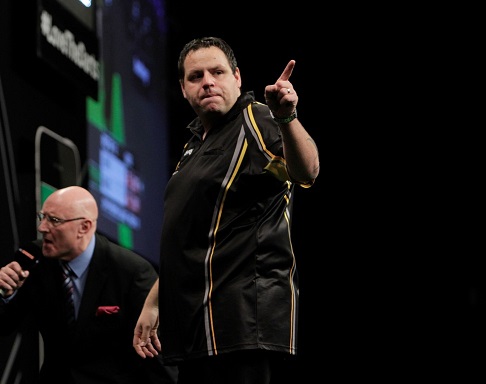 Wade's defeat to Chisnall compounded a disappointing night for the world number six, who also went down 7-4 to Adrian Lewis as the Stoke ace joined the left-hander and Taylor on nine league points in joint fourth place.
Lewis' win followed up his defeat of Wright to ensure that he avoided elimination a week ago, and has kick-started his own bid to claim a semi-final spot.

"I was happy with that win," said Lewis. "James wasn't at his best tonight but I did the job and it's a good win for me. I scored pretty consistently and kept the pressure on James, and when I needed a finish it went - some of my two-dart finishes were very good. I'm in contention for the top four now and I'm on the tails of the top four now." 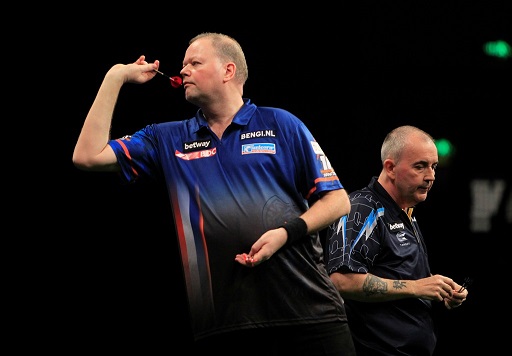 Reigning champion van Barneveld sits just one point behind the trio on nine points after he overcame great rival Taylor 7-2 as the Stoke great suffered a fourth defeat in five matches.
Taylor had hit back from 2-0 down to trail just 3-2, but missed five darts to level the match in a key sixth leg and also missed tops in the seven as van Barneveld pulled clear to complete his first 'Premier League double' over the 16-time World Champion.

"To beat the best player in the world 7-2 is a dream and I'm extremely happy," said van Barneveld. "Phil didn't play as well as he can and he missed a lot of doubles, which leg me in, but I was surprised by his game because we all know what he can play like. I had to keep trying to hit my treble 20s and take my chances when he gave me them. I was really focused because in all these years in the Premier League I'd only got two draws against Phil in the league stage but this year I've won twice, and in the last four weeks I've been playing okay. I'm fighting to get into the top four, and after tonight I believe it can be done."