First Set 1-3 - Gilding breaks throw by landing tops to claim the first leg in impressive fashion, and doubles his lead before Webster gets off the mark on tops, however the debutant from Bungay finishes tops once more to wrap up the set.
Second Set 2-3 - Webster hits a 180 but misses five doubles to finish the leg, allowing Gilding to steal ahead on double three, before further misses from the Norfolk thrower cost him in the second leg as his rival finishes 60 on tops to move 2-0 up. Webster keeps the game alive by finishing 56 on tops before levelling the set on double 16. Webster then hits a 174 score in the deciding leg, with both players missing the bull for ton-plus finishes before Gilding returns to finish double eight to seal victory.
"It's a big relief to get a win like that," admitted Gilding. "Darren didn't put me under pressure or play as well as he could, and I knew I always had the advantage in the second set as he came back at me. It's all a matter of experience for me and I'm very much a newcomer to the big stage, and I just need more experience in front of the cameras."

First Set 3-1 - Thornton kicks off the match with a 160 score before taking the opening leg in 13 darts, and he then breaks throw in the second leg after being handed a reprieve following two earlier missed doubles, with Pipe missing the bull to finish 90 in allowing the Scot back in on double five. Pipe sparks his challenge with a brilliant 132 checkout, hitting two bullseyes and double 16, but misses the bull to level the set in leg four, allowing Thornton to finish 90 on double 18 to move a set up.
Second Set 3-2 - Pipe misses the bull to finish another 132 checkout, but returns on double eight before Thornton lands another 13-darter as he levels. Pipe edges back ahead on double ten, but after the Scot hits tops to send the set into a decider, the Taunton ace misses two darts - at double four and two to take out 68 - to level the game, allowing Thornton to complete victory on double top.
"I'm happy with that," said Thornton. "I started well and I think that put Justin under a bit of pressure because he's usually one of the best double-hitters in the world." 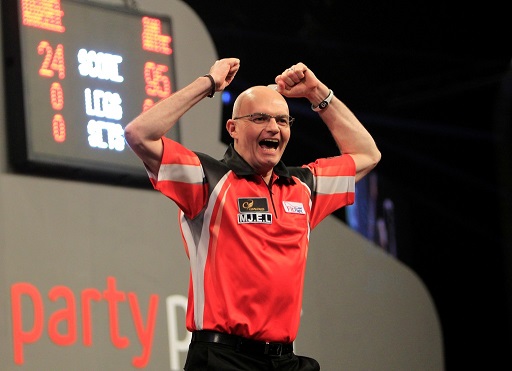 First Set 3-1 - White claims an immediate break of throw, finishing double ten to atone for four previous missed doubles. Mansell, though, lands double top to win the next two legs and then hits a 180 before double six gives him the set.
Second Set 3-1 - Mansell takes the opening leg on double ten and then opens the second with a 160 score, giving himself the cushion to initially miss six darts at a double before returning to punish two missed chances from White at double 19 as he lands double three to move 2-0 up. White hits a 180 and finishes 81 on double 12 to hit back, but Mansell edges clear in leg four before returning from missing double 12 to take out 138 by hitting the bed at the second time of asking to secure his first World Grand Prix victory.
Mansell had missed three match darts to knock out Simon Whitlock last year, and admitted: "That has haunted me for 365 days - every time I've thrown darts it's been in my head and I was determined that if I had that opportunity tonight I'd take it. I'm relieved because there was a lot of pressure - you're playing in front of an Irish crowd and they gave some serious support, so it's a brilliant feeling."

First Set 3-1 - Painter takes the opening two legs before Hamilton gets off the mark in the third by taking out 32, but Painter lands a 180 in the fourth before finishing 74 on tops to wrap up the set.
Second Set 0-3 - Painter's starting doubles desert him as Hamilton take the opening two legs on double four and double 16, and the Stoke ace then opens leg three with a 152 score and takes the set on double eight without his opponent having a dart at a finishing double.
Third Set 3-0 - Hamilton misses the bull to finish 170 and is also unable to land two further doubles as Painter steps in to finish 82 with a bullseye, double 16 combination to take the opening leg. He then defies a 174 from Hamilton by taking out double 16 to maintain his flawless record at finishing doubles - at 5/5 from the game - before sealing victory in the next leg, missing double 16 for a 152 checkout but returning - following a 180 from his opponent - to hit the bed at the second time of asking.
"Anyone can beat anyone in this first round so I'm pleased to get through that," said Painter. "In the second set I was rubbish and I couldn't get my starting doubles, it was poor, but when it really mattered in the last set it all came good in the end." 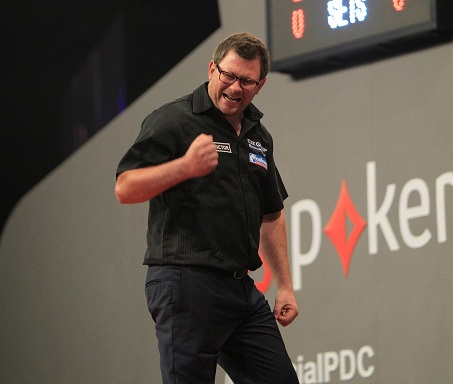 First Set 3-0 - Wade takes out 108 to win the opening leg - capitalising on a miss from Smith - before the left-hander doubles his lead by finishing 25 and then hits tops to win the set without reply.
Second Set 3-1 - Smith wins his first leg of the game with a fine 14-dart finish, which includes a 180 but also sees Wade score 180 and 177 to leave 24. Smith, though, misses two darts to win the second leg, with Wade finishing 76 on tops to capitalise before punishing another miss from his rival to move 2-1 up. The pair again trade 180s in leg four, which Wade takes on tops with a 13-darter to end the game with an impressive 94 average.
"I'm very pleased with that performance, it was good," said Wade, the world number seven. "I've been playing well for the last six or seven months - better than some players who have been winning tournaments - and I'm really happy with that." 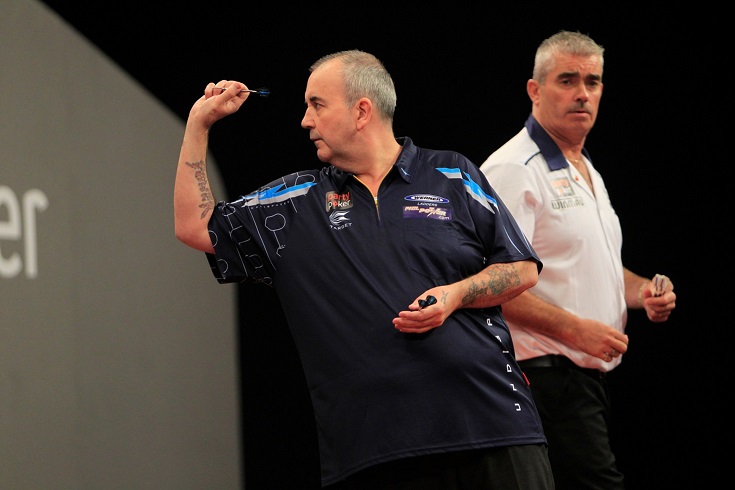 First Set 3-0 - Beaton lands a 180 but misses a dart at tops to win the opening leg as Taylor steps in on double 16. Taylor lands a 180 as he doubles his lead, before taking out 32 to win the third leg and seal the set.
Second Set 3-1 - Taylor misses four darts at double 16 and eight to finish the set's opening leg as Beaton sneaks in on double 16 to win his first leg of the game. Taylor, though, levels on double 16 before taking out 121 on double eight to move 2-1 up, before finishing 84 in two darts to secure a comprehensive opening win.
"The first round's always difficult but Steve didn't quite turn up tonight and I took advantage," said Taylor. "It was a difficult match and I kept Steve under pressure. I was steady but the second round's a longer format and I can relax a little bit now." 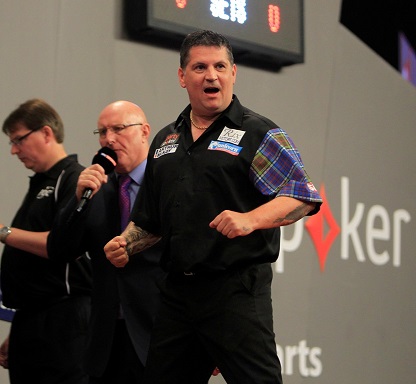 First Set 3-1 - Anderson starts well by winning the opening leg on double 14 but misses the bull to double his lead as Dolan levels on double 16. Anderson, though, finishes tops for a 2-1 lead before securing the set by finishing 64 on double four.
Second Set 3-1 - Anderson kicks off the set with a 160 before finishing 76 to win the opening leg in 11 darts, with Dolan levelling in 12 darts by landing a 160 with his first three darts and a 104 finish with his last three - but the Scot's response was clinical as he won the next two legs in 13 and 14 darts to seal victory with an impressive 98.54 average.
"Brendan came up on stage full of confidence but he never got going," said Anderson. "He's steady and Mickey will be the same on Wednesday - he's steady and a great player."

First Set 3-1 - Lewis makes a sensational start by taking out 160 to win the opening leg, and he adds double ten to move 2-0 up before Gurney finishes 100 to hit back. Gurney also lands a 180 in the fourth leg, but Lewis takes out 106 for the set.
Second Set 1-3 - Lewis' miss at tops allows Gurney to lead on double 12 before the number three seed's three misses in the next allow the Northern Irish star to finish 138. Double five sees Lewis hit back and he adds a 180 in the fourth leg, but Gurney posts a 177 in reply before finishing double eight to take the set.
Third Set 3-2 - Gurney takes out 86 to lead before Lewis takes out double top and double four to move 2-1 up - only to wire a match dart at the bullseye in the fourth leg as Gurney takes out double 16 to send the game into a sudden-death deciding leg. Gurney misses eight starting doubles, only for Lewis' misses at tops and with three darts on the double ten wire to give him a chance, but the Londonderry ace is crucially unable to finish the bull for a 170 finish or two further darts at double eight, allowing the Stoke star back in on double ten to finally seal his win.
"I thought I'd thrown it away at the end, but luckily Daryl missed," said Lewis. "I didn't expect what he threw at me and I was shaking like a leaf - Daryl kept me under pressure, took out a couple of great finishes and hit some good shots. Daryl's a fantastic player and we'll see plenty more of him, but I can take a lot of confidence from that win because I couldn't score much better than that and I had some good finishes."