SIMON WHITLOCK was eliminated from the Betway Premier League Darts with a draw against Wes Newton in Dublin on Thursday, as Phil Taylor secured survival at The O2 and Michael van Gerwen ended Peter Wright's unbeaten run in the event. 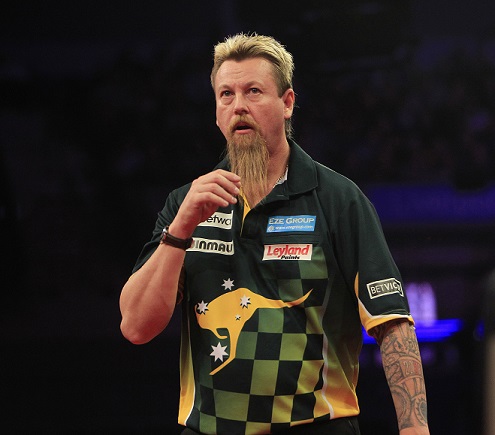 Australian ace Whitlock, the 2012 finalist, went into his eighth league match needing to claim victory to keep alive his hopes of survival into next week's Judgement Night.
But despite hitting five 180s, Whitlock was only able to pick up a draw as Newton claimed up a point which could be key to his own survival going into Week Nine.
Earlier, Newton had lost 7-3 to Gary Anderson as the 2011 Premier League Darts champion ensured his own passage into the final weeks of the event, where he will now set his sights on claiming a Play-Off place.
Anderson continued his strong form as he picked up the victory - despite being on tenterhooks with partner Rachel at home in Somerset and due to give birth on Thursday.

"I've been waiting for the phone call from home all day to be honest but the PDC's been great with my situation," said Anderson. "If I'd got a call then I'd have been on the next flight home and I've been on edge, so it's good to get the win. I'm enjoying the season and I can look ahead now to trying to get back into the Play-Offs. The hard work I've done in practice is paying off and my doubles are going in well, and it was great to give the fans plenty to cheer. Dublin's always been one of the best venues for me and the fans gave me a great reception."

Newton now faces a huge clash with Dave Chisnall in Cardiff next week, after being joined on six points in the league table by the World Grand Prix finalist after his draw with Adrian Lewis.
"It's a massive game against Dave now, and with Robert Thornton on six points too it's shaping up to be a really big night in Cardiff," said Newton, who played two matches in Dublin after missing the earlier league night in Exeter through illness. I'm disappointed to only come away with one point but Gary played well in the first game, and I had a lot of pressure in the second game, so I'm happy with the point and it's better than two points lost. Two points next week will keep me in the competition, so I've got to put this behind me and bring my best game to Cardiff."

Chisnall and Lewis shared ten 180s and four ton-plus checkouts in a thrilling contest, with the Stoke ace taking out 134, 124 and 100 only to see the World Grand Prix runner-up follow an earlier 158 finish by landing double 18 to snatch a draw in the deciding leg.
"I'm happy with that and it was good entertainment for the crowd," said Chisnall. "Adrian had a few chances but it's swings and roundabouts, and at the end he let me in and I took my chance. I wanted to try and get at least a point this week and it means there's a big game ahead against Wes next week. I know that a draw will keep me in the competition, but I'll be going for a win and hopefully I can hit my doubles like I did tonight."

Lewis said: "Dave ground out a draw at the end there but we both hit some good finishes and plenty of 180s, and it's a good point for me. I've got seven or eight weeks now to fight to get into the top four and I'm looking forward to the rest of the tournament now." 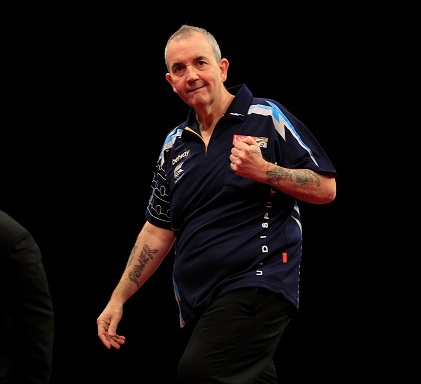 While Chisnall, Newton and Thornton - who sat out the Dublin night after previously doubling up in Exeter in Newton's absence - will all be battling to avoid elimination alongside Whitlock next week, six-time Premier League Darts champion Phil Taylor pulled himself out of the struggle with a draw against Raymond van Barneveld.
Taylor had found himself in the midst of the battle at the foot of the table after losing his opening three games, but secured survival as he came from 5-3 down to claim a point against his great rival.

"In some ways this felt like a win because I've qualified for the second half of the season and I can relax now and get ready for the next six or seven weeks," said Taylor. I know I can play better than I did here, but it's been very difficult this season and this game was no different because Raymond produced some fantastic darts and finished well. We had a lot of nerves out there but for me it's all about moving on now and trying to get into the top four."

Van Barneveld's point meant that he had to settle for a draw for a fourth successive week, although he remains in third place in the league table.
"It was a great battle and there's no disappointment," said van Barneveld. "After being 5-3 up and 6-4 down I thought I'd blown it but I'm happy with a point against the best player in the world. I've had four draws in the past four weeks and am the only player to have beaten Michael van Gerwen so far and I'm third in the table, so I'm very pleased." 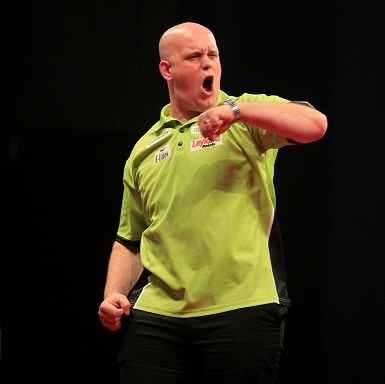 Away from the tension of the games involving players at the lower end of the league table, top two Michael van Gerwen and Peter Wright clashed as the Dutchman ended his rival's unbeaten start to the year in their rematch of January's World Championship final.
Showman Wright's attempt to play to the crowd when needing the bullseye to complete a 161 finish at two-all backfired as he missed and van Gerwen reeled off four successive legs. The Scot hit back to 6-5, but van Gerwen secured victory with a brilliant 128 checkout in the game's deciding leg to move two points clear of his rival in the table.

"He did a couple of things and I didn't like them," said van Gerwen. "Peter's a good player anyway but I didn't think he needed to do that, you should just play normal darts like Phil, Adrian or Raymond. There are a lot of people that like it, but I don't and that's my opinion. He doesn't need to do that, and he knew that I didn't like it and I'm very glad that I hit the 128 at the end and won the game."