PHIL TAYLOR claimed his second victory of the Betway Premier League Darts season with a 7-5 defeat of Dave Chisnall in Nottingham on Thursday, as Peter Wright continued his unbeaten start to the campaign against Simon Whitlock. 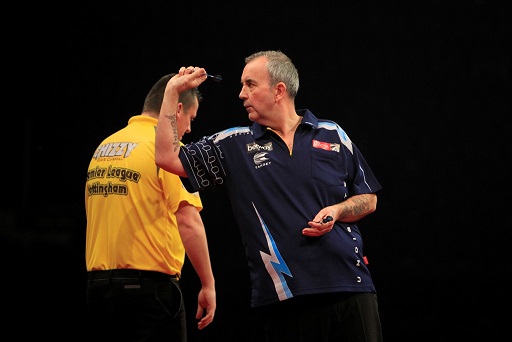 Taylor has found himself in the unusual position of being inside the Premier League's bottom two after losing four of his opening five games, but kick-started his campaign by seeing off Chisnall.
The six-time Premier League Darts champion hit a 122 finish for a 12-darter as he established an early 3-1 cushion, before Chisnall hit back to level with a key 14-darter. However, the World Grand Prix finalist could never edge ahead, as Taylor defied two 180s in a crucial 11th leg to move 6-5 up before punishing his opponent for missing the bull to grab a draw in the deciding leg by finishing double 16 for a 14-darter.
The win sees Taylor draw level with Chisnall on four points in the table, only one behind Robert Thornton and Wes Newton ahead of the final three weeks before Judgement Night, where the league's bottom two players are relegated.

"I know my form is picking up and this is great for my confidence," said Taylor. "Dave played well and hit some great 180s but missed a couple of doubles there in the last leg and let me in. I'm in a position I've never been in during my career and I've got to come out fighting. It's a cruel game and it's a very lonely place on stage, and if you're not firing then your nerves start jangling and everything starts going through your mind. It's been a difficult few weeks but I enjoyed this and I've got to go out there and do everything perfectly. That's the attitude you have to have now. For me to stay at the top I've got to work twice as hard as everyone else. We've been altering the grip on my darts each week and experimenting and we're getting there." 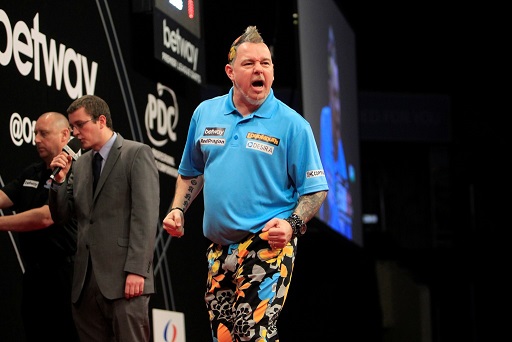 Taylor's win leaves Simon Whitlock two points adrift at the foot of the table after he suffered a fifth defeat of the season by going down 7-4 to Peter Wright, whose unbeaten run continued in style.
The World Championship finalist won the opening four legs without reply - hitting a superb 132 finish on the bull in that run - and though WHitlock hit back to 4-2 and also hit a 126 checkout during the game, Wright proved too clinical to claim the points.

"This was a great win for me," said Wright. "It was a dream at first to stay unbeaten but now I'm getting to the stage that I don't want to lose. I want to carry on trying to be unbeaten until at least the cut-off on Week Nine "I was practising my finishing hard after the UK Open at the weekend when I couldn't hit a double, and I changed my darts to try and score more, so there's plenty more to come with those darts - this was for starters. To be honest I didn't feel like I got out of first gear. I was just up there enjoying myself and enjoying the crowd, and if Simon stepped up I might have had to step up. It's good to know I've got more in the tank, especially with the guys I've got in the next couple of weeks; Raymond [van Barneveld], Gary [Anderson] and Michael [van Gerwen]." 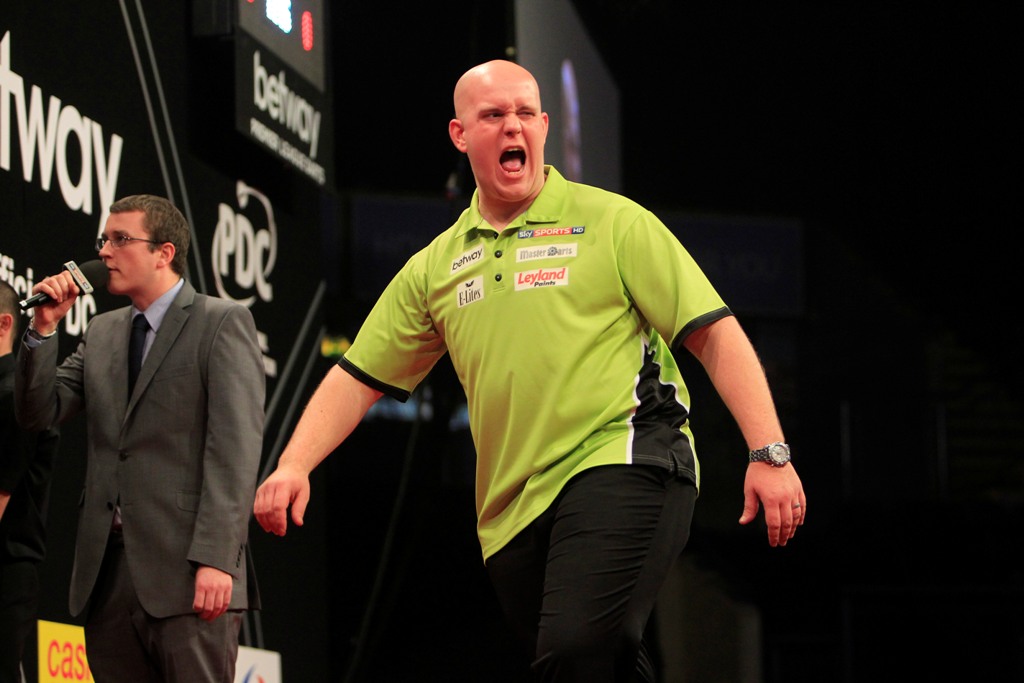 Reigning Premier League Darts champion Michael van Gerwen remains just a point behind Wright after producing arguably the best performance of the season so far to defeat Wes Newton 7-1.
Van Gerwen averaged 105 and hit six 180s as he stormed to victory, although Newton - on his return to action after tonsillitis - averaged 103 in reply but paid the price for missing nine of his ten darts at a double in the game.

"I'm very happy with this performance," said van Gerwen. "I think Wes produced his best performance of the Premier League this season but I wanted to put a good performance in and show everyone that I'm still in form and I did that. I felt really relaxed on stage and my first dart was going in the treble every time, and you saw what I can do tonight. I did well on my scoring and the first nine darts of each leg was amazing, but I got the result. I'll get a lot of confidence from this and when you're confident you play well."

Raymond van Barneveld sits third in the league table on eight points following his draw with Thornton in Nottingham, with the Dutchman finding himself 6-5 down before snatching a point for the second week running in the deciding leg.

"It was like last week against Dave Chisnall and at the end I almost gave it away again, but Robert let me in and otherwise I was going away empty-handed," said van Barneveld. My finishing helped me get the point but I'm not happy with my scoring, but I'm happy with a point. It's a fantastic competition so far this year and everybody can beat each other, so you have to be focused every week. It's a tough schedule for the next few weeks and this could be an important point for me."

Adrian Lewis moved up to fourth in the table with his third victory of the season as he edged out 2011 Premier League champion Gary Anderson 7-5 in another see-saw contest.
Lewis led 4-1 early on, only for the Scot to win the next four legs to move in front, but Anderson paid the price for missed doubles in the tenth leg as the new UK Open champion levelled before also wasting his chance to grab a point with a further four misses in the decider.

"I started like a train but before I knew it I was fighting for a draw," said Lewis. "I was dominating the game but I had a bit of luck at the end and can move on to next week now. It's been a really tough week and winning the UK Open was hard because you have a couple of days off and then need to prepare for this, so I wanted to make sure I took something tonight. The point puts me in fourth position at the minute and I'm looking good to qualify for the second stage, and hopefully I can kick on and get another win next week now."