The fight for places in the Betway Premier League Darts Play-Offs will go to the final league night after Phil Taylor drew with Peter Wright and Gary Anderson defeated Dave Chisnall in Newcastle on Thursday.
With top two Michael van Gerwen and Raymond van Barneveld already assured of Play-Off places, a trio of stars were continuing their battles to secure a top-four finish at the Metro Radio Arena. 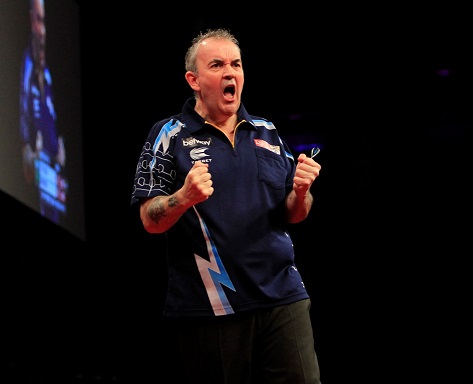 Taylor could have secured his Play-Off place with a win over Wright in their clash, but was left to rue one missed dart for victory in the deciding leg as the colourful Scot claimed a draw.
Taylor trailed 1-0 and 4-3 to the World Championship runner-up, but wrestled back the lead with a brilliant 11-dart leg and finished a 14-darter to claim a point before Wright shared the spoils in the deciding leg.

Six-time Premier League Darts champion Taylor had lost his opening three games this season before recovering to break into the top four, and admitted: "I'm making it hard work for myself but I'm enjoying it at the same time. We were both a bit edgy tonight and it was a tough match but I had my chances. I think we both knew what this game meant and we were playing for survival and to try to stay in the competition, so a point it's too bad for me. It's up to me to get a result next week and it's nip and tuck, but it's going to be interesting next week against Robert Thornton. A draw might get me in but I'll be trying to win the game and I'll be putting the hard work in because I've got no choice."

Wright will now face Michael van Gerwen in their final league game at The Brighton Centre next Thursday, and remains in determined mood despite sitting a point behind Taylor and Anderson.
"I won't give up on this," he said. "I've earned my place in this tournament I'm going to fight all the way to try and get into the top four. I'm trying to fight in every single leg. I'm not playing as well as I know I can, but I'll be practising loads and hopefully I can produce my best darts next week and get a win." 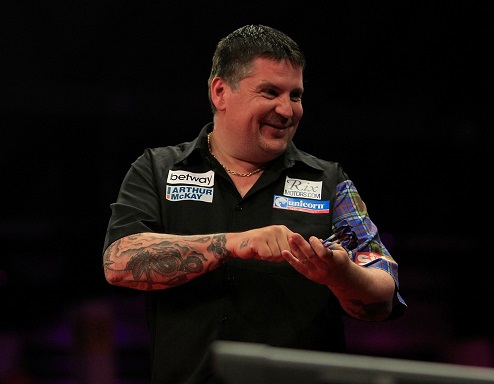 Anderson, meanwhile, claimed his eighth win of the season as he jumped into fourth place above Wright with a 7-4 defeat of Chisnall, with the pair sharing the first six legs before the 2011 champion won four of the next five to pick up the points.
"It's great to get the win and I'll want to win next week to make sure I'm in the Play-Offs, but it's good that it's in my hands," said Anderson, who meets van Barneveld in Brighton. I was a bit nervous tonight and we both struggled on our doubles a bit early on there, and if I'd hit my doubles first then it would have made the game a whole lot easier for me. Dave had nothing to lose tonight but he had an off night on his doubles. If he tidies up on his doubles he could be unbeatable and he's unlucky not to be in the top four himself with some of the darts he's thrown this year."

Van Gerwen won the clash between the league's top two players with a 7-4 defeat of Dutch rival van Barneveld, putting the reigning champion in pole position to finish at the top of the table for a second successive season.
Van Barneveld produced some superb early darts, including an 11-dart leg, as he established a 3-1 cushion, only to see the World Champion roar back with four successive legs as he moved two legs up.
Van Barneveld replied with a 96 finish to cut the gap to 5-4, but van Gerwen finished 68 on tops to win his sixth leg before taking out 132 on the bull to end the game with a 105 average in a superb display.
"It was a great finish to win the game and it brought back memories of taking out 132 to win the Play-Offs final last year," admitted van Gerwen. "At the beginning of the game I made it difficult for myself but I was the better player overall. It was a huge game between us because we both want to be top of the table, and I'm very happy to be top. It was also important because it was live on Dutch television, and it would mean a lot to me to finish top again. I want to win again next week to make sure that I do finish top, because it says that you've been the best player for 14 weeks, but then I want to win the Play-Offs too."

The night's other game saw reigning UK Open champion Adrian Lewis pick up his first win in nine matches as he secured sixth place in the table with a 7-5 defeat of Robert Thornton.
The Scot, who won both Players Championship events held in Wigan last weekend, led 2-0 early on only for Lewis to produce some sparkling darts before sealing the victory with a 13-darter in the deciding leg.
"I had a dip in form for about four weeks which cost me the Play-Off place, but it's coming back," said Lewis. "I've made sure that I can't finish any lower than sixth but I'll be going out there to try and finish with a win next week. Robert wired a couple of doubles which could have seen him get something from the game and maybe he was a bit unlucky, but I'm pleased with that."

The Betway Premier League Darts league season concludes next Thursday at The Brighton Centre, before the top four players progress to compete in the Play-Offs.
Chisnall meets Lewis in the night's opening game, before Anderson takes on van Barneveld and Taylor plays Thornton, with the night's final contest being a repeat of January's World Championship final between Wright and van Gerwen.