PHIL TAYLOR moved up to third in the Betway Premier League Darts table as he picked up three points in Birmingham on Thursday night - but Adrian Lewis and Dave Chisnall saw their Play-Off hopes ended at The NIA. 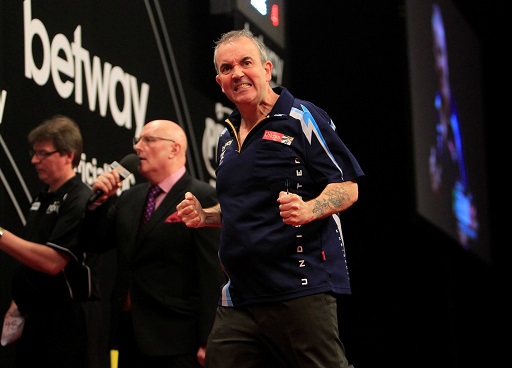 Six-time Premier League champion Taylor extended his unbeaten run to nine matches as he drew with Raymond van Barneveld before defeating Chisnall 7-2 as he doubled up in Birmingham.
The three points put Taylor up to a season's best third place in the table, a point ahead of Peter Wright and Gary Anderson going into the final two league nights.

"I'm really pleased to get three points tonight," said Taylor. "I wanted four points coming here tonight but I would have taken three all day long, and I'm in there in the top four with a chance of qualifying. I was practising brilliantly tonight but then I went up on stage against Barney and got nervous because I'm fighting for my life and I knew I was in for a tough game. Raymond's been remarkable during this Premier League and he's blown everyone else away, and he's up there at the top of the table. Against Dave I didn't feel nervous but I didn't click as well as I can, but I got a good result. There's five players who can qualify for the four places and it's a race for the ticker-tape now, so the pressure's on and everybody's going to push forward." 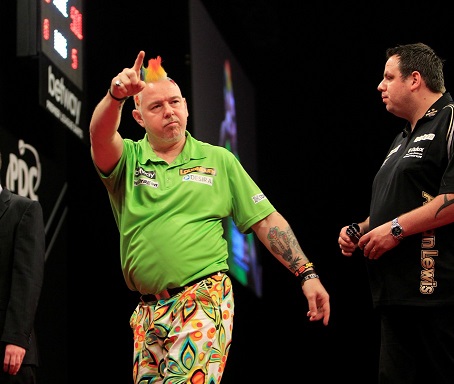 Wright remains inside the top four, ahead of Anderson on Leg Difference, following his draw with Adrian Lewis - as he hit back from 6-4 down to claim a point with a 12-dart finish in the game's deciding leg.

"It's another point and I'm still fighting to try and qualify for the Play-Offs," said Wright. "I was a bit disappointed in my game tonight because I expected to come out and blow Adrian away, but that's how it goes sometimes. I'd been playing really well in practice and I expected to perform better on stage, but next week's another great chance when I play Phil in Newcastle and I'm already looking forward to that." 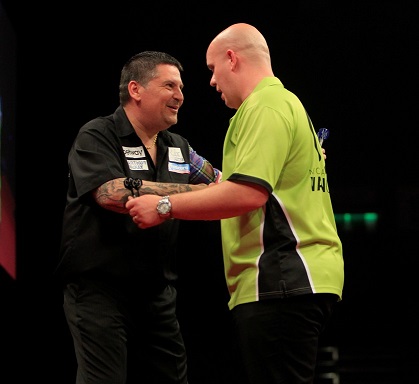 Anderson, meanwhile, joined Wright on 16 league points with a fine display as he defeated league leader Michael van Gerwen 7-4, as the reigning champion suffered only his third defeat of the season.
The 2011 Premier League winner took five successive legs as he moved into a 5-1 lead, and though the World Champion hit back, Anderson had enough cushion to secure both points to keep him in the hunt for a top-four place.

"I've got two games left that I've got to win and I'd love to make it into the Play-Offs," said Anderson. "I won the Premier League in my first year, and to win this again would be the icing on the cake after a couple of difficult years. This was the usual scenario for me - I got in front and then lost a couple of legs that I shouldn't have lost, but I got there in the end. Losing to Michael in the World Championship was a kick up the backside for me and it made me want to get back up to the top, and I'm doing well. I love shutting the critics up and I'm not quite finished yet!"

Van Gerwen's defeat allowed van Barneveld to draw level with his fellow countryman on 20 league points as he shared the spoils with Taylor.

"Against Phil, if you were offered a draw before the game you'd probably take it and it takes me onto 20 points and I'm happy," said van Barneveld. "Neither of us were at our best and I never felt comfortable, so I'm pleased to get a point. Maybe a point was a fair result but I missed three crucial doubles in the tenth leg and if one of them had gone in I might have got the win. I'm still up there and I'm unbeaten for 11 weeks now, and I'm still focused on trying to make the final. I'm going to keep working hard and I want to keep playing well." 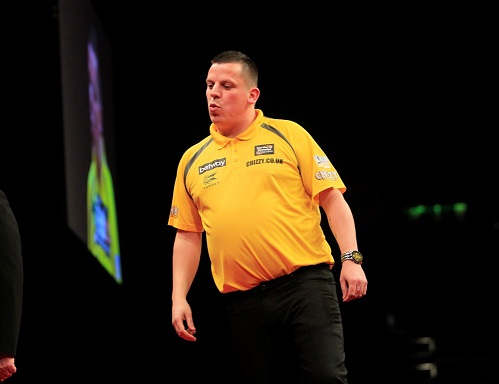 The night had begun with a 7-5 win for Robert Thornton over Chisnall, as the Scottish star - who was also out of contention for the Play-Offs after suffering four successive losses recently - hit nine 180s before claiming a narrow win.

"I can't make the top four but I want to finish as strongly as I can, and this was a great win," said Thornton. "I felt really comfortable and I don't want to make it easy for anyone else to make the Play-Offs against me. I love this tournament, it's absolutely brilliant and you're up against another nine top players, so I'm not too disappointed with how it's gone. I've lost a lot of games 7-5 but it's only been the odd missed double here and there which has cost me, and if I can tighten that up in the last two weeks I could cause Adrian Lewis and Phil Taylor some trouble!"