Reigning Premier League champion van Gerwen claimed his ninth win of this season as he swept to a 7-4 win over Dave Chisnall at the Phones 4u Arena.
The Dutchman had found himself 3-2 and 4-3 down, before winning four successive legs to pre-empt Friday's 25th birthday with a victory to all but secure his Play-Off place.

The World Champion would need to lose his remaining three games to possibly drop out of the top four, and said: "I'm very happy with this win. I didn't play my best game and neither did Dave, but it was an exciting one and I managed to get the job done. Another win takes the pressure off me and I'm really pleased - but I want to keep this up now and stay at the top of the table." 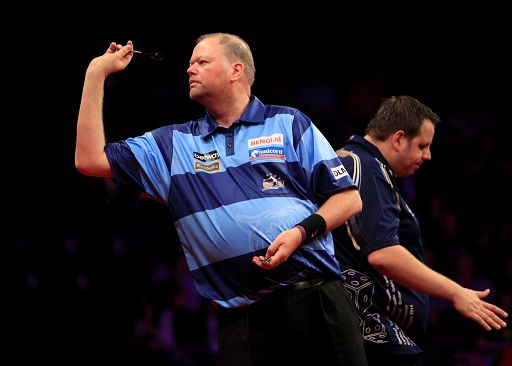 Five-time World Champion van Barneveld, meanwhile, remains a point behind his fellow Dutchman after he enjoyed a 7-3 win over Adrian Lewis, who has now lost four successive games to slip four points away from the top four.
Van Barneveld averaged 104 in a dominant performance, which included an 11-darter to seal victory and extend his unbeaten run to 11 matches.

"I'm really pleased to have won tonight," said van Barneveld. "Every week you have to be focused and concentrate so hard because this event is awesome and every player is fantastic. This looks like a comfortable win but it wasn't, even though Adrian didn't play his best darts. I'm happy with my game at the moment and to be on 19 points, I feel like I'll be in the Play-Offs now. It's a big achievement to make sure I'm in the top four, but I don't want to relax and I want to stay at my best in the next few weeks." 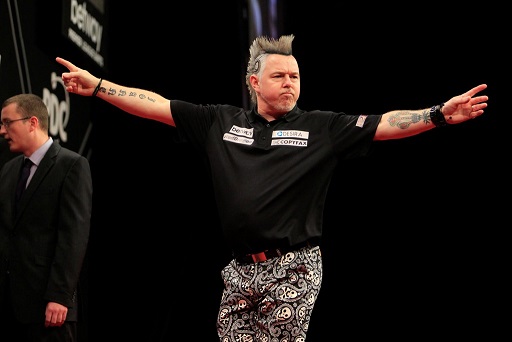 Peter Wright ended his three-game losing run with a 7-5 win over Robert Thornton in the night's opening game, as he consolidated third place in the league table.
Thornton hit seven 180s in the game, but crucial misses at tops throughout cost him dear after taking out finishes of 137 and 117 to lead 2-1 early on. Wright took out 121 in a run of three legs as he moved 4-2 up, and crucially finished 71 on the bull to lead 5-4 before Thornton hit back on double ten to level and send the game into a decisive final two legs.
Wright hit a 180 and double ten to break throw and secure at least a point in the 11th leg, and when Thornton missed two darts to claim a draw, Wright posted double eight for a win which consolidates his top-four spot as well as ending his opponent's Play-Off chances.

"I've not been on my game for the last couple of weeks so I knew I needed a win out of that, and a couple of good legs proved the difference," said Wright. "I've changed back to my old, old darts - that I was using last year - and they did the trick because I wasn't consistent enough. My scoring was better tonight and I finished well too, and that was the key. This was a good win and hopefully with another week's practice I can improve again for the last three games."

Wright now sits a point above Phil Taylor and Gary Anderson, who are locked on 14 points following the league night in Manchester.

The pair drew their league game in Manchester, as Anderson hit back from 3-1 and 5-4 down to claim a point, before the 2011 champion also shared the spoils with Thornton in their second match of the night.

"It's not a bad night for me and I see that as two points gained," admitted Anderson. "In the second game, against Robert, I made a mess of it and gifted him a point. I felt like I threw the win away but the table's still wide open and I'm neck and neck with Phil and hot on Peter's heels, so it's set up nicely for the last few weeks." 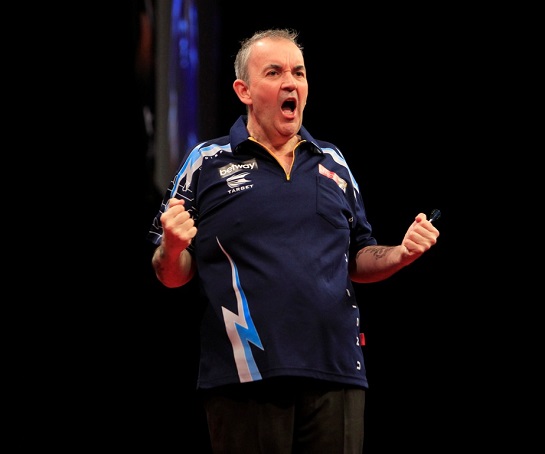 Taylor, meanwhile, had followed his German Darts Masters victory over the Easter weekend in Germany with a point to extend his unbeaten run to seven matches.

"Gary put me under pressure and kept hitting back after I got in front," said Taylor. "My focus is getting into the Play-Offs and this is another point towards that, so I'm happy. Next week I play twice so it's make or break for me, but I'm excited and looking forward to it."

The visit to The NIA in Birmingham next Thursday sees Taylor compete twice on the night, as he faces old rival Raymond van Barneveld before meeting Dave Chisnall later in the evening.