A DRAMATIC win for Wes Newton over Gary Anderson in Glasgow on Thursday night means that four players will battle to avoid relegation from the McCoy's Premier League Darts on Judgement Night.
The bottom two players in the Premier League table following next week's ninth league night in Brighton will be eliminated from the tournament - and wins for Newton and Adrian Lewis at the SECC blew the relegation race wide open. 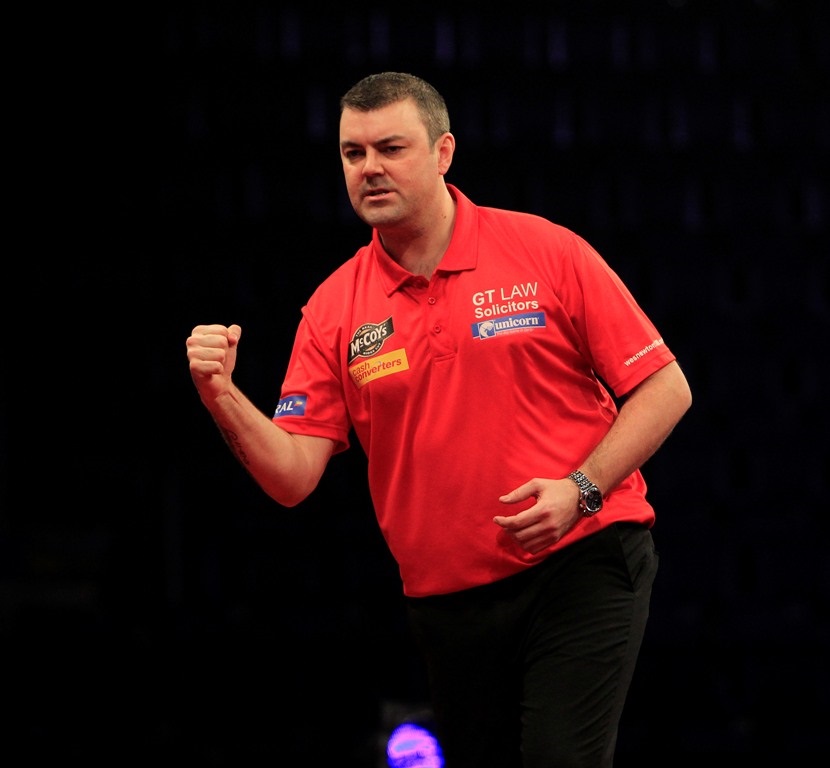 Newton came from 5-4 down to take a 7-5 win over 2011 Premier League champion Anderson, who missed 24 darts at doubles during the game as he slipped to the foot of the table.
Newton jumped above the Scot on Leg Difference, with Simon Whitlock's defeat to in-form Robert Thornton leaving the Australian only a point above the pair.

"I rode my luck a bit tonight," admitted Newton. "Gary scored well but he didn't finish well and he let me in, and I took my chances. I'll take the two points because I've lost games which I should have won this season and I'm still in the hunt - it's all to play for next week now!"
Newton had received a cortisone injection in a long-standing shoulder problem on Tuesday and admitted: "This was the best it's been since October and I was pain-free for the first time in a long time, and hopefully I can get back to my best now."

Anderson conceded: "I was hitting trebles for fun and couldn't buy a double, and I'm as sick as a pig! I'm playing well in practice but I can't hit a double on stage and it's been the story of my season, and the more I'm missing, the more I panic."

Whitlock went down 7-1 to a sensational performance by Ayrshire's Robert Thornton, who averaged 107.65 in ensuring that he cannot be eliminated as he picked up a third victory in his debut season.
The Scot won the first four legs without reply in front of his home fans at a sold-out SECC - hitting 180s in the first three and a 157 checkout in the process. Whitlock took out 114 to hit back, but Thornton landed a maximum in moving 5-1 up, a 121 finish to pull clear and double 12 to seal the win.

"There's not many people who will beat Simon 7-1 because he's one of the hardest and steadiest players you'll come up against, and I had to put in a performance like that to do it," said Thornton. I'm absolutely loving the Premier League and it seems to be bringing the best out of me, so long may it continue!"
The UK Open champion added: "To be safe from relegation and to play in front of a crowd like this makes everything worthwhile - it was amazing. It's brilliant, one of the most memorable nights I've ever had. I wanted to go up there and not let the Scottish fans down, so it's great to play so well. I was pretty focused and I'm chuffed to bits with how I played. I've had loads of family and friends here watching and it's the first time my mum's seen me play live, so I'm very proud."

World number two Adrian Lewis moved up to seventh place by extending his unbeaten run to four matches with a 7-4 win over Andy Hamilton.
Lewis had lost his first four games but is now unbeaten since, as he came from 2-0 down to claim a fine win - which featured a key 124 bullseye finish in the penultimate leg.

"After four weeks I didn't think I'd make it to the latter stages but I've got a great chance now," said Lewis. "As soon as I had to fight for my life, I've been pulling something out of the bag. It was a really tough game tonight but I'm delighted to get the win. Seven points isn't enough yet to avoid relegation, though, so I'll focus on playing Raymond van Barneveld next week in Brighton."

Van Barneveld, meanwhile, was defeated 7-3 by Phil Taylor as the reigning champion continued his return to form with a second successive victory as he ended a four-week trial with a new design of darts by going back to the style with which he won the World Championship in January.
Taylor took the game's first three legs - twice punishing missed doubles from the Dutchman - and led 6-2 before van Barneveld took out a superb 144 finish to stay in the contest. However, two further misses from the Dutchman allowed Taylor in to secure the victory with a 72 finish, ending any slim chance of him being dragged into the relegation dogfight as he became one of four players locked on ten points at the top of the table.

"I tried the new darts but they didn't quite work for me," said Taylor. "They were great in practice but not on stage and I went back to what I'm comfortable with tonight, and it worked "I was really nervous before the game and there was a lot of pressure on us both. Barney's a brilliant player and he hit the 180s at the right time, but he couldn't quite hit his finishes tonight - apart from the 144, which was brilliant!"

James Wade's fine 7-4 win over Michael van Gerwen in a high-scoring contest saw him join the Dutchman, Taylor and van Barneveld on ten points in the league table.
After van Gerwen took the game's opening leg in 12 darts, Wade hit two 180s in a 12-darter to level and hit legs of 11 and 12 darts in moving 3-1 up, also hitting a 134 checkout. The 2009 champion also led 4-1 before van Gerwen hit back to within a leg, but Wade took out finishes of 135 and 130 as he swept to victory by hitting seven doubles from 11 attempts in the game.

"It was a good win for me," said Wade. "Everyone knows the form that Michael's been in but mine has been picking up and nobody scares me. I'm putting the work in this year and it's showing in my performances. This game is all about finishing and that's been my strength again."

The McCoy's Premier League Darts will continue next Thursday with Judgement night at the Brighton Centre, which will see the final five games played before the ten-player event sees the bottom two relegated.
Lewis will open up against van Barneveld before Taylor faces Thornton in the only game which cannot affect the elimination battle. Newton then meets Hamilton and Anderson takes on Wade, before Whitlock faces van Gerwen in the night's final clash.