PHIL TAYLOR, Michael van Gerwen, Robert Thornton and Raymond van Barneveld are locked at the top of the McCoy's Premier League Darts table after picking up points in Exeter on Thursday, as Wes Newton left Adrian Lewis marooned at the foot of the standings.

Wins for van Gerwen, Thornton and van Barneveld saw them join Taylor on six points in the leauefollowing the fourth league night, which saw reigning champion Taylor draw with 2009 winner James Wade at the Westpoint Arena. 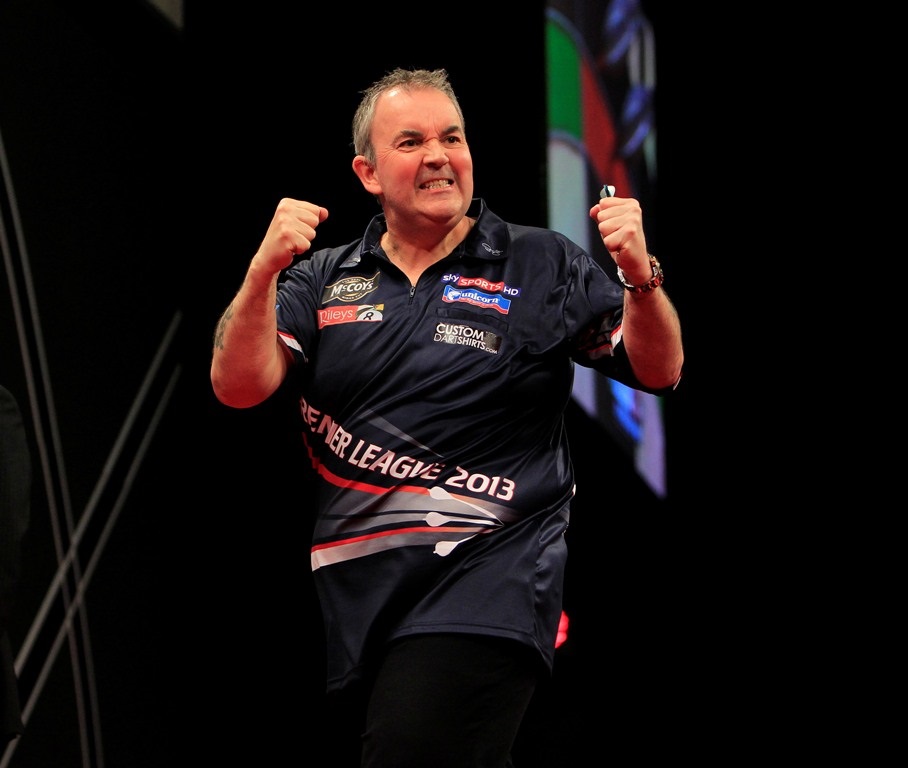 Both Taylor and Wade averaged over 100 in a superb contest, with the Stoke great using a brand new set of darts but showing all his quality in taking a 6-4 cushion before the left-hander hit back by winning the final two legs to secure a point.

"I fancied a change of darts and I got these darts on Wednesday," revealed Taylor. "I like the darts, they feel good and they're nice, so with a bit of match practice in the next couple of weeks I'll improve, but I'm pleased with a draw. tonight. James took out a couple of great finishes, especially the 80 at the end to get a draw, but I enjoyed the game and I'm loving every minute of the league."

Wade's draw sees him move onto five points in the league table to continue his strong start to the season, and he admitted: "It's a good point and I'm happy with that.I didn't think as well as my average shows, but I felt I had bundles more to come out, and I know it will come out eventually. I used to say that you don't need to practice but in the last three months I've learned to do that. I'm more confident in myself and I believe that I can contest this title. I felt I threw five bad legs and I've still come out with a point, and I'm enjoying it at the moment."

Taylor sits at the head of the table ahead of Dutch rival van Gerwen, who powered to a 7-2 win in his clash with Andy Hamilton, hitting five 180s in the game's final six legs to remain unbeaten in his debut Premier League season.

"It's a very important win because Andy's always very tough to play against," said van Gerwen. "It's a difficult game because Andy's a slow player and I'm a fast player, but I did my job very well tonight and got the win. In the first leg I couldn't find my rhythm and after that I think I played quite well and I enjoyed myself. I've not lost a game yet and that's great for me. I just want to keep winning my games and to get to the semi-finals in May." 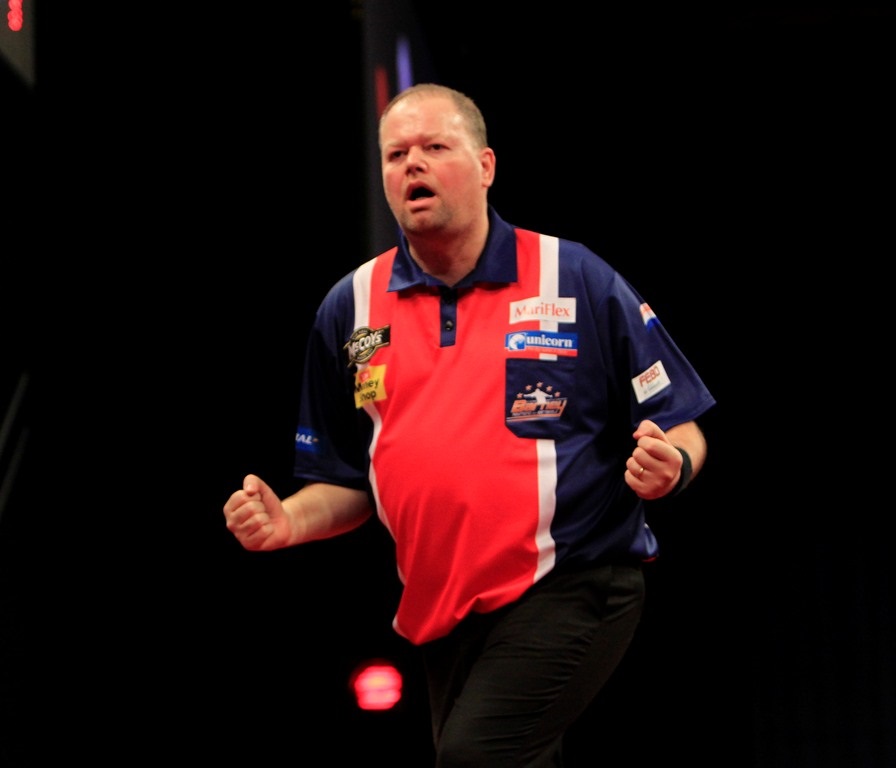 Grand Slam of Darts champion van Barneveld sits behind Taylor and van Gerwen on leg difference after he defeated Simon Whitlock 7-3 in their clash at Exeter's Westpoint Arena.
Whitlock hit six 180s in the game, but van Barneveld took out a key 104 finish in hitting half of his darts at a double as he picked up a third victory of the season.

"I'm really pleased with the win tonight," said van Barneveld. "I hit some crucial finishes there and I'm really happy with my finishing. It's tight in the league table but I think any player would take three wins from their first four games, and I'm targeting a place in the semi-finals. It's definitely the best Premier League ever and I like the new system."

Robert Thornton joined the trio on six points as he continued his impressive start to his first Premier League season with his record televised average of 109.33 as he won his all-Scottish clash with Gary Anderson 7-2.
Thornton landed a ten-dart finish in a sensational display, with Anderson being restricted to only two darts at a double - as he took out finishes of 124 and 104 - during the contest. "I'm speechless," admitted Thornton. "It's amazing to come up here and play like that, but I'm loving being in the Premier League and it's an honour to be in this competition. It's the best I've ever played but I knew I'd have to be good against Gary because he's such a phenomenal player and his scoring is so good. I had to hit the ground running but it turned out I was sprinting!" 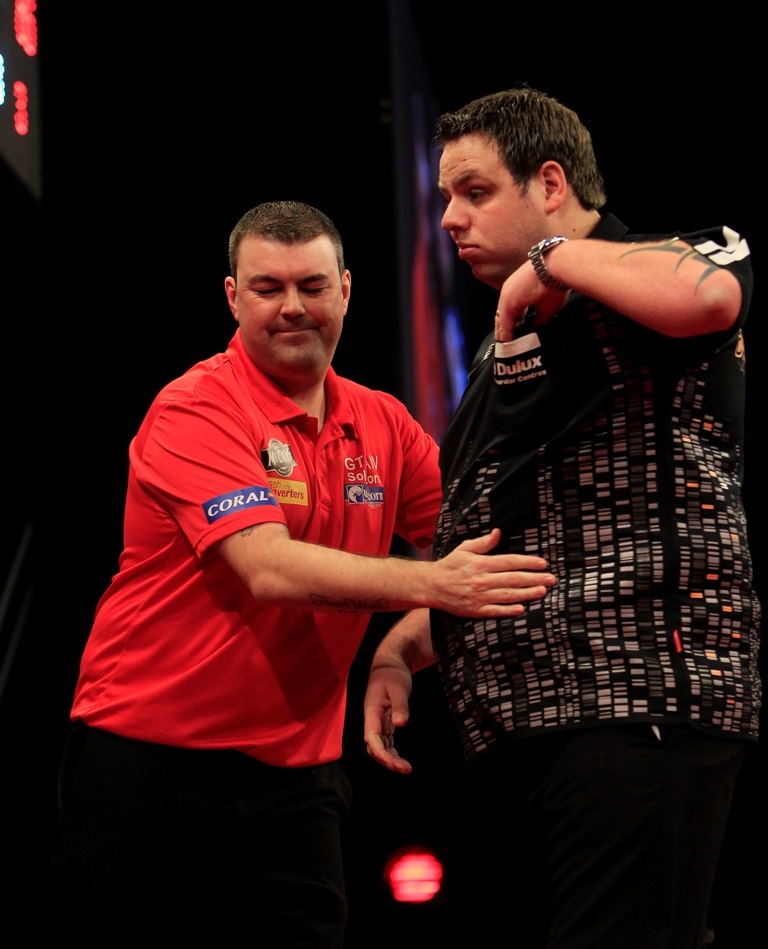 The night's other game saw Wes Newton leave two-time World Champion Adrian Lewis two points adrift of Anderson at the foot of the league table, defeating the Stoke ace 7-3. Newton recovered from a shaky opening to win four successive legs in taking a 4-1 lead, and he went on to close out his first Premier League victory.

"That's the most nervous that I've ever been going into a match and it was a massive game for both of us, so I'm very thankful to get the win," said Newton. "That's not the Adrian Lewis that everyone knows and I could see he was struggling, but I was trying so hard. When I got to six legs and Adrian pulled it back to 6-3 I was having flashbacks to when Robert Thornton grabbed a draw last week, so I'm pleased I managed to finish Adrian off there." The McCoy's Premier League Darts will visit Nottingham's Capital FM Arena next Thursday for the fifth league night, with the impending prospect of the bottom two players following nine weeks being relegated drawing ever closer.