Gary Anderson delighted the Aberdeen crowd with his first McCoy's Premier League Darts victory of 2013 as he edged out Simon Whitlock on Thursday night, as Phil Taylor, Raymond van Barneveld, Michael van Gerwen and Robert Thornton continued their unbeaten starts to the season. 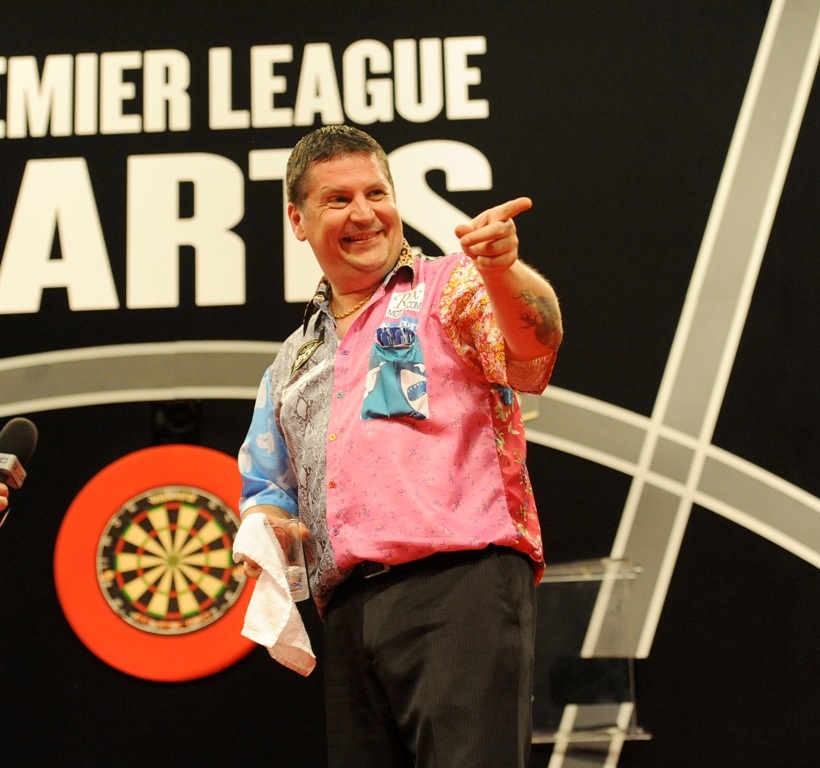 2011 Premier League champion Anderson bounced back from his opening-night loss to Raymond van Barneveld with a 7-5 defeat of Whitlock in a thriller in front of a sold-out 4,000 crowd at the AECC. Whitlock led 2-0 and 3-1 early on before Anderson reeled off five successive legs to ensure that he would take at least a point when he moved 6-3 up.
Whitlock took the next two to force a deciding leg as Anderson missed a handful of match darts, but the Scot regained his composure to land double 12 and seal a narrow victory.

"I couldn't stop shaking in the final leg but I'm delighted I got the win," said Anderson. "When I was 3-1 down I felt like I should have been 3-1 up and it's starting to get on my nerves! "I'm snatching my doubles up on stage at the moment but in practice I feel fine and my scoring's great. If I'd hit my doubles first time that would have been a lot more comfortable and it's frustrating for me. It's nice to have two points on the board already and especially so in front of the Scottish crowd - they were brilliant and they never stopped singing. It was fantastic and I think I had goosebumps right until the final leg." 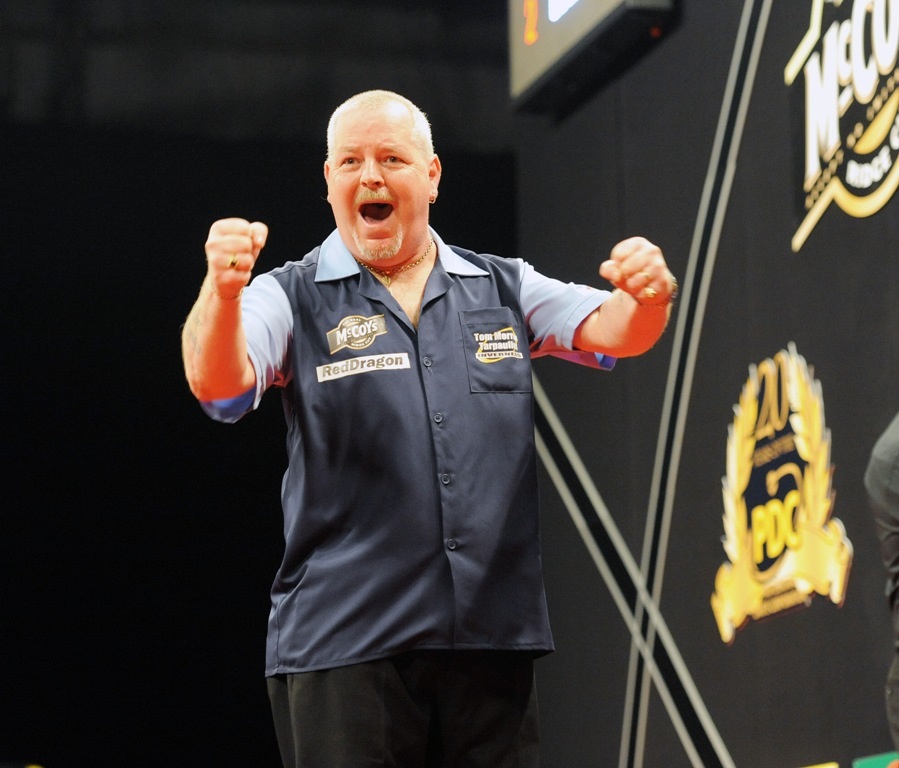 Anderson's fellow Scot Robert Thornton had to settle for a draw with Michael van Gerwen as he continued his unbeaten start to his debut Premier League season.
Thornton and van Gerwen shared a thriller in Aberdeen but neither player was unable to break throw as they shared the spoils - although the UK Open champion was left to rue a missed double ten for a 140 checkout in the decider before the Dutchman grabbed a point.

"That last dart at double ten was right on the wire but I think a draw was the right outcome," said Thornton. "We knew we'd have a great game and we produced that too. I was pretty relaxed but I didn't want to let the Scottish fans down. Michael's a phenomenal player and he's the man in form, and you know what you've got to do against him. We both had darts to break each other's throw, but it wasn't to be. The bookies have got me down as one of the favourites to be knocked out [after nine weeks] but I'll prove them wrong, and I'm just here enjoying myself and I'm third at the moment."

Reigning champion Phil Taylor swept past world number two Adrian Lewis with a 7-3 triumph to join Thornton on three points in the league table.
Taylor had drawn with Michael van Gerwen in their opening game of the season a week ago, but after sharing the opening six legs against Lewis pulled clear by taking four in a row for the spoils.

Taylor had partnered Lewis to victory in the World Cup of Darts pairs event only a fortnight ago, and admitted: "It was hard to get the killer instinct so I'm glad to get the win. "I started a bit slowly and we gave each other a lot of respect, and having played pairs together recently and practised a lot together it was hard to play against him. It's good to get a win and every point will be vital because of the relegation after nine weeks. It eases the pressure and I can hopefully start to pick my form up now." 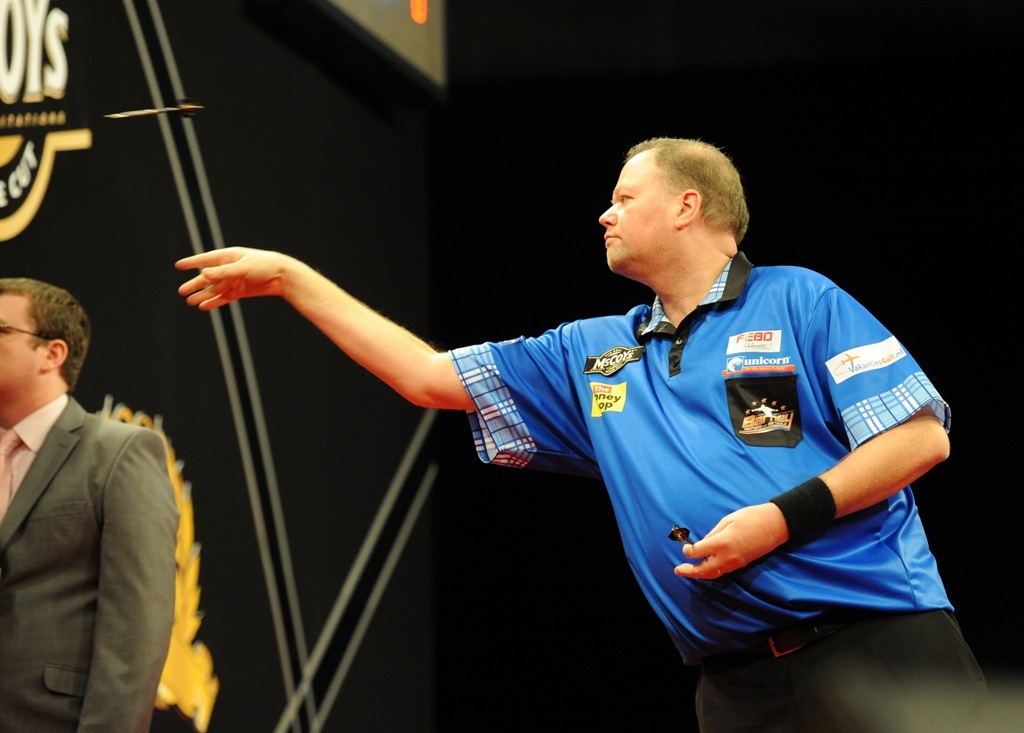 Raymond van Barneveld, meanwhile, tops the table after two weeks following his second successive victory, as he averaged 100 in an impressive 7-2 victory over newcomer Wes Newton. Van Barneveld hit three ton-plus finishes during the game and won six of the opening seven legs as he set up a comfortable triumph.

"I've been working hard and it's paying off for me," said van Barneveld. "I'm very happy with the win and to win 7-2 could be important for my leg difference later in the season. The big finishes were crucial because Wes was waiting on a finish and it hurt him, so to see them go in was great. It's a really good start to the season and I'm enjoying my game."

Andy Hamilton was the night's other winner as he saw off 2009 champion James Wade 7-4. Hamilton took the game's first five legs to assume command, and though Wade hit back to cut the gap to 6-4, Hamilton landed double 16 to pick up his first win of the season.

"The two points is great because it gets me off the mark and I can kick on from here now," said Hamilton, who finished 64 percent of his chances at a double in the game. "I finished well early on and you have to take advantage when someone isn't playing well, which I did. These players have the ability to come back and the game's not over until the final double's hit. Getting the two points is the only thing that matters but it's a relief to get some points. You don't want to keep going each week because you end up trying too hard, so I can relax a little bit now."