MIGHTY Michael van Gerwen crowned his debut McCoy's Premier League Darts season by claiming the title in sensational fashion by coming from behind to defeat reigning champion Phil Taylor 10-8 in the final at The O2 in London. 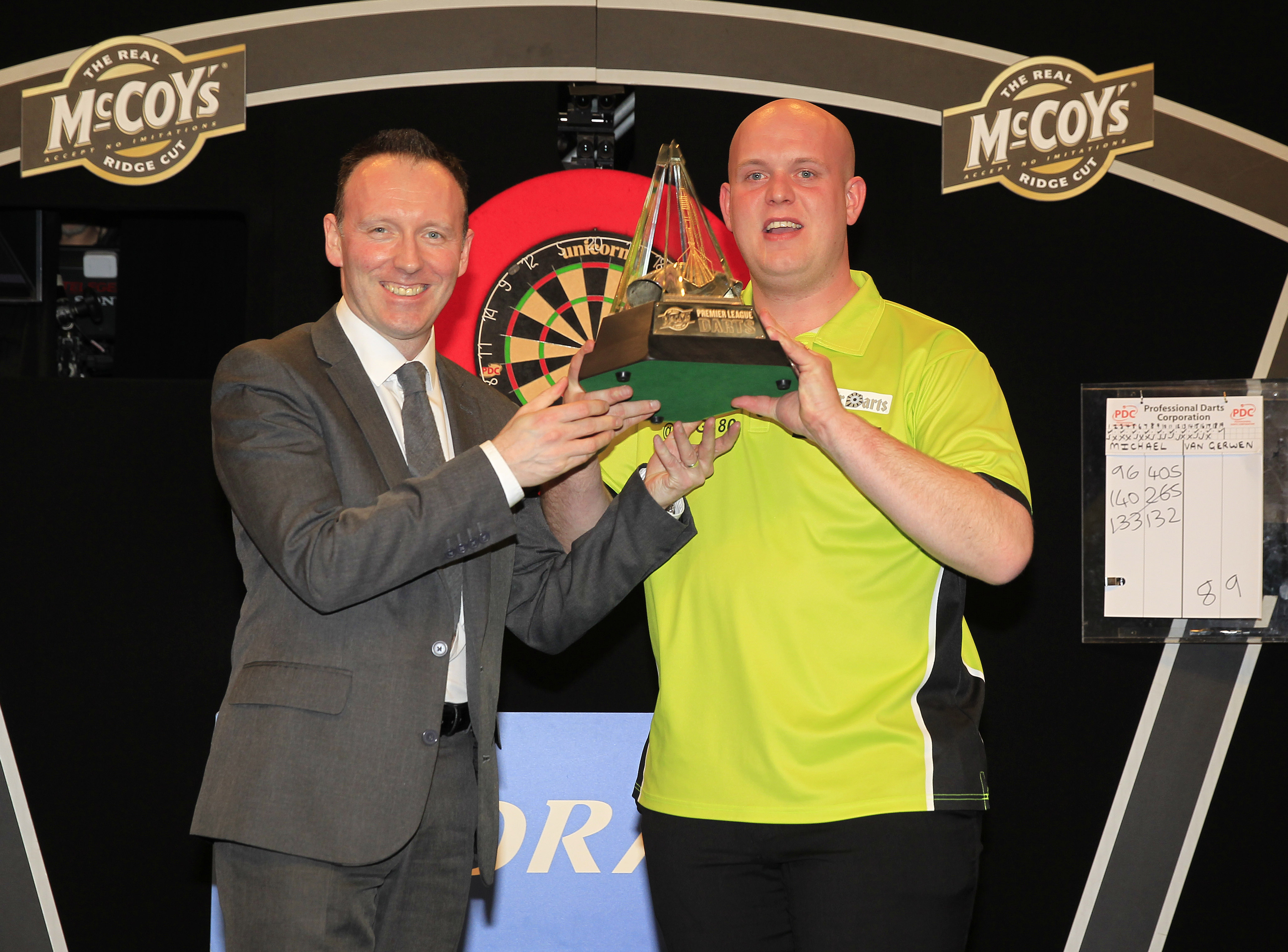 Van Gerwen has enjoyed a superb first year in the tournament, finishing at the top of the league table following the 14 weekly rounds before emerging triumphant in the Play-Offs to claim the 150,000 pound title.
The 24-year-old Dutch ace firstly overcame James Wade 8-4 in the semi-finals, taking leads of 5-1 and 7-2 before holding off the 2009 champion's fightback and some nervous doubling of his own to win through to the decider.

Taylor, who had seen off Raymond van Barneveld 8-4 in another high-quality semi-final, then raced into leads of 3-1 and 5-3 in the final before van Gerwen dominated the second half of the contest.
He took five successive legs to move into a 7-5 lead before Taylor levelled with a stunning 160 checkout, punishing his opponent for opting not to throw at the bullseye in the 14th leg.
Van Gerwen, though, regained his composure to move to the brink of victory at 9-7, and though Taylor punished two missed match darts to keep his hopes alive in the next, the Dutchman took out a sensational 132 bullseye finish to wrap up the title.

"It feels amazing," said van Gerwen, who hit nine 180s and averaged 103.29 in the final. After the 14 weeks I was the best player because I was top of the table but I showed my class again today. I didn't play my best game against James, but in the final after the break I showed that I deserved this trophy. I'm so happy with this trophy. In the first half of the final, Phil was the better player but after the break I played really well and my finishing was good at the right moments. I'd already missed two darts to win the game but they were right on the wire and it was a bit unlucky, but after that the 132 was amazing, absolutely great."

Van Gerwen had played at The O2 a year ago when he lost to James Hubbard in the PDC Unicorn World Youth Championship final - but he has surged up to second in the world rankings since, winning the World Grand Prix and reaching the World Championship finals in the process.
"Last year after I lost in the World Youth Championship final I said to myself that I hoped one day I could play here with the big boys, and a year later I win it, which is incredible," added van Gerwen. Not many people have beaten Phil Taylor in finals and he doesn't like losing finals, so to do this gives me a lot of confidence because he's the greatest player ever. It's my biggest title yet and I hope I can win a lot more of these titles in the future." 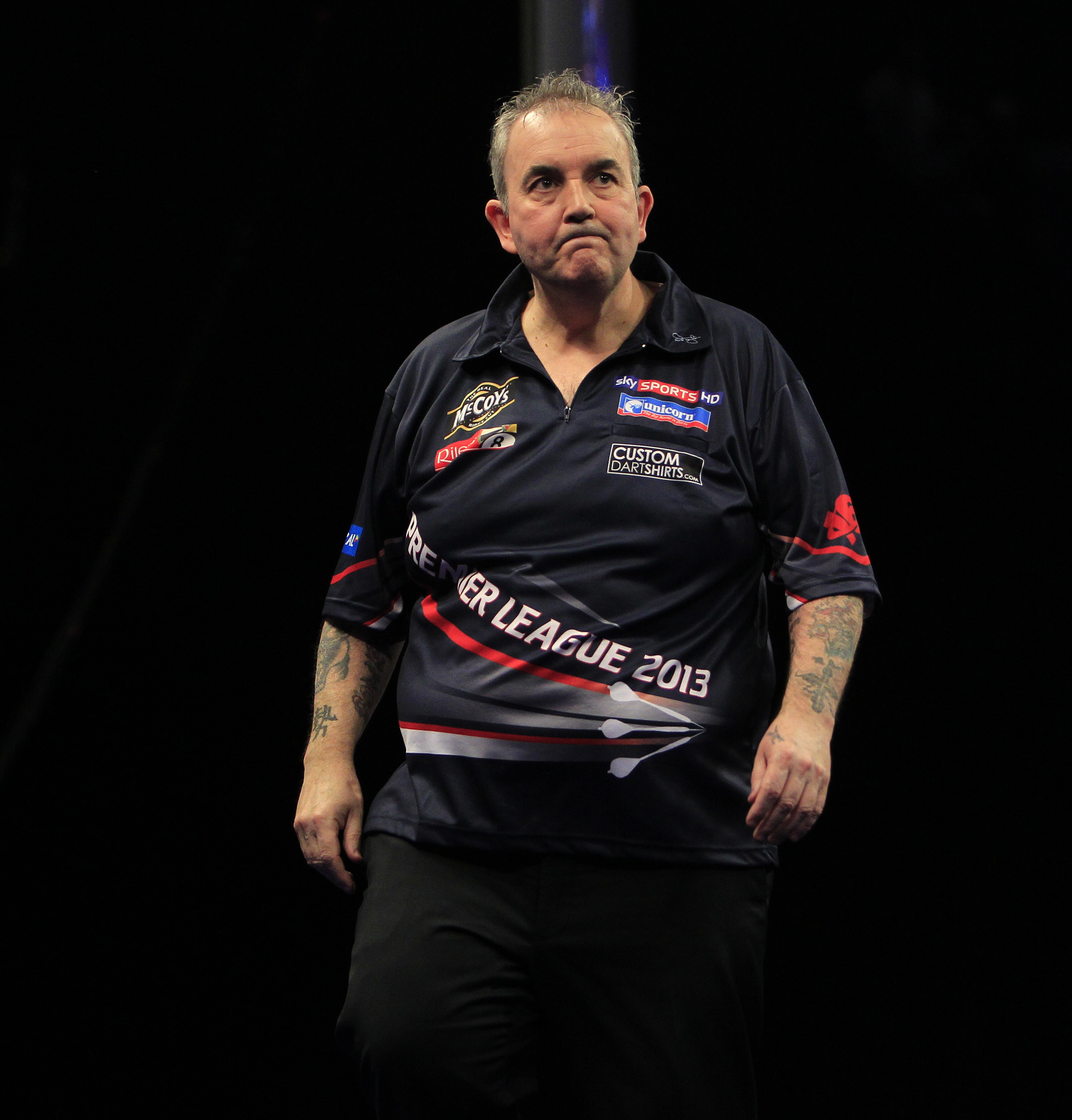 Taylor had been bidding to win a seventh Premier League Darts title and averaged over 104 in both of his matches during the Play-Offs, but had to settle for the £75,000 runner-up prize.

"I'm annoyed at myself for missing doubles but Michael was brilliant and the 132 to win the final was a great shot," said Taylor. "If I could have got to nine-each then anything could have happened, but it wasn't to be. I thought the 160 was going to rock him, but then he kicked in for the next leg with a 180, and it was a blow-for-blow game. He deserved to win and I'll go back and work hard for the next tournament now. I'm after him!"

Van Barneveld suffered the agony of a sixth defeat in the Premier League semi-finals since he first appeared in the event in 2006, although he played his part in a superb contest with Taylor.
The Dutch star opened their semi with a 180 and finished 116 to lead 3-2, only for Taylor to take the next five legs to put himself in command at 7-3, taking out a stunning 164 checkout in the process as he moved into the decider. 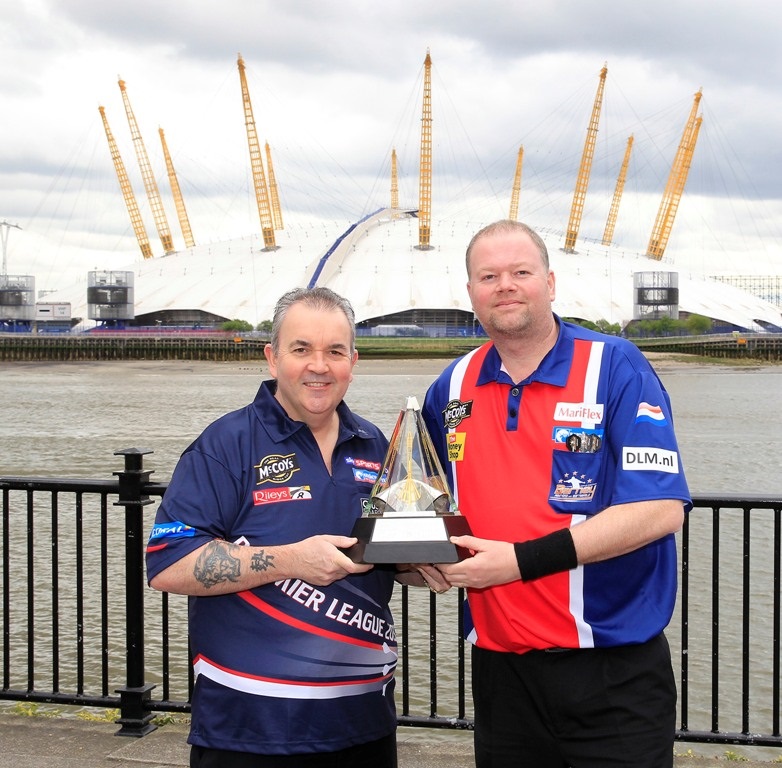 "Phil played his best game of the season against me and deserved to win," said van Barneveld. "It's hard to get in your rhythm against him but he was awesome. I probably missed just one or two crucial doubles but it was a fantastic game from Phil. He was ready for me."

Wade, the 2009 champion, was appearing in the semi-finals for a fourth time, but admitted that he was disappointed with his finishing as he went down to van Gerwen. 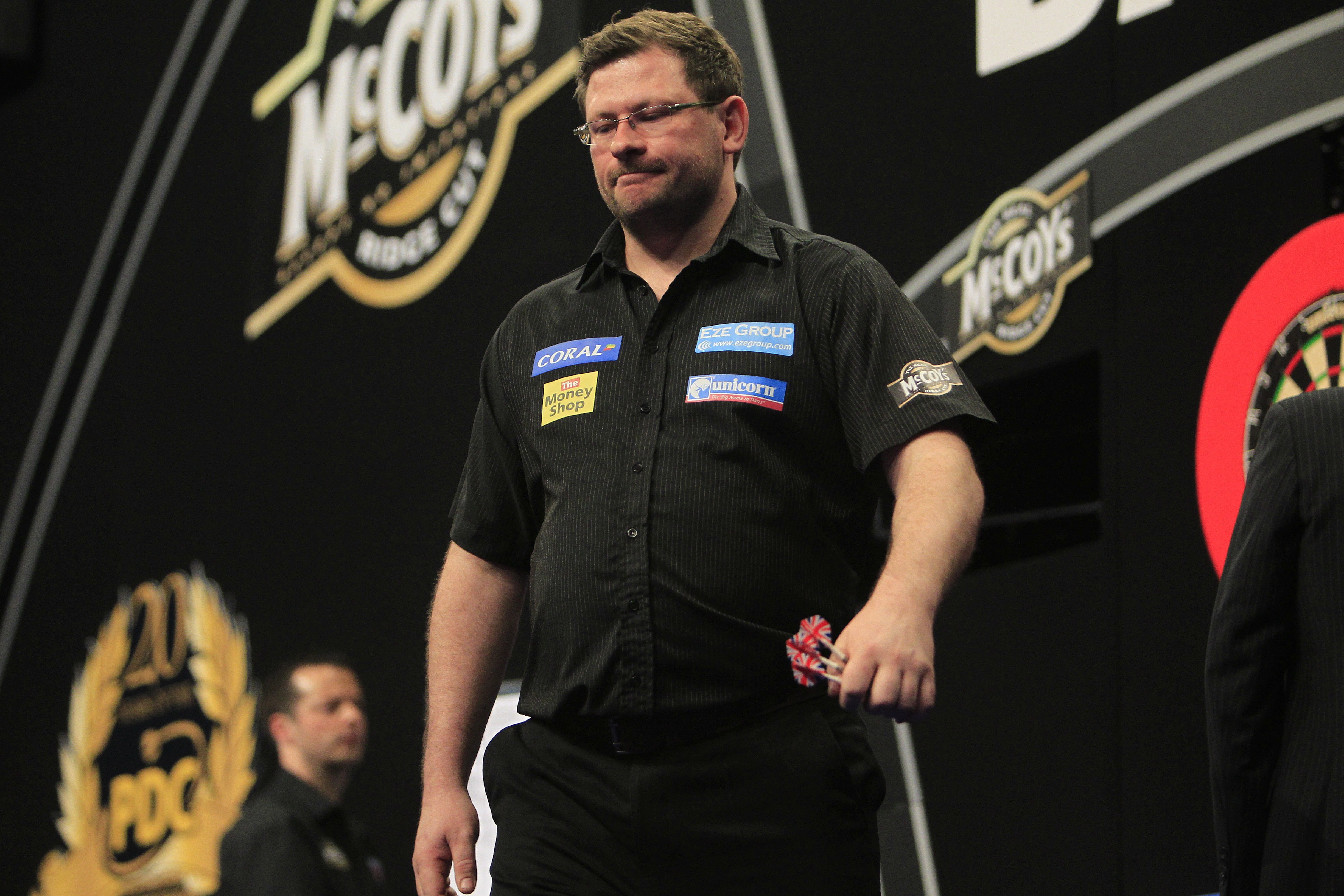 "I wasn't good enough and Michael was, and that's the story of it," said Wade. "He punished me for being messy, and he's a great player. I missed too many doubles and that's the part of my game which wins me games and should have pulled me through this. If I was hitting my doubles like I normally would, I'd have been in the final."


All pictures with kind permission by Lawrence Lustig, PDC