JAMES WADE claimed the final place in the McCoy's Premier League Darts Play-Offs as he drew with Phil Taylor in Newcastle on Thursday, while Michael van Gerwen ensured he would top the league table with a thrilling display at the Metro Radio Arena. 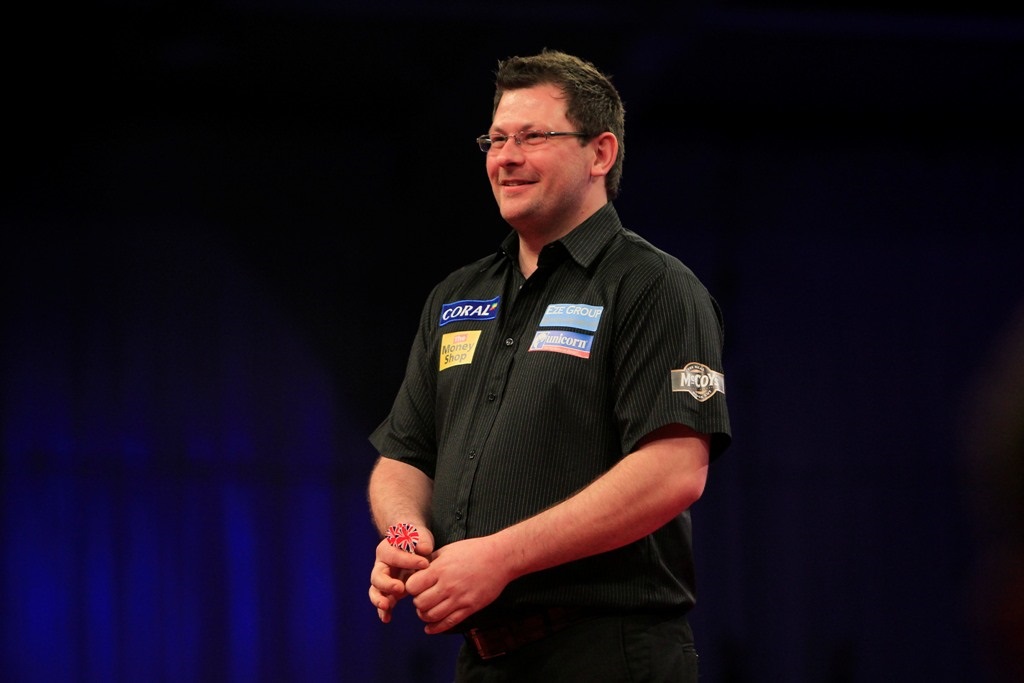 2009 Premier League champion Wade entered the 14th and final league night holding fourth place but knowing that Robert Thornton and Simon Whitlock could overtake him depending on their results.
After Thornton lost his opening game in Newcastle with a 7-4 defeat to Raymond van Barneveld and Whitlock drew with Adrian Lewis, Wade went into his clash with Taylor knowing that his fate was in his own hands.
The world number four produced a typically determined performance with some key finishes as he held his nerve to claim a draw with Taylor, and the point proved to be enough when Thornton was defeated 7-1 by van Gerwen later in the evening.
Wade will now face van Gerwen in the semi-finals at The O2 next Thursday, while Taylor plays van Barneveld in the other last four clash as the quartet battle for the £150,000 prize and to lift the prestigious trophy in London.

"It was nervy but I did enough and that draw was bigger than any win I've had all season," said Wade. "I feel fresh now and I'm ready for the Play-Offs. Michael's a brilliant player, but I'm also pretty good myself and I think it's the most even Premier League ever. I don't think anybody could pick a player to win it. "I still haven't played great, and apart probably from five games where I played well and in other games I rode my luck and got through them. I'll prepare right for the Play-Offs and I'm looking forward to it." 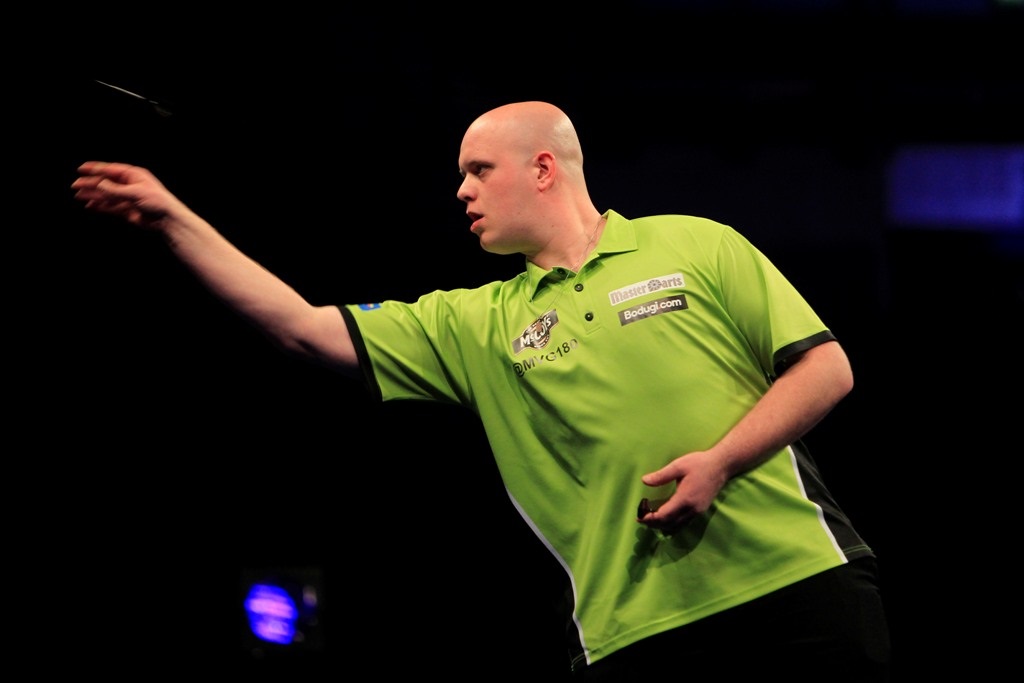 Van Gerwen ensured that he would end his debut Premier League season at the head of the table with a sensational display to defeat Robert Thornton 7-1 in a game which took less than 15 minutes.
Thornton could still have ousted Wade from fourth had he whitewashed the Dutchman, but that prospect was ended inside 90 seconds as van Gerwen took the opening leg.
He also won the next five legs - hitting four 180s in the process - to lead 6-0 and then had a dart at tops for a 113 finish as Thornton hit tops to get himself off the mark.
Van Gerwen, though, opened the next leg with scores of 180 and 177, and though he missed out on a nine-dart finish he went on to seal victory with a 105.35 average to confirm that he would become the first player other than Taylor to top the Premier League table following the weekly rounds.

"It was a big target for me and it's a very special moment for me," said van Gerwen. "It means a lot to me and you can see how difficult it is to finish top because nobody has ever done it other than Phil. It was important to win tonight with a very good game, and I can look forward to playing James in the semi-finals now. He's a quality player who knows exactly how to win games, but I just want to play my own game, like I did tonight. I think I've done very well in the last 14 weeks but we have one big week left and I've got two more games to win - and I want to win them both." 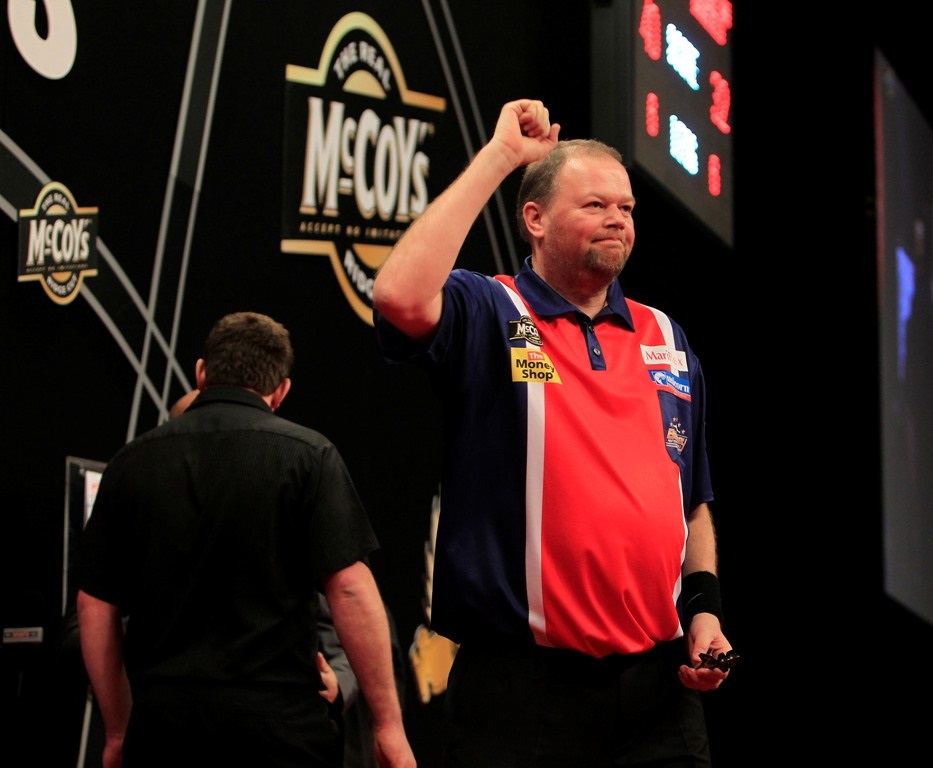 Van Barneveld finished a point behind his fellow countryman on 23 league points as he secured a return to the Play-Offs in style with a brace of 7-4 victories against Thornton and Whitlock.

"I couldn't do any more than win both games," said van Barneveld, who was cheered on by Newcastle United's Dutch goalkeeper Tim Krul. "I'll congratulate Michael on finishing top because he's deserved it over 14 weeks. To have the number one and two in the league from Holland is a good result but I have to focus on the Play-Offs now. It's a totally different game now but all four players in the semi-finals deserve to be there. I've had many years where I've been in the Premier League semi-finals and not reached the final, so my first target is Phil Taylor. It's a really hard task and it seems he always plays his best game against me, but if I play my best game I can beat anyone I want. Hopefully next week it will be a good battle and I'll practice hard for it. I'm battling, my head is right and I believe in myself again, and if you believe in yourself then anything is possible." 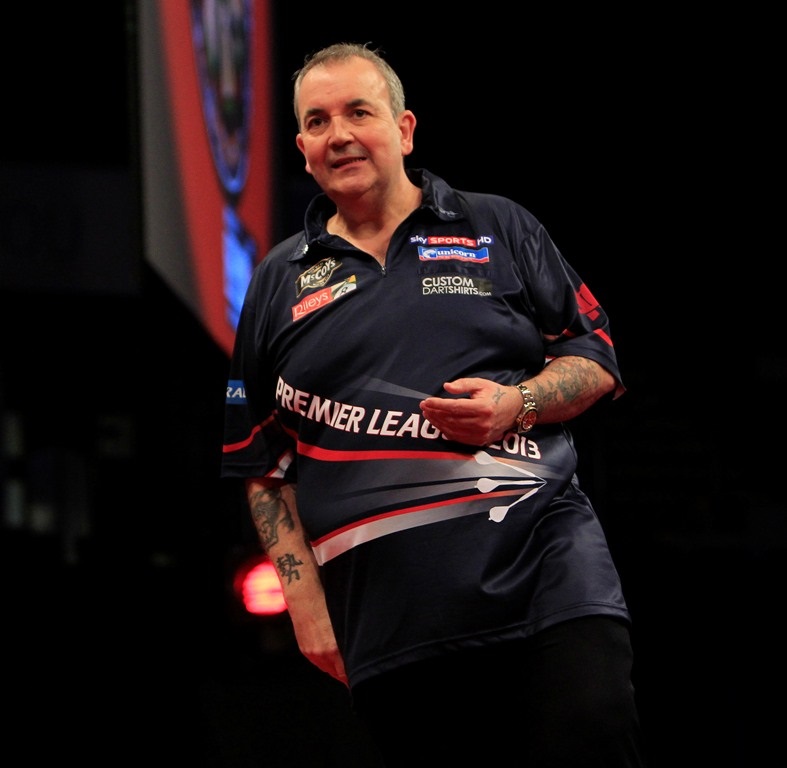 Reigning champion Taylor, meanwhile, finished third in the final league table and will face van Barneveld in the semi-finals as he bids to claim a seventh McCoy's Premier League Darts title.
After hitting back from 2-0 down to lead 3-2 against Wade, Taylor went on to grab a point as he showed his versatility around the board by hitting five scores of above 170 in the contest.

"It was an exciting match to be involved in and I knew what it meant for James," said Taylor. "I could feel the tension in that last leg because he needed the draw. It was different for me because I'd already qualified, but it's a different mindset next week because you either win, or you're out. I'm still picking my form up and I've got a few days now to finalise everything for the Play-Offs and I'll be there or thereabouts. It's been a tough 14 weeks so I'm pleased just to get through, and anyone who has qualified for the semi-finals deserves it."

Two-time World Champion Lewis, meanwhile, ended the season with a flourish by defeating Andy Hamilton and drawing with Whitlock, although he still ended the season in eighth place, two points adrift of Hamilton.

"It's been a really disappointing season but I'm delighted to get a win against Andy and to draw with Simon," said Lewis, who hit a 170 finish in his clash with Whitlock. I wanted to end the season on a high and my form's starting to come back - but it's just too late and I wish I could start the season again now to be honest. I can look forward now to the UK Open and I think I'll be hard to beat there."

Thursday's results in Newcastle brought the league phase of the McCoy's Premier League Darts season to a close, with the revamped format having seen Gary Anderson and Wes Newton relegated following nine weeks before the battle for Play-Off places went all the way to the 14th night.
Van Barneveld and Taylor will open the Play-Offs at The O2 next week, before van Gerwen faces Wade as the quartet contest repeats of the World Championship semi-finals held less than six months ago.
The winners will then contest the final for the right to leave The O2 carrying the prestigious trophy and a 150 00 pound first prize.

Van Gerwen is the 11/10 favourite to win the McCoy's Premier League Darts title with Coral, the official bookmaker of the event, with Taylor priced at 7/4, van Barneveld 11/2 and Wade the 8/1 outsider.
Van Gerwen is priced at 3/10 by Coral to defeat Wade, who is 5/2 to reach the final, while Taylor is the 4/9 favourite to defeat van Barneveld, who is 7/4 to win through to his first Premier League Darts final.

The night at The O2 will also feature the PDC Unicorn World Youth Championship final between St Helens' Michael Smith and Kettering's Ricky Evans, who will be playing for a 10 000 pound first prize as the Under-21's event concludes with the best-of-11 leg decider between the Premier League's semi-finals and final.