MICHAEL VAN GERWEN, Phil Taylor and Raymond van Barneveld all booked places in the McCoy's Premier League Darts Play-Offs with wins at the Echo Arena in Liverpool on Thursday - but the fight for the final place will be decided in Week 14 after James Wade suffered a double of defeats. 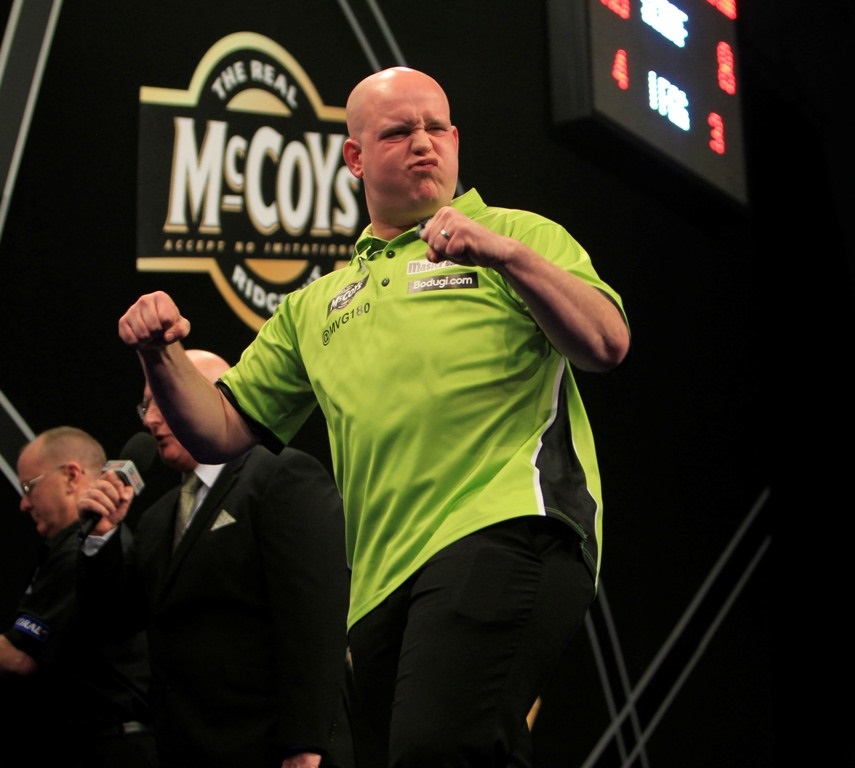 Dutch star van Gerwen continued his brilliant debut Premier League season by becoming the first player to be mathematically certain of a top-four finish when he picked up a 7-4 win over Andy Hamilton.
The 24-year-old remains three points clear at the top of the table after winning his tenth game of the campaign, and he said: "It's a very important win and I'm really happy to be through to the Play-Offs now.

"It's been a dream of mine to be at The O2 in the semi-finals. I'm doing very well but it would be amazing if I can finish top of the league table too because nobody other than Phil Taylor's ever done that. I've got one game left in Newcastle next week so that would be a big step for me." 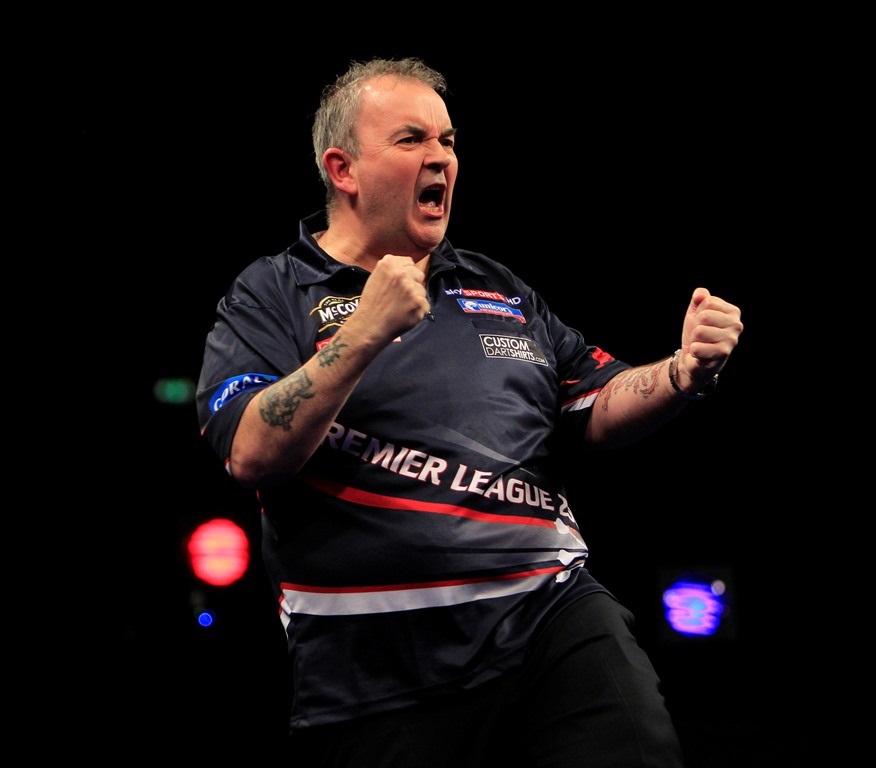 Reigning champion Taylor, meanwhile, picked up a fourth win in his last five matches as he gained revenge for his Week Nine loss to Robert Thornton with a 7-2 defeat of the Scot.
Taylor swept through the game's first four legs without reply, taking out a 164 checkout in the process, and though Thornton finished 138 as he hit back to 5-2, the World Champion proved too strong.

"I'm really pleased with that win and we both enjoyed that match," said Taylor. "Robert's been one of the best players this season so it's a massive bonus to beat him. He's a cracking player and he's full of confidence, and every time I knocked him down he was bouncing back up - his 138 was great! My form's still coming good and I'm really up for the Premier League. I'm working hard, practising well and trying my socks off to win the title." 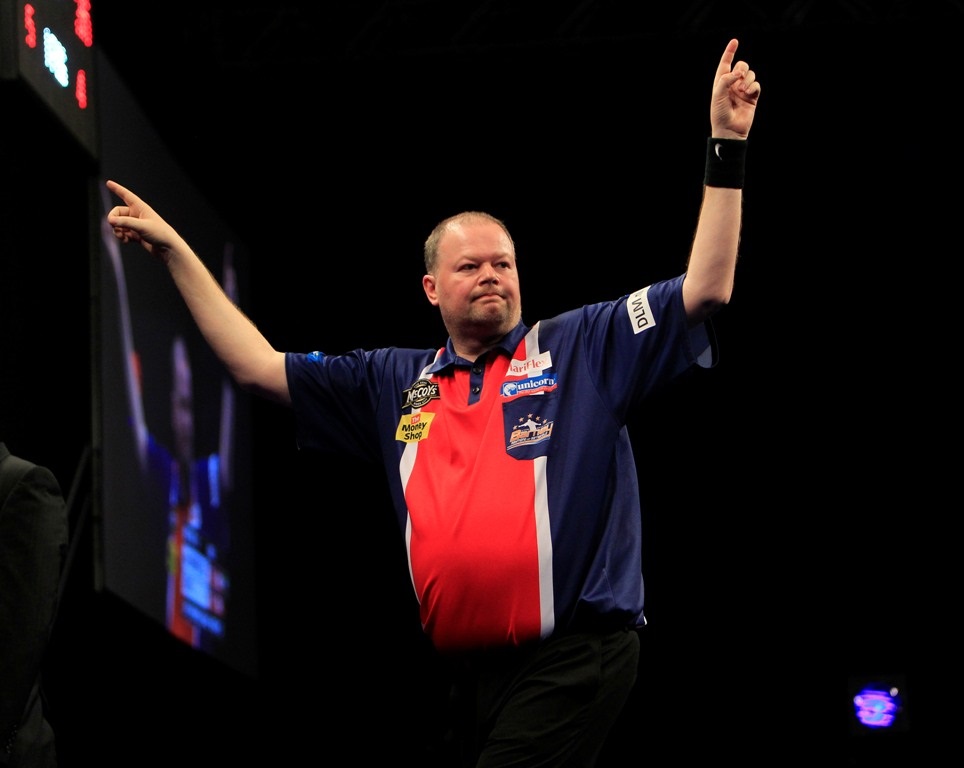 Van Barneveld, meanwhile, sealed his Play-Off place with a strong performance to defeat Adrian Lewis 7-4, averaging 102 and producing some superb finishing.
The pair shared the game's opening four legs, but van Barneveld took out 106 and 91 in a run of three successive legs as he took command, crucially punishing six missed doubles from Lewis as he broke in another leg. Lewis took two legs to pull back to 5-4, but van Barneveld landed tops and then finished 96 to seal the triumph.

"I'm delighted to be through to the Play-Offs and it's so far, so good for me," said van Barneveld. "My game's really good at the moment and I'm feeling confident, and I think I'm having a good Premier League so far. The first target was not to be relegated and then we all focused on making the Play-Offs, and it's great for me to be back in there again. I've done a lot of hard work and it's paying off, particularly with my doubles because I feel very comfortable with my finishing."

The fight for fourth place in the league table, though, will only be decided in Newcastle on the final league night next Thursday after 2009 champion James Wade lost to both Simon Whitlock and Andy Hamilton in Liverpool.
Whitlock kept alive his slim Play-Off hopes with a 7-4 win over the left-hander, taking out four ton-plus checkouts which included a 130 finish to open the game and a 116 combination to seal the triumph.
"This win keeps me alive and it means everything to me to still be in with a shout of reaching the Play-Offs in the final week," said Whitlock. love the McCoy's Premier League and I want to be successful. I'd love to be there for the Play-Offs and it would be a dream to make the final again after being there last year, so I'll fight all the way in Newcastle."

Hamilton's earlier defeat to van Gerwen had ended any feint hopes he had of reaching the top four for a second successive season, but he returned to the stage to defeat Wade 7-2 with a 100 average in the night's final contest.
"There was a lot more pressure earlier on in the game against Michael and although I had my chances I didn't take them," said Hamilton, a semi-finalist 12 months ago. "I was more relaxed against James and that probably showed in my performance. I want to win my final game next week and hopefully finish as high up the table as I can do. I played some great darts against James and I'd like to take that into next week's game with Adrian."

Wade remains in fourth place in the league table on 16 points going into next Thursday's decisive league night at Newcastle's Metro Radio Arena, where he plays Taylor.
Thornton sits just a point behind and crucially has a game in hand, although he will face both van Barneveld and van Gerwen in Newcastle, while Whitlock - who has 14 points - plays Lewis and van Barneveld.