PHIL TAYLOR and Robert Thornton picked up double victories in the McCoy's Premier League Darts at The NIA on Thursday, as Adrian Lewis' hopes of reaching the semi-finals were ended in Birmingham. 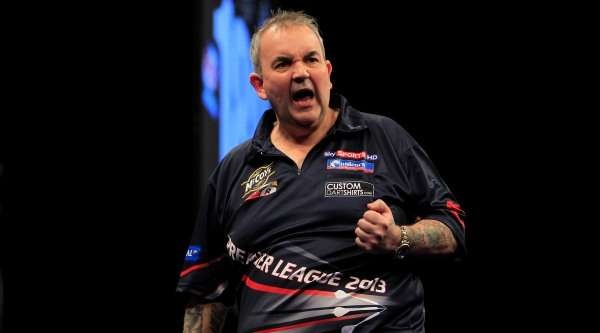 Reigning champion Taylor defeated both Lewis and Simon Whitlock in Birmingham to move up to second in the league table and take a huge step towards securing his Play-Off place in three weeks' time.
He averaged 105.24 and hit finishes of 129 and 108 in a comprehensive 7-2 win in his Stoke derby against Lewis, who found himself 5-0 down in the blink of an eye.
Taylor returned to the stage to produce an equally impressive display against Australian ace Whitlock later in the night, picking up a 7-4 win which saw him throw more than 15 darts just once in the 11 legs.

"It was two crucial wins from a tough night," admitted Taylor, who averaged 105 and 103 in the two games. "To beat Adrian first was hard, and Simon really hung in well in our game so I'm delighted to have come out on top. I've been working hard on my game, doing everything I should be doing and I'm trying to peak at the right time. You can't win this Premier League over five or six weeks, you've got to do it over five months and you can't be brilliant every week. My averages are creeping up now and it's proving to be a fantastic Premier League. Just to get into the top four will be an achievement and everyone's looking at that now."

Whitlock had earlier picked up a 7-5 win over Michael van Gerwen, who led 5-3 at one stage before seeing the Australian take the final four legs to claim a key victory which keeps alive his top-four hopes.
Van Gerwen, who was celebrating his 24th birthday in Birmingham, remains three points clear at the head of the league table but must wait at least one more week before mathematically securing his Play-Off place. 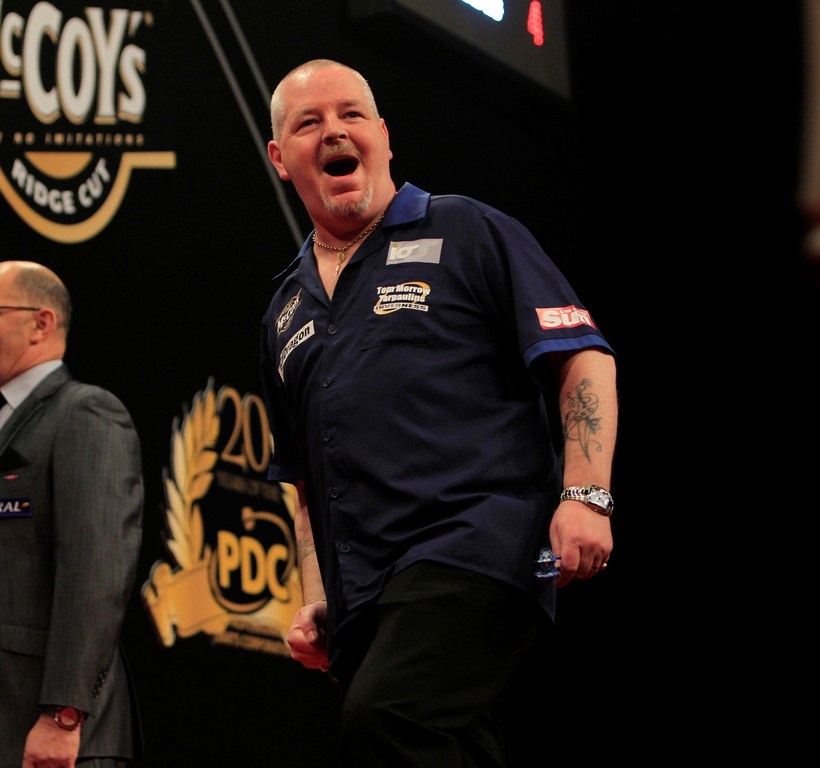 Scottish ace Thornton, meanwhile, followed up a 7-4 win over Andy Hamilton with a 7-5 defeat of Lewis to move a point adrift fourth-placed Wade as he reignited his Play-Off challenge.
The Scot ended a two-game losing run as he landed three 180s in seeing off Hamilton, before hitting checkouts of 120, 152 and 145 as he came from 4-3 down against Lewis to claim a narrow 7-5 win.

"Both wins were a bit scrappy, but you're going to have weeks like that and I'm quite happy that they went my way," said the UK Open champion. I'd lost in the past couple of weeks and though I wasn't playing that badly, I missed a lot of doubles, but Adrian and Andy gave me second chances at doubles and I took them. Over the next two weeks I've got Phil Taylor in Liverpool and then Raymond van Barneveld and Michael van Gerwen in Newcastle, so it's going to be very interesting. I'll give it my best and hopefully I can get a few more points and make the top four."

Lewis' hopes of reaching the Play-Offs were ended by his double defeat in Birmingham as he remained three points adrift at the foot of the table below Hamilton, whose chances of a top-four finish are hanging by a thread after three successive losses.

"I'm just trying too hard to win and I shouldn't do that, I should relax and play the game," admitted Hamilton. It's going to be hard to turn it around but I'll keep giving it 100 percent and I'm looking forward to next week - I'm not finished yet." 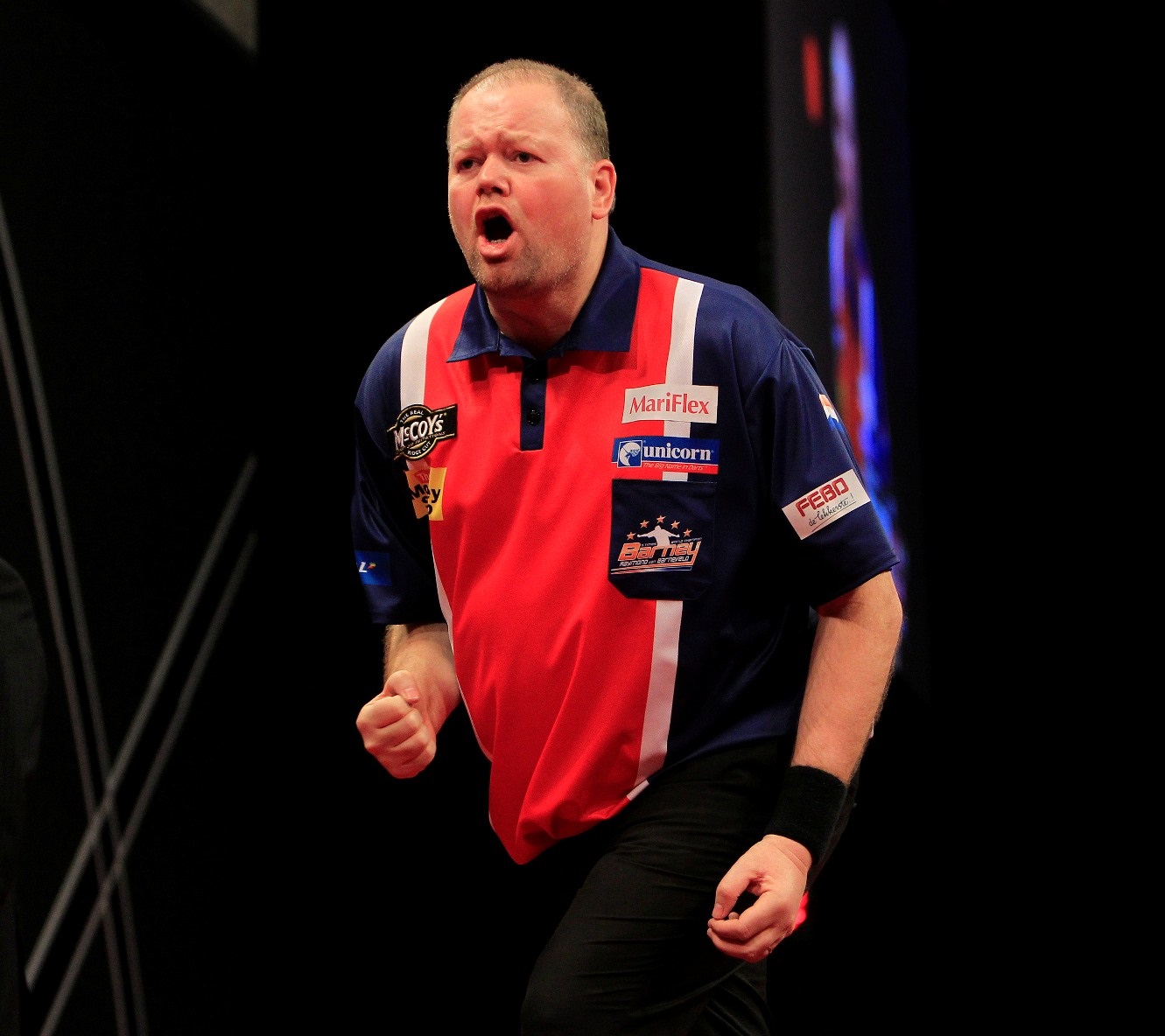 The night's other game saw Raymond van Barneveld produce a sublime performance to defeat James Wade 7-2, leapfrogging the 2009 champion in the table in the process as he moved third, level on 17 points with Taylor.
Van Barneveld admitted afterwards that Wade's pre-match prediction that he "won't lose" the game had fired the Dutchman up, as he hit five 180s, finishes of 116 and 101 and ended the contest with an average of 104.

"At the end of the game, James shook my hand and said I played a fantastic game," said van Barneveld. "I don't know why he said what he did before the game, but I have to thank him for it because it sharpened me up! For the first time this season, I felt so confident. The darts went in magnificently and I'm so happy with that, my doubles were very good. I'm really pleased with my game and proud tonight. I've got three matches left, and I really believe that I'm going to make that top four."

The tournament continues next Thursday with the penultimate league night, which will be held at the Echo Arena in Liverpool.