MICHAEL VAN GERWEN moved clear at the top of the McCoy's Premier League Darts table with wins over Phil Taylor and James Wade at the Motorpoint Arena in Sheffield, as Raymond van Barneveld and Simon Whitlock also picked up key victories. 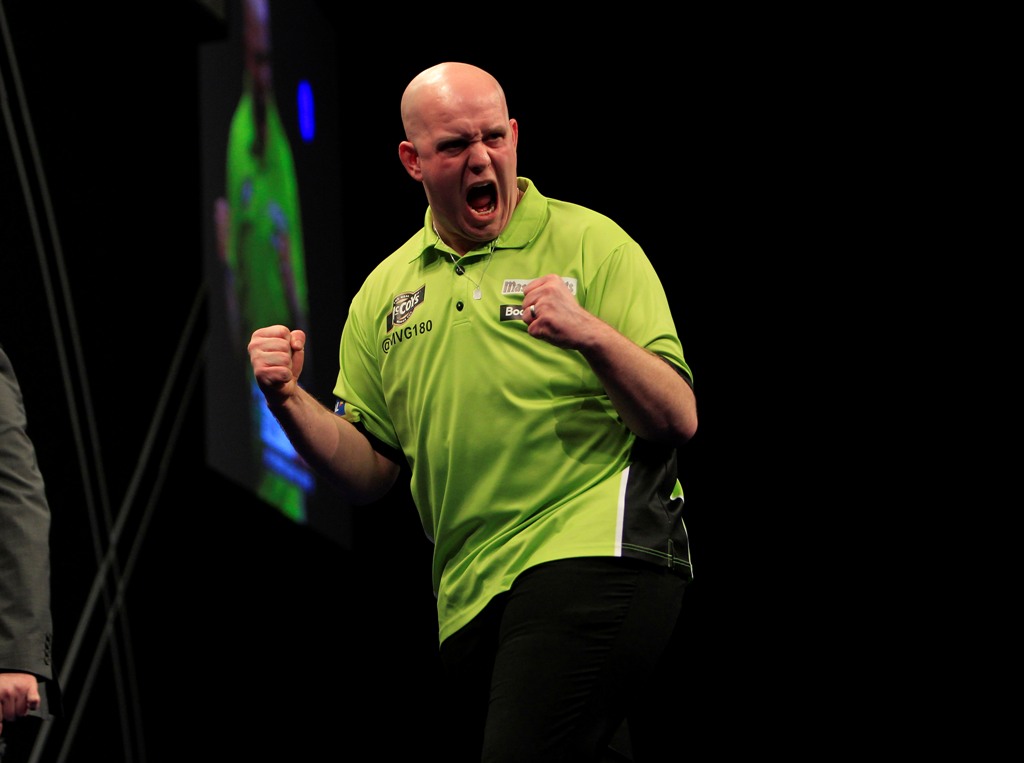 Dutch star van Gerwen enjoyed a memorable night in Sheffield, overcoming reigning Premier League champion Taylor 7-3 before returning to the stage to see off 2009 winner Wade 7-5. The wins mean that van Gerwen sits two points clear of Wade in the league table with four league nights remaining before the top two progress to the Play-Offs next month.
Van Gerwen was at his brilliant best as he swept past world number one Taylor in their repeat of January's World Championship final. On that day, Taylor had hit back from behind to claim the win, but van Gerwen followed up taking an early 4-1 lead by defying Taylor's fightback to 5-3 by going on to complete the victory with six 180s and a 103.90 average.
Van Gerwen later returned to the stage to see off Wade 7-5, although after taking a 6-2 lead was made to work hard before sealing the victory with a 13-darter in the deciding leg.

"It's been an amazing night for me," said van Gerwen. "Coming here I knew it would be a dream to win both matches and to be clear at the top of the table, so I'm very happy to have done that. I think I did very well and it puts me in a very good position. It was difficult to play two of the best players in the world, so to walk away with two wins is bonus .Last time I played Phil I missed five darts to beat him but tonight it was a fair result and I was the better player tonight. James is always a tough player to play but I was maybe too relaxed against him, but I got the win and it doesn't matter how I did that."

Wade had earlier picked up his sixth win of the season as he powered past Adrian Lewis 7-2, hitting five 180s and averaging 103.91 in another hugely impressive display. Wade was later joined on 14 points in the table by Raymond van Barneveld, who overcame Andy Hamilton 7-5 in a see-saw encounter. 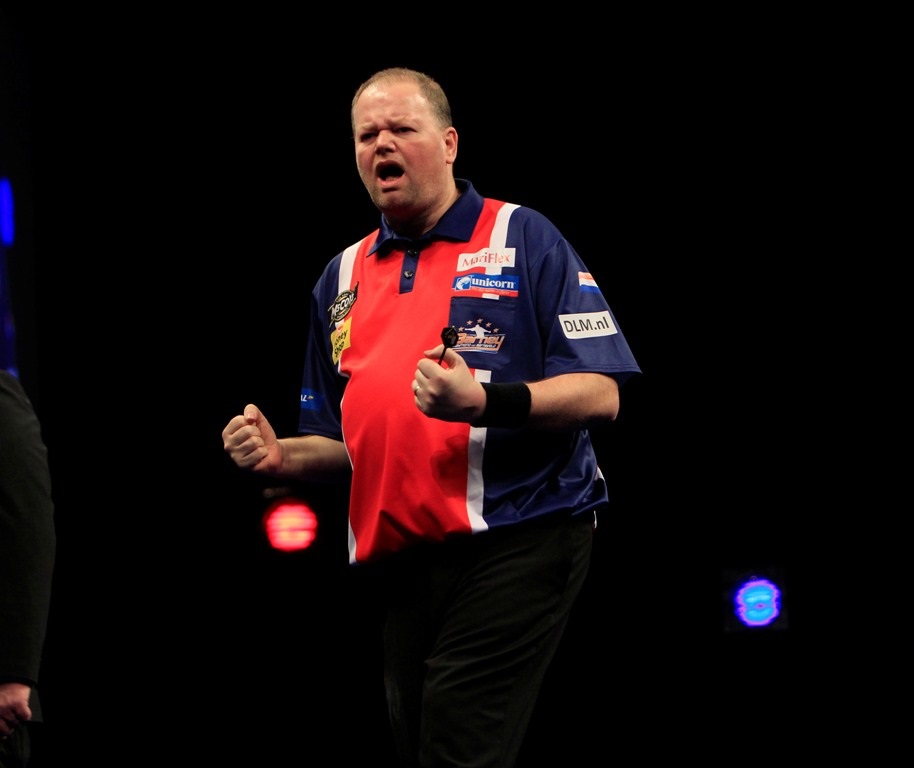 The Dutchman took the game's first three legs and also led 4-1 before Hamilton won four successive legs to edge ahead - only for van Barneveld to hit a brace of double eight checkouts to lead 6-5 before sealing the victory with a 14-darter in the deciding leg.

"I'm very happy with that but when Andy went 5-4 up I thought I'd thrown it away," admitted van Barneveld. "Luckily for me he didn't play his A-game in the last three or four legs, but I hit some crucial shots. In the past I might have lost that game, and when I was 5-4 down I was hoping for a draw so I'm happy to have come away with the win in the end. There's still pressure because you can't afford to lose, and with two matches next week in Dublin - against Michael van Gerwen and Phil Taylor - there's going to be a lot of pressure on me, but I'm looking forward to it." 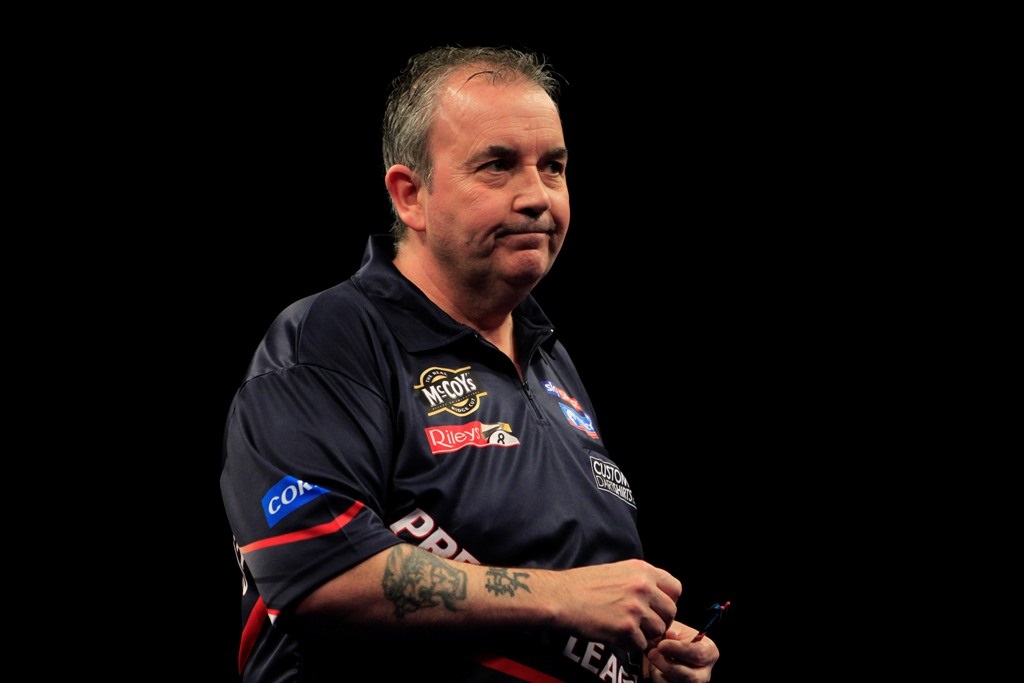 Taylor's defeat to van Gerwen means that he has now lost four league games in a Premier League regular season for the first time since the tournament was introduced in 2005. He now sits a point behind fourth-placed Robert Thornton and remains level with Hamilton on ten points as the battle for Play-Off places continues.

Australian ace Simon Whitlock, who began the night at the foot of the table on six points following last week's elimination of Wes Newton and Gary Anderson, kick-started his challenge to reach the top four with a fine display to defeat Thornton 7-4. Thornton led 4-2 at one stage in the contest, but Whitlock took the next five legs without reply to claim victory, punishing missed doubles from the Scot as well as ending the game with six 180s.

"I don't like being eighth and I'll be fighting all the way to try and make the Play-Offs," said Whitlock. "I'm grateful of getting the two points and I want to get on a roll now. I've got a figure in my mind of needing a minimum of 15 points to make the Play-Offs and I'm on eight points now, so I know what I need to do."

Whitlock's win saw him jump above Adrian Lewis, whose sixth defeat of the season sees him remain on seven points, four adrift of the top four going into his final six matches.
The tournament continues next Thursday when the eight stars visit The O2 in Dublin, with a 9,000-plus sell-out crowd set to see six matches on the night. Van Gerwen will face both van Barneveld and Lewis, while the five-time World Champion also takes on Taylor in a night which could prove crucial. Reigning champion Taylor also meets Hamilton, who doubles up against Whitlock, while Thornton plays Wade in the night's other contest.