Taylor and van Gerwen's rematch of January's World Championship final lived up to the billing in front of a sell-out 8,000 crowd, with both players setting up possible nine-darters during the contest. Van Gerwen, on his Premier League Darts debut, led 3-1 and 6-4 but paid for missing five match darts in the 11th leg as Taylor kept his hopes alive with double 16 before finishing 104 in the game's deciding leg. 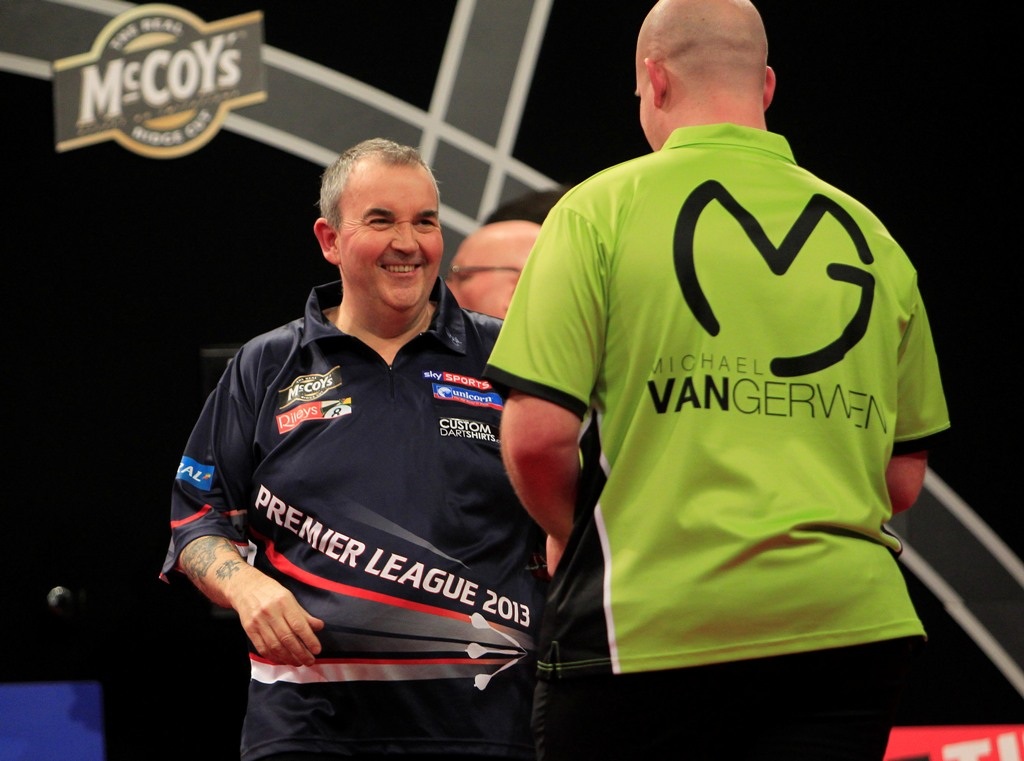 "It was a tough game and it ended up being a great scrap," said Taylor, the reigning Premier League Darts champion. "A draw was probably a fair result in the end. I'm happy to get a point on the board but I missed a few doubles at the start and let Michael in and he let me off the hook a bit later on. The league's not won in the first four or five weeks and we'll all start to settle down - even I was a little bit nervous tonight and I'm not usually like that!"

Taylor had earlier opened the contest with back-to back 180s, and landed two more maximums in the fifth leg before a key bullseye finish, for an 89 checkout, levelled at three all. The Dutch ace, though, took three of the next four to earn a point before Taylor hit back to secure a draw.

"I probably should have got both points but I missed five darts to win it," said van Gerwen. "It hurts when you give a point away, but that happens sometimes and I've got another game next week which I'll prepare for now. I think I did well for my first Premier League game and I enjoyed it very much. It was an amazing experience and it felt great - I could even have got a nine-darter tonight, the feeling was there but maybe I wasn't quite concentrated enough on the 141 finish because of the excitement of the night."

Five-time World Champion Raymond van Barneveld made a fine start as he averaged 102 in a 7-4 victory over Gary Anderson, who led 2-0 and 3-1 before the Dutchman took command by winning five straight legs to set up the win.

"I'm very pleased with that," said van Barneveld. "My scoring was great but I have to sharpen up on my finishing, Other players may have punished me tonight so I know I'll have some work to do on the practice board, but I believe in myself and I know I can win this tournament. The crowd were great and I'm looking forward to Aberdeen next week too because I always get a good reception in Scotland too." 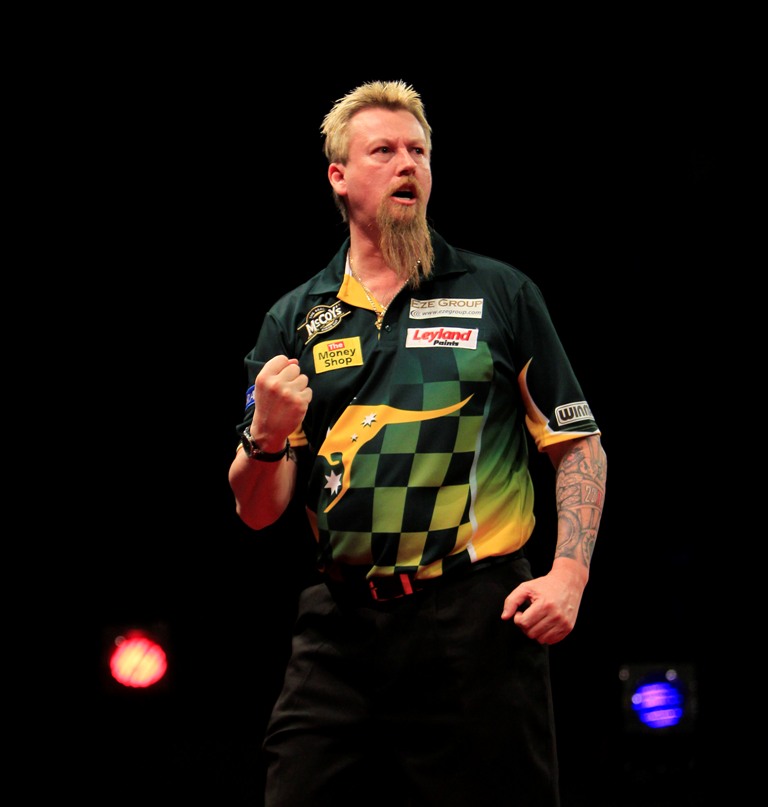 Simon Whitlock took out finishes of 121 and 108 as he overcame Adrian Lewis 7-3 in the battle of the Premier League's last two beaten finalists to punish some wayward finishing from the world number two.

"I was hoping to get off with a win tonight and I've managed to do that, so I'm happy," said Whitlock. "The performance probably could have been better, but I hit the doubles at the right time, and a couple of key big finishes, and got the win. "It's important to get off with a win because nobody wants to be in the relegation places so I'm really happy."

Lewis was left frustrated with his performance, which was typified when he hit a 180 to leave 60 in one leg only to burst his score by hitting the treble 20 - instead of a single 20 to leave tops - when he returned, and he missed 14 darts at a double in the contest.
"I'm very disappointed," said the two-time World Champion. "I missed too many doubles and that's what cost me the match. "When I hit the treble 20 and burst my score it summed up my night. I had Simon and let him off the hook, and it's frustrating - but I'll get back on the practice board and work hard to get ready for Aberdeen next week." 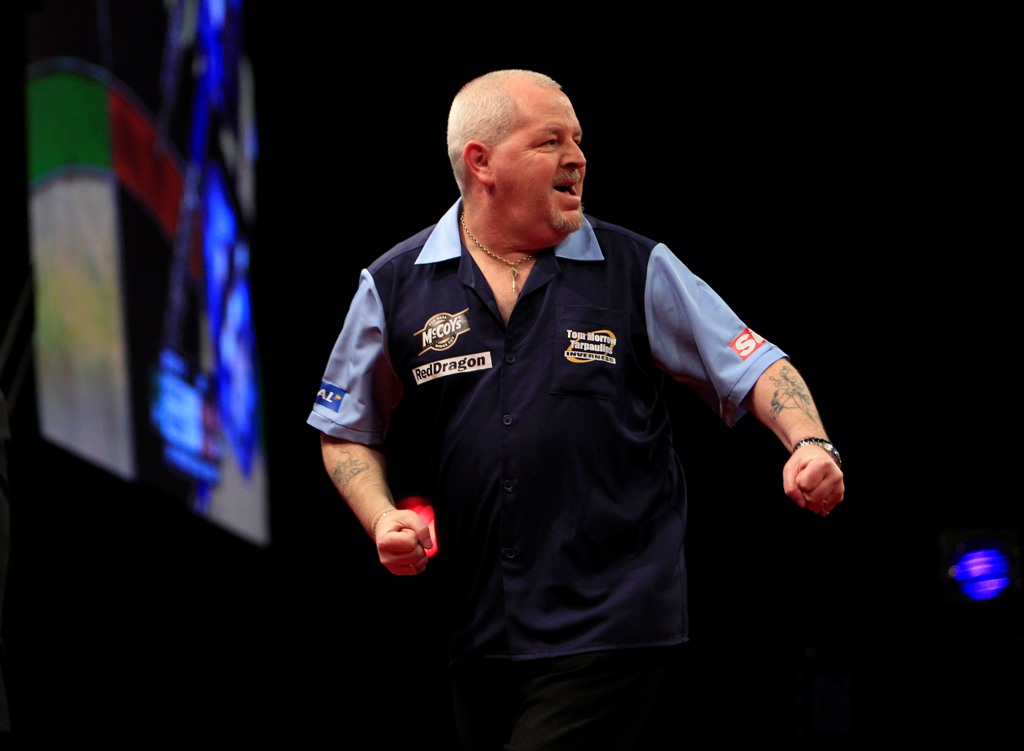 Debutant Robert Thornton survived Andy Hamilton's fightback from 5-1 down as he edged out the 2012 semi-finalist 7-5. Thornton took out finishes of 104 and 117 in winning five straight legs before Hamilton, aided by a brace of 80 checkouts, hit back to level. The UK Open champion, though, won a crucial 11th leg by hitting a 180 and a 120 finish before sealing victory with a fifth 180 in a 12-dart finish.

"Andy has the experience of playing in the Premier League last year and he's one of the toughest opponents in the event, so I'm delighted to get the win," said Thornton. "He's a street fighter and, like me, he'll never give in so I knew when he started fighting back what could happen. When it went to five-all I just wanted to hold my throw, so to take both points was great. It's a good start and the adrenaline rush when I got on stage was unbelievable - it's an amazing atmosphere."

Hamilton, who reached the semi-finals in his debut Premier League season 12 months ago, admitted: "I missed too many doubles early on and that's what lost me the game in the end. "Robert played the better darts and deserved to win, but the league season's a marathon, not a sprint and this wasn't my night."

2009 champion James Wade capitalised on missed doubles from another debutant, Wes Newton, as he took a 7-4 victory from their opening clash. Wade took command by moving from two-all to lead 5-2 before retaining his advantage to take the points.

"Getting the two points was the main thing, event if I didn't play as well as I'd wanted to," said Wade. "I've been practising hard, I've got the hunger and I believe in myself. Obviously the practise has paid off because I got the win, and I hit the right shots at the right time."

Newton, last year's European Championship finalist who was playing in front of the biggest crowd of his career, admitted: "It was an awesome experience and brilliant to be on stage in that atmosphere, but it would have been better if I'd won! "I was a bit nervous, and maybe that showed in my finishing because I missed a lot of doubles. "I was a bit rusty on my finishing and that cost me the game, but I'll be back."