Pjil Taylor secured his place in the McCoy's Premier League Darts Play-Offs with a narrow 8-6 victory over Andy Hamilton, as Raymond van Barneveld turned on the style at the Capital FM Arena in Nottingham.
Taylor maintained his unbeaten record this season as he defeated the World Championship finalist in an all-Stoke battle, although Hamilton missed the bullseye to grab a draw in a dramatic final leg. Taylor accepted his reprieve by landing double eight to ensure an eighth straight victory, which took him onto 17 league points and ensures his spot in May's Play-Offs at The O2 in London. Although Hamilton is joint bottom of the table, he remains only three points adrift of the top four following an intriguing night in Nottingham.

Five-time World Champion Raymond van Barneveld produced his highest-ever televised average of 112.28 as he defeated Kevin Painter 8-6, with the victory including three 11-dart finishes from the Dutchman. Van Barneveld is now in third place, although only behind Simon Whitlock on leg difference following the Australian's superb 8-2 defeat of reigning champion Gary Anderson.

Whitlock had been whitewashed by James Wade in Cardiff a week earlier, but bounced back in style with the victory, as he hit a ten-dart leg to deny Anderson a victory on his return after missing week eight to attend his father's funeral in Scotland.

World Champion Adrian Lewis moved fourth in the table, jumping above James Wade with an 8-5 win over the 2009 champion. Lewis hit six 180s and came from 4-2 down to take six of the game's final seven legs in picking up his third victory in as many weeks. 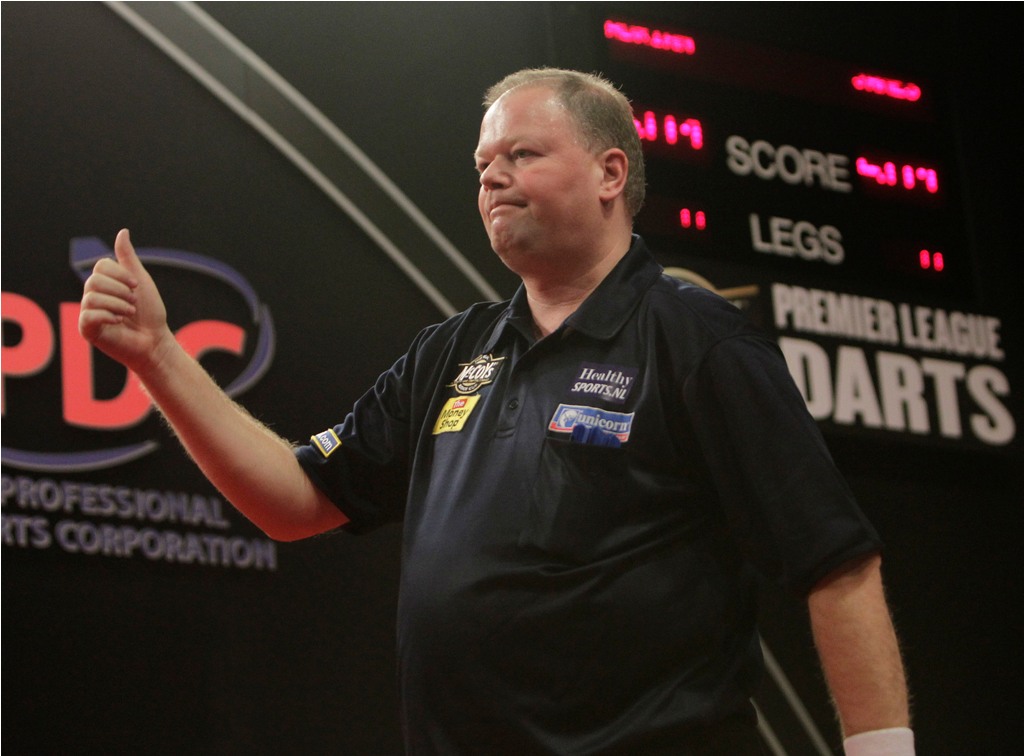 Raymond van Barneveld achieved his highest recorded televised average of 112.28 as he held off Kevin Painter's fightback to take an 8-6 victory in their McCoy's Premier League Darts clash in Nottingham.
The Dutchman delighted a capacity crowd at the Trent FM Arena as he romped into a 7-3 lead before Painter took three successive legs to force a decider.
Van Barneveld, who had earlier hit five 180s, was first to a finish and landed double ten to secure his fourth Premier League victory of the season, producing his best average in a televised game in the process.

"I'm very happy with my average," said van Barneveld. "I know what I can do and I showed that tonight. I've not been consistent week-on-week but I'm working hard. Kevin came back brilliantly from 7-3 down and I thought he would take out the 145 in that last leg, but he didn't and I got the double ten and I'm happy to get the win. It's a really tight league and everyone still has a chance of making the top four."

The Dutchman took an immediate lead, punishing a missed tops from Painter for a 120 finish to hit double eight for a 13-darter to break before finishing 84 on double eight to win the second leg. Painter finished 100 to get off the mark before van Barneveld won the fourth with a superb 11-darter. Painter hit a 180 and double four to take leg five before the Dutchman took another double of legs in 13 and 11 darts, which included two 180s as he moved 5-2 up.
Painter finished 71 with van Barneveld waiting on a double to win leg eight, but the Dutchman landed back-to-back 180s in the next - which was his third 11-darter of the game - before taking out double eight for a 7-3 cushion. Painter took out 76 to begin his fightback and then took out 90 on the bull for a 12-darter to break and 120 to force a deciding leg. He was, though, unable to pressure van Barneveld, who initially missed darts at double top and ten before returning when Painter could not finish 145 to seal the win on double ten.

Painter said: "His finishing was brilliant and it felt like he didn't miss anything until the final leg. I got back and gave myself a chance to get a draw, but I had a bad start to that last leg and left myself too much to do. There were a couple of legs earlier on where I had chances and didn't take them, and it could have been a different story if I did." 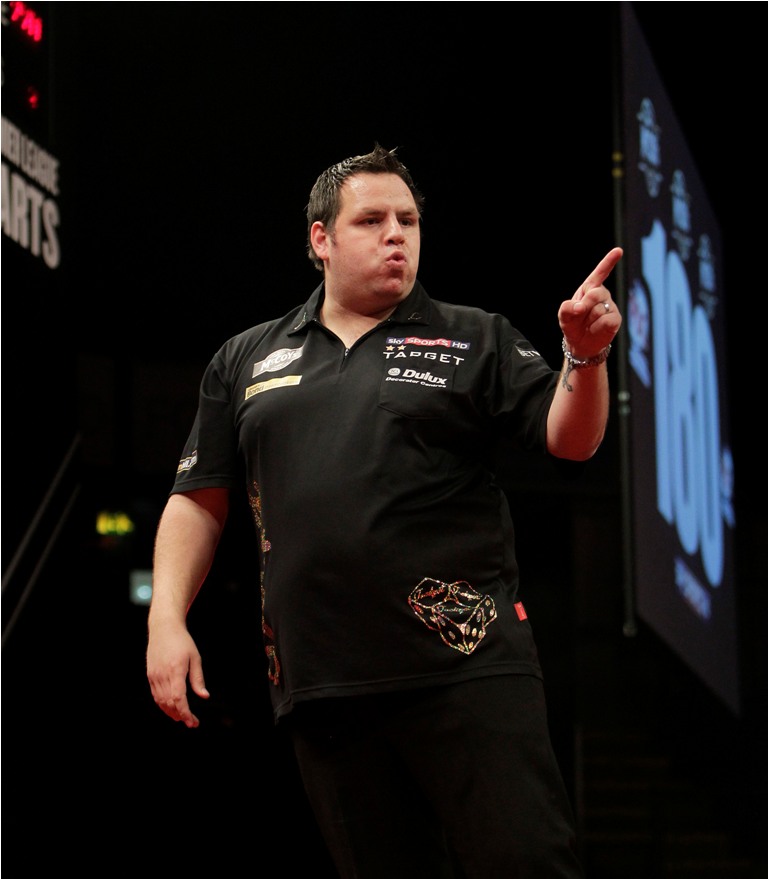 Weltmeister Adrian Lewis hit back from 4-2 down to take an 8-5 victory over James Wade as his McCoy's Premier League Darts revival continued.
The Stoke ace had to wait until week seven to pick up his first victory of the season, but has now won three of his last four matches to move above Wade in the league table.
Lewis now enjoys a week off in Sheffield - having played twice in the absence of Gary Anderson in Cardiff - but has revived his Play-Off challenge with the win, which came despite the pair being disrupted by a dislodged piece of stage.

After the pair shared the first two legs, Wade took command with a 14-darter to break throw before he bettered that with a superb 11-dart finish to move 3-1 up. Lewis hit a 180 - for the third straight leg - in an 11-darter to reply and also landed a maximum in leg six, only to miss the bull for an 87 finish as Wade took out a showpiece 80 with two double tops to lead 4-2 at the break.
The World Champion, though, hit back strongly to win the next four legs, twice hitting double top and also finishing 64 on double eight as he moved 6-4 up. Wade landed double five for a 13-darter to hit back in the 11th, posting his third maximum of the process, but Lewis immediately broke back in a key leg, hitting a 12-darter which featured his sixth maximum. That moved him 7-5 up to ensure at least a point, and when Wade was unable to apply the pressure in the next he took out 78 on tops to ensure the victory.

"I thought I was the better player and I dominated the match," said Lewis. "I should have gone into the break at three each but I missed the bull, and I dug in after that. The last time we played, in Glasgow, James was the better player but I was the better player tonight. I was averaging about 110 for most of the match and hit a lot of 180s. I didn't jump on James at the start and I was waiting for him to kick in, and put myself under pressure. I knew I couldn't afford to lose this game and I knuckled down and got the job done." 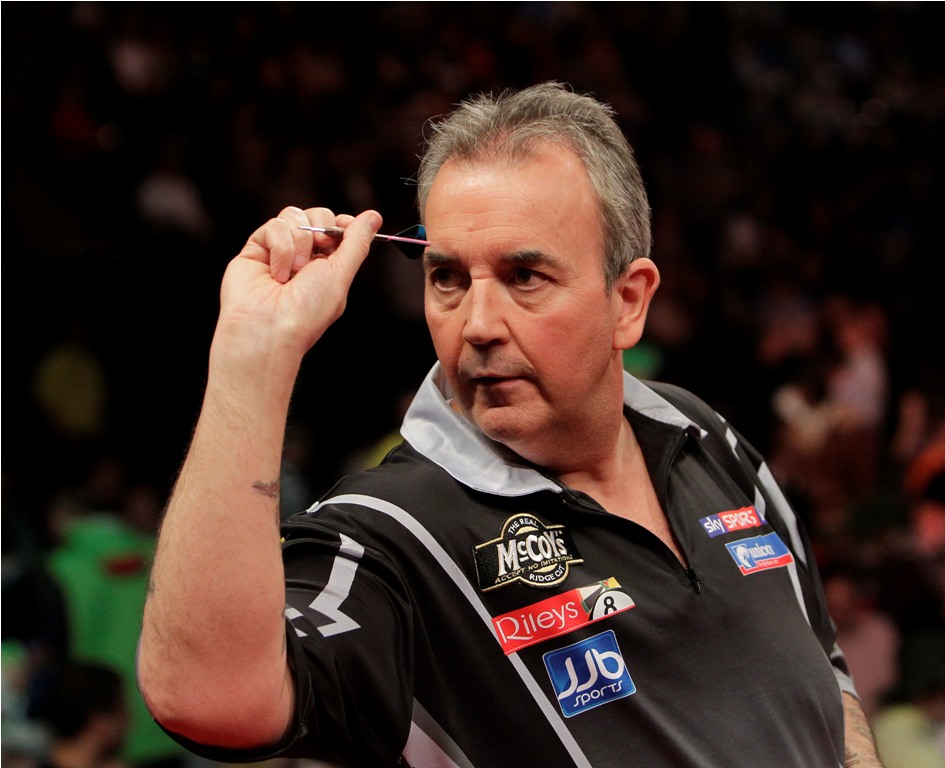 Phil Taylor ensured his McCoy's Premier League Darts Play-Off place with an 8-6 victory over Andy Hamilton at the Capital FM Arena in Nottingham on Thursday - as the World Championship finalist missed the bull to claim a dramatic draw!
Taylor extended his unbeaten record this season to nine games and also recorded his eighth straight victory as he ensured his place in the semi-finals at The O2 in London on May 17.
However, the world number one was given a scare as gritty Hamilton gave himself a chance to secure a point in the game's deciding leg, only to miss the bull and allow Taylor to land a relieving double eight.

Hamilton made a strong start to win the first two legs, hitting a 180 and double eight to take the opening leg before finishing 58 for a 14-darter in the second, albeit following missed doubles from Taylor. The five-time Premier League champion produced his now typical response to win the next four legs, breaking throw with a 12-darter to get off the mark in leg three, hitting 180s in the next two and legs of 13, 14 and 13 darts to lead 4-2.
Hamilton took out 141 and 100 to win two of the next three legs, with Taylor landing a 180 in a 13-darter in between as he maintained a 5-4 cushion. A fourth 13-dart leg of the game from Taylor gave him a 6-4 cushion, although he would pay for missing three darts at double eight in the next as Hamilton took out double 16 to hit back. Taylor ensured a minimum of a point by landing his fourth 180 and double eight to lead 7-5, only to then miss two match darts as Hamilton took out 86 on the bull to force a deciding leg. Hamilton, though, missed the bullseye to snatch a draw in the deciding leg, as Taylor was given a reprieve for his earlier miss at the middle double by returning to finish double eight and take both points.

"I'm really pleased to both win and make sure I'm in the Play-Offs," said Taylor. "I've said all season that my target is winning back this title and this is another step towards that. The top four is the aim because it's such a strong field and we're all wanting to be in London next month, but I'm there now. Andy did really well and we both enjoyed the game. The crowd were great and we both got into the atmosphere - any maybe at times that took away from our own darts. When it got to 7-5 I took my foot off the gas a little bit, but I knew only I could lose the game. Andy's a real grinder and he won't give in - and I wouldn't be surprised if he goes on to make the Play-Offs now."

Hamilton competed in Nottingham only six days after his father Jim passed away, and he admitted: "Under the circumstances I'm proud of myself after everything that's happened in the past week. "o get six legs from Phil, and even have a dart to get a draw, was more than I could have wished for. It would have made my night if I'd hit that bullseye, but it wasn't to be."

Simon Whitlock bounced back from his McCoy's Premier League Darts whitewash with a superb 8-2 defeat of reigning champion Gary Anderson at the Capital FM Arena.
Whitlock endured his worst night since making his Premier League Darts debut in 2010 when he lost 8-0 to James Wade in Cardiff a week ago.
However, he responded superbly with a 101 average to defeat Anderson, who returned from missing last week's event to attend his father's funeral in Scotland but was unable to find the form which took him to the title last May. He did have some moments of brilliance, notably an effortless 143 to win the second leg, but misses at double top at crucial moments proved costly as Whitlock took command.

The Australian had opened the game with a 13-darter and, after Anderson's fine effort to level, he took five successive legs to move 6-1 up, hitting two 180s and a 14-darter in the process. Anderson finished double ten to win his second leg of the match, but even a 180 was not enough in leg nine as Whitlock produced a sensational ten-dart finish - scoring 180, 140 and 149 to set up double 16. The pair also traded 180s in leg ten, but Anderson was unable to land tops and Whitlock took out 74 to secure the points in style.

"It was very important to bounce back well," said Whitlock. "To get an 8-0 flogging wasn't real good, but I showed a lot of character tonight. I went out there with a positive mind and put last week to bed by playing my best tonight. You have to throw a 100 average to win nowadays, and if you do that you're going to win a lot of games. I'm back up to second but I'll be happy to be in the top four - the McCoy's Premier League is going to be a very tight finish but I'm in a good position."

Anderson admitted: "It was a struggle tonight. "I've not really had chance to play for two or three weeks and it was going okay on the practice board, but it was terrible up on stage. It will come good again and now I can get my head sorted and get back to practising. Two or three wins will put me back up the table and I've still got a game in hand."