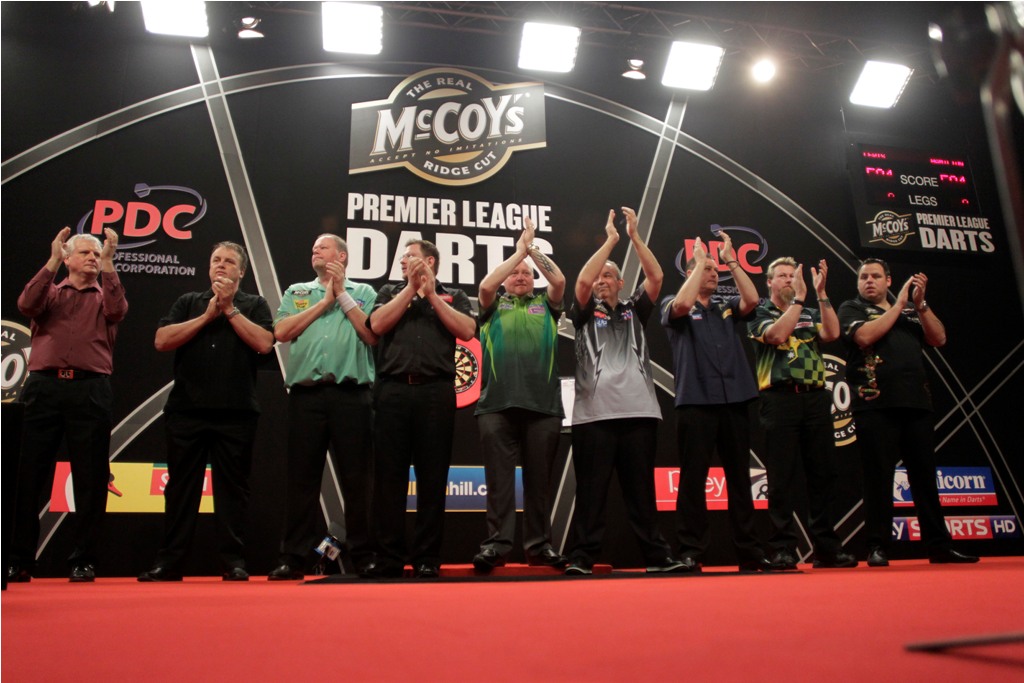 James Wade completed only the third whitewash in the history of the McCoy's Premier League Darts, seeing off Simon Whitlock 8-0 on Thursday, as World Champion Adrian Lewis took one win from his two games at the Motorpoint Arena in Cardiff.

Wade, the 2009 Premier League champion, produced a clinical display to see off the Australian, who was limited to only three darts at a double in a below-par display.
The win moves Wade up to second in the league table following an intriguing night in Cardiff, which saw Lewis compete twice in the absence of reigning champion Gary Anderson, who was attending his father's funeral in Scotland.

The evening had also begun with an emotional minute's applause in memory of the late two-time World Champion Jocky Wilson, who passed away last Saturday, as the seven players and former stars Rod Harrington and Keith Deller led the tributes on stage.

Lewis and Hamilton returned to the stage for the night's opening match, and it was the latter who took an 8-4 victory as he punished a string of missed doubles from the World Champion in establishing a 5-1 advantage which he would never lose.
Lewis returned to the stage for the night's final game, and turned the tables on van Barneveld by hitting finishes of 160, 110 and 106 in taking a superb 8-2 win over the Dutchman.

Phil Taylor recorded his seventh successive victory and continued his unbeaten run this season with a superb 8-2 defeat of Kevin Painter, completing the victory with a ten-dart finish and averaging over 113.

Taylor is now 11/2 with official betting partner William Hill to remain unbeaten throughout the final six weeks of the league season. Wade has now been installed as the 15/2 second favourite to win the McCoy's Premier League Darts - behind William Hill's 1/2 favourite.

The McCoy's Premier League Darts continues at the Capital FM Arena in Nottingham next week, while Anderson is now scheduled to play twice in Sheffield on April 12 to make up his game in hand.

Andy Hamilton defeated World Champion Adrian Lewis 8-4 to claim his first victory since the opening week of the McCoy's Premier League Darts at the Motorpoint Arena in Cardiff.
Hamilton dominated throughout the pair's rematch of January's World Championship final as he gained revenge for that Alexandra Palace defeat and began the second half of the Premier League season in style.
Hamilton made Lewis pay for a string of missed doubles as he took a 5-1 lead, and despite a rally from the World Champion he held on to take the points.

Lewis actually took the game's opening leg on double five, but Hamilton levelled on tops and punished missed doubles in the next four to take command. Lewis had hit a 180 in leg three but wired two darts at double 18 as Hamilton finished 74, and he then took out 84 in the fourth, double 16 in the fifth and double eight to move 5-1 up.
Lewis hit a 177 in setting up double 16 as he won the seventh, with Hamilton landing double six for the next before the World Champion defied a 180 from his opponent to hold his nerve on double eight to pull back to 6-3. He also gave himself a chance to pull back further in the tenth, hitting a 180 but missing three darts at double 18 and nine as Hamilton produced a killer blow with a 106 checkout. Lewis hit another maximum in the next, which he won on double top to keep his hopes alive, Hamilton replied in kind with his second 180 of the game before sealing victory on double ten.

"Adrian scored well but couldn't finish and I took advantage," said Hamilton. "I've been playing well throughout the Premier League but fortunately I hit my doubles tonight. There were some big finishes there which I had to take out and I did that well. It's all about handling that pressure, and I can be a force to be reckoned with if I keep doing this during the second half of the season. I'm playing good darts and I'm a big-stage player, and I'm getting to get used to the big crowds in the Premier League now." 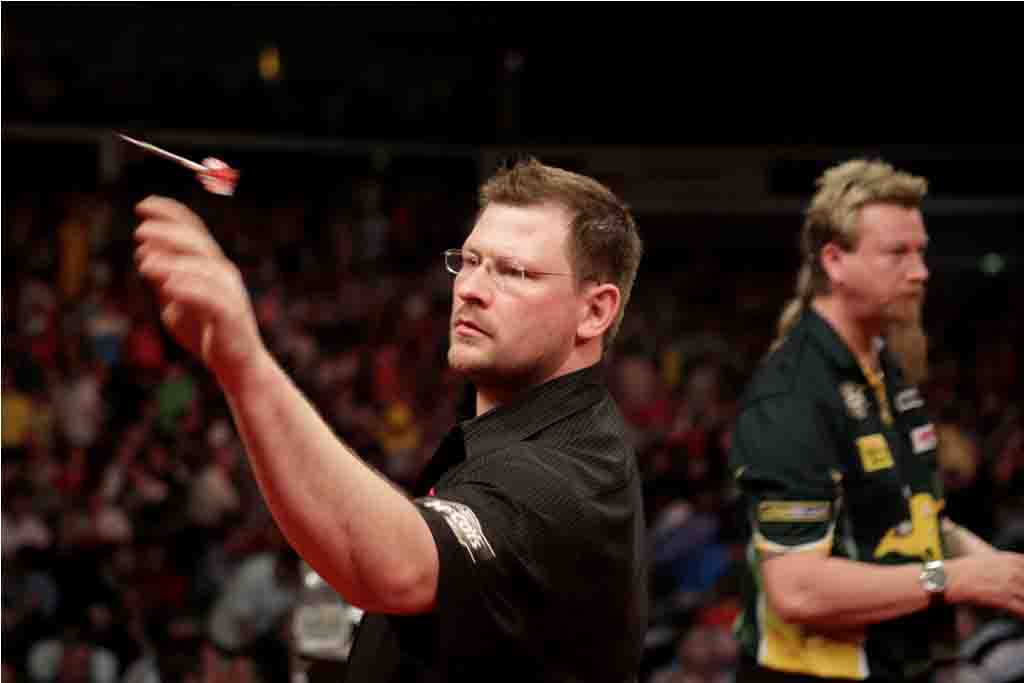 James Wade completed only the third whitewash in the history of the McCoy's Premier League Darts, seeing off Simon Whitlock 8-0 at the Motorpoint Arena in Cardiff on Thursday.
The 2009 champion showed a ruthless streak to demolish the Australian, who was limited to only three darts at a double in the contest.
The victory was Wade's fourth of the season, and moves him above Whitlock into the Play-Off places as he recorded the biggest Premier League win since Phil Taylor's whitewash of Wayne Mardle in 2008.

Whitlock began well by hitting 180s in the first two legs, but was left waiting on a finish as Wade took out double ten and tops to lead 2-0, before a 76 finish put him in command. Whitlock missed the bull for an 82 combination in the fourth, allowing Wade back to follow up an earlier 180 with double six, and he then finished tops in two successive legs to lead 6-0 at the break, the latter completing a sparking 13-darter.
Wade returned to set up a potential nine-darter with back-to-back 180s, but missed a seventh dart at treble 20 and went on to miss a host of darts at a double, giving Whitlock a chance to steal the leg with a dart at the bull. Whitlock, though, could not convert the opportunity and Wade returned to hit double one to move 7-0 up, and he added a further maximum to open the eighth leg before hitting double five to finish 90 for a 12-darter in sealing the whitewash.

"I'm really pleased with how I played but it's not nice as a professional to beat another player 8-0," said Wade. "I could see Simon was struggling but I had to get the job done. It's not nice to beat someone by that score, or for someone to not be involved in the game like Simon wasn't there tonight - but then I thought back to being 6-0 down against Simon last time we played and I know he'd have tried to beat me 8-0. I'm probably not as ruthless as other players but that's not in my nature. It's a good win for me though and it could be important when we get to the Play-Offs."

Phil Taylor completed a McCoy's Premier League Darts double over Kevin Painter with a thrilling 8-2 victory at the Motorpoint Arena in Cardiff, as he continued his relentless charge in the tournament.
The 15-time World Champion extended his unbeaten record to eight matches this season with a seventh successive victory, averaging a superb 113.30.
Taylor had hit a nine-darter in defeating Painter in Aberdeen, and twice hit six perfect darts in this game, having to settle eventually for a ten-darter which completed a comprehensive triumph.

Taylor secured an immediate break of throw with a 14-dart finish in the opeing leg, and hit scores of 180, 132 and 165 in taking the second. He then finished double 12 for a second successive 13-darter in moving 3-0 up before kicking off the fourth with a 174, as Painter replied with a 180 but missed tops to get on the scoreboard as Taylor moved 4-0 up. Painter landed another maximum to leave 20 as he got off the mark with a 13-darter in the fifth, and he finished 70 in the next to break Taylor's throw and pull back to 4-2.
A two-dart 76 from Taylor saw him regain his advantage in the seventh, and a 13-darter completed on tops moved him 6-2 up before he kicked off leg nine with back-to-back 180s. He missed a seventh dart at treble 20, setting up 81 as Painter returned to miss tops for a 76 finish and allow the world number one back for an 11-darter as he finished the combination in two darts on double 12. Taylor then set up a second nine-dart chance by kicking off the next leg with a 174 followed by a 180, this time hitting the treble 20 when needing 147 only to miss the treble 17. He would, though, land treble 18 to leave 16 and, with Painter way back, hit double eight for a sensational ten-dart finish to complete a fine win.

"I'm delighted with that win and it's another step for me towards making sure I'm in the Play-Offs," said Taylor. "It's about winning and I've done that, but it's great to do it so well because Kevin pushes you all the way. He never gives in, he tries on every dart and it's the sign of a true professional. I loved every minute."
Taylor is now 11/2 with official betting partner William Hill to remain unbeaten throughout the final six weeks of the league season, and he added: "It's my objective to win every match and to win the final. The other players just want to make the top four but I'm looking at the final because I want the trophy back from Gary Anderson."

Painter admitted: "I went into the game positive and I'm disappointed I didn't play a little bit better. I could have nicked another couple of legs and if it had been three-all at the break it might have been different, but when Phil's in that mood, you're not going to win. I've got my two games against him out of the way now and I can try to push on from next week onwards. I've not played too badly there but I need to hit a few more doubles." 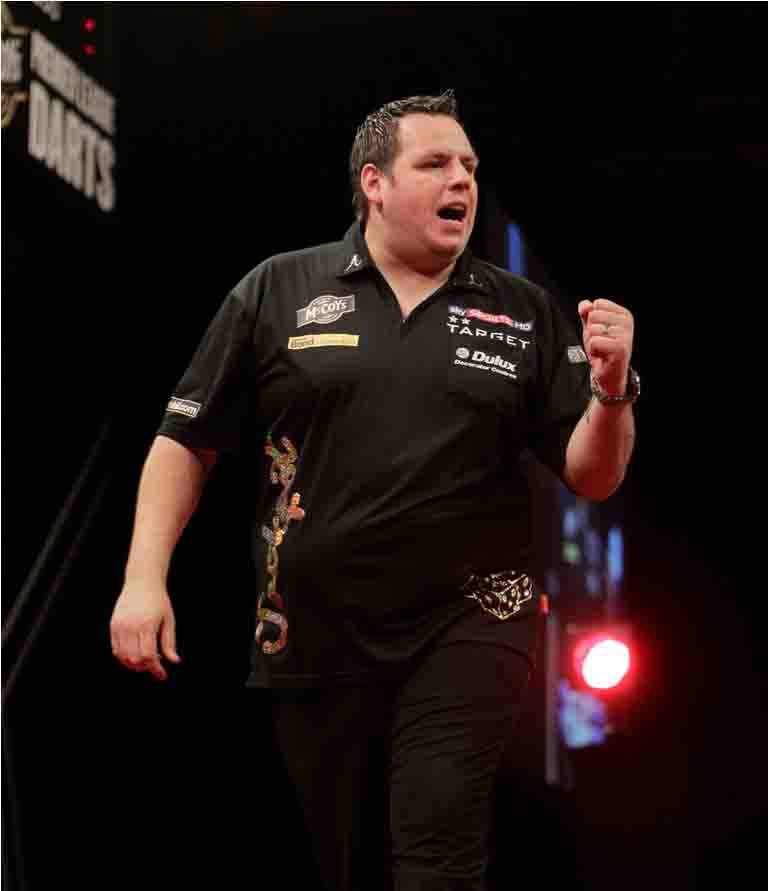 Adrian Lewis bounced back from his earlier defeat to Andy Hamilton at the Motorpoint Arena in Cardiff with a fine 8-2 McCoy's Premier League Darts win over Raymond van Barneveld.
The World Champion had been punished for a poor finishing display in the night's opening match in Wales, as he stepped in to play twice in the absence of Gary Anderson, who was attending his father's funeral.
Lewis, though, made amends with three ton-plus finishes and an 11-darter in a fine display against the Dutch great.

Lewis set the tone for the encounter in the opening leg, with van Barneveld hitting a 180 to leave 58 only to see the Stoke youngster bring the sell-out Cardiff crowd to its feet with a 160 checkout. He then punished a missed double 14 from van Barneveld to win the second on double five before finishing 90 in two darts for an 11-darter to lead 3-0. Lewis then landed a maximum in the fourth leg, but missed five darts at a double to allow van Barneveld in on double eight to get off the mark, before the Dutchman produced an 11-darter of his own to pull back to 3-2.
Lewis, though, took a key sixth by hitting a 180 and double ten to lead 4-2 at the interval, and then took out 106 after the restart to move three legs clear. Finishes of double 16 and 110 put him into a 7-2 lead, and he went on to seal victory by finishing 70 in two darts on double eight.

"I'm pleased to come out of the night with two points," said Lewis. "I was setting my sights on playing Raymond and then when Gary unfortunately lost his father I found out that I'd play twice and that's difficult to prepare for. Andy Hamilton took his chances really well in the first game and fair play to him, but I did the same against Raymond. The 160 in the opening leg was important because he'd hit a 180 to leave a finish and I knew the 160 had to go in, and I didn't look back. I knew I was playing well - even against Andy my darts which missed were around the wire - and I know my form's coming back, and I felt comfortable."