Phil Taylor moved clear at the top of the McCoy's Premier League Darts table as he defeated Andy Hamilton 8-3 at the SECC in Glasgow on Thursday, while Simon Whitlock, James Wade and Raymond van Barneveld also picked up wins.

Taylor maintained his unbeaten start to the season in style as he dropped only three legs against the World Championship finalist, winning his fifth successive game. Hamilton took out 150 and an 11-darter to lead 2-1 early on, but was unable to match Taylor's consistency as the world number one took seven of the game's final eight legs.
Taylor takes on James Wade as the Premier League makes its Dublin debut next week, with the 2009 champion on a high after defeating World Champion Adrian Lewis 8-5.

Simon Whitlock moved second in the table following an 8-6 win over reigning champion Gary Anderson, the Scot who endured a nightmare on his doubles in front of the Glasgow crowd.

Raymond van Barneveld defeated Kevin Painter 8-5 in the night's other game to join his opponent, Wade and Anderson on six points in the league table.

James Wade continued his resurgence in the McCoy's Premier League Darts with an 8-5 defeat of World Champion Adrian Lewis at Glasgow's SECC.
The 2009 champion won his third successive match in the tournament as he left Lewis without a victory going into next week's seventh league night in Dublin.
Lewis hit seven 180s in the contest, but was punished for inconsistency in his scoring as Wade took a key 5-2 lead early on before going on to complete the win.

Wade made an ideal start by opening with a 180 and hitting double ten for the opening leg, before Lewis levelled with a 12-darter. Wade, tough, would win the next three without Lewis having a dart at a finish - taking out a key break on double ten in the fourth leg of the match as he moved 4-1 up. Wade produced a sparkling 11-darter to take the sixth, before Wade countered with a 114 checkout to lead 5-2.
Lewis finished 106 to win his third leg and hit double four to break for the first time in the game as he pulled back to within a leg. Wade, though, traded 180s with the World Champion before denying him the chance to level in the tenth, landing double two to move 6-4 up and firing in a 14-darter despite another maximum from Lewis to earn at least a draw. Lewis hit his second 11-darter of the game, which included his seventh 180, to win a fifth leg, but his hopes of snatching a point were dashed when Wade fired in a 180 and double top to seal victory.

"I'm not playing my best darts at the moment but it's another two points which I'll take gladly," said Wade. "It's coming good and I'm getting a little bit of rub of the green, and I took my chances well at times."

Lewis admitted: "Everybody goes through a slump and it's one of those times for me at the moment, but I'll be back - I'm not two-time World Champion for nothing. I'm going through a rough patch and everybody can see that. I'm going 180 and then 60, but I was happy with my finishing tonight. That was better compared to the last three or four weeks and I'll keep practising to work my way back to the consistency which took me to two World Championship titles."

Simon Whitlock silenced Gary Anderson's Scottish crowd with an 8-6 victory over the reigning McCoy's Premier League Darts champion at the SECC on Thursday night.
The Australian won his third game of the Premier League season and jumped above the Scot in the league table with the triumph, holding his nerve as both players suffered on their doubles at times during an edgy contest.

Whitlock punished three misses from Anderson to break in the opening leg, only to then waste five darts to double his lead as the Scot posted tops to level. Anderson finished the same bed to win the third leg, following three misses from Whitlock, before the Australian powered home a 164 checkout to win the fourth - showing no nerves on the bullseye. However, he would miss two further doubles in the fifth as Anderson edged 3-2 up, with the pony-tailed ace having hit just two from 14 attempts at doubles.
That would change as he won the next three legs without reply, opening leg six with a 180, finishing double two to break and then taking out a key 104 - with Anderson waiting on 36 after hitting a maximum - to lead 5-3. Anderson finished 93 to hit back before Whitlock landed tops for a 13-darter to lead 6-4 before the pair traded 14-dart finishes as the Australian secured at least a point. Anderson punished a missed match dart from Whitlock to win the next on double two and force a decider, but the Australian opened with a 180 and, despite a 174 from the Scot, was first to a finish as the took out tops for a 14-dart winning leg.

"I probably could have made it a lot easier for myself but I'm very happy to get the win," said Whitlock. "I missed a lot of doubles and, credit to Gary because he came back at me. Last season I lost both matches to Gary, so to get one back is great for me and keeps me up there in the table. I'm taking one game at a time and battling away."

Anderson admitted: "I've never been as nervous in my life - I was shaking like a leaf - because I wanted to play so well in front of my home crowd. The support was fantastic but I was very nervous, even after four or five legs. It's disappointing for me but I'm still trying to get back to my best and I'll get back on the practice board before Dublin next week." 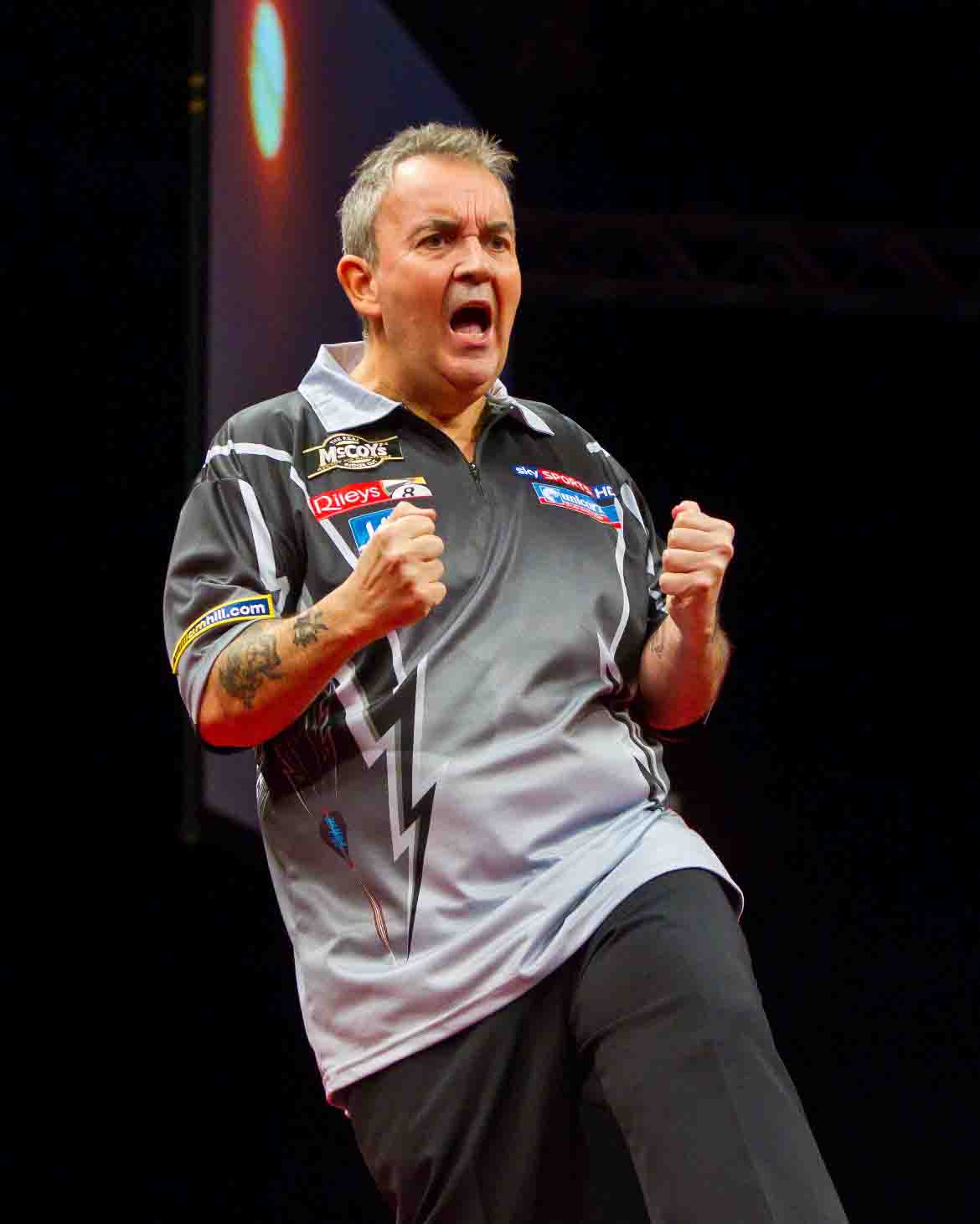 Phil Taylor moved clear at the top of the McCoy's Premier League Darts table as he defeated Andy Hamilton 8-3 at the SECC in Glasgow.
Taylor maintained his unbeaten start to the season in style as he dropped only three legs against the World Championship finalist, winning his fifth successive game.
Hamilton led early on but was unable to match Taylor's consistency as the world number one took seven of the game's final eight legs.

Taylor opened with a bang, hitting a 174 in a 13-darter to win the opening leg before Hamilton landed a 150 checkout to level and a brilliant 11-dart finish to break throw and lead 2-1. Taylor replied by landing double ten to break back and tops to lead 3-2, after Hamilton missed a tricky bullseye for a 132 checkout, before legs of 13 and 14 darts moved the 15-time World Champion 5-2 up.
Hamilton posted double two to win his third leg of the game in the eighth, but Taylor hit back with a 180 and an 86 finish for a 12-darter to regain his three-leg cushion. Hamilton paid for failing to set up a double when on 88 in the next as Taylor finished 78 to move a leg away from the win, which he sealed in style by hitting a 177 and a 104 checkout in another 12-darter.

"The scoreline looks comfortable but it wasn't, it was hard work for me," said Taylor. "I didn't realise I'd averaged 106 but sometimes you don't realise how well you're playing during the match and it's all about getting the win. I want to win this title back and I want to win every game, want to win convincingly and go to the Play-Offs with everybody scared of me! I'm trying hard to improve every week and I'll keep doing so over the next two months."

Raymond van Barneveld picked up his second victory of the McCoy's Premier League Darts season with an 8-5 win over Kevin Painter at Glasgow's SECC.
The popular Dutchman delighted the sell-out Scottish crowd by claiming the two points in a nervy contest, which saw nine out of the 13 legs won against the throw.
Painter led twice but paid the price for ten missed doubles as the Dutchman won five of the final six legs to take the win.

After Painter broke in the opening leg on double top, van Barneveld hit a 180 in breaking back before finishing a 13-darter on double 16 to lead 2-1. Painter produced a classy 157 checkout to level and landed a maximum of his own before posting double eight to punish misses from van Barneveld to lead 3-2. A 68 finish from van Barneveld levelled before Painter took the seventh in 13 darts to move 4-3 up.
However, he was punished for missing doubles for finishes of 130 and 160 as van Barneveld won the next three legs without reply, landing legs of 13 and 14 darts to break and hitting two maximums in the process. Painter hit back with double 15 to pull back to 6-5, but van Barneveld finished a 13-darter to break and lead 7-5 before sealing the win in 14 darts on double 16.

"It wasn't the best game we've both played but at the end I've got the two points," said van Barneveld. "I lost to Phil with a 106 average a few weeks ago, and I'm happy just to get the two points this time. I don't think I played as well as in recent weeks but it's a good win for me. I'm working hard and I know I'll get back to my best, I'm getting there."