Taylor maintained his unbeaten start to the Premier League season with a crushing defeat of Anderson, who took the game's second leg but was unable to apply any further pressure. The world number one hit four 180s and a 107 finish in taking seven successive legs as he swept to a fourth victory of the season, which moves him three points clear at the top of the league table.

Anderson remains second in the table on six points, but was joined on that total by Kevin Painter, who recorded his third victory of the season with an 8-5 comeback win against Andy Hamilton. The World Championship finalist led 4-2 early on, but Painter won six of the final seven legs to take the spoils.

Whitlock moved up to fourth on five points as he defeated World Champion Adrian Lewis 8-4 in a heavy-scoring contest, hitting eight 180s to the Stoke star's seven. Lewis shared the first four legs, but saw Whitlock run away with the game by winning six of the next eight.

2009 champion James Wade picked up his second successive victory, defeating Raymond van Barneveld 8-6 despite leading the contest 6-1 before the Dutchman hit back to force a deciding leg. Taylor has now moved in to 8/13 to win the McCoy's Premier League Darts with William Hill, the official bookmaker of the tournament, with Anderson moving out to 5/1 following his defeat in Brighton.

Kevin Painter came from 4-2 down to win his third game of the McCoy's Premier League Darts season with an 8-5 defeat of Andy Hamilton.
The Players Championship winner bounced back well from his loss to James Wade in Exeter a week ago to take the two points in Brighton, although he was forced to show his fighting qualities to battle from behind.

Hamilton - fresh from his visit to Eton College earlier this week - started well to win three of the first four legs, hitting scores of 180, 177 and 174 and an 11-dart finish in the process. The World Championship finalist had also missed four darts to win the second leg, which had seen Painter get off the mark on double 15. Painter finished 74 on tops to win the fifth before Hamilton took a 4-2 lead with double 16. Painter, though, took the next five with a superb run of form, hitting 180s in successive legs as he levelled before finishing 110 to lead 5-4.
The duo traded 180s in the tenth, but Painter took out an 11-darter to win a crucial break of throw and lead by two legs before he punished three missed doubles from Hamilton to move 7-4 up with a 48 checkout. Hamilton switched from the double top which had proven elusive to land double 16 in the next, but was left waiting on a finish as Painter sealed an 8-5 victory on double eight.

"I'm delighted with the two points and it's a good win for me," said Painter. "Andy and I are favourites to come bottom and we're trying so hard to prove everybody wrong, but I'm loving the competition. I thought I started alright tonight but the first few legs were nip and tuck and I feel like I should have been level at the break. When you're 3-1 down you have to come out fighting and I did that. I'm a battler and being 3-1 down isn't anything to me. "The leg to level at four-all was the most important because it broke his throw, and at 5-3 it would have been harder for me, but he let me in for a couple of legs and I took my chances." 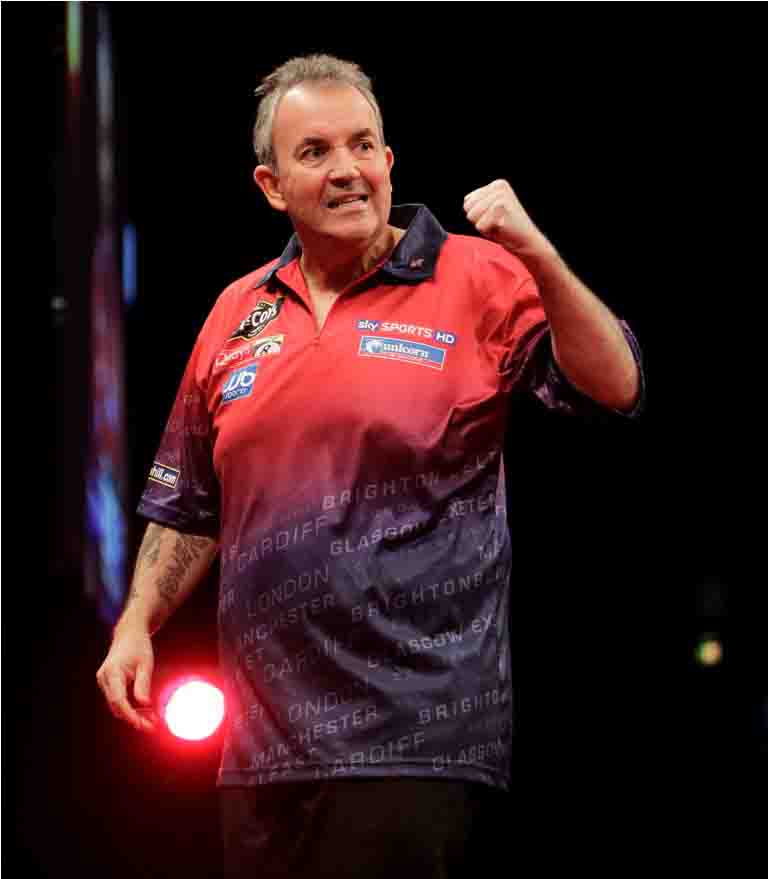 Phil Taylor stormed to his fourth victory of the McCoy's Premier League Darts season as he defeated reigning champion Gary Anderson 8-1 at the Brighton Centre.
Taylor followed up last week's Premier League record average of 117.35 with a merciless display against the Scot, dropping only one leg.

Anderson had shared the opening two legs - with Taylor hitting a 180 in the first before the Scot replied in kind and took out double top at the first time of asking in the second. That would prove to be the last leg he won as Taylor hit top gear, reeling off seven successive legs to take the two points. He hit a 171 and double three to win the third leg and broke in the fourth, landing a maximum to have enough cushion to miss two darts at double eight before returning to hit the bed.
The duo traded 180s in the fifth before Taylor took out 82 for a 4-1 lead, and he then broke throw for a second time when Anderson missed two darts to finish 68, landing double 16. Taylor hit a 180 to set up a 90 finish as he moved 6-1 up, punished Anderson in the next when the Scot failed to follow up a maximum by closing out the leg as the Stoke great finished 107 on double 14, before he took out double eight to seal the win.

"I'm very pleased with that," said Taylor. "The scoreline looks comfortable and I was expecting more from Gary because we know how good he can be. He struggled tonight and I sensed that. I had to take my chances and I did that well, and it's a good night's work."

Anderson admitted: "I'm very disappointed. The fourth leg was crucial and I made a mess of it, and Phil pulled away from there. I've got to get back to the practice board ahead of Glasgow next week because I want to play well there. I'll give it my best in the Players Championships this weekend and I'm looking forward to getting back to Scotland next Thursday."

James Wade held off Raymond van Barneveld's fightback before picking up his second successive McCoy's Premier League Darts victory with an 8-6 triumph at the Brighton Centre on Thursday.
The 2009 Premier League champion had overcome Kevin Painter to claim his first win of the campaign last wek and maintained the momentum by seeing off the Dutchman.
Van Barneveld battled back well to hit back from 6-1 down to trail just 7-6, but was unable to win the deciding leg to grab a draw as Wade eventually closed out the win.

"I did a good job on Raymond early doors but I shut off and I'm not happy with that," said Wade. "I felt brilliant for three or four legs and then felt rubbish but that's how I'm playing at the moment. I've got to keep my foot on the gas but I got the win and it's another step in the right direction. I want to play great darts but I'm not at the top of my game at the moment."

Wade made a brilliant start to the match, opening with a 180 and finishing 98 for an 11-darter to win the first leg. Van Barneveld replied in kind with a maximum and an 81 finish to take the second leg in 11 darts of his own, but he was punished in the next two, missing the bull for a 161 checkout in leg three and double 18 in the fourth as Wade posted tops and double ten to move 3-1 up. Wade then finished 110 and 154 in successive legs and landed two 180s in another 11-darter to lead 6-1 and edge towards victory.
Van Barneveld kick-started his challenge with a 180 in the eighth leg, which he won on double 16 before finishing a confident 89 for back-to-back 14-darters. He hit double four to win the tenth and pull bck to 6-4 before a missed bullseye, for a 122 checkout, allowed Wade to post double two to secure at least a point at 7-4. Van Barneveld hit the same bed to win the next and, when Wade missed double 14 for the match, he posted double ten for a 13-darter to send the game into a decider. However, Wade hit four ton-plus scores to be first to a finish, and he landed his favourite double ten to ensure victory. 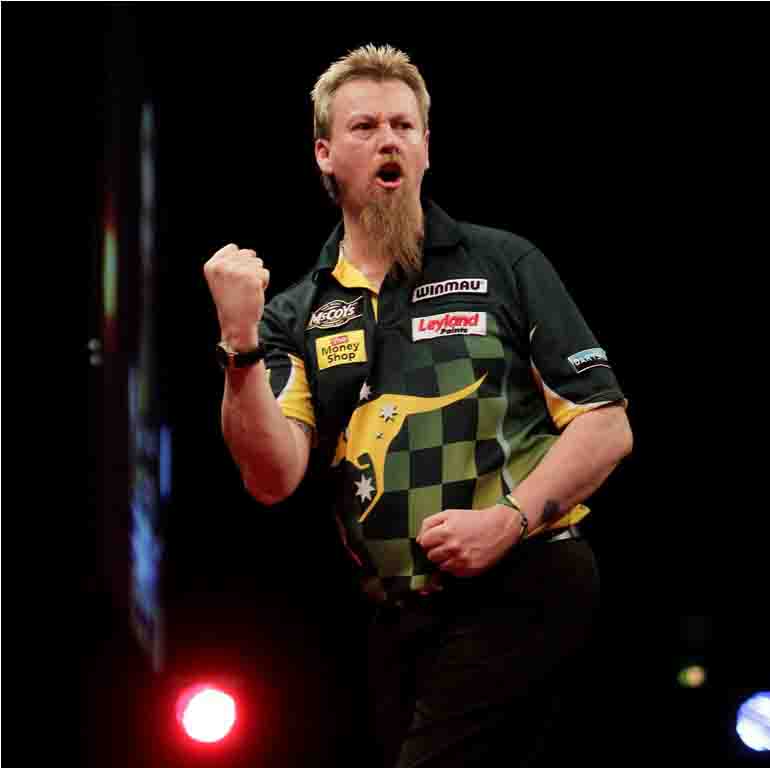 Simon Whitlock picked up his second victory of the McCoy's Premier League Darts season with an 8-4 win over Adrian Lewis which leaves the winless World Champion bottom of the league table.
The pair hit 15 180s between them in a high-scoring encounter, but Whitlock's stronger finishing saw him take six of the game's final eight legs as Lewis fell to a second successive defeat.

The World Champion began well, kicking off the match with a 180 only to see Whitlock finish 118 for the opening leg. Both players hit maximums in the second, which Lewis won in 14 darts on double 14 before he was denied a chance at a finish in the third following another 180 when Whitlock took out tops. Whitlock then hit back-to-back maximums in the fourth to leave 24, but Lewis followed up his fourth 180 in as many legs by finishing 74 to level at two-all. However, Lewis saw his chance to break slip away in leg five, and Whitlock pouned to hit double eight before breaking on double ten in the sixth to lead 4-2.
Lewis broke back in the seventh, following six missed doubles from the Australian, and hit a 180 in the next, only to see Whitlock finish 68 to lead 5-3. Whitlock then hit a 180 in a 13-darter to take leg nine, and the pair traded 180s in the tenth as the world number five punished two misses from Lewis to take out 61 and move 7-3 up. The pair both landed their seventh 180s of the match in the next, as Lewis punished three missed match darts from the Australian by landing double four, but he could only watch on as Whitlock posted another maximum and double 16 to close out the win.

"It felt really good tonight, I was aggressive and I enjoyed it," said Whitlock. "I had a 105 average last week and played fantastic against Phil, and I played well again. I don't get too many wins over Adrian but I took my chances, so it's a fantastic win."