Phil Taylor recorded the highest-ever average in the history of the McCoy's Premier League Darts at 117.35 as he defeated Simon Whitlock on Thursday night, as James Wade, Raymond van Barneveld and Gary recorded victories at Exeter's Westpoint Arena.

Taylor has recorded two 112-plus averages so far this season and hit a nine-darter in Aberdeen, but brought a 4,000-strong crowd to its feet at the Westpoint Arena with a stunning 8-4 win over the Australian. Whitlock played his part in a classic, but could do little in reply to Taylor's consistent barrage as he recorded the second-highest televised average in history and the highest since the Premier League was introduced in 2005.

The night in Exeter also saw reigning champion Gary Anderson continue his resurgence, as he followed up last week's win over James Wade with a brilliant 8-1 defeat of Adrian Lewis. Anderson denied the World Champion a dart at a double in taking a 4-0 lead and also won the fifth before Lewis landed a 13-darter to take what proved to be his only leg, as the Scot strolled to victory in only 19 minutes on the oche.

2009 champion Wade picked up his first victory of the season by defeating Kevin Painter 8-6, hitting three ton-plus finishes in checking out 50 percent of his darts at a double. Holland's Raymond van Barneveld was also an 8-6 winner, but had to come from 6-4 down to win the final four legs without reply in defeating Andy Hamilton to follow up two previous draws this season with his first win.

James Wade picked up his first victory of the McCoy's Premier League Darts season as he defeated Kevin Painter 8-6 at the Westpoint Arena in Exeter.
The 2009 champion had suffered defeat in his opening three matches this season, but landed three ton-plus checkouts in claiming both points against Painter.

Wade did suffered some early nerves on doubles - allowing Painter in to finish 66 in two darts in the opening leg before needing six darts to win the second on double two, after his opponent missed a dart to break - but settled to move into a 3-1 lead with checkouts of 118 and double top. Painter hit a 180 and finished 81 on the bull for a 12-darter in the fifth leg, but Wade added a 117 checkout to lead 4-2 at the break.
Painter took the seventh on double 12, but crucially missed two darts at tops to break back in the next as Wade landed double ten to regain his two-leg cushion. Painter finished 118 in the ninth only to see Wade land a second 117 checkout in the next, with the game of cat-and-mouse continuing as double 16 saw Painter cut the gap to 6-5 before the left-hander tok out tops to ensure a point. Painter took out 68 in two darts to win the 13th and send the match into a decider, but he was unable to break Wade's throw as the 2009 champion was first to a finish and checked out 78 in two dart to seal victory.
/
"It's a big relief to get the win," said Wade. "I didn't play as well as I can do but I did enough and took my opportunities. I'll take this and hopefully I can build on this now. I've always been a scrapper and I'll keep fighting in this tournament."

Painter said: "That's probably my worst performance so far this season. I know I can play a lot better and I've got to up my scoring - I struggled to find the treble 20 bed tonight. "I had a chance to break with the 102 finish and if that had gone in then James' head might have gone down a little at 2-0, but I was poor." 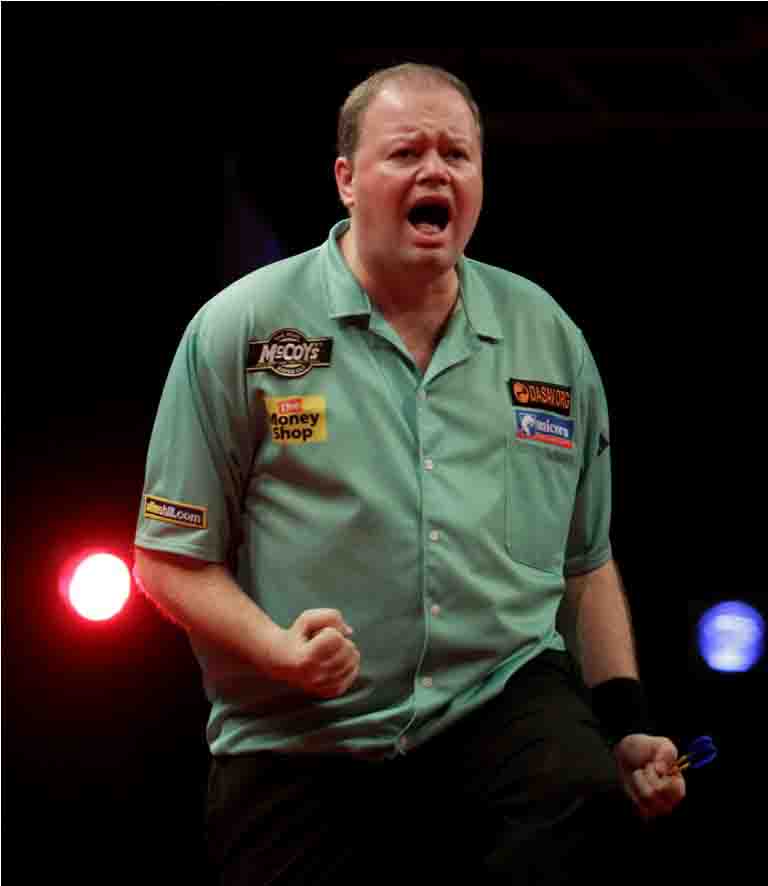 Raymond van Barneveld edged out Andy Hamilton 8-6 in a dramatic finale to claim his first McCoy's Premier League Darts win of the season in Exeter.
The Dutchman maintained his impressive start to the season as he followed up two previous draws and a 106 average in last week's defeat to Phil Taylor by taking both points against the World Championship finalist.
Hamilton had hit six doubles from as many attempts in taking a 6-4 lead, but van Barneveld won the final four legs without reply as the Stoke ace missed four darts to snatch a draw in the final leg.

Van Barneveld made a confident start, hitting a 180 and finishing double 18 for a 13-darter, before Hamilton won the next three, hitting a 177 in a 12-darter to break, as he moved 3-1 up. Van Barneveld took out 72 to take the fifth, but Hamilton won a key sixth going into the break by taking out 66 with the Dutchman waiting on 40 after hitting a 180.
The next four were shared to leave Hamilton 6-4 up, but van Barneveld turned the game with a brilliant spell, hitting 180s in three successive legs, which he won in 11, 15 and 15 darts to move 7-6 up. Hamilton was first to a double in the decider, but missed four darts at double 16 to claim a draw and the Dutchman punished him on double 18 to take both points.

"It was a really good game and I'm very happy to come out with the win," said van Barneveld. "Andy was finishing well but I still believe that I can do great things and I'm fighting hard. I might have given up last year but I don't do that now. I've changed my attitude and believe in how I can play."

Hamilton said: "I'm competing well and I think I should have got a draw there, but I missed those doubles at the end there and I was trying so hard to hit that double 16 - but I'll be back next week!" 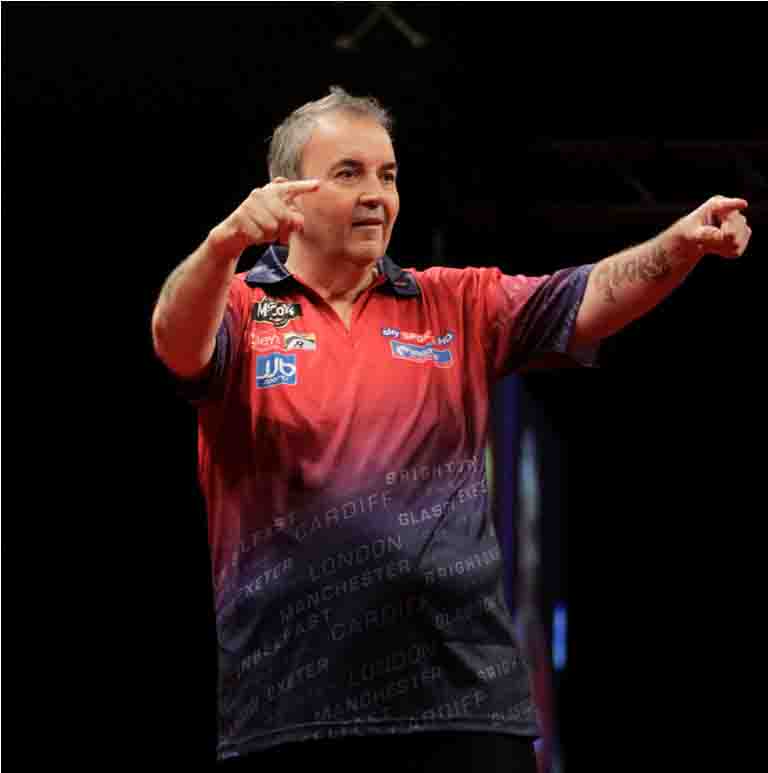 Phil Taylor recorded the highest-ever average in McCoy's Premier League Darts history as he defeated Simon Whitlock 8-4 at the Westpoint Arena in Exeter.
The world number one has enjoyed a brilliant start to the Premier League season, hitting two 112-plus averages and a nine-darter in an unbeaten opening three weeks. However, he raised the bar even further by averaging 117.35 - the second-highest ever on television and a record in the Premier League - as he powered to victory against Whitlock.

Taylor began the game with a break of throw, finishing 64 for a 15-dart leg, before following up a 180 with a 99 checkout in doubling his lead. Whitlock finished 77 on tops to get off the mark in the third leg, but Taylor landed a second maximum and finished 71 to win the next for a 3-1 cushion. The pair traded double eight finishes for 14-dart legs in the next two, and after Whitlock posted a 180 and double two to win the seventh the duo traded 11-darters as Taylor moved 5-4 up.
Although Whitlock had pulled back to within touching distance of the world number one, he was left little chance as Taylor hit top gear to win the next three. He firstly posted a ten-dart finish courtesy of scores of 140, 180, 165 and double eight, before finishing an 11-darter after Whitlock had missed double 16 for a 132 combination. Taylor then completed victory with another 11-dart leg, taking out 90 with bullseye and double top, to secure a record-breaking average and a third successive victory this season.

"I'm delighted," said Taylor. "Simon played really well and pushed me, and those are the types of game where you get these high averages and nine-darters. The main thing was to win and 8-4 shows how much of a contest the game was - but I'm going to try to improve it and I think I can get another two or three points on my average."

Whitlock said: "Phil was fantastic. I thought I played really well and I didn't do a lot wrong and I enjoyed the match, but he was sensational."

Reigning McCoy's Premier League Darts champion Gary Anderson powered to an 8-1 victory over World Champion Adrian Lewis to claim his second successive win in Thursday's final game in Exeter.
Anderson showed no mercy with a fine display in a repeat of last year's Premier League Darts final, which also went the way of the Scot, as he saw off Lewis in only 19 minutes.
Anderson took the first four legs without Lewis even having a dart at a double, hitting two 180s in the process, before the World Champion missed five darts to get off the mark in the fifth as the Scot posted double five for a 5-0 cushion. Lewis produced a brilliant 13-darter to finally break his duck in leg six, hitting a 180 to set up double four, but Anderson dampened his hopes of a fightback by taking out 95 on tops in the next. Lewis also missed four darts at a double in the eighth as Anderson moved 7-1 up on double ten, before a missed bullseye from the World Champion allowed him to secure victory on double six.

"I'm pleased with that but I still believe I'm getting better," said Anderson. "I've had a few days practising with Dean Winstanley coming into this and I'm very happy to have won again. I know I can still improve, so to defeat the World Champion 8-1 is a big result for me."

Lewis admitted: "It's very disappointing and it was a bad day at the office, but I'll get back on the practice board and work hard ahead of next week in Brighton."