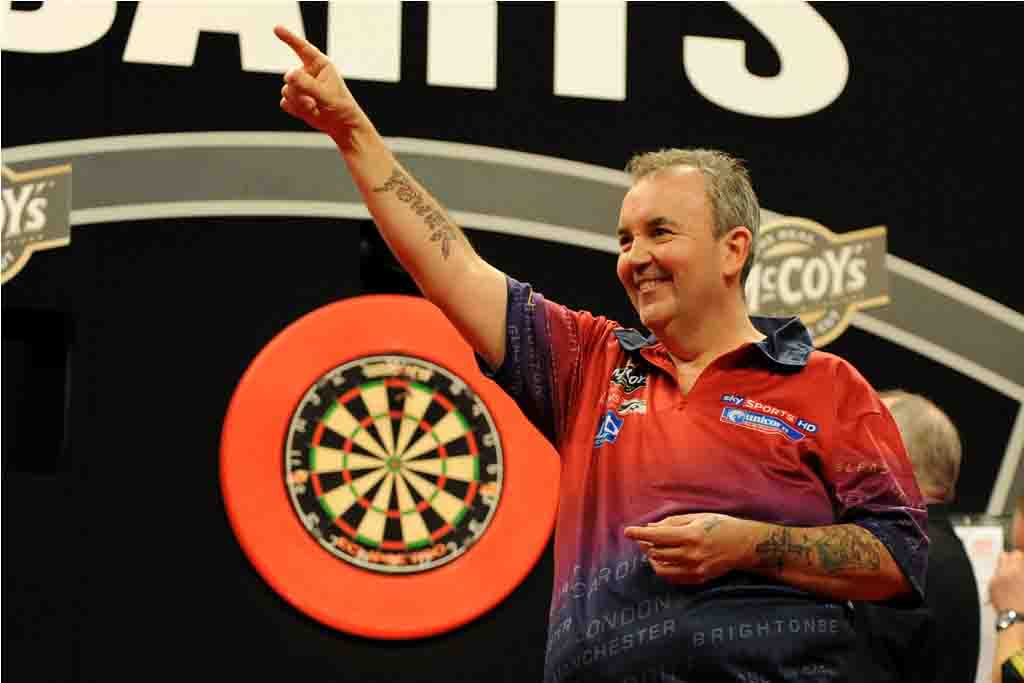 Phil Taylor's incredible start to the McCoy's Premier League Darts season continued as he defeated Raymond van Barneveld 8-4 at the Odyssey Arena on Thursday night, as Gary Anderson and Kevin Painter picked up their second wins of the season in Belfast. World number one Taylor had averaged 112.79 on the opening week of the season in a draw with Adrian Lewis and hit a nine-darter against Kevin Painter in Aberdeen seven days ago. And he produced another stunning performance to see off his long-standing Dutch adversary in style, with his 112.91 average topping his week one display and being the second highest in the tournament's history. It was also the manner of victory which sent another warning to his rivals - winning the first four legs without reply and restricting van Barneveld to just four darts at a double in the game, all of which the Dutchman hit. Van Barneveld pulled back to 6-4 at one stage but his hopes of a comeback were swiftly killed off as Taylor followed up earlier checkouts of 131 and 120 by finishing 94 and 60 in the final two legs. Taylor now sits a point clear of reigning champion Gary Anderson and Premier League newcomer Kevin Painter, who both recorded their second wins of the campaign in Belfast. Anderson hit top form with a 102 average as he came from 4-2 down to defeat 2009 winner James Wade 8-5 in their clash. Painter, meanwhile, recorded an 8-3 victory against Simon Whitlock, while Adrian Lewis and Andy Hamilton shared the spoils in their clash, which was a repeat of January's World Championship final. Lewis has now drawn all three of his games this season, and had to come from 4-1 down to level before hitting an 11-dart finish to grab a point. 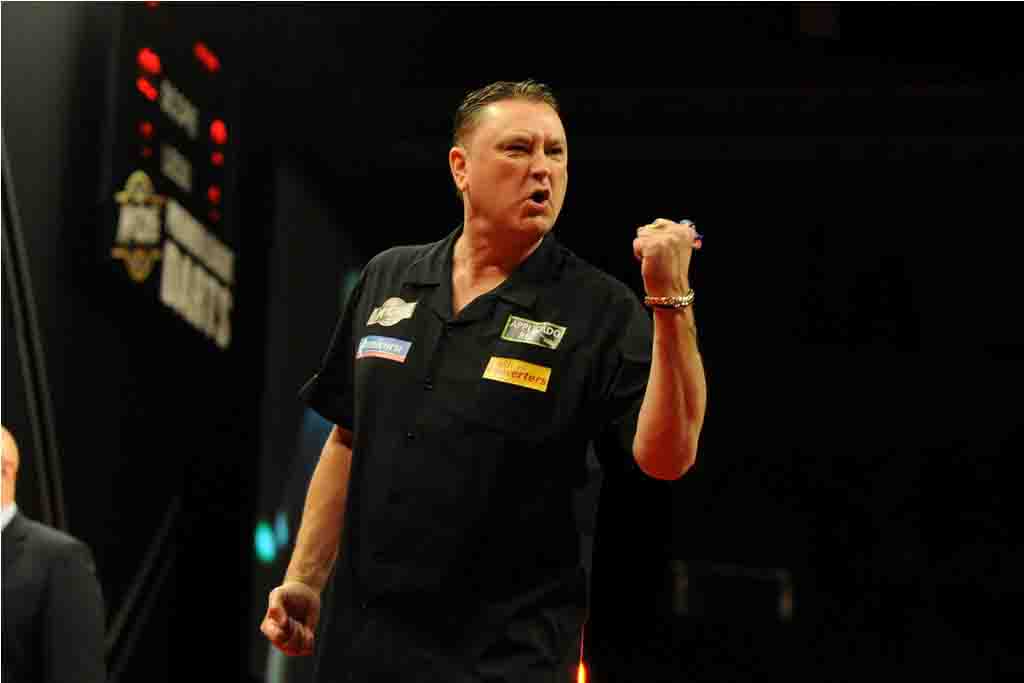 After landing tops to settle any early nerves in the opening leg, Painter broke with a superb 14-darter in the second - checking out 86 - and landed a 180 a double 16 to win the third. Whitlock finished double five to punish a miss from Painter in the fourth, and landed tops in the next to pull back to 3-2. However, he would let a golden opportunity to level go begging in leg six, missing two darts to square the match as Painter followed up a 180 by hitting double eight.
Double 16 put Painter 5-2 up before Whitlock opened leg eight with back-to-back 180s, and although a potential nine-darter went begging he did take the leg in 14 darts to win his third of the match. Whitlock, though, would miss a total of four darts at a double in the next two legs as Painter hit double four and then took out 84 on double 11 to lead 7-3 before posting double ten for both points.

"I've come into the Premier League, like Andy Hamilton, very much an underdog but I've won two games out of three and I'm doing alright," said Painter. "I don't think Simon started very well and I continued like I have for the last few weeks - I'm starting well, and when I get a double I'm hitting it. My finishing has been good ever since I won the Players Championship in Doncaster in December and if I can up my scoring a little bit I can do some damage in this tournament. I'm really enjoying it and the Premier League's bringing the best out of me."

Adrian Lewis hit an 11-dart finish to snatch a draw with Andy Hamilton in their McCoy's Premier League Darts clash at the Odyssey Arena in Belfast on Thursday night.
The Stoke pair played out a thriller in a repeat of January's World Championship final, with Hamilton leading 3-0 early on before Lewis hit back to level.
However, the World Champion could never get ahead, with Hamilton moving 7-6 up with a 13-darter before Lewis grabbed a share of the points with an 11-darter in the final leg - meaning he draws for a third successive week.

"It was a great game," said Lewis. "Andy battled well and hit the right shots at the right time to put me under pressure. I didn't put him under as much pressure as I wanted to and I was patchy. I've still not lost a game and if I win next week I could be in the top two, so it's a good start."

Hamilton made a fine start, finishing 68 on double 16 in the first leg, double nine to break in the second after two misses from Lewis, and also taking the third to lead 3-0. Lewis hit a 180 and a 130 checkout in taking the fourth to get off the mark, but Hamilton replied by setting up double eight with a 168 score in the next. Lewis pulled back to 4-2 on double ten and hit a 180 in the next to leave 44, which he took out on tops, before the duo traded maximums in the eighth, as Hamilton missed double 16 to allow him in on double eight to square the match.
Hamilton hit a 180 and finished 85 for a brilliant 12-darter to move back in front at 5-4, but was punished for four misses in the next as Lewis recovered from some shaky doubling to land double two. Another 180 from Hamilton helped him to win the 11th, which he took on double four, and the pair again swapped maximums as Lewis levelled once more in leg 12 on double six. Hamilton produced his sixth maximum of the match in taking the next with a 13-darter to ensure he would earn at least a point at 7-6, but Lewis kicked off the 14th leg with a 180 and finished 96 for an 11-darter to secure a draw.

"I thought I'd thrown the game away because at 3-0 it was in my hands," said Hamilton. "I got off strongly but didn't take advantage where I should have done but a draw against Adrian isn't a bad result."

Reigning McCoy's Premier League Darts champion Gary Anderson came from 4-2 down to defeat James Wade 8-5 and pick up a second successive victory.
The Scot showed a return to the form which took him to the title last year with a brilliant fightback against the 2009 champion, who also showed glimpses of his best.

Wade took three of the first four legs to hold an initial advantage, finishing double ten in the opening two legs and, after Anderson hit a 14-darter to get off the mark, landing a 107 finish to lead 3-1. Anderson hit a 180 and a 91 finish to reply in 12 darts, but double ten for a 14-darter in reply gave Wade a 4-2 cushion at the break. The Scot hit back strongly to win the next five without reply, finishing double four to win the seventh leg before punishing a missed double top from Wade to level in the eighth.
He then hit legs of 14, 14 and 13 darts move into a 7-4 lead and ensure that he would take at least a point from the game. The pair traded 180s in the next before Wade took out double ten for another 14-darter to stay in the contest, but Anderson's fifth maximum pulled him clear in leg 13 and he also hit a 165 score before sealing victory on double four for a 13-darter.

7 "I've been struggling for eight weeks or so but it's started to come back this week," said Anderson. "The more I played, the worse it got for a while but this performance was a lot more like how I want to play. When I went 2-0 down I was panicking a little bit, but the 180s and 140s were flying in when I was practising before and I was happy that they started to come on stage." 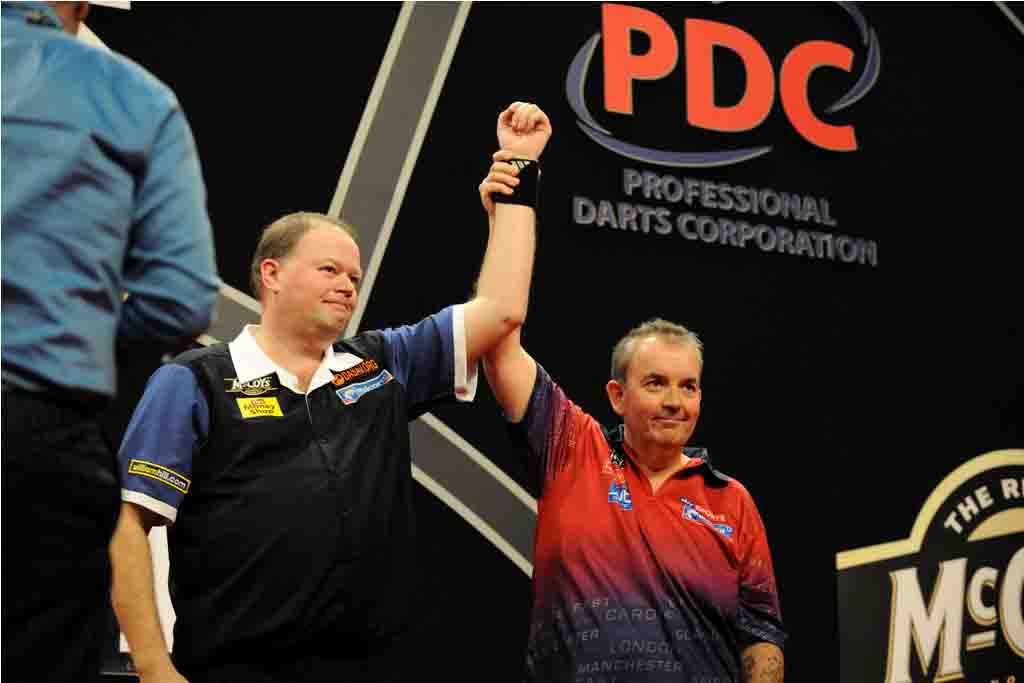 Phil Taylor's amazing start to the McCoy's Premier League Darts season continued as he averaged 112.91 in a brilliant 8-4 victory over Raymond van Barneveld at Belfast's Odyssey Arena.
Taylor maintained his unbeaten opening to the season style with a thrilling performance in front of 8,000 delighted Northern Irish fans, although van Barneveld played his part in a classic.
Van Barneveld averaged almost 106 and hit all four of his darts at a double during the game, but could not match Taylor's brilliance. The world number one had averaged 112.79 in the opening week against Adrian Lewis and hit a nine-darter in Aberdeen as he saw off Kevin Painter - form which he continued against van Barneveld.

"I'm delighted with both the performance and the victory," said Taylor. "I think it's going to be the hardest Premier League ever and I know I have to keep working hard to stay ahead of everyone else. Raymond's getting back to his best and he still inspires me - and I knew I'd have to play like that tonight, but I love seeing him play well and it was a really enjoyable game."

He made a stunning start to the game, finishing 131 for a 12-darter in the opening leg and trading maximums with van Barneveld in the second before hitting double eight. Taylor then broke for a second time in leg three, opening with a 180 and landing double top for an 11-dart finish, before finishing 74 in two darts for a 4-0 lead. Van Barneveld produced a brilliant 11-darter of his own to get off the mark in the fifth, although he could only watch in the next after the pair traded maximums when Taylor finished double eight for a 13-dart finish.
The Dutchman took out 145 to pull back to 5-2 before Taylor finished 120 to trade 12-darters with the Dutchman, who then took out 79 on double 11 and broke with an 80 finish to reduce the gap to 6-4. Taylor, though, clinically denied him the chance to win a fifth leg by opening the 11th with a 174 and finishing 94 on double 16. He then landed scores of 180 and 177 to open the next leg, setting up another possible nine-darter - and although he was unable to land a seventh perfect darts he did return to land tops to complete a memorable victory.

"I really enjoyed the game but there's very little you can do when Phil plays as well as that," said van Barneveld, who averaged almost 106. He hardly gave me a chance and even at 4-0 down I wasn't playing that badly."