Phil Taylor created another slice of history with a sensational nine-dart finish during his McCoy's Premier League Darts victory over Kevin Painter, while home favourite Gary Anderson delighted the Aberdeen crowd with victory on Thursday night.

Taylor hit his 11th televised nine-darter during an 8-5 win over Kevin Painter, as he landed 180, 174 and finished 147 to achieve the feat. The perfect leg came amongst a run of five successive legs as Taylor came from 5-3 down to sweep to victory, averaging 108.27 in the process as he remains unbeaten following two weeks of the Premier League Darts season. Painter had won the game's first three legs without reply and also hit finishes of 127 and 123 in moving 5-3 up before falling victim to Taylor's super-show.

Reigning Premier League Darts champion Anderson, meanwhile, bounced back from his defeat to Painter last week by defeating World Championship finalist Andy Hamilton 8-2. The Scot, cheered on by a sell-out 4,000 crowd at the AECC, won the game's first four legs and, after Hamilton rallied to win two of his own in the middle of the match, punished missed doubles from the Englishman to seal victory.

Australian Simon Whitlock joined Taylor on three points at the head of the table as he defeated 2009 champion James Wade 8-4, having won the game's opening seven legs without reply before the left-hander threatened a fightback.

Adrian Lewis and Raymond van Barneveld shared ton-plus checkouts in the final two legs of an enthralling McCoy's Premier League Darts contest as they drew seven-all at the AECC in Aberdeen.
The duo had opened their Premier League campaigns with draws at the Manchester Arena a week ago, and were again forced to settle for a point following another high-quality contest. Lewis hit back from 2-0 down to lead 5-2 before van Barneveld won four of the next five to level, but the World Champion hit a 140 checkout to move 7-6 up before his Dutch rival posted 126 on the bull for a point.

"It was a great match and I thought I dominated the game," said Lewis. "I had a couple of sloppy legs but I showed a lot of character after he'd got back level and took out a good 140 to go 7-6 up. "I left 51 after nine darts in the last leg and his 126 finish was fantastic. The old Raymond is coming back and it's great to see."

Van Barneveld opened the game in style by hitting three 140s and double 16 to take the first leg in 13 darts, before landing a 180 and double eight to take the second, after Lewis was off-target on double 15 for a 150 checkout. Lewis hit a 180 and finished 100 with two double tops to spark his challenge in the third, and landed another maximum in a 12-dart leg to level.
He then finished double nine in two successive legs - the latter being an 11-darter which began with back-to-back 180s - and finished 64 on tops to win a fifth straight leg in moving 5-2 up. Van Barneveld took the next three legs in 15 darts, taking out 76, 77 and double eight and also landed a maximum in the 11th leg, only for Lewis to take out 70 on tops to lead 6-5.
The Dutch star hit his fourth 180 of the game in a 14-darter as he levelled, only for Lewis to brilliantly check out 140 in the next to ensure at least a point at 7-6. He then opened the final leg with scores of 140, 180 and 130 to leave 51 after nine darts - but van Barneveld had left himself 126 and finished the checkout on the bullseye to grab a draw.

"At 2-0 up I thought it was going to be my night, but he came back really well to go 5-2 up," said van Barneveld. "I got it back to five-all but the 126 was fantastic because Adrian had a brilliant leg to leave 51 after nine darts. "In the last two weeks I've come back to get a point and I'm happy with that."

Reigning McCoy's Premier League Darts champion Gary Anderson picked up his first victory of the 2012 season with an 8-2 defeat of Andy Hamilton at the AECC in Aberdeen.
The Scot had been under-par when he lost to Kevin Painter on the opening night of the season a week ago, but bounced back with a clinical defeat of the World Championship finalist.
Anderson led 4-0 before Hamilton hit back to win the next two, but the home favourite took another quartet of legs to secure the points.

The Scot punished four misses from Hamilton to win the opening leg on double six, setting the pattern for the contest as the Stoke ace began a nightmare on his doubles. Anderson landed double top to take the next two legs before Hamilton posted a 180 in the fourth, only to miss two darts at tops to allow the reigning champion in on 128, which he duly finished on double 16.
Hamilton also posted a maximum in the fifth, and after the pair shared a host of missed doubles he returned to land double one - with his eighth dart for the leg - to get off the mark. Hamilton then hit double 16 to halve the gap to 4-2, but paid for a miss at the same bed in the next when Anderson stepped in on tops to lead 5-2.
Double 18 moved Anderson four legs clear again, and when Hamilton missed the bull for a 170 checkout and two darts at double eight in the next the Scot landed double ten to ensure at least a point. That perhaps relaxed Anderson as he produced his best leg of the game to secure victory, with both players opening with 180s and Hamilton landing a second only to see the home favourite take out 81 for an 11-darter.

"It's nice to get a win but I'm still struggling with my form," said Anderson. "I won with an 11-darter and that was a lovely way to finish, especially for the fans who gave me fantastic support. "It's great to play in Scotland but when you're struggling it adds a little bit of pressure, so it's a relief to get the win. I know I've got a lot of improvement in me and I want to be hitting 120 averages, but I'm a long way off that at the moment." 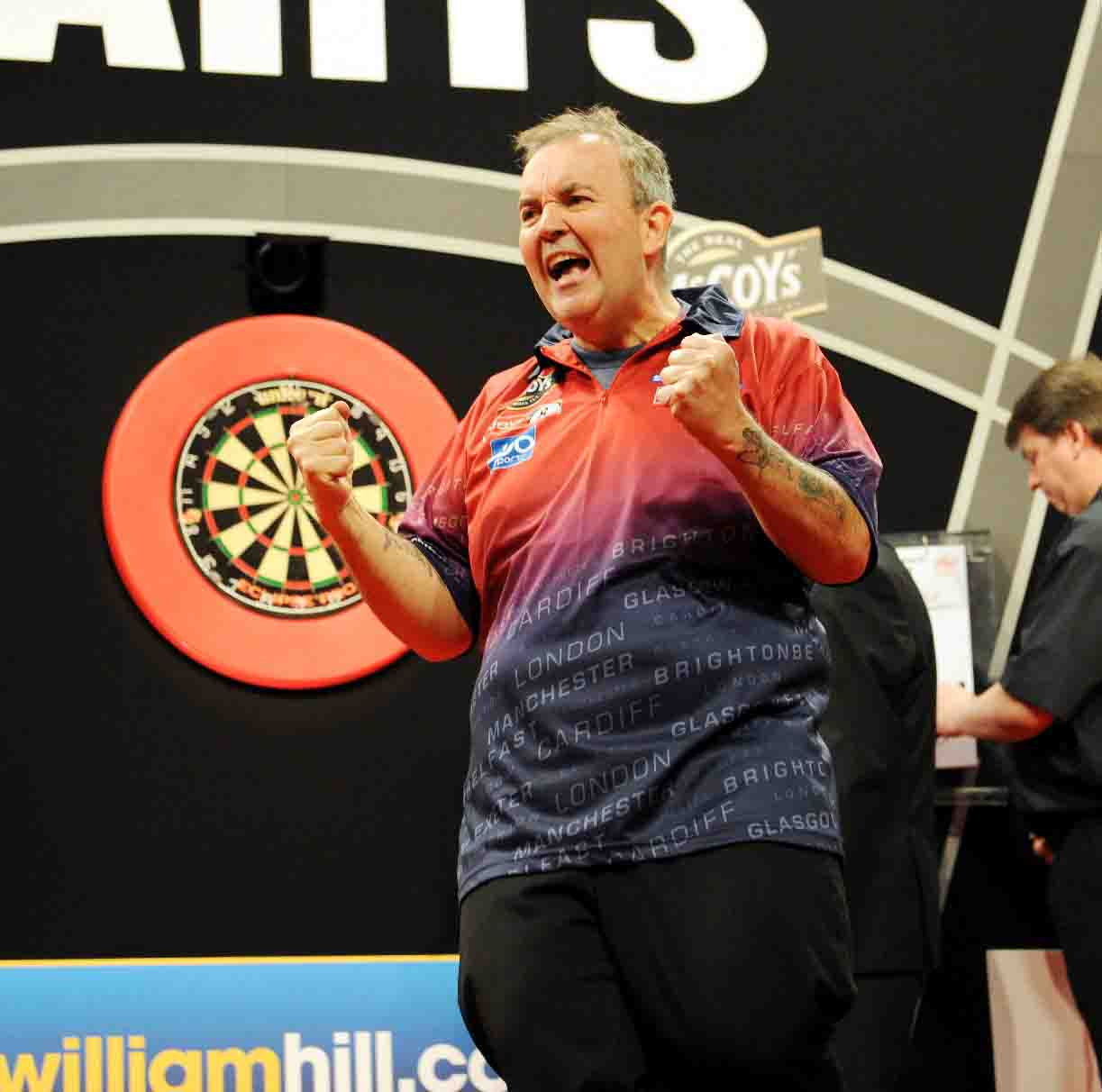 Phil Taylor hit a stunning nine-dart finish in coming from 5-3 down to defeat Kevin Painter 8-5 in the McCoy's Premier League Darts in Aberdeen.
Taylor, who famously landed two perfect legs in the 2010 Premier League Darts final, hit his 13th nine-darter in all competitions in a brilliant performance which brought the 4,000 sell-out AECC crowd to its feet.
Premier League newcomer Painter had led 3-0 and also took out 127 and 123 to move 5-3 up before Taylor won the ninth leg and hit his nine-darter in the next to level. He opened with a 180 and then landed a 174 score before taking out 147 on double 18 to achieve the feat.

He then took out 72, 100 and double eight to secure an 8-5 victory, and said: "I'm overwhelmed to have hit the nine-darter. "Kevin was playing really well and had hit some fantastic finishes to take the lead, and I knew I had to do something extraordinary to crack him. I thought I would do a nine-darter earlier in the match but it came at the perfect time. It's always the tough games that you do something like this because you're not thinking about it, and it shows that everything I'm doing at the moment with my preparation, I'm doing right."

Painter had started the game superbly, landing a 180 in the opening leg and finishing 80 on tops to break throw after Taylor missed a dart at double 16. Taylor would also miss one dart in each of the next two legs as Painter took out double ten and 61 to move 3-0 up. Taylor replied superbly to win the fourth, opening with a 177 and finishing 132 to get off the mark.
Painter finished 127 on double eight to lead 4-1, but Taylor hit a 180 in another 12-darter before posting double top to reduce the gap to one leg. Another ton-plus finish from Painter, who took out 123 on the bullseye, saw him move 5-3 up before Taylor launched an incredible barrage. After finishing double 16 with his third dart to take the ninth leg, Taylor posted his incredible nine-darter to win the tenth and level, before taking out 72 on double 16 to lead for the first time. He landed a 171 and a 100 checkout for another 12-darter to move 7-5 up, and then sealed a memorable victory by following a 177 with double eight.

"Phil's a legend and the nine-darter showed what he's capable of," said Painter. "I was doing quite well at 5-3 up but you always know that Phil can come back. "I think if he hadn't hit the nine-darter I might have got the draw or even the win, but it spurred him on and he played some lovely darts after that. But there won't be many players who will take five legs from him in the McCoy's Premier League so I'm pleased with that. I played well and I'm loving every second of the Premier

Simon Whitlock maintained his unbeaten start to the McCoy's Premier League Darts with an 8-5 win over 2009 champion James Wade.
The Australian followed up last week's thrilling draw with Raymond van Barneveld by continuing his form, taking out half of his attempts at a double as he moved to the top of the Premier League table.

After hitting a 180 and finishing 64 to win the opening leg, Whitlock punished misses from Wade in the next three, hitting finishes of 90 and 80 before posting double six to move 4-0 up. He then took out 66 to win a fifth leg, and broke throw again in the next, with the pair trading 180s but Wade again missing his doubles as the Australian finished tops for a 13-darter. Whitlock returned from the break to finish 48 for a 7-0 lead before Wade sparked his fightback with a tremendous 11-dart finish, hitting a maximum, two 140s and double top at the first time of asking.
He hit the same bed in the next after Whitlock missed tops for the match, and landed double ten in the next two for a pair of 14-darters as he pulled back to 7-4. However, he missed one dart at double top to win a fifth successive leg, and Whitlock punished him by hitting the same bed to secure both points.

"It was a struggle for me but I got the win," said Whitlock. "It felt like my birthday when James was missing all those doubles, but I'll take that every day of the week. I didn't feel totally comfortable during the game but it's great to get the win. I'm in good form and my confidence is quite good, and this is probably my best start to a Premier League season and it feels great."