Taylor back to winning ways as rivals are locked in Liverpool

Phil Taylor bounced back to winning ways in the McCoy's Premier League Darts with an 8-3 defeat of Simon Whitlock on Thursday night, as three draws in the other matches at the Echo Arena in Liverpool left the Play-Off race wide open.
Taylor had suffered his first defeat of the Premier League season when he lost to Adrian Lewis a week ago, and another upset was threatened when Whitlock, aided by a 161 checkout, took a 3-1 lead in their clash.
The 15-time World Champion, though, reeled off seven successive legs to ensure that he will end the regular season at the top of the league table.

Despite the defeat, Whitlock remains second in the table after the other three games in Liverpool were all drawn.

2009 champion James Wade came from 7-4 down to share the spoils with Kevin Painter, who missed two darts to take victory but remains in the hunt for a top-four finish.

Adrian Lewis hit the season's first 170 finish as he shared the points with Gary Anderson, with the result keeping the World Champion fourth but leaving the reigning champion needing a miracle to qualify for the Play-Offs.

Raymond van Barneveld, meanwhile, came from 4-1 down to grab a draw with Andy Hamilton, who posted a 152 checkout in taking command early on only to be pegged back. 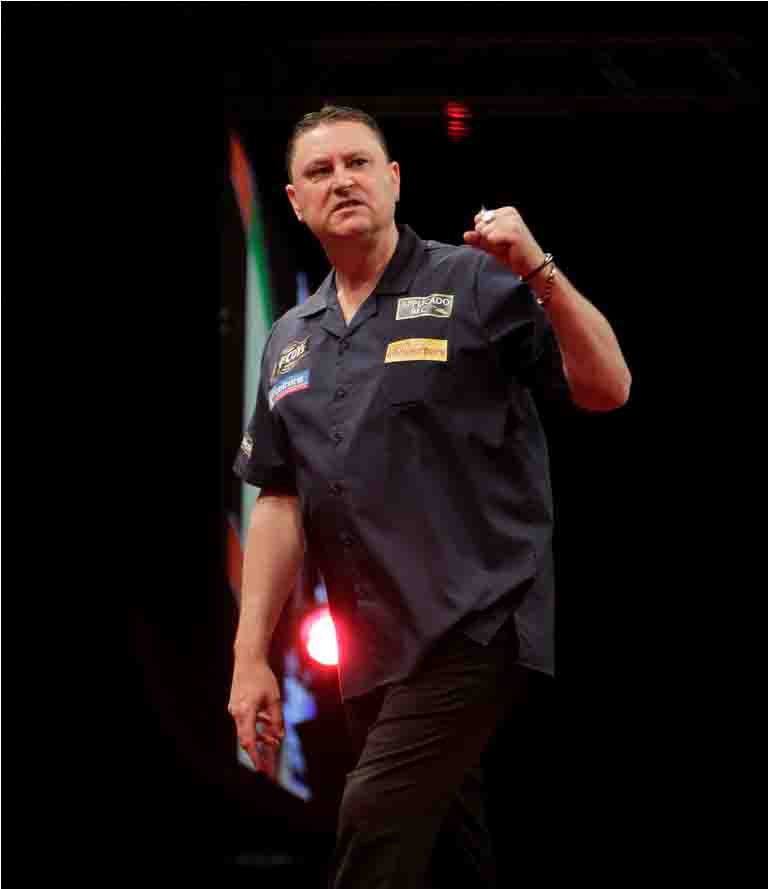 James Wade hit back from 4-1 and 7-4 down to snatch a dramatic draw with Kevin Painter as the pair kept alive their McCoy's Premier League Darts Play-Off challenges with a point apiece at the Echo Arena in Liverpool.
Painter looked set to cause an upset against the 2009 champion when he took command of the match, hitting legs of 11 and ten darts at crucial stages in earning himself a minimum of a draw.
However, he missed two darts to win the game 8-4 as Wade snatched a key 12th leg before the world number three took the final two legs on tops to share the spoils.

Wade, who began the night third in the league table, made a strong start with a 14-dart finish, but Painter replied well, finishing 48 before breaking throw with a 120 checkout - after the left-hander missed double 13 for a 146 kill - and double six to move 3-1 up. He then matched a maximum from Wade and also posted two 140s in a sparkling 11-darter to win the fifth leg against the darts and take a 4-1 lead, although Wade hit back well with finishes of 85 and 96 to reduce the gap to one leg. Painter took out 68 in the eighth, but Wade hit the bullseye to complete a 123 combination as he took the ninth to stay in touch.
He was, though, left waiting on 56 in the next as Painter finished 77 on tops to lead 6-4 before the Daventry ace produced his best leg of the season with a ten-darter, hitting 140, 180, 145 and double 18 to ensure he could not be defeated at 7-4. Painter also gave himself a chance to wrap up both points in the 12th leg, but missed darts at double 12 and six to seal victory, with Wade following up his fourth 180 by finishing double eight to pull back the leg. He then finished tops to win the 13th and force a decider, in which he hit three ton-plus scores before stepping in when Painter could not finish 96 to land double top for a 14-darter and take a point.

"I'm disappointed not to have wrapped the game up," said Painter. "My finishing was good throughout but I was 7-4 up and wired both darts for the match and James punished my missed doubles. I had some good moments - the ten-darter and 11-dart leg - and I should have won the game, but against someone as good as James they will take their chances and he punished me in three successive legs because he's a class player. I need every result to go my way now if I'm going to reach the Play-Offs but I'm playing well and I'll try to get as many points as I can." 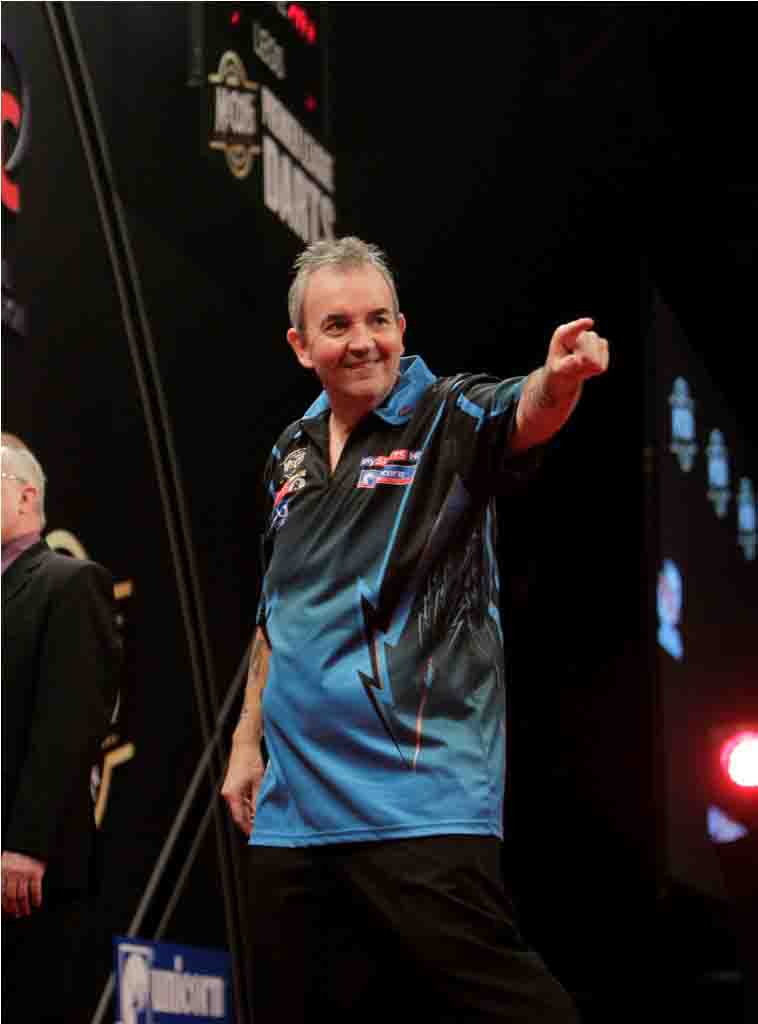 Phil Taylor bounced back to winning ways in the McCoy's Premier League Darts, winning seven successive legs to come from 3-1 down to take victory over Simon Whitlock at the Echo Arena in Liverpool.
Taylor had suffered his first defeat of the Premier League season a week ago when he lost to Adrian Lewis in Bournemouth, and another reverse seemed possible when Whitlock took command.
The Australian hit a 161 checkout in taking a 3-1 lead, but Taylor punished key missed doubles as he charged through with seven straight legs to win his tenth game of the campaign.

Taylor kicked off the game with three 140s in taking the opening leg in 14 darts, before Whitlock replied in 13 before punishing a missed bull for a 161 checkout from the Stoke legend to break in leg three, finishing 65 on tops. The Australian then went one better than Taylor could the previous leg by taking out 161 for a 12-darter as he moved 3-1 up. Taylor finished tops to win the fifth, and levelled the game in a pivotal sixth, opening with a 180 and stepping in following a miss at tops from Whitlock to hit the same bed for a 13-darter to level.
He finished double six to regain the lead despite a 180 from the Australian in the seventh, and when Whitlock missed double 16 in the next Taylor pounced with a 65 finish for a 14-darter to move two legs clear. Taylor then landed two more 14-dart finishes to take a 7-3 cushion, with Whitlock missing two darts at a double in the latter as his hopes of upsetting the five-time Premier League champion faded. Taylor then posted his second 180 of the game in leg 11, and finished tops for a 13-darter to complete a fine comeback.

"Losing last week gave me a kick up the backside and when I went 3-1 down I was a bit worried," admitted Taylor. "Simon played really well and put me under pressure, but he missed a crucial 65 in the sixth leg and that was my chance. I'm delighted to have won again and I know I'm in the semi-finals, but it's very open for the Play-Off places, and it's the best Premier League I've played in. You could see the pressure which Simon was under and the other players are fighting for places too, so it will go down to the wire." 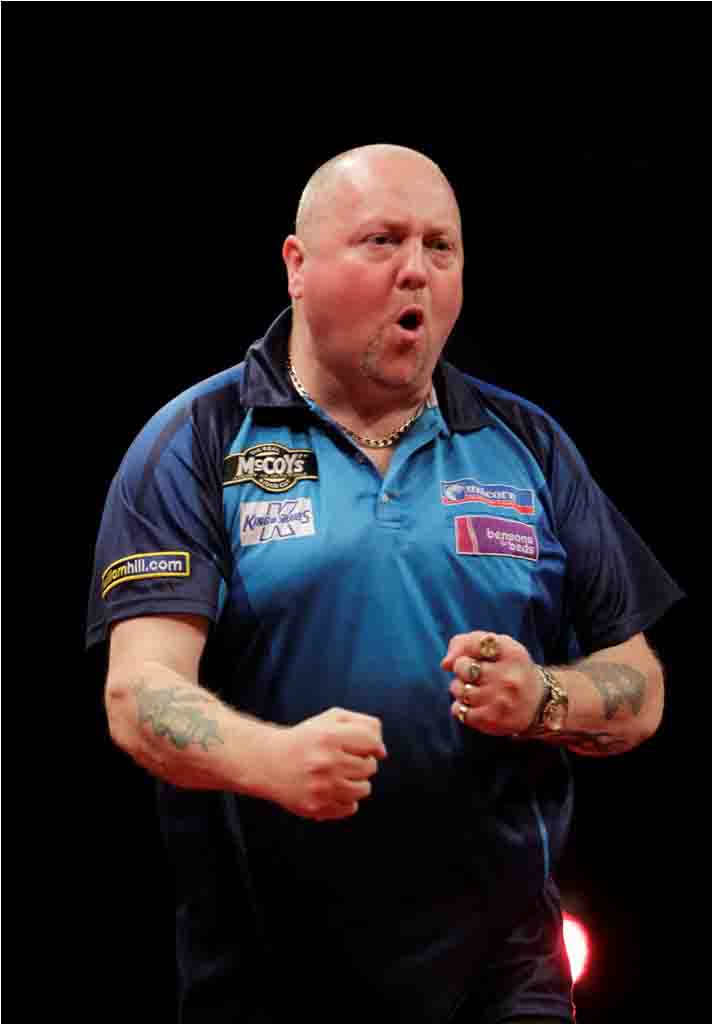 Raymond van Barneveld battled back from 4-1 down to grab a draw with Andy Hamilton as the pair shared the points in a McCoy's Premier League Darts thriller at the Echo Arena in Liverpool.
Hamilton continued his battle for a Play-Off place in his first Premier League season by taking a 3-0 lead against the Dutchman, and he also led 4-1 before van Barneveld hit back to share the spoils.

World Championship runner-up Hamilton made a fine start to the game, hitting double 18 to win the opening leg and a brilliant 152 checkout to break throw in the second. He then punished a missed bullseye from van Barneveld in the third by hitting the same bed to complete a 93 combination and move 3-0 up. Van Barneveld landed double ten to get off the mark in the fourth, before Hamilton finished tops to take a 4-1 cushion, only for the Dutch ace to battle back into the contest. He first finished 76 before breaking throw following three missed doubles from Hamilton by finishing double 16, and 14-darter then saw him win a third successive leg in squaring the match.
Hamilton landed double ten to end that run before van Barneveld posted his only 180 of the game and double eight to level again. The next two were also shared, with Hamilton taking out a 13-darter before van Barneveld finished a pressure 82 on tops to level at six-all. The Dutchman posted three 140s to be first to a finish in the penultimate leg, only to miss two darts at double 12 to take out 81 as Hamilton landed double 16 for a 14-darter. However, the English ace could not take the final leg for victory, with three more 140s giving van Barneveld the edge before he took out tops to share the points.

The draw was Hamilton's third successive stalemate, and he admitted: "It's good to get a point but I'm not getting the wins I want. We all want to be in the top four but we also want to put in a good performance and I'm still not out of it, I'll still be fighting at the end."

Gary Anderson battled from 6-3 down to grab a draw with Adrian Lewis as the reigning McCoy's Premier League Darts champion kept alive his slim hopes of reaching the Play-Offs next month.
Anderson entered the season's 12th league night bottom of the table and had to avoid defeat to retain any chance of finishing in the top four.
Having led 2-0 early on he would trail 6-3 as Lewis, inspired by a 170 checkout, pulled away, but the Scot produced arguably his best darts of the campaign to battle back and grab a draw.
He is still the rank outsider to reach the Play-Offs next month, and would need to defeat both Raymond van Barneveld and Phil Taylor as well as hope for all of his rivals to lose their games if he was to sneak into the top four.

"It's been a struggle this season but it was nice to feel right again on stage because it's been a while since I've felt like this," said Anderson. "It's unlikely that I'll qualify for the Play-Offs but I just want to finish the season strongly now. I'm not hitting the 180s still and I missed too many doubles but in patches my game was good tonight and it's something to build on."

Anderson had started the stronger, punishing misses from Lewis in the opening two legs to hit double six and double top to lead 2-0, only for Lewis to fire in a 14-darter in leg three to get off the mark. The World Champion showed his class with a 12-darter to level the match, winning the leg with a superb 170, the first of this season's Premier League which proved doubly dramatic after he hit two treble 20s but dropped his third dart, before casually landing the bullseye.
Lewis would miss the bull in the fifth leg as Anderson broke on double ten, but the Stoke ace took command with a run of four successive legs, hitting 180s in legs of 12 and 13 darts before finishing 118 and then double five to lead 6-3. Anderson hit his first 180 of the match - and only his second in four games - in stopping Lewis' run in the tenth leg, and added another maximum in a 12-darter to win the 11th and pull back to 6-5 with an 88 finish. Lewis kicked off the 12th with back-to-back maximums, and although he missed the treble 19 for a possible nine-darter he returned to hit double eight for an 11-darter to ensure he would take at least a point. Anderson then finished double ten to force a deciding leg, and traded maximums with Lewis as well as posting two 140s to set up an 11-darter of his own as he took the draw on tops.

"I thought it was a great game," said Lewis. "Gary had nothing to lose and he hit some great shots under pressure. He was fantastic and he came back fighting tonight. It was the Gary Anderson we know and I wouldn't be surprised to see him finish off the bottom of the table. His performance showed how tough the Premier League is, and I've got to perform now in the last two weeks to make sure that I make the Play-Offs."