Phil Taylor suffered his first defeat of the McCoy's Premier League Darts season as World Champion Adrian Lewis came from 4-1 down to win 8-5 in their clash at the BIC in Bournemouth.
Lewis had been the only player to pick up a point against the 15-time World Champion this season following the pair's draw in Manchester on the opening night, and ended Taylor's nine-game winning run in style.
The youngster trailed 4-1 at one stage but clawed his way back level before producing a killer 160 checkout as he won the last four legs without reply.

The victory took Lewis up to fourth in the Premier League Darts table above Raymond van Barneveld, after the Dutchman suffered an 8-5 loss to Simon Whitlock.

Whitlock now sets second on 14 points, three clear of Lewis and James Wade, in the race to claim places in May's Play-Offs at The O2 in London after picking up his third successive win, which included key finishes of 116 and 155 in successive legs.

Wade, meanwhile, had to settle for a draw in his clash with Andy Hamilton, who remains in contention for a Play-Off spot in his first Premier League season after being joined on eight points by Kevin Painter.

Painter moved off the foot of the table as he ended a five-game losing run with an 8-4 win over reigning champion Gary Anderson, who now sits bottom following the defeat as his hopes of defending his title at The O2 next month were further dented. 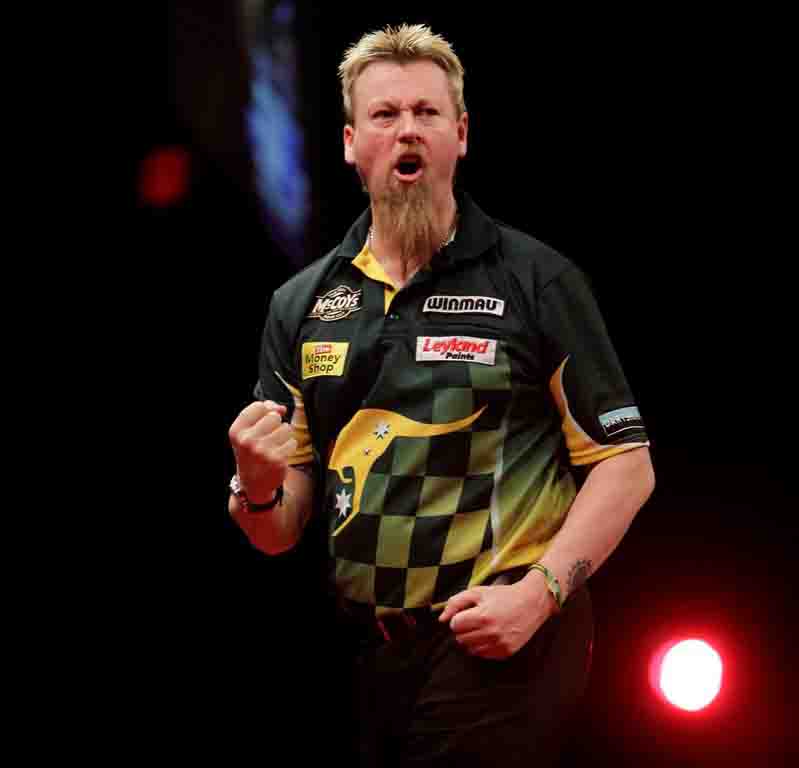 Simon Whitlock put one foot into the McCoy's Premier League Darts Play-Offs with a fine 8-4 win over Raymond van Barneveld at the BIC in Bournemouth, as the Australian moved onto 14 points in the league table.
Whitlock's sixth victory of the Premier League season means that he sits four points clear of the Dutchman - who opened the night in fourth place - going into the final three weeks of the regular season.
His triumph also dents van Barneveld's hopes of claiming a semi-final place, as the Dutchman failed to recapture the form which saw him win both UK Open Qualifiers held last weekend.

Although van Barneveld took the first leg - landing double 12 following a miss from Whitlock - it was the Australian who took the next five. After hitting finishes of double ten and tops, Whitlock produced killer checkouts of 116 and 155 to lead 4-1 - with both coming as van Barneveld waited on a finish - before he punished a missed tops from the Dutch ace to land double four in winning a fifth leg. Van Barneveld took out tops to hit back in leg seven, but missed two darts at double 18 in the next as Whitlock moved 6-2 up.
Van Barneveld hit 180s in the next two as he reduced the gap to 6-4, taking out 72 and then punishing misses from Whitlock in two visits to win the tenth on double two. However, the Australian hit a 180 and an 82 finish to win his seventh leg of the game before sealing the victory with a 14-darter.

"The way Raymond has been playing, and with what he did at the weekend, I probably wasn't expected to win that match but I pulled out a couple of nice finishes which turned the match in my favour," said Whitlock. "The 155 was lovely, as was the 116, and they changed the match."
He added: "I'm not satisfied with being on 14 points, I want at least another two or four points to make sure I'm in the Play-Offs."

Van Barneveld - who wore a new shirt designed in the traditional colours of his home town, Den Haag - admitted: "I had a lot of chances and they didn't go in, it wasn't my night and Simon played well and hit some crucial finishes, the 155 and 116 in particular. I had a great weekend in Barnsley but it cost me a lot of energy and I was very tired and didn't play my game. Simon let me in a couple of times but they didn't go in. It's not changed much in the league table. Even if I'd won tonight I had to win next week and the following week [to make the Play-Offs]."

Kevin Painter sent reigning McCoy's Premier League Darts champion Gary Anderson to the bottom of the league table as he ended a five-game losing run at the BIC in Bournemouth.
Painter had dropped to the foot of the ladder with five straight losses, but jumped above Anderson to keep alive his own hopes of reaching the Play-Offs at The O2 next month.
Anderson never recovered from a slow start as Painter took leads of 3-0 and 5-1 before holding off the Scot's fightback to claim a Premier League double over the current champion.

Painter took an immediate break of throw in the opening leg following two missed doubles from Anderson and doubled his lead before winning the third with a superb 11-darter, which included a 180 and double 16. Anderson took out 61 on double 18 to get off the mark in the fourth, but Painter finished a key 101 to win the next before landing double eight for a 5-1 cushion.
Painter also returned from the break with a 180 as he left 81 after nine darts in the seventh leg, but Anderson took out a brilliant 140 finish for a 12-darter to win his second leg of the game. The pair traded double top finishes in the next two legs before double 16 from Painter ensured that he would take at least a point from the game. Anderson pulled back to 7-4 by landing double eight, but his hopes of a comeback were dashed as Painter landed a 180 in the next to pull clear before sealing victory on double one.

"A first win in six games probably sounds quite bad but I feel that I've been playing well recently but I've had players like Barney, Phil and Simon put big averages into me," said Painter. "I'm on eight points and the Play-Offs are still a possibility for me. I might still finish bottom but I'll keep fighting and it's great to be involved in the Premier League and I've enjoyed every week. I thought I played alright tonight. My finishing was in and out at times and I thought I was going to lose my way a little bit halfway through but I nicked a 101 finish when Gary was coming back into it and it changed the game."

Andy Hamilton battled to a second successive McCoy's Premier League Darts draw as he denied former champion James Wade a vital victory in their clash at the BIC in Bournemouth.
Wade, the 2009 Premier League winner, took a further step towards a place in this year's Play-Offs by securing a point from a tight battle, but was left frustrated as Hamilton took a draw in the deciding leg of the contest.

There was never more than one leg between the pair throughout the game, with Hamilton breaking throw in the opening leg despite a 180 from Wade, who landed another maximum in hitting back to level. The remaining 12 legs would all go with the throw, although both players had chances to break at times without landing the key double. Hamilton was punished for a missed double 16 in leg three as Wade took out 58 on tops, before the Stoke ace finished an improvised 40 with a double one, double 19 combination to level.
Wade took out double 12 to win the fifth before Hamilton replied with a 13-darter, only to miss double eight for a 136 checkout in leg seven to allow the left-hander to finish 86 in two darts. Hamilton also missed double eight for a 136 finish in the next, but returned to hit double four and level at four-all. The next three legs were all won with ton-plus finishes, as Wade took out 116 and 124 and Hamilton checked out 123 on double nine. Hamilton also missed the bull for a 164 finish in the 12th leg, but returned to land double 16 to ensure the final two legs would be decisive. Wade hit a 180 and tops to take the 13th for a 7-6 lead as he ensured a point, and a 180 left 61 in the decider - but Hamilton was first to a double and landed tops with his third dart for a point.

"I think I played well but a draw was a fair result," said Hamilton. "I've battled for points all the way through the season and I never gave in again. I could have broken James a couple of times and you pay for mistakes like that, so I'm happy to have taken a draw. It's another point and I'm still fighting - I'm putting points on the board and I'll give it my best again next week against Barney." 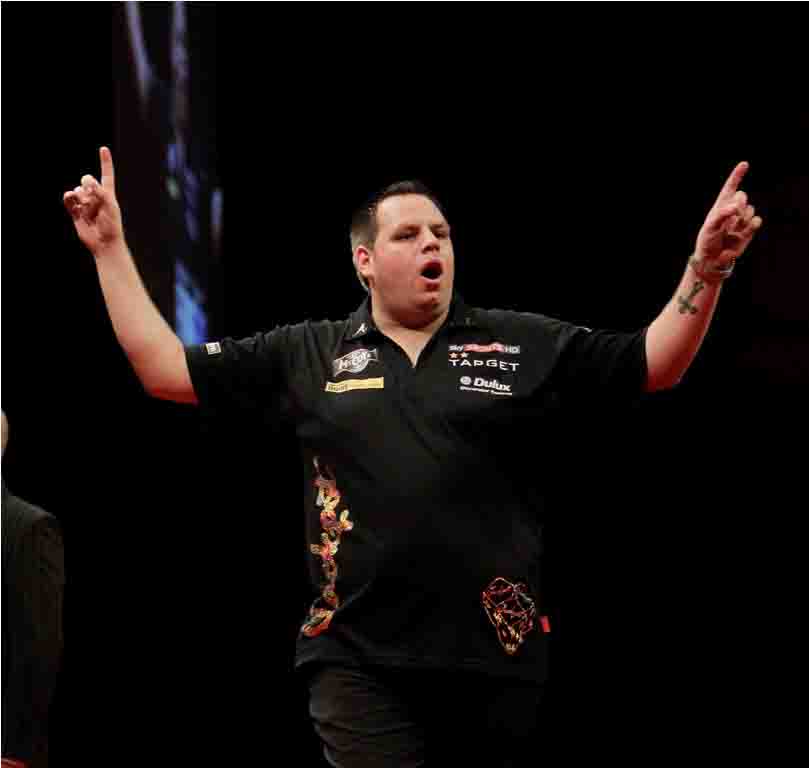 Phil Taylor suffered his first defeat of the McCoy's Premier League Darts season as World Champion Adrian Lewis came from 4-1 down to win 8-5 in their clash at the BIC in Bournemouth.
Lewis had been the only player to pick up a point against the 15-time World Champion this season following the pair's draw in Manchester on the opening night, and ended Taylor's nine-game winning run in style.
The youngster trailed 4-1 at one stage but clawed his way back level before producing a killer 160 checkout as he won the last four legs without reply.

Taylor dominated the game's early stages, winning the opening leg on tops and hitting a 180 in the second, which Lewis took in 13 darts. Taylor then matched that to win the third before landing another maximum in leg four, capitalising on a miss at tops from Lewis on a 98 finish to hit double eight before repeating the feat in the next to leg 4-1.
Taylor could also have won the sixth leg, but missed double 18 for a 116 checkout as Lewis finished double six to hit back before he landed double 12 and double two to pounce on further misses from the world number one. Taylor landed a 180 and finished tops to lead 5-4 with a 13-darter, but was left reeling by a superb finale from Lewis. The World Champion showed his class, firstly by levelling in 13 darts after hitting his second 180 of the match before winning a key 11th leg, with Taylor posting a 180 to leave 60 only to see Lewis power in a 160 checkout to lead for the first time. He then took out 72 in two darts with Taylor waiting on 32, and left his former practice partner sat on the same score in the next as he sealed a precious triumph on double 18. 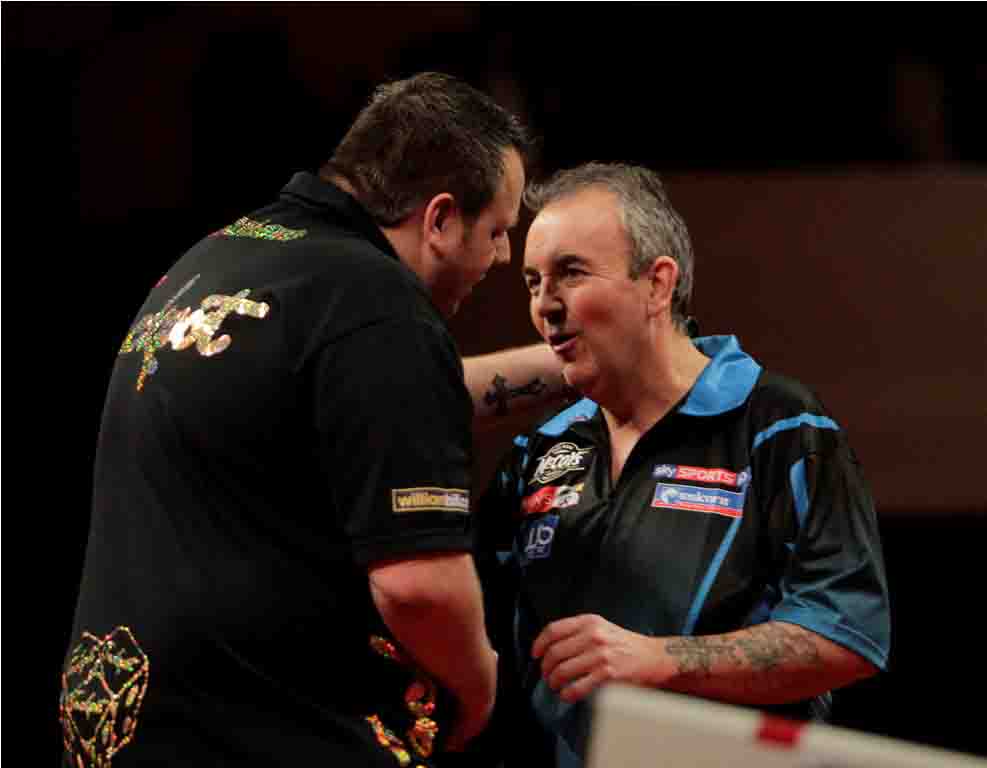 "I missed a couple of doubles early on in the match and at 4-2 down I could have been level if I'd taken my chances," said Lewis. "I came out firing after the break and finished really well. If the 160 didn't go in I probably would have lost the game, but massive shots like that change games. I think the 160 was a key shot in the match and I don't think Phil recovered from that, I put the pressure on him and I believed in my own ability. Phil's the best player in the world but you've got to forget what he's won, go up there and try your best. I showed I've got a lot of bottle and that's what wins me matches. I'm not in the Play-Offs yet though, and I've got to treat every game like a final now, starting with Gary Anderson in Liverpool next week."