Phil Taylor produced another super-show to remain unbeaten in the McCoy's Premier League Darts with an 8-3 defeat of Raymond van Barneveld in Sheffield on Thursday, while reigning champion Gary Anderson's hopes of retaining the title took a blow when he took only one point from his two matches. Taylor continued his charge towards the Play-Offs with a ninth successive victory this season, as he also maintained his record of never having been beaten by his Dutch rival in the Premier League.
Van Barneveld did cause Taylor some nervous moments, but crucially missed eight darts to level the game in the eighth leg before the world number one took four straight legs to seal the win. Van Barneveld now sits fourth in the league table behind Simon Whitlock and James Wade, who both picked up victories as the Premier League visited Sheffield's Motorpoint Arena.

Whitlock came from 2-0 and 3-2 down to defeat Kevin Painter 8-5 and win his second successive game with a ton-plus average, while Wade saw off Gary Anderson 8-3. Anderson competed twice on the night, having missed the recent league night in Cardiff to attend his father's funeral in Scotland, and took a point from his second game, against Andy Hamilton. Reigning champion Anderson missed three darts to take victory as Hamilton hit back from 7-4 down to force a deciding leg, and the World Championship finalist then took out 102 to snatch a draw.

The results mean that Kevin Painter is now bottom of the table on six points, one behind Anderson and Hamilton, with World Champion Adrian Lewis on nine points - one short of the Play-Off positions - ahead of his return to action next Thursday when he faces Taylor in Bournemouth. McCoy's Premier League Darts 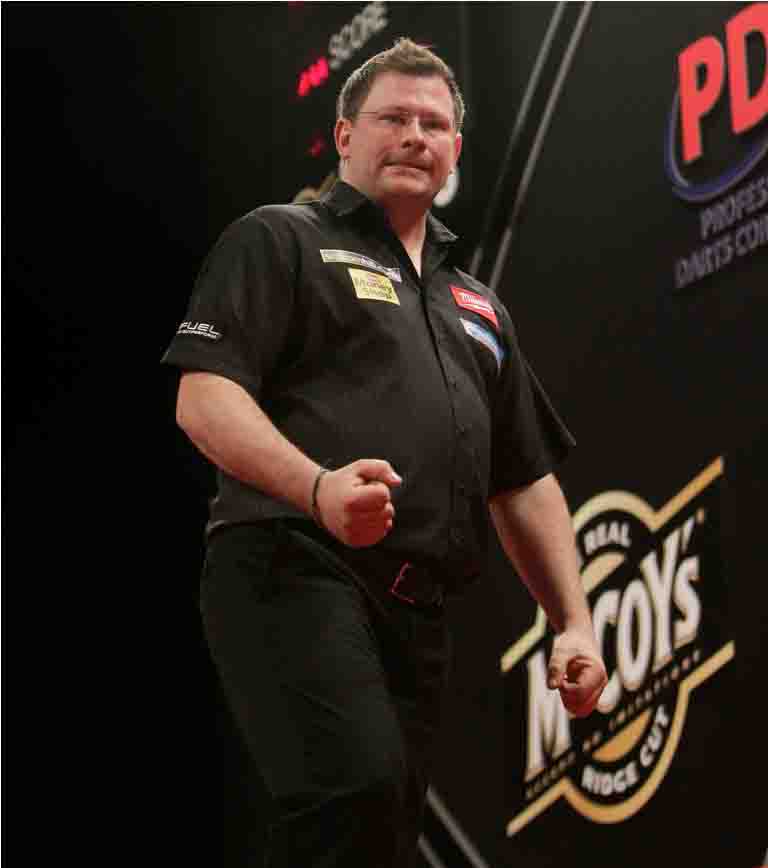 James Wade won his fifth game of the McCoy's Premier League Darts season with a polished display to see off reigning champion Gary Anderson 8-3 at the Motorpoint Arena in Sheffield.
The 2009 Premier League champion produced the kind of performance which took him to the title three years ago, averaging over 101 and finishing eight out of 15 attempts at a double.
The first two legs were shared as Wade landed tops before missing the bull for a 170 finish in the second, allowing Anderson to finish 96 on double 19. Wade then took out legs of 13 and 12 darts - to break - in moving 3-1 up before Anderson took out 64 to break.
The Scot, though, failed to prevent Wade winning the next four as the left-hander swept into a 7-2 lead to secure a point, breaking throw twice with finishes of 70 and 76 in the process. Anderson took the tenth leg to keep his hopes alive, but when he missed double 14 for a 121 finish and three further darts at the bed he was made to pay as Wade took out tops to seal the win.

"I enjoyed that game and I'm happy that the result went my way," said Wade, who finished 53 percent of his chances at a double. "My finishing four or five years ago was really good and of late it hasn't been as good as it can be. I'm not the greatest scorer in the world so my finishing needs to be good for me to win games, and it was tonight. Everyone apart from Phil's really close in the table and anything could happen and anyone could qualify in the next three weeks. I don't think there's a year where everyone's been so close and it's exciting." Leg-By-Leg

Simon Whitlock continued his McCoy's Premier League Darts resurgence with a high-quality 8-5 win over Kevin Painter at the Motorpoint Arena in Sheffield.
Whitlock had been whitewashed by James Wade a fortnight ago but hit a second successive ton-plus average as he followed up last week's win over reigning champion Gary Anderson with another fine display.
Painter actually led 2-0 and 3-2 before Whitlock took four successive legs in mid-game before going on to take his fifth victory of the season.

Painter made an ideal start, hitting a 180 in the opening leg and finishing double eight to break immediately, before finishing 71 on tops to confidently double his lead. Whitlock, though, hit back on tops before landing a 180 in a second successive 14-darter as he levelled the game. He also missed tops to steal the fifth as Painter broke again by following an earlier 180 with double ten, but Whitlock kick-started his challenge in style with a maximum and double six to level in the next.
The Australian then produced an 13-darter to take the lead, with the aid of a third maximum of the game, before finishing 66 to break and double eight to lead 6-3. Painter won the next by hitting a 180 and a 119 finish before Whitlock posted his seventh leg with an 11-darter to ensure he would take at least a point. Painter continued to fight as he hit another 180 and tops to take his fifth leg, but he paid for missing double 13 to keep the comeback alive as Whitlock stepped in to post double ten for the win.

"Kevin's a fighter and he got a good win over me last time we met so to get one over on him is fantastic for me," said Whitlock. "I don't think I'm in the Play-Offs after that win - I think I need 15 points at least - but it's another step towards it. I had one really bad week when I had that horrific 8-0 loss to James Wade but I've bounced back well, and I'm showing how good I am at the moment." 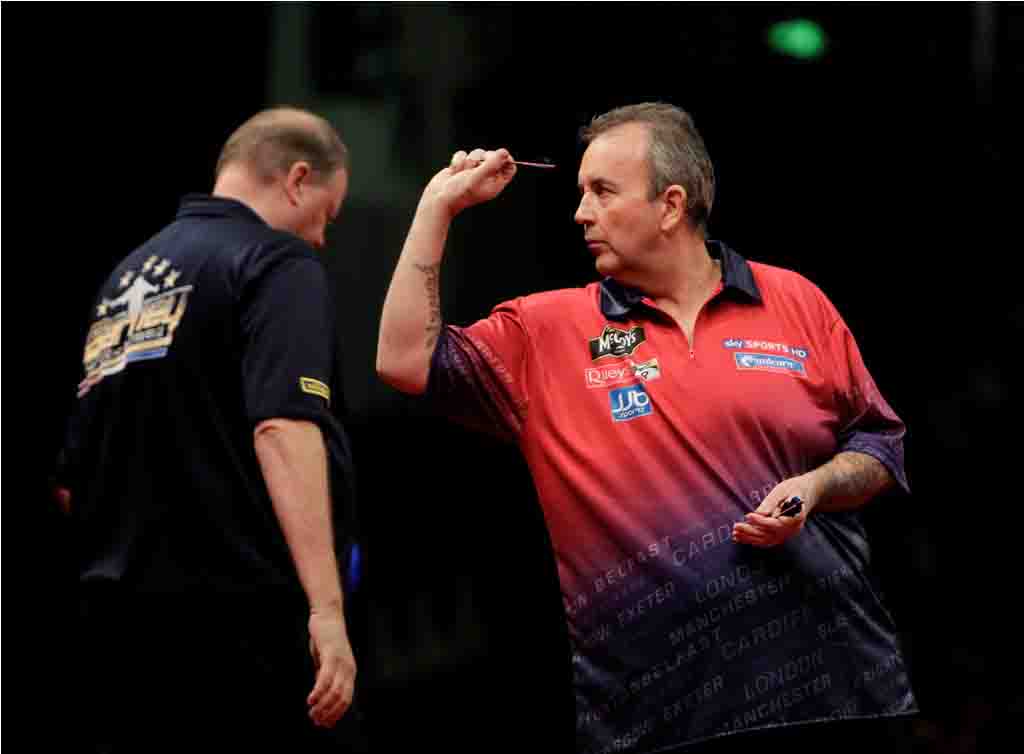 Phil Taylor powered to a McCoy's Premier League Darts double over Raymond van Barneveld with an 8-3 victory over the Dutchman at the Motorpoint Arena in Sheffield on Thursday.
Taylor continued his unbeaten Premier League season with a ninth straight victory as he bids to regain the £150,000 title.
Van Barneveld held his own for the first half of the game, but when trailing 4-3 he crucially missed eight darts to level as Taylor stepped in to take that leg and the next three for victory.

"There was a lot of pressure on Raymond and you can feel that with all the players because they're fighting for Play-Off places," said Taylor. "The eighth leg was crucial and if he'd hit that double it would have been a tense final few legs, but he missed and I made him pay." 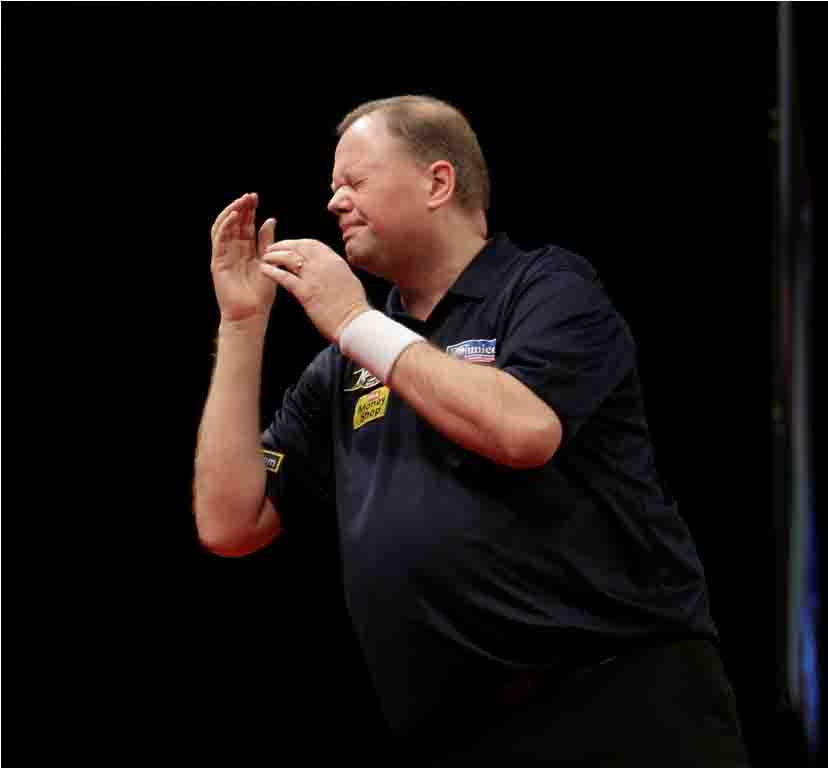 Van Barneveld began brightly, hitting two 140s to give himself a chance of breaking throw in the opening leg, only to miss the bull for a 161 checkout before Taylor finished 100 in two darts to open with a 14-darter. He then broke throw with a 13-dart finish and took out double 16 to move 3-0 up before van Barneveld got himself off the mark in 12 darts, hitting three 140s and an 81 finish. The pair traded 180s in the fourth before Taylor took out 124 superbly on double 11 to move 4-1 up, only for van Barneveld to hit back with finishes of 82 and 76 to reduce the gap to one leg.
The Dutchman also hit a 180 in the eighth leg as he was first to a finish, but he agonisingly missed eight darts to level the game as he went around the board on double 16, eight, four and two. Taylor stepped in to hit double ten and never looked back, finishing 74 and 68 in the next two legs to move 7-3 up before posting a two-dart 85 checkout to secure the win with another 14-dart leg.

Van Barneveld said: "In the first leg I missed the 161 and that was crucial, because if I'd hit the bullseye then I could have dictated the game but he went 3-0 up. "I had a great opportunity in the eighth leg too and if I'd hit that then I might have gone on to get a few more legs, but it's so hard to beat Phil and he doesn't seem to miss. I'm doing my best and it hurts to lose but I want to get into the top four and I'll move on to get ready for next week's game now. I was comfortable and relaxed on stage but Phil was too good tonight."

Andy Hamilton took out 102 to snatch a dramatic draw with Gary Anderson and leave the reigning McCoy's Premier League Darts champion's hopes of retaining the title fading at the Motorpoint Arena.
Anderson entered a crucial night in Sheffield facing two matches, but although he bounced back from his earlier loss to James Wade by moving 7-4 up against Hamilton to ensure at least a point, he paid the price for failing to finish off the plucky Stoke ace.
Hamilton twice punished missed doubles in hitting back to force a deciding leg, and with Anderson waiting on 44 he held his nerve to take out 102 and grab a point.
The draw sees both move off the foot of the Premier League table as they edge away from Kevin Painter, but they also sit three points adrift of the Play-Off places with four league nights remaining.

Anderson opened the game strongly, breaking throw with a 14-darter in the first leg before taking out 101 to double his advantage. Hamilton, though, responded superbly to take the next four legs, finishing 72 to get off the mark and a 124 checkout to leevel the game before posting two 180s in a 12-darter to lead 3-2. He also punished three missed doubles from Anderson to win the sixth and take a 4-2 lead at the break, only for the momentum to swing as the Scot showed the form which took him to last year's title.
Anderson reeled off five successive legs to move 7-4 up, breaking throw three times, hitting a 121 checkout for a 12-dart leg and a brace of 13-darters in the process as he ensured he would take at least a point. Hamilton capitalised on a missed double 12 for victory from Anderson to follow up a 180 by hitting double five in leg 12, and after two misses at tops from the Scot he landed double 18 to force a deciding leg. Anderson, with the throw, left himself 44 after 15 darts but could only watch as Hamilton took out 102 with a treble 20, single ten and double 16 combination to snatch a draw.

"I'll take one point from the night because that's better than nothing," said Anderson. "I threw it away a bit at the end against Andy but he dug in there like he always does. I had my shots in the last two legs to win the match and I've nobody to blame but myself. I've got four weeks left to try get into the Play-Offs and I know what I've got to do - start winning!"

Hamilton said: "I made hard work out of it but at least I took a point out of the game. "I was in control at 4-2 up but I relaxed in the middle of the game. Gary started hitting big scores and after being 7-4 down it's a great result and I think a draw was fair in the end. I want to get into the top four and I'll be trying my hardest to get there. I'm still fighting and I'm only a couple of wins away from the top four."