Adrian Lewis and Phil Taylor kicked off the McCoy's Premier League Darts season with a thrilling draw at the Manchester Arena on Thursday night, as Andy Hamilton and Kevin Painter made winning debuts in the tournament.

The opening night of the 2012 Premier League season featured one of the greatest ever games in the tournament's history as Taylor came from 6-1 down to snatch a point. Lewis had been superb in taking a 5-0 lead without missing a double - or allowing Taylor a dart at one - but the world number one produced a thrilling second half of the game.

Earlier in the night, debutants Hamilton and Painter defeated 2009 winner James Wade and reigning champion Gary Anderson respectively to make ideal starts to their first season. Hamilton was an 8-5 winner against Wade, who hit finishes of 121 and 126 on the bullseye in taking a 4-3 lead before the World Championship finalist won five of the next six to take both points.
Painter, meanwhile, enjoyed a dream debut against Anderson, hitting a 180 with his first three darts in the tournament and winning the opening five legs without reply. Anderson showed glimpses of the class which took him to the title last May by hitting back to level at six-all, but Painter hit a crucial 128 checkout to win the 13th leg before posting

The night's other game featured another high-quality draw, as Simon Whitlock and Raymond van Barneveld shared the points from their season opener. Van Barneveld made a confident start to lead 4-2 before Whitlock took a 7-5 advantage, but he would never be given the chance to throw for the match as the Dutchman finished 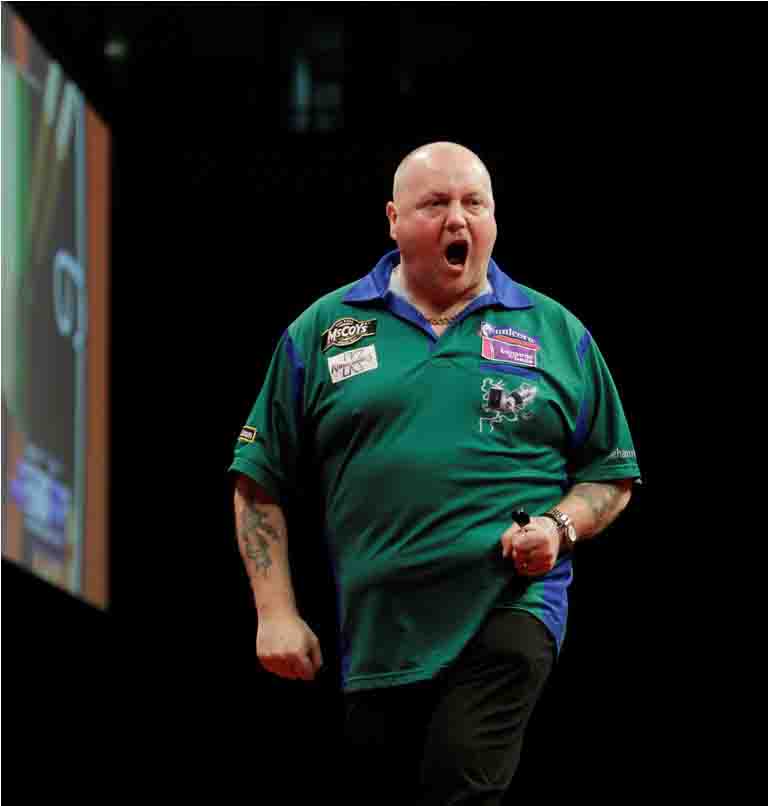 Andy Hamilton made a brilliant debut in the McCoy's Premier League Darts with an 8-5 win over former champion James Wade at the Manchester Arena.
Hamilton continued the form which took him to the World Championship final just over a month ago with a brilliant performance, hitting five 180s and over half of his chances at a double.
The game turned in a brilliant four-leg run from Hamilton in the middle of the match as he moved from 4-3 down to lead 7-4 before going on to close out victory.

The early legs were cagey as the pair shared the first six to be tied three-all at the break, with Wade superbly taking out both 121 and 126 on the bullseye. The left-hander returned from the break to break for the first time with a 14-darter as he followed up a 180 with a 61 finish.
Hamilton, though, hit straight back to break in 13 darts, tok out 77 and 93 to move into the lead and traded 180s with Wade before punishing a missed double top from the world number three to finish double eight and take a 7-4 cushion. Wade finished 41 on tops to take the next, but Hamilton landed his fifth 180 of the night and took out double top to secure two points on his first Premier League outing.

"I loved every minute of it," said Hamilton. "This is what I play darts for and it's like playing a World Championship final every week. "To beat James is a great achievement for me because he's a top-class player, and I hope I can push on from here now and do the same to the other players. I'm excited and enjoying the Premier League so far, and I can't wait for the next 14 weeks. I'm not getting carried away but it's a very good start for me."

Raymond van Barneveld hit back from 7-5 down to snatch a draw with Simon Whitlock in their McCoy's Premier League Darts opener at the Manchester Arena.
Australian star Whitlock looked set to claim both points when he won five legs out of six in the middle of an enthralling contest, but was denied the chance to seal victory as the Dutchman took the last two legs to share the spoils.

"Raymond played some fantastic darts and I'm happy to get away with a draw there," said Whitlock. "When I was 4-2 down I'd have taken a draw, but when I was 7-5 up I started thinking about the win and Raymond came up with some massive darts in the last two legs. I'm really happy with my darts at the moment and it's a good start to the season. I think it's going to be a very close McCoy's Premier League."

Although Whitlock started well, finishing 82 on tops for a 15-darter, before van Barneveld took the next three to move 3-1 up in kicking off with an average well over 100. Whitlock finished 96 on double nine to take the fifth before van Barneveld produced a sparkling 12-darter which featured a 180 and an 81 checkout to lead 4-2.
Whitlock returned from the break to hit double four and hit back, before hitting two 180s in a brilliant 12-dart leg to level, with even a maximum from van Barneveld unable to prevent the Australian breaking throw. He then took out 58 to lead for the first time since the opening leg, although van Barneveld landed a pressure double 12 to win the tenth and square the game.
A miss from van Barneveld on double 16 allowed Whitlock to follow an earlier 180 with double four to lead 6-5, and he secured at least a point in the next by taking out double 16 following two more misses from the Dutchman at the same bed. Van Barneveld kept the game alive brilliantly with another 12-darter, featuring a 180, before landing another maximum in the decider and hitting double eight for a 13-darter to grab a share of the points.

"I thought I'd lost the game at 7-5 down but I fought back well to get the draw," said van Barneveld, who has started 2012 in strong form since his first round loss to James Richardson at the World Championship. I was devastated after the World Championship but since the start of January I've been working hard and I'm playing well. I'm feeling great and I was comfortable on stage. At 4-2 up I was over the moon during the break, and if I'd held my throw I'd have won but Simon showed what a class player he is." 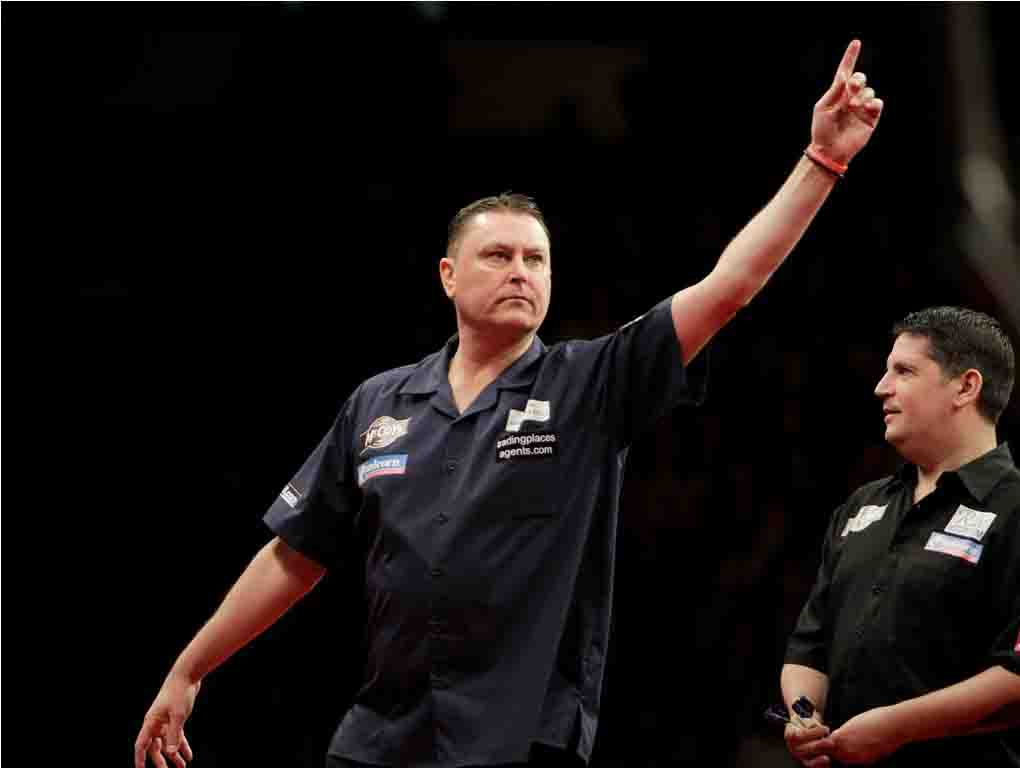 Kevin Painter held off reigning champion Gary Anderson's fightback from 5-0 down to take an 8-6 victory on his McCoy's Premier League Darts debut at the Manchester Arena.
December's Players Championship winner Painter enjoyed a dream start to his career in the Premier League, hitting a 180 with his first three darts and taking out finishes of 134 and 114 in moving five legs clear.
Anderson would win six of the next seven to level the contest, but was denied the chance to complete a remarkable comeback when Painter won the game's final two legs to take the win.

"I've had a win and I can't ask for any more from that from my first game," said Painter. "My first two legs and last two legs were probably my best, and I had three ton-plus finishes in there to nick legs from Gary."

After kicking off his first Premier League Darts game with a 180, Painter went on to win the first leg with a 74 two-dart checkout. He then broke on double eight to lead 2-0, and after finishing double ten to win the third leg he then broke with a superb 134 checkout after Anderson misses two darts at tops to get off the mark. The Scot finally won a leg in the sixth, missing eight darts at a double before finally pinning double one to get off the mark.
Anderson finished 56 and 40 to win the next two legs in pulling back to 5-3 before missing two darts to win the ninth, as Painter took out double 16 for his sixth leg of the game. Painter, though, missed a total of seven darts to win the next two legs as Anderson finished double two and double one to pull back to 6-5, before levelling on double two.
Painter responded in style by kicking off the 13th with his second maximum of the game, and he won the leg with a superb 128 checkout to ensure at least a draw. However, he pulled away in the decider to be first to a finish before landing double 16 for a maiden Premier League win.

"It was a strange game but all that matters is that I got the win," said Painter. "I raced into a 5-0 lead but it didn't feel like I was that far ahead, and I probably relaxed a little bit when I shouldn't have a let him back into it. The evening went very quickly and I'm just happy to get the two points against a player of Gary's quality." 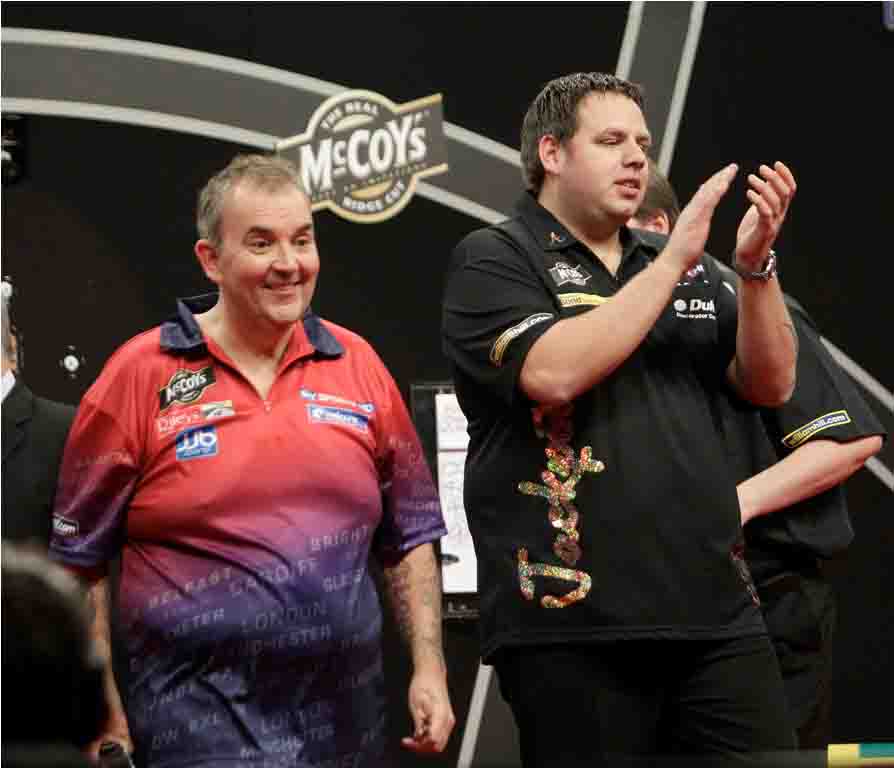 Phil Taylor produced a stunning comeback to grab a draw with World Champion Adrian Lewis in a sensational McCoy's Premier League Darts opener at the Manchester Arena.
The pair produced arguably the highest-quality game in the tournament's history as they brought over 8,000 fans to their feet with a thrilling contest.
Lewis made all the early running, winning the opening five legs without missing a double - and also without allowing Taylor a shot at one - before moving 6-1 up.
Taylor then won five successive legs, hitting six 180s and three 11-dart finishes, to level the contest, before the pair shared the final two to earn a point each from their opener.

"It was a great game," said Taylor whose end average of 112.79 was the second-highest in Premier League history.. "Adrian was brilliant under pressure and it was a fantastic advert for the sport. Early on I was scoring well but not getting chances because his finishing was superb. I started scoring a bit heavier and took my doubles out, and when I got back to six-each he held his nerve. This result shows that everything I'm doing, with my preparation and practice, is doing me good."

Lewis opened the game with a 14-dart finish before doubling his lead with a barnstorming 138 checkout on double nine to break Taylor's throw. Taylor was then left waiting on 40 in the next three legs as Lewis produced a 73 finish and back-to-back 13-dart legs to show the quality of a World Champion. Taylor finished 54 for a 12-darter to get off the mark in the sixth, before Lewis posted a 180 and double eight to lead 6-1 after his Stoke rival missed a dart at double 16.
Taylor, though, turned the game on its head with a sensational run of five legs, which began with a 13-darter which he finished on double four. He then took out double eight to win his third leg of the game, and landed a 180 for the third successive leg as he produced an 11-darter to reduce the gap to 6-4. That was bettered in scoring terms with two maximums in another 11-dart finish before he hit a seventh 180 of the game in a third successive 11-darter as he levelled the contest with an 86 checkout.
Taylor also had a dart to move ahead in the 13th, wiring the bullseye for a 130 finish, as Lewis held his nerve to hit double ten to secure at least a draw at 7-6. The pair then traded 180s in the deciding leg, but Taylor was first to a finish to land double 16 to complete a remarkable comeback, which saw him average 119 for the final eight legs.

"Phil's comeback was amazing and I couldn't have done much there against that," said Lewis. "For him to hit a 112 average against me and not win shows that I played well. It's one of the best games I've played in, and to share the stage with Phil for a game like that is a great honour."