Gary Anderson took the final three legs without reply to end his three-game losing run in the 888.com Premier League Darts with a narrow 8-6 victory over James Wade at the Motorpoint Arena in Cardiff on Thursday.
The Scot had slipped from top to third in the table with a treble of losses in recent weeks, but hit six 180s and a 101.54 average to defeat the 2009 champion.
Wade played his part in a fine struggle, hitting five maximums alongside a 141 finish, but paid the price for missing three darts to lead 6-4 as Anderson levelled and edged the final stages.

Anderson showed his scoring power with a 180 in the opening leg, but missed three darts for an immediate break before Wade finished 62 to get off the mark. Anderson posted double top to level, but after hitting a second 180 he missed double 12 for a 141 finish to break and Wade held throw with a 102 checkout. The Scot's power scoring saw him hit another 180 and a 94 checkout to level in the fourth, and he finally broke in the next, with both players posting maximums but Wade paying for missing four darts at a duoble as Anderson took out 72. Wade replied in style, finishing 141 to level going into the break, before the next two legs were shared on double top to leave the scores locked at four-all.
Wade took the ninth after Anderson missed darts at double top and ten to break, but and the left-hander hit a timely 180 to be first to a finish in the tenth. However, Wade was off-target with two darts at double ten and one at double five, and Anderson snatched the leg on double five. Wade won the next on tops, but Anderson found another gear to pull through for victory by taking the final three without reply.
Wade did land a 180 in the 12th leg, but Anderson hit double ten and then broke to lead 7-6 with a brilliant 11-darter, which included two maximums and a double top finish. Wade hit a 180, his fifth of the game, in the deciding leg, but Anderson denied him a chance to snatch the draw by landing double top for a 15-dart finish.

"It's a relief because I was panicking after three weeks without a win," said Anderson. "It was a scrappy game in some ways, despite us hitting 11 180s, and James didn't get going. "He has been struggling a bit and it was about who had enough on the night to get the win. James had a chance to go two legs up and he missed, I pinched it and did well in the last few legs, especially the 11-darter to go 7-6 up."

Simon Whitlock powered past Terry Jenkins with a fine 8-3 victory to continue his play-off challenge in the 888.com Premier League Darts.
The Australian made Jenkins pay for missed doubles in the middle of the game as he claimed his fourth win of the season, and second in succession to kick-start his bid for a top four finish.
Whitlock made a strong start, landing double ten for the first leg and a 100 finish in the second which featured two double tops, but Jenkins hit back in style to level.

The Ledbury ace hit two 180s in a 14-darter to break in leg three and hit another maximum and tops to level - only to be punished for missed doubles in the next two. Whitlock finished double eight and double two, with the latter breaking as he led 4-2 before hitting another double eight finish to move three legs clear.
Jenkins defied a maximum from the Australian to take out 74 in the eighth, but Whitlock hit a 180 in a 14-darter to move a leg away from the win. Whitlock missed the bull for a 170 finish - for the second time in the game - in the next as Jenkins hit double four to stay in the game, but the former World Championship finalist sealed the win in style in the next leg, hitting a 180 and finishing 122 on the bull for victory.

"I'm very pleased with that and the 122 was a good way to finish the game," said Whitlock. "I felt I had to hit it because Terry was right behind me. "I'm probably about 95 percent at the moment but it needs to improve if I'm going to win this. It's hard every week and if you don't win you're in trouble." 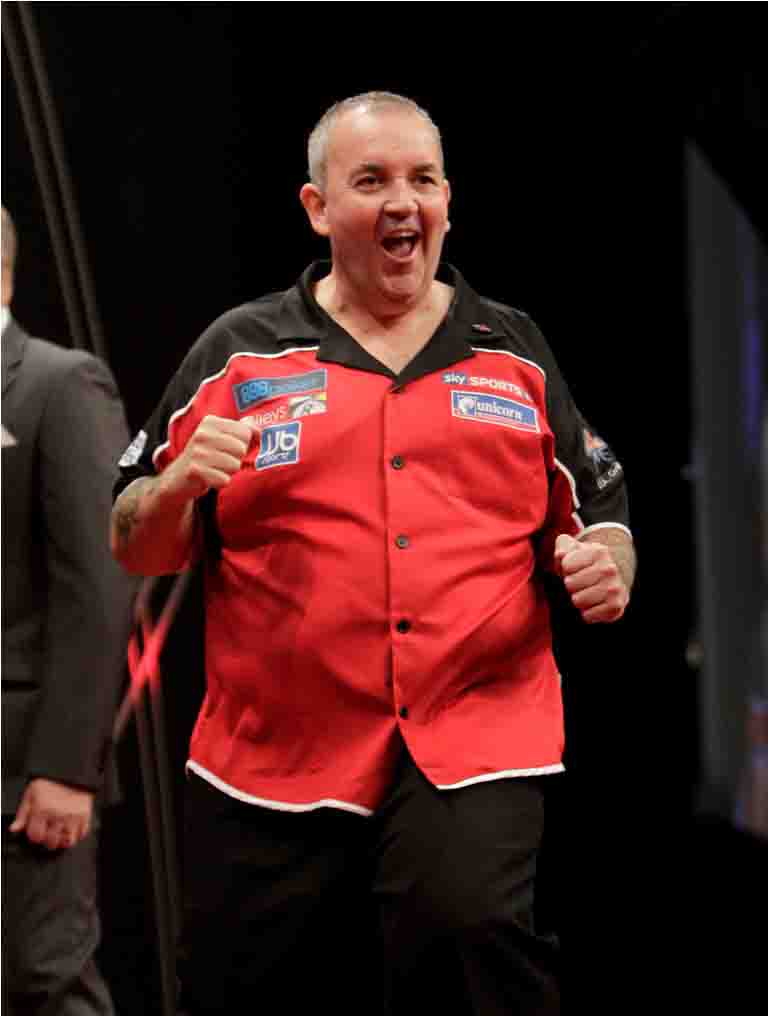 Phil Taylor quest for a sixth 888.com Premier League Darts title continued with a superb 8-3 victory against Raymond van Barneveld at Cardiff's Motorpoint Arena.
Taylor moved four points clear at the top of the league table with his seventh successive win, secured in style with a 104.52 average in Wales.
Van Barneveld matched Taylor throughout the opening exchanges, hitting seven perfect darts in one leg, but the game turned with a brilliant 128 bullseye finish from Taylor which put him 4-2 up at the break - and he won four of the next five to take the win.

Taylor landed double 14 to take the opening leg, before van Barneveld posted two 180s to open the second, adding a further treble 20 before missing the treble 19 in his bid for a third Premier League nine-darter. He returned to land double four for the leg, and also hit maximums in the next two, which were shared, before Taylor finished 66 on double 16 for the fifth to lead 3-2. Van Barneveld left himself 120 to square the match in the sixth, but Taylor followed an earlier maximum with a superb 128 to break throw and lead 4-2 at the interval. 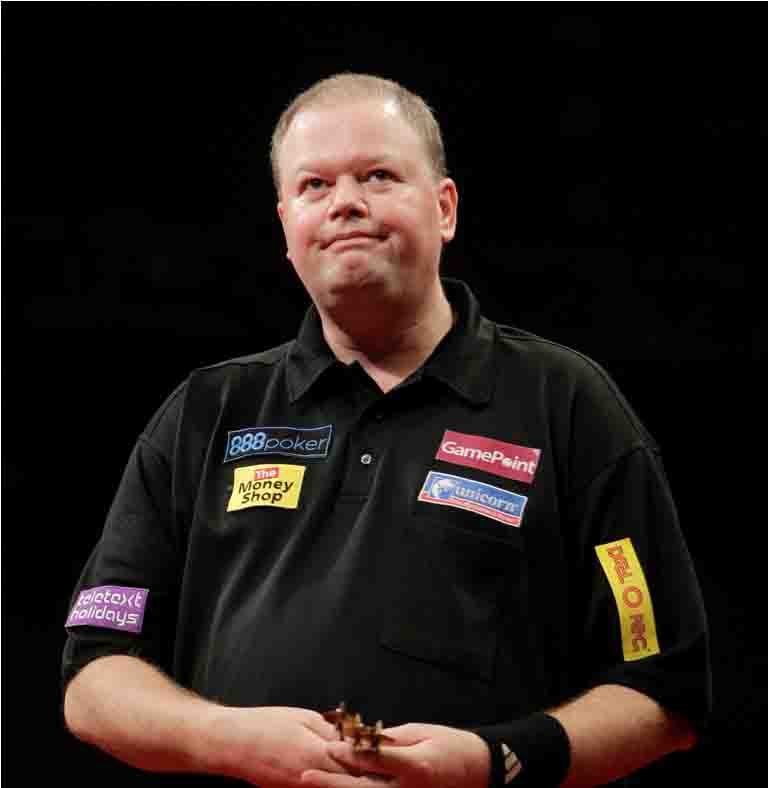 He returned to win the next two, twice on double top and once with double eight, to move 7-2 up, and also missed the bull for the match in leg ten. Van Barneveld showed his class with a 119 finish, but Taylor responded in typical fashion with a 180 to kick off the next before posting double four to complete the win.

"I'm getting closer to my best but I'm enjoying it and going on stage with a smile on my face," said Taylor. "You've got to relax and enjoy the game, even though there's a lot of pressure on you. "I thought Raymond would hit a nine-darter in the second and I wish it would have gone in for him. I thought Raymond dipped in the second half - he was thinking about keeping his own darts and didn't capitalise when I had a bad leg. "He's getting back to his best and I'm very pleased about that. I think I'm in his head a little bit and he's thinking too much about the game - he's got to get the gremlins out of his head."

Adrian Lewis wrecked Mark Webster's Welsh homecoming with an 8-1 victory over the left-hander as the 888.com Premier League Darts visited Cardiff's Motorpoint Arena on Thursday.
Webster had produced his best-ever televised display with a 110 average in defeating Lewis in Exeter a month ago - but suffered a fourth successive loss as his form slump continued.
Over 4,000 fans packed the Motorpoint Arena to welcome the Welsh ace, but he never recovered from a bad start as Lewis capitalised.

Lewis hit a 174 score to set up double 16 in taking the first leg, and stepped in when Webster missed six darts at double six in the second to break on double 14. Webster opened the third with a 177, but was left waiting on 20 when Lewis took out double ten to win the third, before a superb 128 finish for a 12-darter gave him a 4-0 lead.
A second successive 12-dart leg won Lewis a fifth leg, and when Webster missed double 15 for a 110 finish in the next Lewis followed up a 180 with double top to lead 6-0. He also posted double ten to take the seventh leg, although Webster denied him a whitewash in the next, hitting a 180 and a 62 finish in response to two maximums from the World Champion. Lewis, though, hit a timely 171 score in the next, and sealed the win in 13 darts on double 14. 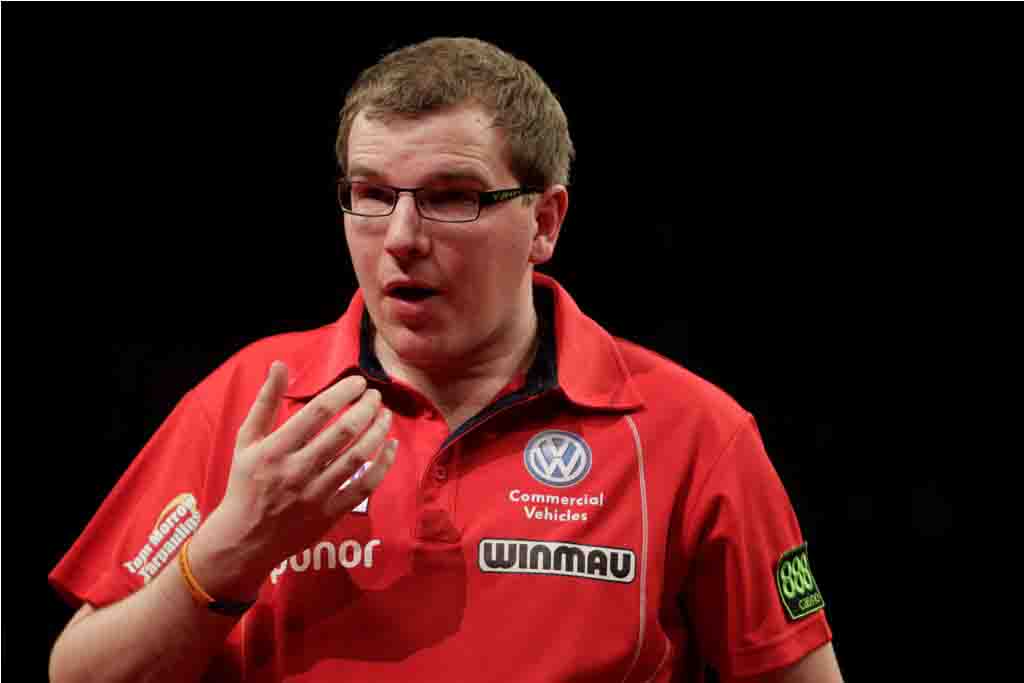 "It was tough for Mark," said Lewis. "He had all the Welsh crowd with him but maybe he was trying too hard, but it's his first Premier League and he'll become more experienced. "I've shown I can play Gary Anderson in Scotland and win and Mark Webster in Wales and win, and I'm ready for what people want to throw at me. "I looked at the draw after I lost to Mark in Exeter and targeted six or seven points from my next four games, and it's been four weeks now that I've not lost and that's brilliant for me."

Webster admitted: "I tried my best but it was nowhere near good enough. The reception was great and I apologise to all the people who came hoping to see me win. "Sometimes when it's not happening for you, you try harder and I got a bit twitchy. Adrian battered me and fair play to him, but I've got to restore some pride now because I'm playing terribly."