Simon Whitlock ended his two-game losing run in the 888.com Premier League Darts in style with an 8-2 victory over Mark Webster at The Brighton Centre.
The Australian stormed to his third win of the season, hitting half of his chances at a double in a fine performance, averaging over 100 in the process.

Webster missed two darts to take the game's opening leg, with Whitlock winning that leg against the throw on double five before finishing 140 in style to move 2-0 up. Although Webster replied to a 180 from the Australian to win the third, but had no answer as Whitlock won the next five without reply.
The run began with a 120 finish, before Whitlock took out 80 to break throw and then traded 180s with Webster and punished three misses at double top from the Welshman to post double one and lead 5-1 at the break. Whitlock broke again to win a sixth leg, and double four in the next ensured at least a point at 7-1. Webster avoided a second 8-1 defeat of the season by finishing a pressure 66 on double top in the ninth leg, but Whitlock denied him any chance of a fightback by taking the next leg in 13 darts, sealing the win on double top.

"I've been missing a few doubles lately but they went in for me tonight and it's a boost," said Whitlock. "I've stopped using flight protectors on my darts and they are flying differently and landing slightly flatter in the board, and although it's going well in practice I'm working hard to get it right on stage. My form's not been too far away and I'm working hard to reach the play-offs, but there's a long way to go yet. I started slowly last year and finished second but my aim is just to finish in the top four."

Terry Jenkins overturned a 6-3 deficit against Adrian Lewis to claim the first draw of the 888.com Premier League Darts season in their clash at the Brighton Centre.
World Champion Lewis looked set to earn his fourth victory of the campaign when he took four successive legs in mid-game to move 6-3 up and within two legs of the win.
But Jenkins battled back to level and won the decider to snatch a point and share the spoils.

A tight match saw the pair share the opening four legs, with Lewis kicking off the match with a 13-dart finish and hitting double ten for the third leg. He also hit 180s against the throw in the second and fourth legs, which Jenkins won on double top before breaking throw for the first time in 13 darts, opening with a 180 and finishing tops once more.
Lewis replied to missing double 11 for a 142 finish in the previous leg by breaking back to win leg six, finishing 101 on double 12. He also took the next two despite 180s from Jenkins, and landed a maximum of his own and double top to win a fourth successive leg and lead 6-3.
Jenkins ended that run with a two-dart 81 finish, and punished four missed doubles from Lewis in the next on double five, before levelling on double 16 in the 12th leg. Lewis finished double four to ensure a point in the penultimate leg, but Jenkins kicked off the decider with a 180, and finished double five to grab a draw.

"I think I deserved a draw in the end but I'm happy with how I played," said Jenkins. "Adrian finished well in places and there wasn't a lot between us. "I'm pleased to get a point against the World Champion and it's another step towards the top four."

Lewis said: "A draw was probably a fair result in the end but if I'd hit the doubles in the 11th leg to go 7-4 up I think I'd have ended up winning. I was 6-3 up and I normally finish games off from that position but it was a different night. I took my foot off the gas a little and Terry hit back well. Three weeks ago I looked at the fixtures, and I had Simon Whitlock, Gary Anderson and Terry Jenkins in my next three matches, so to take two wins and a draw from that has put me back in the mix." 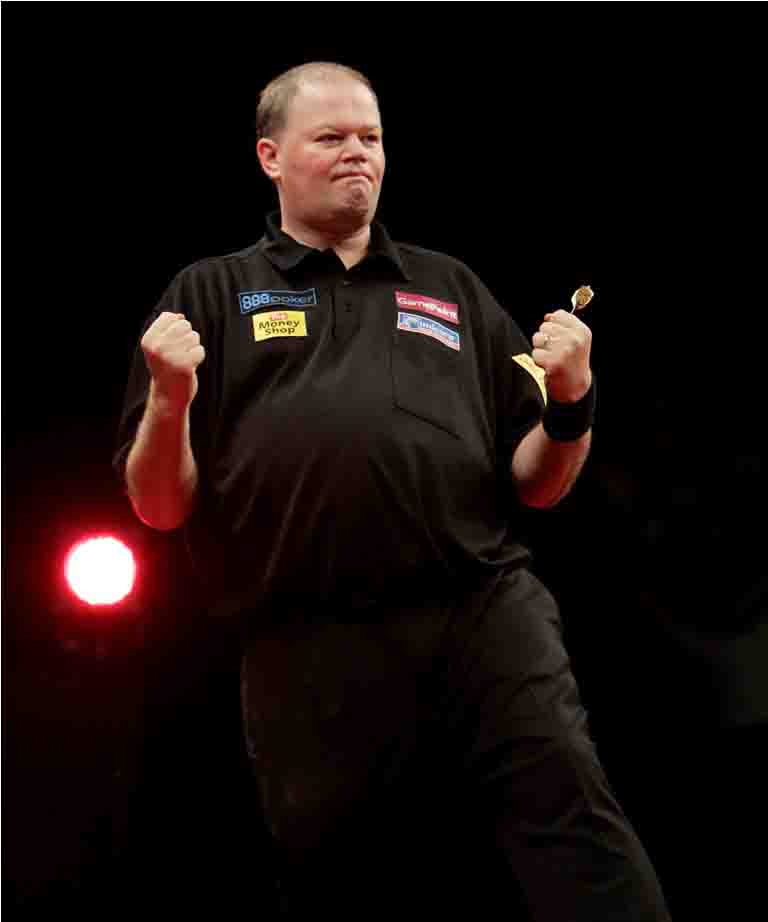 Raymond van Barneveld came from 2-0 down to claim an impressive 8-5 victory against Gary Anderson at the Brighton Centre, earning himself a fifth win of the 888.com Premier League Darts season.
The Dutchman prepared for next week's contest with Phil Taylor in style by seeing off the Scot, who suffered his third successive defeat after making a fine start to the season.

Anderson had begun the clash with van Barneveld well, punishing five missed doubles from the Dutchman to win the opening leg on double ten before holding throw in the second to double his lead. Van Barneveld hit back in the third, and three missed doubles from Anderson allowed him in to level the game on double 12 in the fourth.
The Dutchamn hit three 140 scores and double eight to take the fifth leg in 13 darts, but Anderson levelled in the sixth with a fine leg as he finished 301 in six darts courtesy of a 180 and a 121 bullseye finish. Van Barneveld, though, landed 180s in taking the next two legs and then took out double 18 for a 6-3 advantage.
Anderson replied with a 13-darter and then hit a 180 and a two-dart 81 finish in reducing the gap to one leg. However, van Barneveld hit double top at the first time of asking to ensure a draw at 7-5, and sealed victory with a 14-dart leg.

"I gave the first leg away but at 2-0 down Gary missed some crucial shots and let me in," said van Barneveld. "He didn't get going with his scoring and I was pleased. "I'm happy with the win and I feel comfortable on stage, and I'm pleased with how it's going so far. I've won five games out of seven and I'm looking forward to the second half of the season." 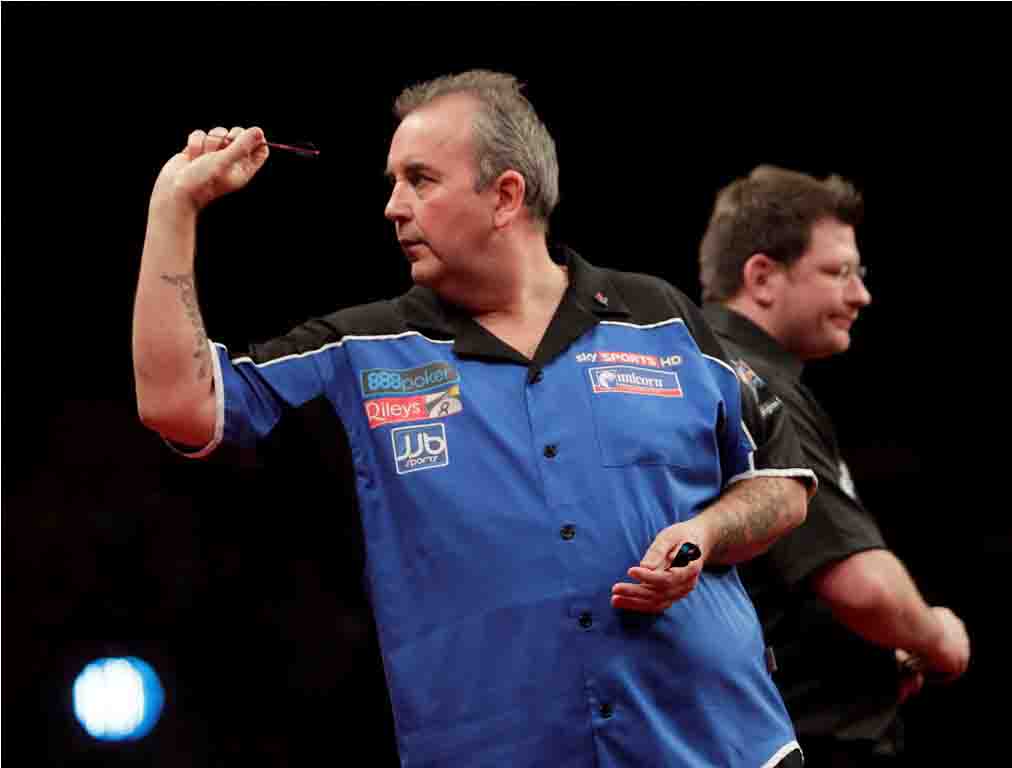 Phil Taylor picked up his biggest victory of the 888.com Premier League Darts season with an 8-1 rout of James Wade at the Brighton Centre.
Taylor had hit two nine-darters to defeat Wade in last year's Premier League final, and produced another brilliant display to average almost 106 against the left-hander. He hit 180s in each of the opening three legs to take command in the game, and after Wade took the fourth he won the next five without reply to seal a comprehensive win.

Taylor hit a 180 and double eight to win the opening leg, and after Wade missed his second dart at double top for a 100 finish in the next the Stoke ace stepped in to break on double 16. Taylor then began the third leg with a 180 and rubbed salt into Wade's wounds by finishing 100 in the way his opponent failed to in the previous leg, hitting single 20 and two double tops for a 3-0 cushion. Wade finished 81 to get off the mark in the fourth, but Taylor landed the bull for a 121 finish in the fifth and punished a missed bullseye from the left-hander on double top for a 5-1 lead at the break.
Taylor returned with scores of 140 and 180 in a 12-darter to lead 6-1, as he finished 82 on double top before hitting the same bed to follow up a fifth 180 in moving a leg away from the win. He also landed another maximum in the next, pulling clear of Wade before posting double eight to complete the rout.

"I knew James was under pressure because he's bottom of the table but I'm delighted with the win," said Taylor. "You sense it and I put him under pressure from the start of the game - we're like a pack of animals and you pick up on it and prey on him. James is a great player and I'm sure he'll come back fighting in the second half of the season, but it's another boost for me. I'm really enjoying it at the moment, and I'm excited about playing Raymond van Barneveld next week in Cardiff because I love playing him and he's in fantastic form."