Simon Whitlock picked up his second successive 888.com Premier League Darts victory with an 8-1 romp against Terry Jenkins at Exeter's Westpoint Arena.
The Australian followed up last week's defeat of James Wade with an impressive victory in Exeter, hitting four 180s and 40 percent of his chances at a double to celebrate his 42nd birthday in style.

The defeat was Jenkins' third in succession as he was restricted to just four darts at a double during the contest, with Whitlock showing his intentions from the start by opening with an 11-dart leg. Jenkins missed two darts to break back in the second to allow Whitlock back in on double ten, and the pair traded 180s in the third before the Englishman took out 76 on double top to get off the mark.
Whitlock, though, took the next for a 3-1 lead before breaking again in the fifth leg, hitting a 180 and double 16 for a 13-dart finish as Jenkins paid for one miss at double 11 for a 124 checkout.
Double ten gave Whitlock the next two legs either side of the break, and double five put him 7-1 up to pile on the misery for Jenkins. Whitlock then kicked off the next with a 180, giving him the advantage to post double top in completing the win.

"It's a second successive win for me and I'm pretty pleased with that," said Whitlock. "I wanted to have a big win and I managed to do that. I broke him early on and it gave me the momentum to go on from there." 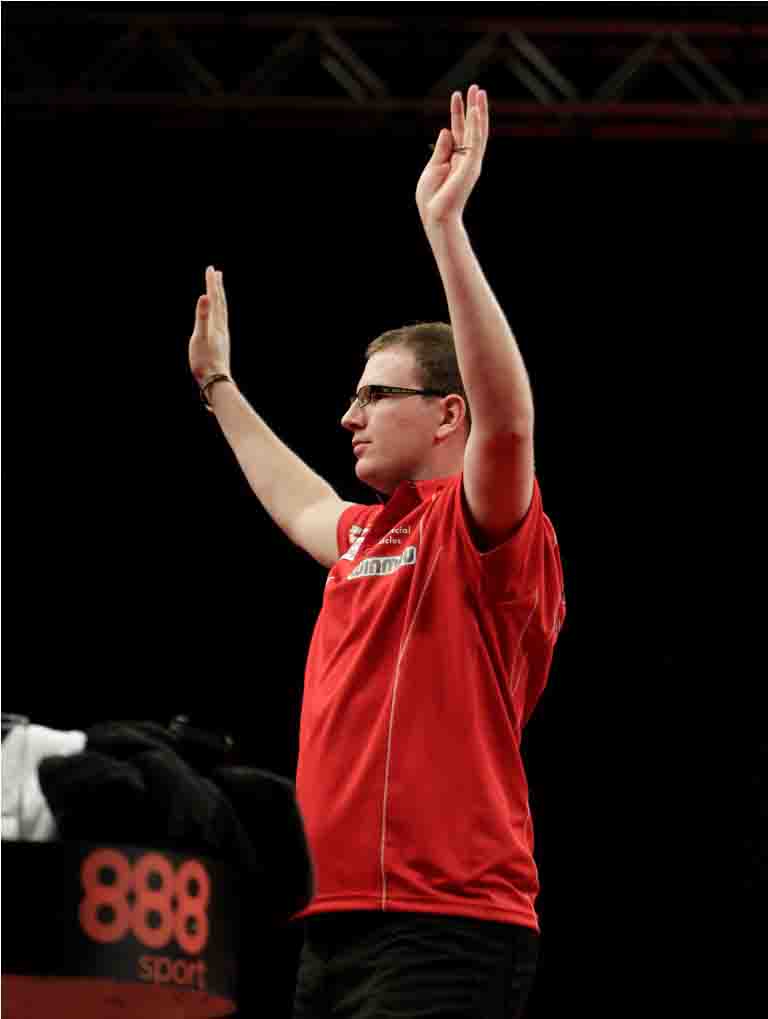 MarkWebster produced a sensational performance to average 110 in powering past World Champion Adrian Lewis 8-2 in the 888.com Premier League Darts in Exeter.
Webster bounced back superbly from an 8-1 trouncing by Gary Anderson a week ago to leave Lewis reeling with his finest televised display.
The Welshman took out three ton-plus finishes in hitting eight doubles from ten attempts, and his average of 110.19 has only ever been bettered by Phil Taylor since the Premier League began in 2006. Lewis played his part in a fine contest, sharing the opening four legs before Webster took six in a row to power to victory.

Webster began the game by holding throw twice with checkouts of 101 and 120, with Lewis replying by finishing a showpiece 80 of two double tops and a 93 finish for a 12-darter. Lewis, though, missed the bullseye for a 161 finish in the fifth to break, as Webster took out 124 on double 11 before breaking throw himself on double top for a 13-darter, in a leg which featured his first maximum of the game.
Webster matched that with another 180 and tops for a 5-2 lead as he took another leg with his first dart at a double to maintain a 100 percent finishing record. The Welshman erred for the first time in the eighth leg, but hit double ten at the third time of asking to lead 6-2, before trading 180s with Lewis in hitting a 12-dart finish to a leg away from the win.
Lewis hit another maximum of his own in the next, but three ton-plus scores left Webster on 96 after only nine darts, and he took out the finish in two darts to wrap up a brilliant victory.

"I was atrocious last week but this performance has put that well and truly behind me," said Webster. "I froze last week and I knew I had to put it right, and there's no better way to do that than beating the World Champion."

GaryAnderson's brilliant start to the 888.com Premier League Darts continued, as an 8-3 win over James Wade gave him a fourth successive victory.
The Scot's unbeaten opening to a debut Premier League Darts campaign sees him head into next week's clash with reigning champion Phil Taylor in the perfect fashion.
He condemned Wade, the 2009 Premier League winner, to a third loss in four matches as Anderson punished him throughout then contest.

The Scot made Wade pay for three missed doubles in the opening leg by hitting double top, and landed the same bed to double his lead against the throw. He then posted double 18 and double eight for a 4-0 lead, and after the paid traded 180s in the next Anderson had a chance to win a fifth leg without reply.
However, two missed darts at double 18 allowed Wade back, and the world number three took out double ten to get off the mark and hit the same bed to halve the gap to 4-2. Anderson, though, scrambled in double 16 with his third dart to win the seventh leg, but missed double top in the next as Wade was given a reprieve for earlier misses to hit double three for his third leg of the game.
A brace of double top finishes stopped Wade's fightback in its tracks as Anderson moved 7-3 up, and he hit a 180 before landing double four to complete his fourth straight win.

"It's four out of four and I'm over the moon with that," said Anderson. "James didn't get going at all but I'm happy with how I played and I'm looking forward to playing Phil Taylor next week. "I'm nipping at his heels now and I'm excited about playing him." 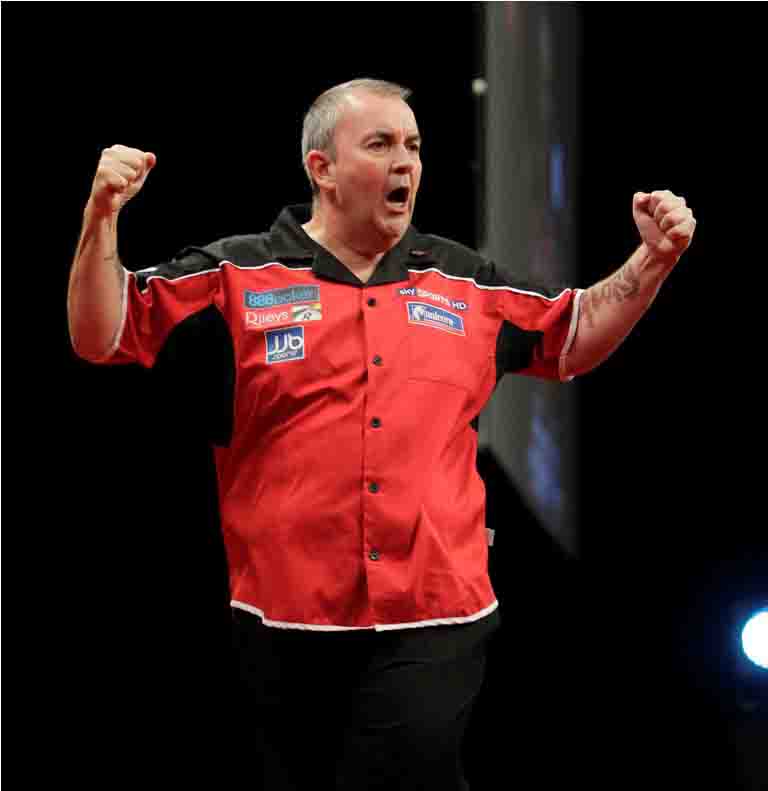 Phil Taylor defeated long-standing rival Raymond van Barneveld 8-3 to storm to a third successive 888.com Premier League Darts victory at Exeter's Westpoint Arena on Thursday.
Taylor picked up a tenth straight Premier League win over the Dutchman with a thrilling display in Exeter, initially taking a 6-0 lead before holding off van Barneveld's rally to take the win.
Van Barneveld had his chances and missed doubles in three of the opening six legs as Taylor took command, and after taking three successive legs to halve the gap further misses allowed the world number one to seal the win.

Taylor took the opening two legs on double top, breaking in 13 darts in the opener as van Barneveld saw darts at double top and ten land off-target. The Dutchman hit a 180 in the third but missed two more darts at tops before Taylor powered in a 147 checkout. Taylor then took out double eight to win the fourth, as van Barneveld waited on double top, before hitting a stunning ten-darter with scores of 180, 140 and 165 to leave double eight in taking a 5-0 cushion.
Van Barneveld was first to a double in the sixth, but two further misses at tops gave Taylor a sniff at 106, and he clinically dispatched the finish to win a sixth successive leg. Taylor also had a dart to win the seventh, missing double top for a 113 finish, as van Barneveld finished 76 on double 18 to finally get off the mark.
The Dutchman then took out 111 and another 76 finish to pull back to 6-3 and leave Taylor sweating. He hit a 180 to open the tenth leg, but saw five darts to win the leg and reduce the gap to 6-4 go begging, as Taylor eventually punished him on double one. The pair also missed chances at doubles in the next, with Taylor seeing three match darts slip away before finally posting double eight to see off the Dutchman.

"If I'd won the seventh leg I would probably have won 8-0 but he started clawing back at me," said Taylor. "He missed crucial doubles to make it 6-4 and that turned the game because I was starting to think I'd settle for a draw at that point.He had some chances early on too but his head dropped a bit and he doesn't seem to be throwing as naturally as he can.I love playing him, he's a great player and it's a massive match to be involved in, so I'm happy to get the win again. Playing Gary Anderson next week in Manchester will be brilliant for me and I'm really up for it now."