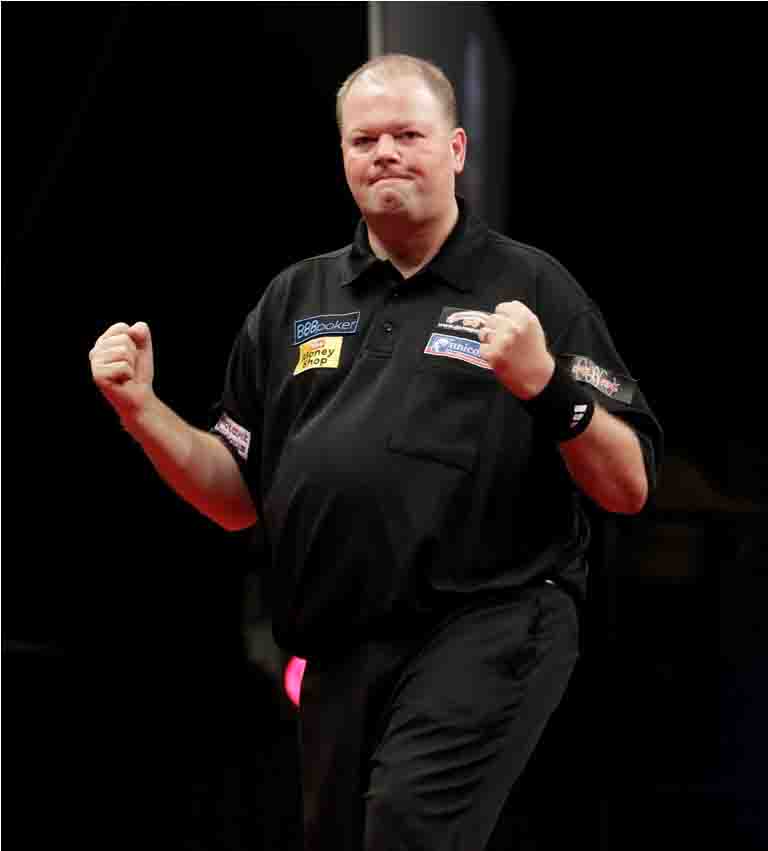 Raymond van Barneveld produced a sensational display of finishing to secure his first 888.com Premier League Darts victory of the season, defeating Simon Whitlock 8-3 in Nottingham.
The Dutchman rolled back the years with a vintage performance as he hit four ton-plus checkouts to bounce back in style from an 8-6 loss to Terry Jenkins in week one.
Whitlock had hit eight finishes from nine attempts in defeating van Barneveld last season, and was on the receiving end of the five-time World Champion's brilliance on this occasion.

The game had begun slowly, with van Barneveld missing doubles in the opening two legs but landing double 12 to break and double two in the second. Whitlock fired in a brilliant 140 to get off the mark, but saw van Barneveld reply with a 180 in an 11-dart leg to lead 3-1.
Double four gave Whitlock the fifth, but van Barneveld produced killer blows with finishes of 116 and 160 either side of the break in moving 5-2 up. The pair traded double top finishes in the next two legs to leave van Barneveld 6-3 up, but Whitlock hit his third 180 of the game in the tenth to leave a finish.
However, he would not get a shot at the 121 as van Barneveld powered home a 156 checkout, and the scenario was repeated in the next when, with Whitlock waiting on 70 after another maximum the Dutchman finished 141 to take victory.

"I loved that," said van Barneveld, who previously hit five ton-plus finishes in the 2006 Premier League Darts in a win over Wayne Mardle. "I know what I can do and for the last two years I've only done it on the practice board and not on stage regularly. Everyone knows I can do it and I'm very pleased with this win. I've been sloppy at times but I'm more consistent at the moment and it's giving me confidence. I've tried different types of flights and took the decision to go back to my old, kite-shaped flights, and I've been working hard on my finishing and it paid off tonight."

Whitlock admitted: "His finishing was brilliant and I've no complaints with that. I had left myself a finish a few times when he took out his big shots and it's great to see him playing so well." 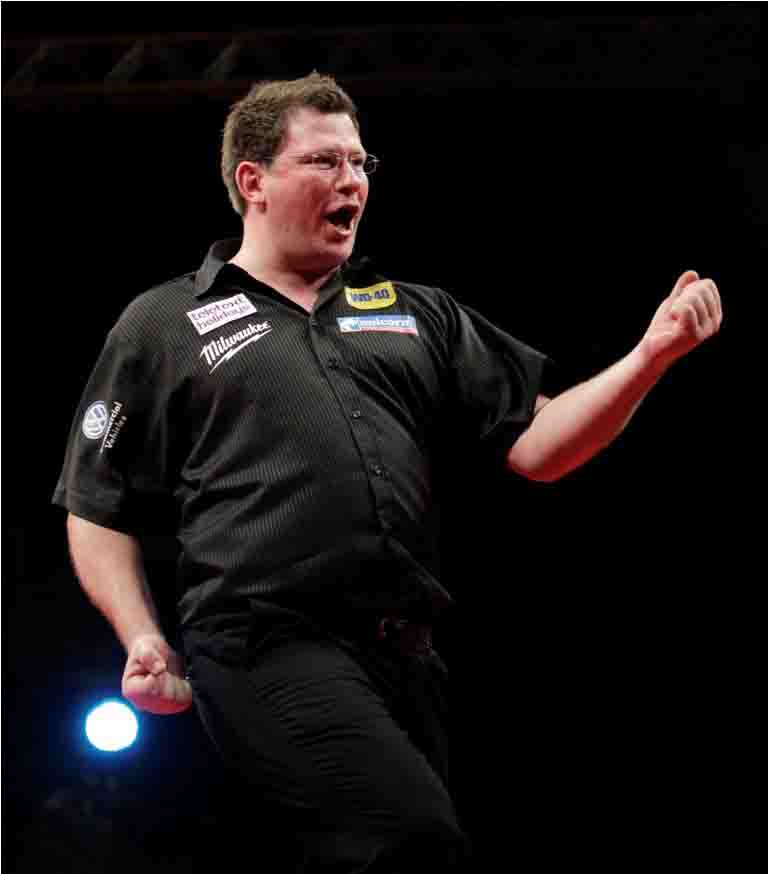 James Wade took out a brilliant 136 finish to win a deciding leg against Adrian Lewis and gain his first 888.com Premier League Darts victory of the season.
Wade, the 2009 Premier League Darts champion, had been disappointing with an 8-3 loss to Mark Webster on the opening week at The O2, but hit six 180s and three ton-plus finishes in seeing off the World Champion.
Lewis had trailed 7-4 before hitting back to force a deciding leg, but crucially missed two match darts at double 18 before Wade produced his showpiece winner.

The opening two legs went with the throw before Lewis missed the bull for a 122 finish in the next, with Wade posting double ten to edge 2-1 up. The duo then shared six 180s in the next three legs in a brilliant run, with Lewis taking out checkouts of 121 and 100 for 12-darters and Wade finishing a 14-darter to leave the game tied at three-all.
Wade won the seventh with a 13-darter and then took the game's first break with a 102 finish, punishing six misses from Lewis, to lead 5-3. The left-hander also took the next, hitting a 180 and double 17, to move two legs before Lewis won the tenth on double ten to pull back to 6-4.
A sensational 141 checkout from Wade ensured he would take at least his first point of the season, and he was waiting on a finish in the next two as Lewis kept the match alive with finishes of double 18 and a tricky double 16. He hit three ton-plus scores to be first to a finish in the decider, but missed two darts at double 18 for a 96 finish to give Wade a look at 136, and he piled in two treble 20s and double eight to grab the win and both points.

"I'm really pleased with that, because last week I felt embarrassed and like I didn't belong in the Premier League, and deep down I know I do belong here," said Wade. "I've practised hard since and showed that when I believe in myself I can play so well. I wanted to prove something tonight and I need to come back next week - and the week after - with the same attitude, which will make me a better player."

Lewis said: "I showed a lot of character to come back and I put him under pressure, but the 136 was a fantastic shot. He was great and took out a few great finishes. I'll be back next week and I'm in this tournament to win it. It's a long 14 weeks and this is only the first two weeks." 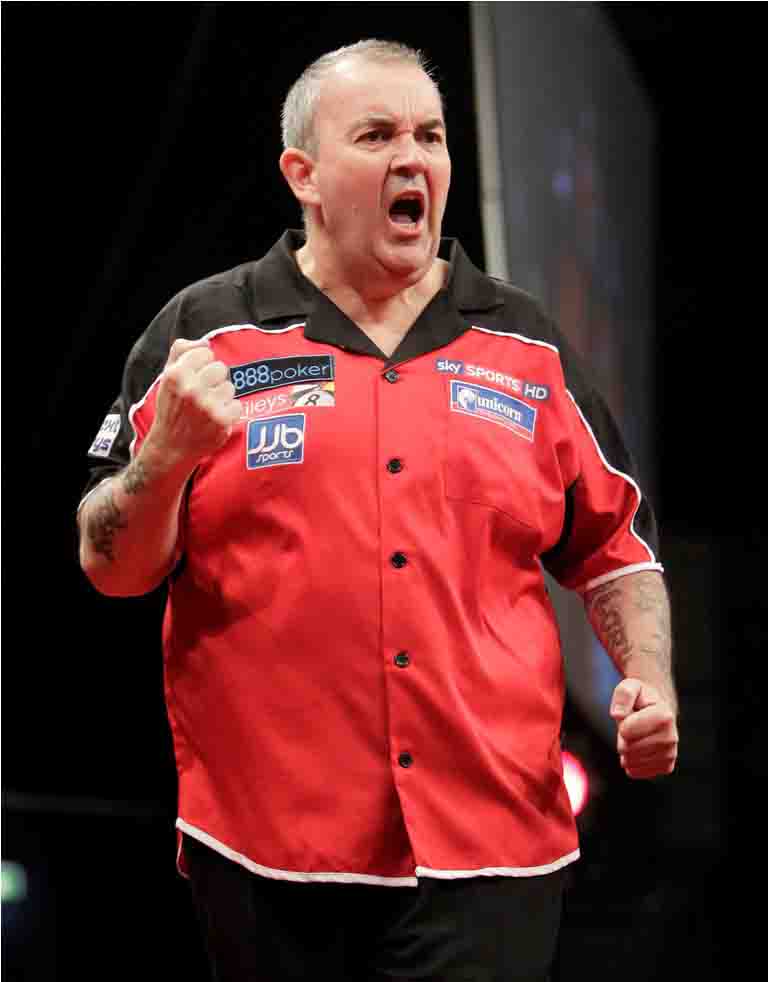 Phil Taylor returned to top form with a brilliant 8-5 win over Mark Webster as the 888.com Premier League Darts visited Nottingham's Capital FM Arena on Thursday.
Taylor looked a shadow of the player who romped to last year's Premier League title when he slumped to an 8-2 defeat against Adrian Lewis on the opening night at London's O2 Arena last week.
However, he produced a fine display of power scoring and clinical finishing to make the ideal response, and send a chilling message to his Premier League rivals. Webster played his part with finishes of 170 and 160, but could only applaud a fine Taylor performance as the world number one avenged his recent World Championship quarter-final defeat to the Welshman.

Taylor set his stall out early on, hitting double 16 for the opening leg and five perfect darts in taking the second against the throw, despite Webster hitting a 180 in reply. Taylor also took the third in 14 darts to lead 3-0, and hit two 180s in the fourth only to see Webster take out a superb 170 checkout, earning himself his first leg of the game and a £1,000 bonus as the night's highest finish.
Taylor roared back with legs of 12 and 11 darts in taking two of the next three in leading 5-2, with Webster following up a 13-darter of his own with a stunning 160 checkout - after his opponent had missed the bull for a 161 finish. The next two were also shared before double five saw Taylor moved 7-4 up, and the five-time Premier League winner celebrated in style as he secured at least a point.
Double six saw Webster win a fifth leg, but Taylor was not to be denied as he piled in a seventh maximum and double 16 to ensure victory.

"I hit rock bottom last week but I feel on top of the world now," admitted Taylor afterwards. "I had a couple of days off to get my head right and now I'm going to get better each week. I fought hard for the win tonight and Mark played really well to push me. He took out a couple of brilliant finishes and they inspire you to hit back."

Gary Anderson continued seamless introduction to the 888.com Premier League Darts with an 8-4 victory over Terry Jenkins at Nottingham's Capital FM Arena.
The Scot followed up his opening night win against Simon Whitlock with another fine display, averaging over 102 in sweeping past Jenkins.

Much of the damage was done early on with three breaks of throw as Anderson took a 4-1 lead, with a 13-dart finish from Jenkins in the second leg bettered by an 11-darter from the World Championship finalist. Jenkins took out 120 in the sixth and reduced the gap to 4-3 when Anderson missed three darts to win the seventh, with a 177 from the Ledbury ace setting up double 19.
Anderson, though, ended the comeback on double eight and hit a 180 in the next before a 13-dart leg saw him take a 7-3 advantage. Jenkins replied on double 15 to raise hopes of matching last week's comeback against Raymond van Barneveld, but Anderson was swift to wrap up the win with a 12-dart finish, completed with a 121 bullseye checkout.

"I'm really pleased to have won again," said Anderson. "We both missed a few doubles at times and it could have been different if Terry hadn't missed some crucial doubles. I'm still a bit nervous in front of the big crowds but I'm settling down and enjoying the Premier League. I'm aiming to hit a 120-plus average during the Premier League at some point and I think it's possible - I've just got to do it."