James Wade rounded off his 888.com Premier League Darts campaign with an 8-4 win over Terry Jenkins at the Metro Radio Arena in Newcastle.
The 2009 champion entered the final week unable to qualify for the semi-finals, despite a run of four games unbeaten in the second half of the season, but produced a polished display in front of 7,000 Newcastle fans.

He began the game brilliantly, hitting two 180s in winning the opening leg before taking out the maximum 170 finish to break throw in the second. After checking out double top to win the third, he missed one dart at the same bed in leg four as Jenkins posted double ten to get off the mark.
Wade added further checkouts of 142 and 104 in winning two of the next three legs as he moved 5-2 up - Jenkins finishing double top in between - before he also won the eighth leg to establish a four-leg cushion. Wade opened the ninth with a 180, but Jenkins replied with a 177 and two 140s before winning the leg on double two, and double eight saw him pull back to 6-4 in the next. Wade, though, regained top gear to hit his fourth 180 of the game in the next, finishing double ten to move a leg away from victory, which he sealed on double eight.

"After the start I made to the game, I think I was always going to win and it was just a matter of how long it took me to win," said Wade. "Unfortunately the win tonight doesn't change anything in the league table. It's been a poor Premier League season to miss out on the Play-Offs, but basically I wasn't good enough at the beginning of the season. The darts are starting to come back and I'm going to prepare well for the UK Open now and go to Bolton in confident mood."

Raymond van Barneveld ended the 888.com Premier League Darts regular season with an 8-4 win over Mark Webster - but admits he needs to improve if he is to triumph in next Thursday's Play-Offs.
Van Barneveld will enter next week's semi-final against Gary Anderson on the back of a five-game unbeaten run, after inflicting Webster's 11th defeat of his debut Premier League Darts campaign.
The Welshman hit two ton-plus finishes against van Barneveld, who proved too strong in the final outcome.
Van Barneveld hit a 180 in the opening leg, but paid for two missed doubles as Webster finished 109 to lead. The Dutch star hit back with a 107 finish, and broke on double top in the third following two misses from Webster, before hitting double 16 for a 3-1 cushion.
Webster hit back with a 14-darter and also won leg seven with a 108 finish, but that was his only answer as van Barneveld took four legs from five in moving 7-3 up. Webster finished his second 14-darter of the game to win a fourth leg, but missed three darts to keep the game alive in the next as van Barneveld sealed victory on double five.

"Averaging 90 is now how I can play but I had already qualified and knew I'd be playing Gary in the semi-finals so it was a hard game," said van Barneveld. "If I'd known I had to win it may have been different but I will prepare myself for the semi-finals now. Mark gave me a lot of chances and all that mattered was that I got the win. I'll do everything that I can to win this tournament next week, and I still believe in myself and what I can do." 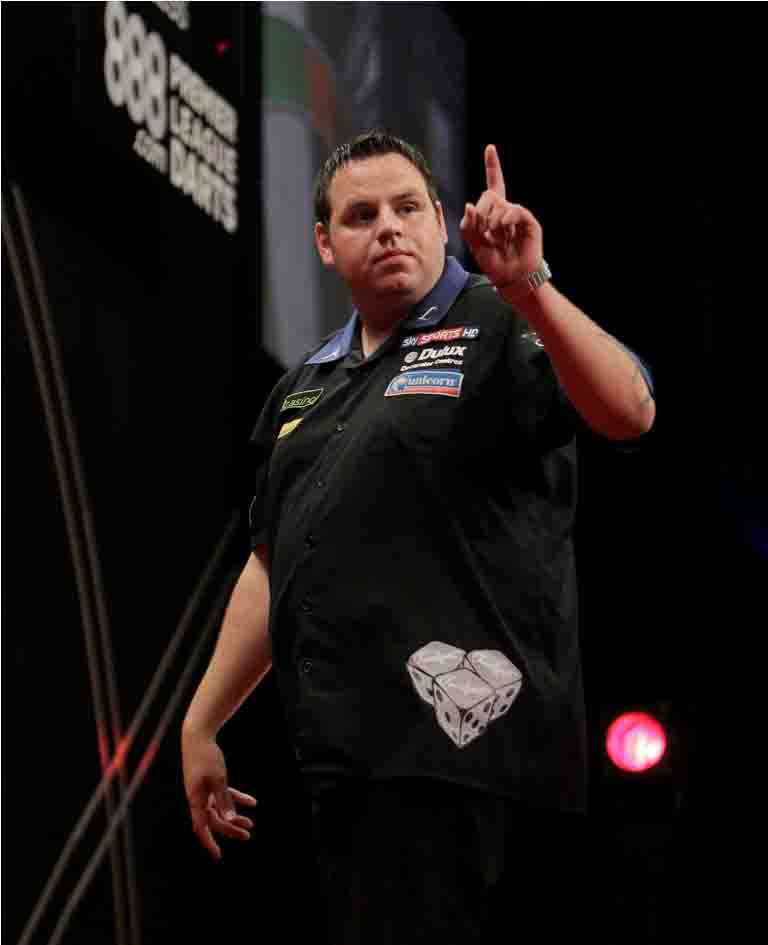 Adrian Lewis secured a spot in the 888.com Premier League Darts Play-Offs in dramatic fashion, snatching a draw against Gary Anderson in his final league match at the Metro Radio Arena in Newcastle.
Lewis looked set to coast into the semi-finals when he took a 5-2 lead against the Scot - who hit back brilliantly with five straight legs.
The World Champion seemed on course to suffer the defeat which would have opened the door for Simon Whitlock - who would have needed to win against Phil Taylor in the night's final match - but Lewis showed his class to win the final two legs and claim the point he needed to seal fourth.

Lewis opened the game well, winning the opening leg in 13 darts and responding to Anderson finishing 70 for the second by winning the next three without reply to lead 4-1, twice punishing misses from the Scot. Anderson posted his second maximum of the match in the sixth leg, which he won in 13 darts on double three, before Lewis posted double 16 to move 5-2 up.
Anderson, though, began his fightback by landing double eight in the eighth, before finishing a brilliant ten-dart finish, double one for a 15-darter and an 11-dart leg as his spectacular scoring hit top gear as he snatched the lead. He added a fifth 180 in a 14-dart finish to move 7-5 up, ensuring he would gain a point and raising Lewis' nerves.
Anderson also hit a 180 in the next leg, but missed three darts for the match as Lewis posted double five to force a decider. The pair traded 180s, but it was Lewis who was first to a finish as he broke throw with double top for an 11-darter, sealing the point which ensured a semi-final with reigning champion Phil Taylor at the Wembley Arena next week.

"I made it hard work for myself," said Lewis. "When I went 5-2 up I should have got the job done but I took my foot off the gas when I shouldn't. I dug out the result and one thing I am doing now is winning ugly. If you can do that, it's a good thing to have on your side, and I have a lot more in the locker yet. I'm World Champion and I can go up there and hit a 110 average, and that's what I'm expecting to do next week against Phil. If I perform like I can do next week, I'll win it."

Anderson said: "I had nothing to lose and I went out to enjoy the game, and I did that. I gave myself a chance to win the game but I missed and Adrian didn't, and he did well in the last two legs. I'm feeling good going into the Play-Offs and I'll enjoy playing Raymond next week. I'm confident and looking forward to it." 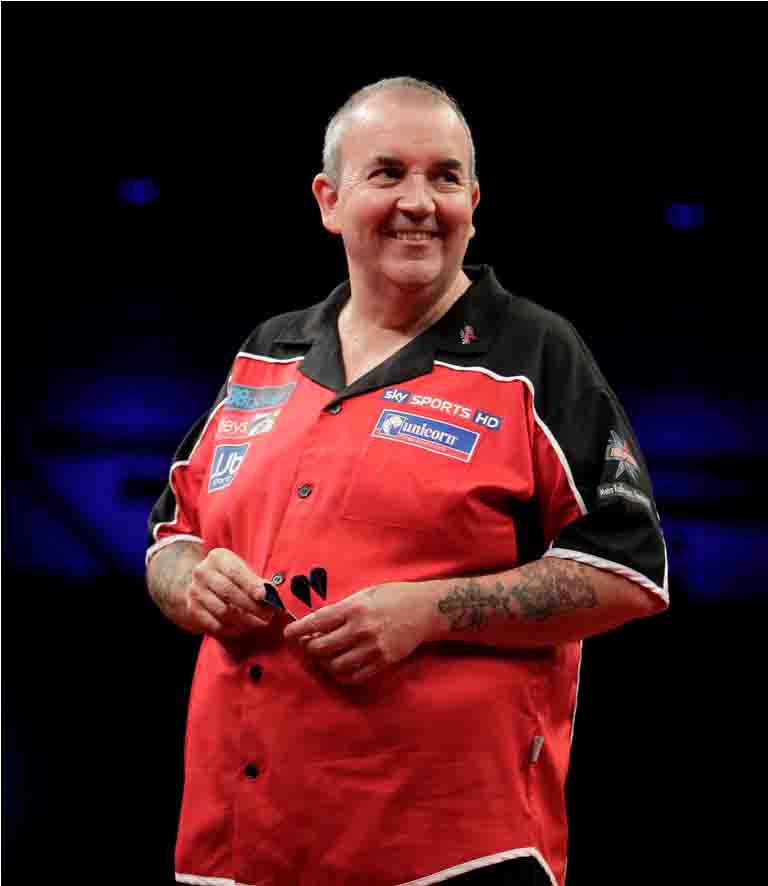 Phil Taylor ensured that he will enter next week's 888.com Premier League Darts Play-Offs on a high following an 8-3 victory over Simon Whitlock at Newcastle's Metro Radio Arena.
Taylor will return to the Wembley Arena - the scene of his famous two nine-dart finishes a year ago as he regained the title - in top form following a 13th successive victory in the league phase.
He will now take on World Champion Adrian Lewis in the opening semi-final next Thursday, having seen off Whitlock - whose chances of finishing in fourth were ended on the night in Newcastle.

Taylor landed a 180 in taking the opening leg of the clash with Whitlock, who had posted a maximum of his own and added a second in levelling the game. Taylor edged the third, and broke in 13 darts to lead 3-1 before finishing 95 on the bullseye and double top for a 5-1 advantage at the break.
Taylor then posted two 180s in winning his sixth leg of the game in 13 darts, and landed double top in the next to move one away from victory at 7-1. Whitlock - who had seen his feint Play-Off hopes ended when Lewis drew with Anderson earlier in the night - hit back with a 94 checkout and double ten to win the next two legs, but Taylor sealed victory with a 13-darter on double 14.

"I thought Simon was going to push me harder but it was hard for him early on because he didn't have the semis to play for any more," said Taylor. "He played well in the second half of the match though and I enjoyed it. I was thinking about playing well to get ready for the semi-finals because I'm after Adrian, big-style. I'd like to go at Adrian as hard as I can next week - he's a great player and a lovely lad but there's no love lost when we get up there next week."