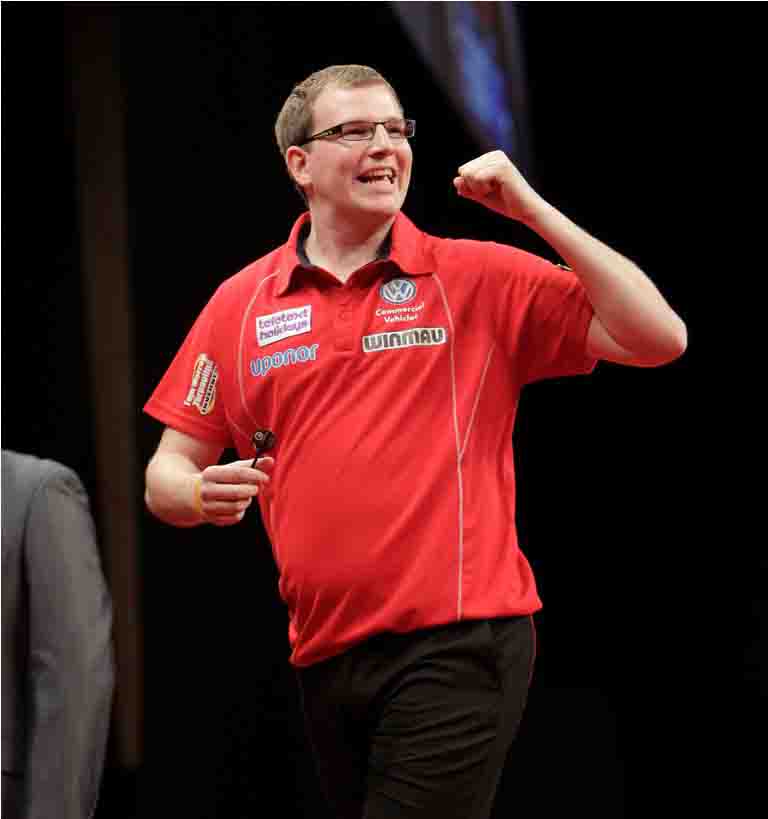 Mark Webster claimed his first point since week four of the 888.com Premier League Darts as he drew with Simon Whitlock at the BIC in Bournemouth on Thursday.
The Welshman had lost eight successive matches ahead of the visit to Bournemouth in sliding to the foot of the table in his debut season, but showed his quality in sharing the spoils.
Webster actually led 7-6 before Whitlock claimed the deciding leg to snatch a point, keeping alive his own Play-Off chances ahead of the night's other games.

Left-hander Webster opened well, breaking throw on double 11 in the opening leg and hitting a 180 in the second, but Whitlock hit double top to level and landed a maximum and double six in leading 2-1.
Webster hit double ten to level in the fourth, and tops to take the sixth and square the match after Whitlock had posted a 14-darter in between. The Welshman broke in leg seven to lead 4-3 on double top, only for Whitlock to reply in the same fashion to take the eighth, before finishing 90 with a bullseye, double top combination. Webster levelled once more by finishing double top in the tenth, and took out a superb 127 on double eight to lead for third time in the game at 6-5.
Whitlock hit a 180 and double seven to level, but when Webster posted a maximum to set up a double 12 finish he ensured he could not lose by leading 7-6 - punching the air in delight at claiming his first point in nine weeks. Whitlock, though, was determined to deny him both points, and hit a 180 against the throw in the deciding leg before posting double 16 to grab the draw.

"It wasn't brilliant but I needed a result," said Webster. "To be throwing for the match [in the final leg] and not to win is a bit disappointing, but if someone had said before the match that I'd get a point I'd have taken that. It's been tough, it's been disheartening and I've got upset. You get down with yourself and start to doubt yourself but I believe I belong here and I've earned my spot. "I haven't done myself justice at times but it's a big result for me and I can build on it. I wasn't content with a draw but it's a point and it means a lot for me." 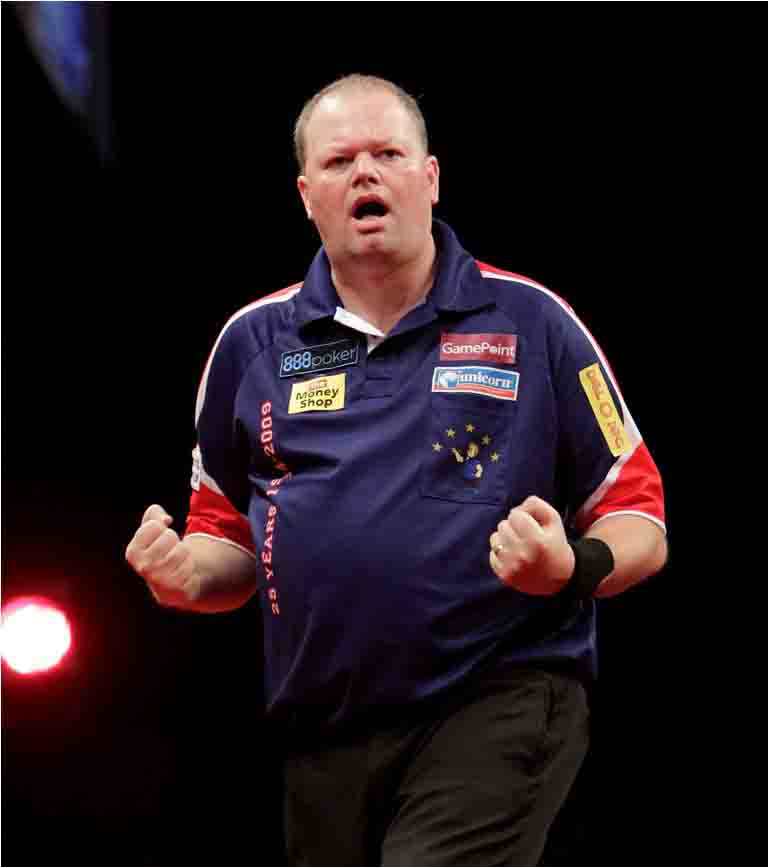 Raymond van Barneveld secured a place in the 888.com Premier League Darts Play-Offs with an 8-4 win over Gary Anderson at the BIC in Bournemouth - setting up a semi-final between the pair at Wembley in a fortnight.
The Dutch ace had missed out on a top-four finish in last year's Premier League for the first time since he joined the PDC in 2006, but a seventh win of this season means he will compete for the £125,000 title at the Wembley Arena.
The result means that the pair will meet again in the semi-finals on May 19, after van Barneveld completed a Premier League Darts double over the Scot.

The pair made electric starts, sharing five 180s in the opening four legs to bring a sell-out BIC crowd to its feet, with van Barneveld posting the first in the opening leg only to see Anderson take the lead with a 14-dart finish. The Scot hit two maximums in the second, but missed two darts to break throw as van Barneveld posted a 62 finish to level. Anderson landed another 180, and a 140, on his way to the third, although van Barneveld missed the bull for a 164 finish before the Scot posted double top to lead 2-1.
Van Barneveld opened the fourth with a 180 to raise hopes of repeating his 2006 nine-darter in Bournemouth, and hit two more treble 20s before his sixth dart fell short of a second maximum, although he went on to win the leg on double four with his eighth dart at a double. The next two legs were shared with 14-dart finishes, before two misses from van Barneveld allowed Anderson to sneak in and take the seventh on tops. Van Barneveld levelled in the next, and took a key break in leg nine after Anderson followed up a 180 with a bounce-out of the bullseye for a 161 finish and seventh further missed doubles.
Double four gave the Dutchman a break and a 5-4 lead, and when he hit a 180 to leave 76 in the next, double 18 put daylight between the pair for the first time. Van Barneveld posted a fourth maximum of the game in the next, landing double top to ensure a point at 7-4, and sealed victory by hitting the same bed in the next after Anderson saw two darts at double 16 to stay in the game miss their target.

"I'm really happy to be in the Play-Offs at Wembley and I'll be excited about playing Gary again," said van Barneveld. "We all know what Gary can do and this was a bit of revenge for him winning 5-1 in the World Championship to beat him twice in the league. I'll play him in two weeks time but I remember beating Roland Scholten twice in the league and he beat me in 2006 so I can't take it for granted. It's a new game at Wembley." 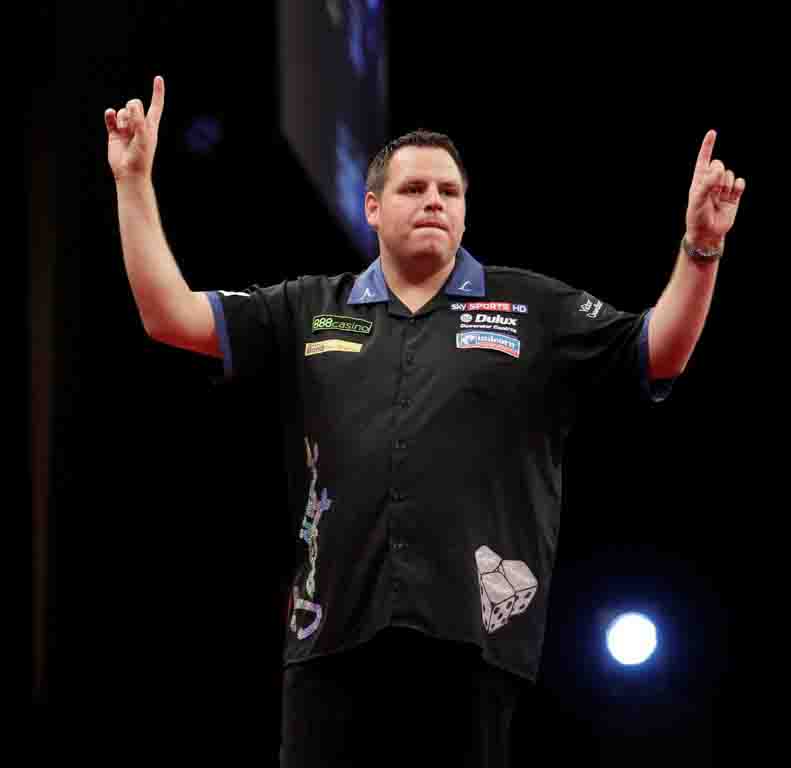 Adrian Lewis produced a second half super-show to defeat Terry Jenkins 8-3 and put one foot into the 888.com Premier League Darts Play-Offs.
The World Champion showed his quality by winning six straight legs to come from 3-2 down to streak to victory - moving himself two points clear of fifth-placed Simon Whitlock ahead of the final league night next Thursday.

The pair had slugged out the opening four legs, which each went with throw, before Jenkins produced a 14-dart leg to lift the quality in taking a 3-2 lead.
Lewis, though, replied in kind before making a classy return from the break, finishing 100 for an 11-darter and then taking out 112 and 144 in the next two legs to surge 6-3 up. Jenkins battled to hit back in the next, but Lewis posted tops to win the tenth before securing victory on double 14.

"There was a lot of pressure on us both early on and that showed," said Lewis. "I gave myself a talking-to at the break and played like a World Champion after that. "My scoring wasn't fantastic but I was hitting doubles and the 144 was a killer. I think I played really well in the second half of the match and I'm confident that I'll finish fourth now."

Phil Taylor produced the second highest average of the 888.com Premier League Darts season of 109.36 as he ended James Wade's Play-Off challenge with an 8-4 victory at the BIC in Bournemouth.
Taylor won his 12th successive match since a loss to Adrian Lewis on the opening night with a classy display to see off Wade.
Wade had won three and drawn one of his last four matches to move into fifth place in the league table, but the loss ends his hopes of claiming a top-four finish.
Wade, the 2009 champion, began well by winning the opening leg in 14 darts, finishing 80 clinically, before Taylor hit back with a brilliant 157 checkout - earning himself a £1,000 bonus as the night's highest finish. Taylor then punished two misses from Wade to break with a 13-darter in the third and traded 180s from Wade before winning the fourth on double four for a 3-1 cushion. Taylor also hit two 180s in the fifth to leave 56 in the next, but Wade hit a maximum of his own in between and took out a pressure 98 on double 12 to pull back to 3-2.
/ The left-hander was sat on a double in the next as Taylor finished 72 to enter the break with a two-leg lead, which he extended after the restart by hitting a maximum and an 88 finish for a 12-darter to break. Wade won the next two, finishing a 13-dart leg on tops before posting double 18 for the ninth in pulling back to 5-4 down, but saw his chance to level slip away in the tenth leg.
Taylor hit three ton-plus scores to leave 40 after 12 darts, and posted double top to restore a cushion at 6-4 before hitting a fifth 180 in a 12-darter to break throw for a 7-4 advantage. He also opened the next with a 177 to take command, although Wade hit a 180 and missed the bull for a 121 finish to stay in the game before Taylor closed out victory on double eight.

"James played really well and it was a brilliant game," said Taylor. "I'm delighted to have won because he pushed me hard and I had to produce some good finishes there to beat him. I'm building up to the Play-Offs now and I'm looking forward to it, but I want to win against Simon Whitlock next week and keep winning."

Wade has reached the final in his previous three Premier League Darts seasons, winning the event in 2009, but will miss out on the Play-Offs this time after jumping from bottom at the half-way stage to fifth going into the clash with Taylor.
"I shouldn't have left it so late in the season to play so well and it's my fault I've missed out on the top four," said Wade. "I played pretty well against Phil but you can't miss as many doubles against someone as good as Phil. I honestly believe he plays his best darts against me and I hope I've earned that with how I play against him