Terry Jenkins produced his most clinical performance of the 888.com Premier League Darts season in defeating Mark Webster 8-4 at the Echo Arena, Liverpool on Thursday.
Jenkins, who had to win to keep alive his feint hopes of qualifying for the Play-Offs at Wembley next month, obliged by hitting eight doubles from 11 attempts during the contest.
Webster was in the game for the first half as he bidded to end a run of seven straight defeats, but two 11-dart legs in the middle of the contest turned the game Jenkins' way.

Left-hander Webster, who had lost his last four games 8-1, made a confident start with two 140s and won the opening leg on double ten before Jenkins replied in kind to win the second. Webster finished 78 on double 12 to win the third leg, and his second of the game, before a 100 from Jenkins again saw him level. Welsh ace Webster hit back strongly, opening the fifth with scores of 180 and 140 to move 3-2 up, on double three, only to be left reeling by a superb pair of 11-darters from Jenkins, which included opening maximums in each leg.
That put the 2007 Premier League finalist 4-3 up, and he finished 84 and 76 to win the next two legs and continue his brilliant form on the doubles, with six out of six as he led 6-3. He did miss for the first time in the next leg, with three darts at double eight, as Webster cut the gap with double nine, but the left-hander then wasted two darts to win the 11th as Jenkins moved 7-4 up. The Ledbury ace then sealed victory in the next, finishing 77 on double top to claim his third win of the season.

"There was a lot of pressure on both of us," said Jenkins. "Mark hasn't deserved the results he's got in the last few weeks but I needed to beat him and I did that. My scoring wasn't brilliant but I was pleased with how I finished, especially under pressure in some of the legs." 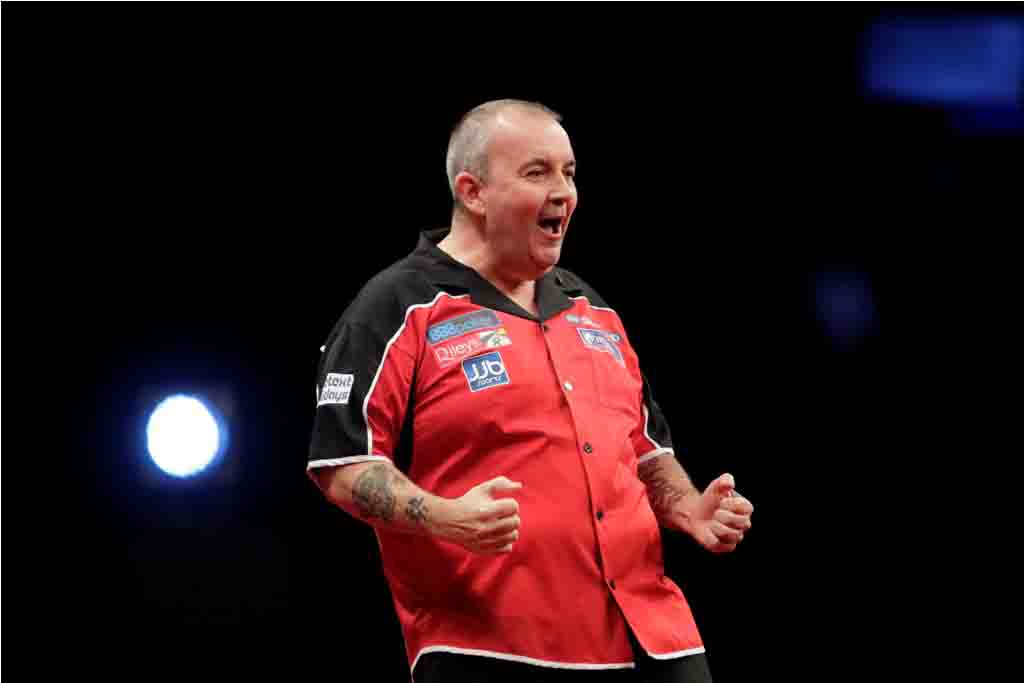 Phil Taylor asserted his dominance at the top of the 888.com Premier League Darts league table with a crushing 8-3 win over second-placed Gary Anderson at the Echo Arena, Liverpool.
Taylor's winning run in the tournament was extended to 11 matches as he swept aside his closest rival, completing a Premier League double against the Scot.
Anderson had hit 11 180s a week ago in defeating Simon Whitlock in Birmingham, but failed to hit the same high against Taylor, landing only three maximums and missing seven of his ten darts at a double in the match.

Taylor did the damage early by punishing a slow start from the Scot, hitting a 180 and double two to break in the opening leg, double 14 for the second and traded maximums with Anderson before an 11-darter saw him win the third. Anderson opened the fourth with scores of 180 and 140, but when those were followed with an 85 and 48 Taylor swooped, hitting a 180 to leave 94, which he took out on double six. Anderson posted double top at the first time of asking to get off the mark in leg five, with only his second dart at a double, but missed the bullseye to win the next as Taylor took out 79 for a 5-1 lead.
Taylor landed another 180 in a 13-darter to win his sixth leg, before Anderson hit back with a 105 finish and tops for a 14-darter to pull back to 7-3. Taylor, though, showed no mercy when Anderson failed to hit the single 20 to leave tops in the 11th leg, as the Stoke star posted double eight to seal a comprehensive win.

"The fans expected fireworks and I thought Gary was going to play brilliantly," said Taylor. "I could relax a little bit because I've qualified. A 101 average is okay but Gary didn't fire on all cylinders."

Anderson admitted: "Last week I played well but this was atrocious compared to that. Phil wasn't as good as he has been but I never got going - my darts didn't flow right and he beat me up. "He hit the 180s to put pressure on me to miss." 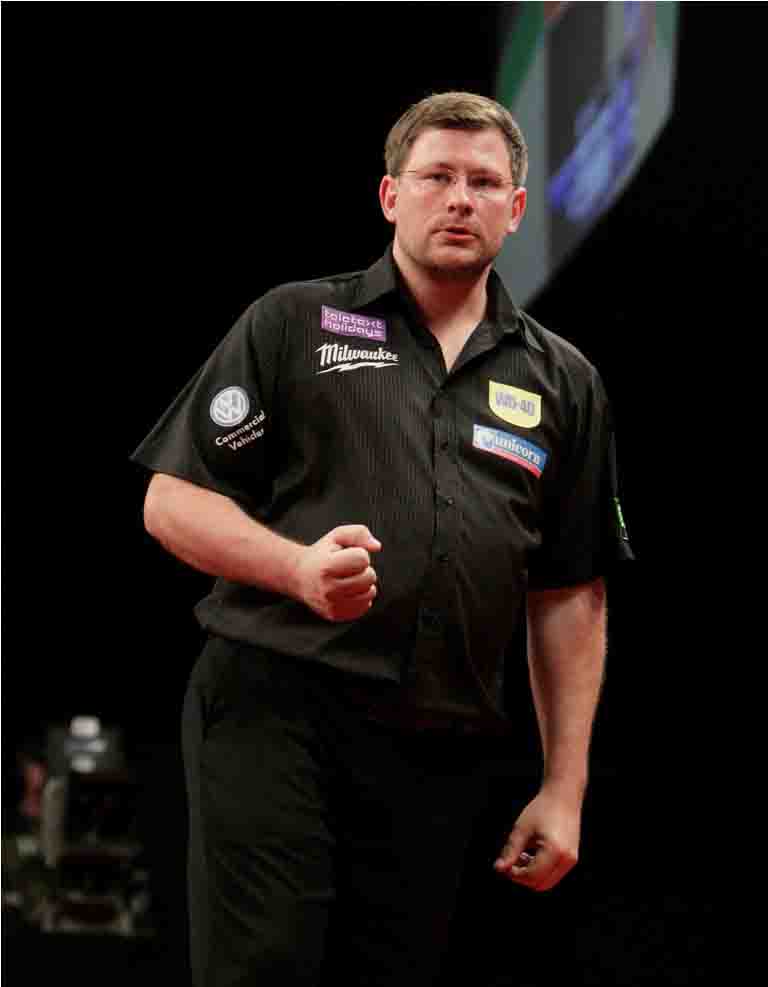 James Wade finished 138 in the deciding leg of his clash with Raymond van Barneveld to snatch a draw and keep alive his hopes of qualifying for the 888.com Premier League Darts Play-Offs.
Van Barneveld looked set to secure a top-four finish when he hit two ton-plus checkouts in moving 7-6 up, but Wade showed his fighting spirit to claim a point.

The left-hander had broken throw in the opening leg after van Barneveld missed the bullseye for a 127 finish, but three misses in the second allowed the Dutchman to hit back on double eight. Van Barneveld finished 92 and 124 to win two of the next three, only for Wade to level at three-all with finishes of double top and ten. van Barneveld finished 68 to take the seventh, and broke with a 121 checkout to move 5-3 and move clear for the first time.
Wade hit back with a 180 which he followed with a 125 finish to break back in the ninth, and opened the next with back-to-back 180s, recovering from missing a potential nine-darter to take the leg in 11 darts. The pair traded double eight finishes in the next two as they remained locked at six-all, but van Barneveld looked set to be punished for five misses in the next - only for Wade to miss a dart at double 13 as the Dutchman hit double two to secure a point. Wade, though, opened the deciding leg with three ton-plus scores, and added a fourth by taking out 138 on double 12 to sensationally grab a draw.

"I needed to get a win tonight and although a draw isn't too bad it feels like a defeat for me," said Wade, who is now unbeaten in four games. "Raymond hung in there well but he didn't play his best and although I played okay I was frustrated because I was close to playing brilliantly."

Van Barneveld said: "I can't complain with a draw. I could have lost but James missed some doubles earlier on and maybe I'm lucky to get a point. I had some good finishes but James came back well and put me under pressure, and the 138 was brilliant. It showed he's a world-class player." 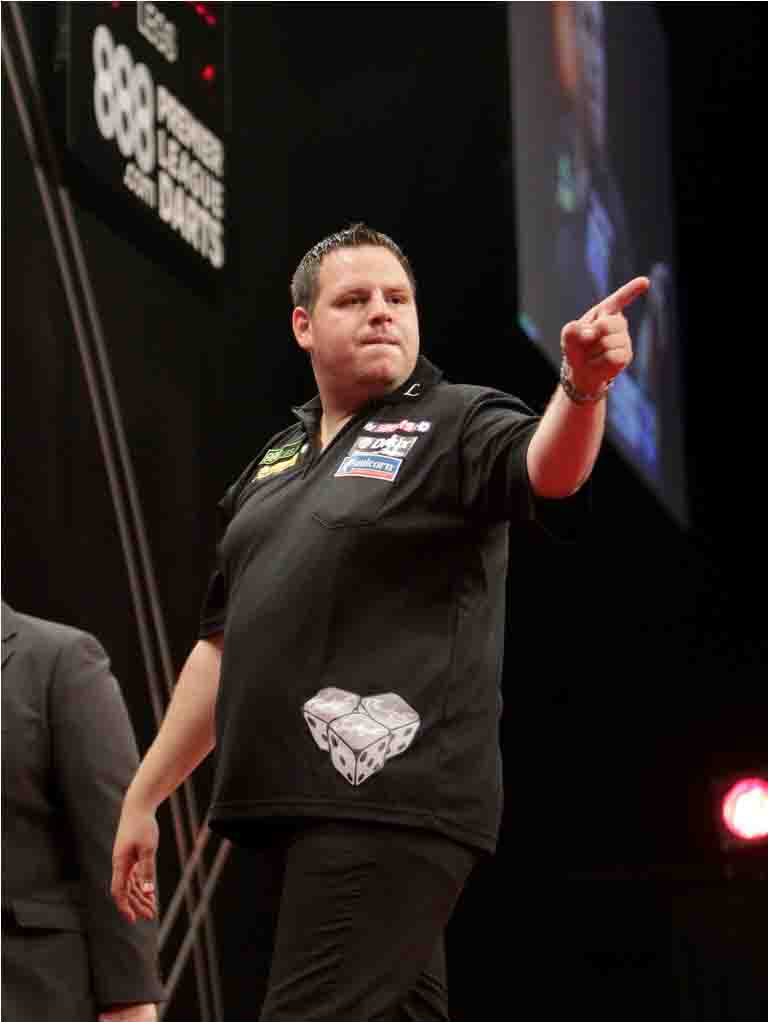 Weltmeister Adrian Lewis picked up a crucial 8-5 win over Simon Whitlock to get his 888.com Premier League Darts Play-Off challenge back on track at the Echo Arena in Liverpool.
Lewis had lost his previous three games in slipping to sixth in the table, but moved into fourth place with two league nights remaining.
Whitlock now sits a point behind Lewis and Wade, as he paid the price for misses in the middle of the game as the Stoke ace pulled clear by winning four of the final five legs.

The pair made a high-quality opening to the match, with Lewis landing a 180 and a showpiece 100 finish of single 20 and two double tops to take the opening leg, before Whitlock posted a maximum and a 90 checkout in reply. The Australian, though, missed three darts to break in the third as Lewis hit double top to edge in front and then finished 87 and 91 to win the next two legs and open up a 4-1 lead. Whitlock hit back with three successive legs of his own, landing two 180s and finishes of 78 and 80 before edging a nervy eighth to level, with Lewis wasting his chance to punish earlier misses before the Australian finally hit double ten.
Whitlock, though, missed two darts at double top to lead in the ninth, as Lewis hit the same bed to make him pay before landing a 180 and double ten to break in 14 darts for a 6-4 lead. The World Champion then fired in two timely maximums in another 14-dart finish to lead 7-4 and ensure a minimum of a point from the contest. Whitlock finished 91 to take the next, but any hopes of a fightback were ended when Lewis took out 106 to ensure the points.

"It could be the biggest win of the tournament for me," admitted Lewis. "I knew it was going to be a tough game because me and Simon were both fighting for fourth place and if I'd lost then it would have been 'game over' for the play-offs but I dug in and got the job done. I got off to a good start but he started knocking in a few 180s. When I felt under pressure I hit the 180s and I think I will qualify now. It's a tough run-in but that's the same for everyone but I'll be fighting and I think I can finish fourth. I've got Terry Jenkins next week and Gary Anderson on the final week, but James and Simon have to play Phil Taylor, and I can't see them getting anything out of that so I've got the best chance out of the three of us."