James Wade's late surge towards the 888.com Premier League Darts play-offs continued with his best performance of 2011 as he powered past Mark Webster at the NIA in Birmingham.
The 2009 champion had lost six of the opening eight games of this year's Premier League season and sat at the foot of the league table at the half-way stage.
However, he claimed a third successive victory by powering past Webster in style, claiming a 6-0 lead before going on to complete a heavy win with an average of 106.26.

Wade made a sensational start by hitting finishes of 120 and 110 to lead 2-0, and wired double 18 for a 116 checkout in the third before posting double nine to move three legs clear. Webster gained his first sight at a double in the fourth leg, but missed the bullseye for a 164 finish before Wade followed an earlier 180 with double top. Webster hit a 180 in reply in the fifth, but Wade denied him a chance to get off the mark by posted double five with his third dart for a 5-0 lead.
Wade then finished the maximum checkout of 170 in the sixth, entering the break with a 106 average as he headed towards victory. Webster returned with a 180 and landed double ten to get off the mark in the seventh, although Wade posted double eight in the next to lead 7-1.
The Welshman fought to stay in the game in the next, but Wade was first to a finish and took out 87 in two darts to seal a fine victory.

"Although I'm delighted with how I played I didn't like beating Mark 8-1," said Wade. "He's having a bad time at the moment and I know it's hurting him. The results are starting to come at the moment and even though I had a slow start to the season it's not too late for me to make my mark in this competition." 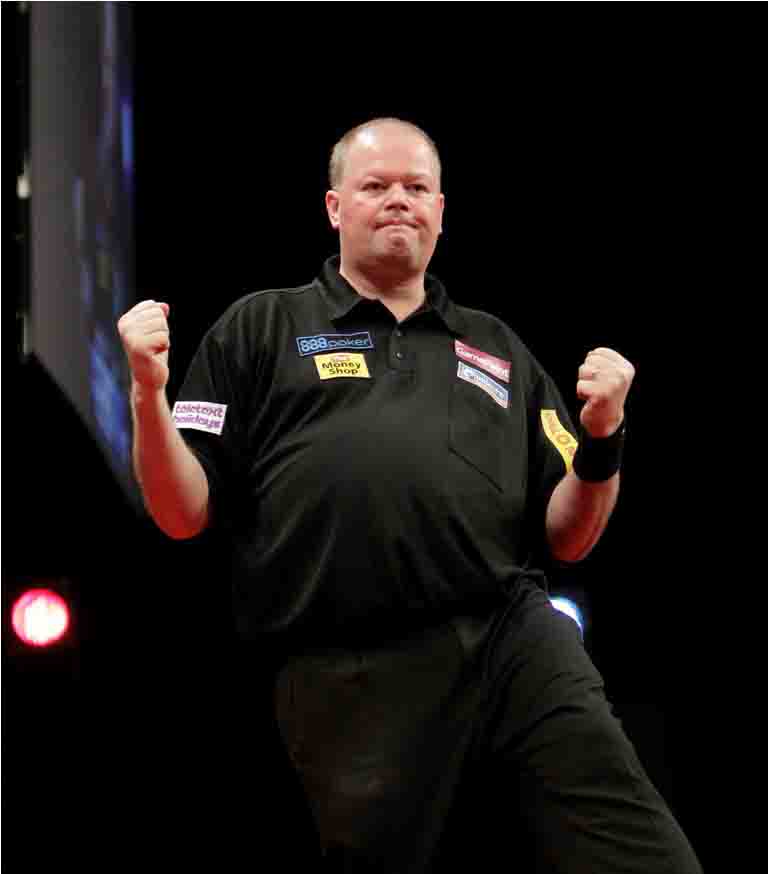 Terry Jenkins snatched a draw with Raymond van Barneveld with a 12-dart finish in the deciding leg of their 888.com Premier League Darts clash at Birmingham's NIA on Thursday night.
The pair have often shared classic matches in the Premier League, and this contest proved no different as the points were shared.
Van Barneveld held leads of 3-1 and 5-3 before being pulled level, but led 7-6 only for Jenkins to produce a brilliant deciding leg.

The pair shared the opening two legs on double ten before van Barneveld broke for the first time in the match, hitting a 180 and double 18 for an 11-dart leg. He finished double ten to lead 3-1 before the pair shared 14-dart finishes in the next two, but a fine seventh leg saw Jenkins post a 180 to set up a 105 checkout in reducing the gap to one leg at 4-3.
Jenkins also hit a maximum in the next, but van Barneveld finished 76 in two darts to deny him a shot a double, although the Ledbury ace took out double ten to win the ninth and fired in an 11-darter to level. Jenkins then gave himself a chance to edge in front in a tense 11th leg, but missed double 19 for a 155 finish as van Barneveld took out 106 to break for a 6-5 lead
The Dutchman, though, missed four darts to earn a point in the next Jenkins hit double 16 to level once more, but van Barneveld was first to a double in the 13th to ensure at least a draw at 7-6. Van Barneveld had the throw in the decider, but the pair traded maximums and the five-time World Champion left 40 to take victory only for Jenkins to finish 83 on the bullseye for a brilliant 12-darter in sntaching a point.

"I thought I could have won the game but I was trying too hard in the first few legs and I was throwing too fast," said Jenkins. "I slowed down after that and took my time, and I think I'm pretty unlucky not to win in the end. But a draw is another point for me and if I can beat Mark Webster next week the play-offs may not be out of reach, but it's going to be an uphill battle."

Van Barneveld said: "I know what Terry can do and he always pulls his best out against me. He beat me in London and got a point now but it could have been different if I had not hit some of my finishes. In the end maybe I am happy with the draw. I have to play well in the last three weeks to make sure I finish in the top four."

Gary Anderson smashed the 888.com Premier League Darts record for 180s by hitting 11 in a thrilling 8-6 win over Simon Whitlock at the NIA in Birmingham.
The Scot's heavy scoring power saw him power past Phil Taylor's previous record of ten 180s set in last year's final, as he landed 11 in a 14-leg classic.
Whitlock played his part, pushing Anderson all the way to a deciding leg before the Scot revailed for victory with an 11-dart leg.

Anderson opened the match with a 180 and hit a second maximum in breaking throw to win the opening leg, in a taste of what was to follow. Whitlock hit a 174 in setting up 16 to win the second after Anderson endured double trouble, and finished double top to take the third. He also hit a 180 in the fourth, but Anderson finished a 13-dart leg to level, broke on double top in a nervy fifth leg which saw the pair trade maximums and then land another 180 in a second 13-dart finish in moving 4-2 up.
Whitlock won his first leg in four to hit back with a two-dart 70 finish, but Anderson edged 5-3 up with a 104 checkout. The Australian responded with a brilliant 11-darter to take leg nine, hitting his third 180 of the game in the process, only for Anderson to respond with two maximums in the tenth as he moved 6-4 ahead. Anderson also landed a 180 in the next, but Whitlock took out double eight to reduce the gap to one leg once more.
He then gave himself a chance to level with a maximum in the 12th, but wasted the opportunity as Anderson posted double three to ensure he would at least draw leading 7-5. Anderson then hit back-to-back maximums to open the 13th leg and set up a potential nine-darter, but after hitting a seventh treble 20 he missed the treble 19 - and went on to miss six match darts as Whitlock landed double six to force a deciding leg. Anderson, with the benefit of throwing first, opened with his record-breaking 11th maximum to ensure that Whitlock's 180 in reply would only be in vain, as the Scot took out double top for an 11-dart winning leg.

"The scoring was brilliant but my doubles were poor," said Anderson. "When I had the chance at the nine-darter and then lost the leg it didn't surprise me but getting the win was the main thing. I should have been 6-0 up but I missed so many doubles and it was my own fault it went to the last leg. I'll take it scraping a win and it's another two points towards the play-offs now, so I'm pleased with that and I can't wait to play Phil Taylor next week."

Phil Taylor celebrated his 100th appearance in the 888.com Premier League Darts with a superb 8-3 win over Adrian Lewis at the NIA in Birmingham, avenging his defeat to the World Champion on the opening night of the season.
Taylor had suffered his heaviest ever Premier League Darts defeat when he went down 8-2 to Lewis at The O2 in London in February, but extended his winning run to ten matches since with a thrilling display.
He hit six 180s and two ton-plus finishes in averaging over 107 to see off Lewis, who averaged almost 101 in reply but was left with few chances against the Stoke great.

Lewis did have a chance to break throw in the game's opening leg, but missed double 18 as Taylor followed an earlier maximum by finishing 68 on double top. Taylor then took out 139 to win the second leg and double 14 in the third, with Lewis waiting on a double in both legs. The World Champion get off the mark in the fourth leg with a brilliant 11-darter, despite Taylor hitting two 180s to leave 83 after nine darts, but could only watch on as the world number one took the fifth in 14 darts, aided by his fifth maximum of the game.
Lewis landed his first 180 in the sixth leg, replying with a 14-dart finish of his own to reduce the gap to 4-2, only for Taylor to pull clear in the second half of the game. Lewis hit another maximum in the seventh leg, but Taylor posted tops for the leg and punished three misses from the youngster to take the next for a 6-2 lead.
That was extended further with a brilliant ten-dart finish, the best of the Premier League season to date, as Taylor posted scores of 180, 137 and 134 before cheekily finishing the bullseye in one dart. Lewis hit double top in the next to stay in the game, but any hopes of a revival were ended as Taylor completed victory in style with a 130 checkout. 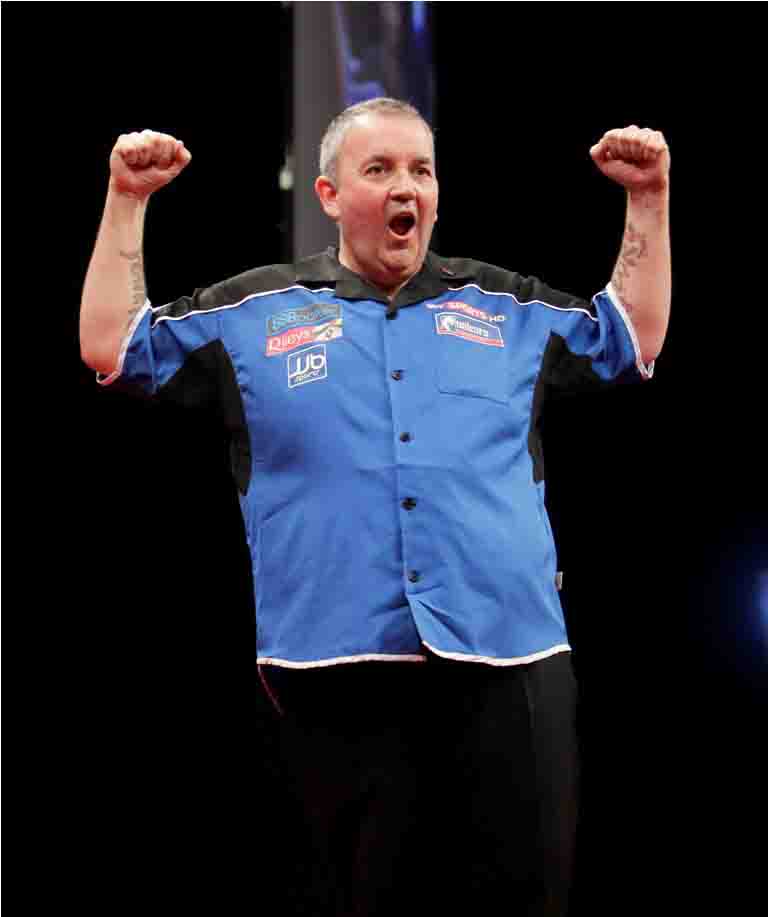 "It was a great game and I'm happy to have got revenge over Adrian," said Taylor. "It was important to win tonight even though I'm in the play-offs because it keeps the other players on their toes, and I won't be taking my foot off the pedal. Adrian's a gutsy player and showed that he's a worthy World Champion by trying his hardest with every shot, and he's very good - but tonight I was better!"

Lewis admitted: "Phil didn't miss a thing and played brilliantly. At 4-1 down I was averaging 119 but Phil took out 139 when I was on a double and another good finish when I was on a double. For the majority of the match I played well and I know how it feels now to have 180s piled in against me early on - it's what I normally do to other players! Some of the other results went for me tonight but I've got to play Simon Whitlock next week and that's a massive match for me now if I'm going to make the play-offs."