James Wade late surge to claim an 888.com Premier League Darts play-off spot continued with an 8-5 win over Simon Whitlock at Sheffield's Motorpoint Arena.
The 2009 champion, who lost four of his opening five games, claimed a second successive victory by punishing an uncharacteristically sloppy display of finishing from Whitlock.

The Australian opened the match with a brilliant 170 finish, guaranteeing a £1,000 high finish bonus, but missed 20 darts at a double during the remainder of the game as Wade took full advantage. The left-hander responded to Whitlock's opening salvo with a 180 and an 80 finish to win the second leg and level, and finished 85 on the bull to win the third and edge ahead. A 112 finish from Wade gave him a 3-1 cushion, but he paid in the next after following up a 180 by missing three darts at double top, with Whitlock stepping in on double 12. The Australian, though, missed a dart at double 16 in the next as Wade followed another maximum with double ten for a 4-2 cushion.
Whitlock won the seventh on double eight, but wasted a golden chance to level in the next, hitting a 180 but then missing five darts to square the match as double ten saved Wade. The left-hander then hit double top for a 6-3 lead, before Whitlock hit back to win the next two and reduce the gap once more to one leg.
However, he saw four darts to win the 12th leg go begging as Wade again landed double ten with his third dart, ensuring at least a draw at 7-5. After Wade wired double 12 for a 141 checkout to win the match in the next, Whitlock gave himself a chance to stay alive but missed double top, and double six saw the left-hander claim victory.

"I gave myself a mountain to climb where the play-offs are concerned, but you can never say never and I wouldn't write me off," said Wade. "With how I played for the first five or six legs I should have gone on and wrapped the win up more easily, but I got frustrated and maybe I was a bit lucky that Simon missed so many doubles. I know I'm so much better than this but I'm not performing as well as I can. I'm trying so hard and it's disappointing for me but it's a win and I've still got a chance."

Gary Anderson won a third successive game in the 888.com Premier League Darts, with an 8-1 defeat of Mark Webster putting him a step closer to the play-offs next month.
The Scot piled on the misery by completing two 8-1 wins against the left-hander, who has now lost his last three games by that scoreline and sits bottom of the league table. Webster missed a total of 19 darts at a double in the game, which ultimately denied him the chance to hit back after finding himself 3-0 down early on.
Anderson made a brilliant start by finishing 136 to win the opening leg, and took out double 16 and double ten to win the next two in breaking throw twice to win the first three legs. He also missed a dart at tops to take the fourth, when needing a 114 finish, as Webster hit the same bed to get off the mark. However, the Welshman missed eight darts to win the fifth and cut the gap to one leg, with Anderson posting double two for a 4-1 lead and tops in the next to win his fifth leg.
Webster also missed eight darts to win the seventh leg, as Anderson moved 6-1 on double one, piling on the misery for the Welshman after they both found themselves on the board's smallest finish. Anderson hit double ten in the next to move a leg away from the win, and posted a 13-dart finish to complete a heavy victory.

"I'll take the two points but I don't want to scrape into the play-offs, I want to win every game," said Anderson. "There's still four weeks to go and it could turn around if I don't keep going. It's hard playing Mark because we're close friends and I felt I played really well when I beat him 8-1 last time, but this time he missed doubles. On the practice board he's phenomenal but he's struggling when he gets on stage. The Premier League's still new to me and Mark but I'm getting used to it, and being in the top four is all that matters - this is another step closer to that." 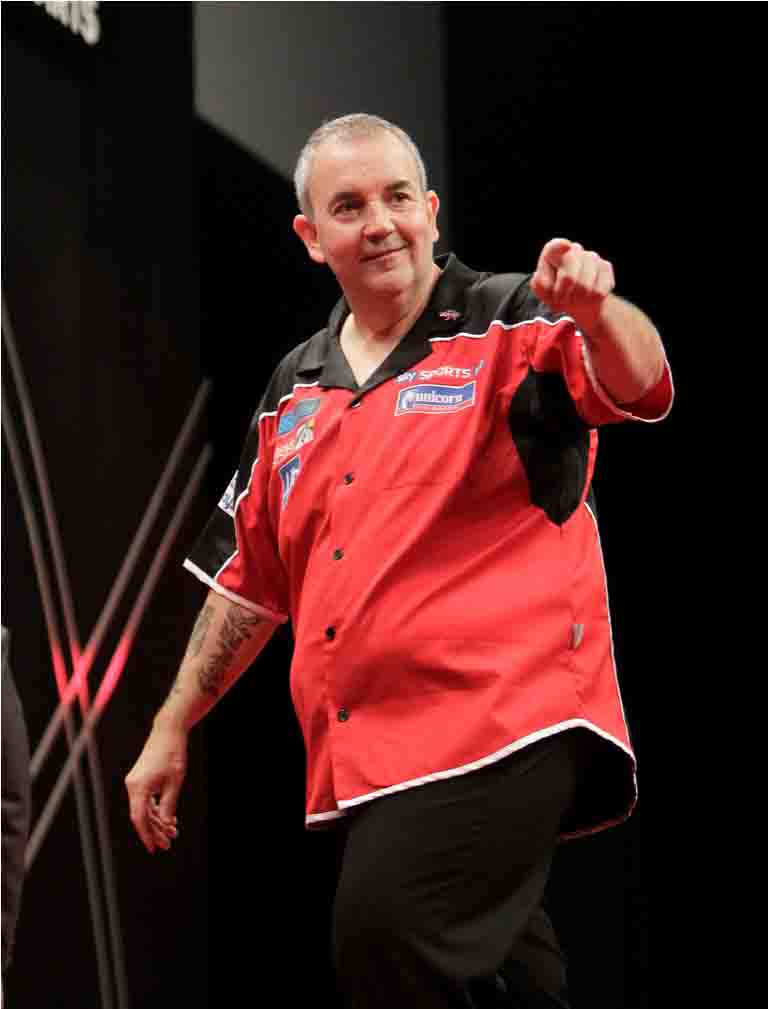 Phil Taylor booked his place in the 888.com Premier League Darts play-offs with an 8-2 defeat of Terry Jenkins at Sheffield's Motorpoint Arena on Thursday.
The reigning Premier League Darts champion completed a ninth straight victory since his opening-day defeat to Adrian Lewis with a stylish display - and warned the World Champion that he is out for revenge when they meet in Birmingham next week.
Taylor won six straight legs to open the clash with Jenkins, including a 130 finish, and went on to average over 106 in completing a heavy win as he ensured a place in May's play-offs.

"I'm very pleased to have made sure I'm in the play-offs because that's everyone's goal at the start of the season, but I want to have a big push now and make sure I finish top of the table," said Taylor. "That starts next week and it will be a special game against Adrian. I'll be going all-out to beat him and I can't wait."

Taylor began superbly, breaking throw in the opening leg on double top and doubling his lead before a 130 finish moved him 3-0 up with a 12-darter, after Jenkins had missed the bull for a 170 checkout. Taylor then landed a 180 to kick off the fourth leg, which was won on double eight, and landed double seven to lead 5-0. Jenkins posted a maximum of his own in the next, but Taylor landed double ten to lead by six legs at the break.
Jenkins finally got off the mark in the seventh, posting a 14-dart finish by taking out 61, and after Taylor hit a 180 in moving 7-1 up the Ledbury ace hit another maximum and tops to take a second leg. However, any feint hopes of fighting back were quickly ended by Taylor, who landed his third 180 and finished 63 to complete a heavy win.

"I'm pleased with the win but I felt for Terry because his confidence is low and his head keeps dropping," added Taylor. "My foot came off the gas a little bit towards the end but I had to complete the job." 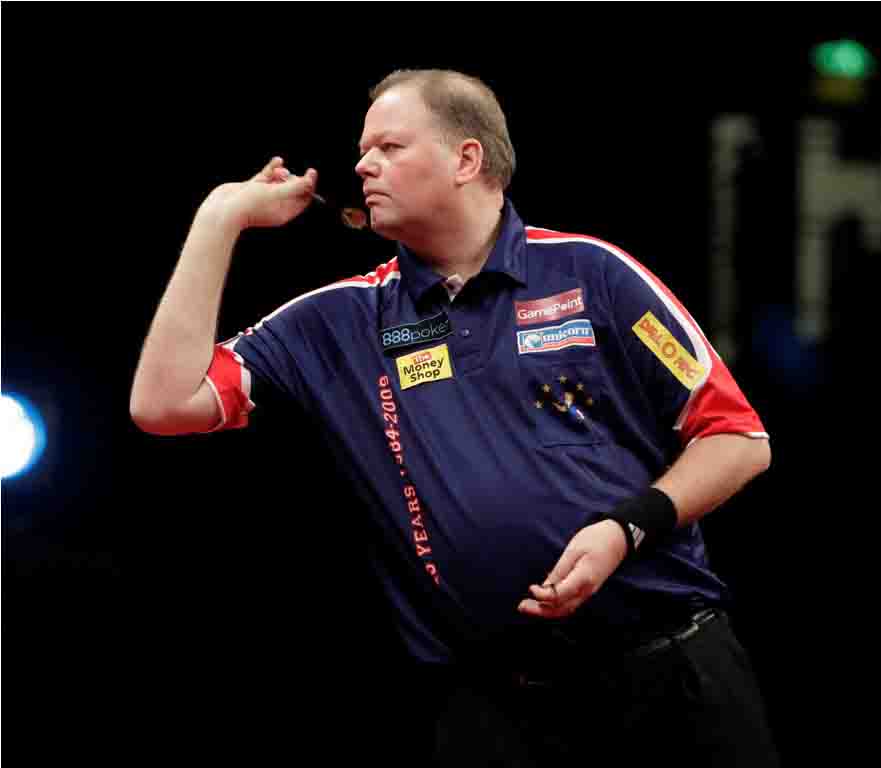 Raymond van Barneveld completed an 888.com Premier League Darts double over World Champion Adrian Lewis with an 8-3 victory when they met at the Motorpoint Arena in Sheffield on Thursday.
The Dutchman, who averaged 104 in defeat to Simon Whitlock a week ago in Aberdeen, claimed his sixth victory of the campaign with the triumph.
He also moves three points clear of fifth-placed Lewis as the battle for top four places continues, with four league nights remaining before the play-offs next month.
Van Barneveld took the first two legs in a scrappy opening, finishing double eight in the first and 90 on the bullseye in the second before Lewis got off the mark on double five. The youngster then produced a superb 136 to win the fourth and level the contest, only for van Barneveld to hit back in style.
He hit a 180 in a 14-darter to take the fifth, broke throw on double seven in the next and then finished 156 to lead 5-2. Lewis posted a 180, his first of the match, in winning the eighth on double eight, but missed his chance to steal the next before van Barneveld scrambled home double one to lead 6-3. A confident double 18 gave the Dutchman a seventh leg, and he then converted a 70 checkout to seal the points.

"To beat the World Champion twice in the Premier League is great for me," said van Barneveld. "I said last week after averaging 104 and losing that it would be better to hit a lower average and win, which I've done this week. I'm three points clear of Adrian now but every week will be like a final for me and I've got to keep winning. I'm still hoping to get into the top four and if I can beat Terry next week it will keep me on target."