Mark Webster celebrated his 888.com Premier League Darts debut in style with an 8-3 win over 2009 champion James Wade at London's O2 Arena on Thursday.
The Welshman delighted the 10,000 strong capital crowd with a scintillating display, which he began with the first of four 180s on his opening visit to the oche before winning five successive legs en route to victory.

With both players having kicked off the contest with maximums, Webster took the opening leg in 11 darts with a 100 finish. Wade levelled following a scrappy second leg, which featured his second 180 of the game, before then breaking for a 2-1 lead on double ten, following three misses from Webster.
Webster broke back after Wade wasted five darts to take the fourth leg, and a 180 from the Welshman helped set up double top for a 13-darter as he moved back ahead. Wade replied in kind with a maximum and tops, but Webster returned from the break to string together a brilliant run of legs as he pulled clear from three-all to take victory.
He hit another 180 in a second 13-dart finish of the game and took out 91 for an 11-darter, before a 101 finish put him into a 6-3 lead. Tops for a third break of throw in the match saw him ensure at least a point, but he wrapped up the win in style with another 180 and double six.

"It's a perfect start for me," said Webster. "You don't want to lose your opening game and it's great to have won and won so well. "I'm happy with how I scored and to hit half my doubles was good for me." 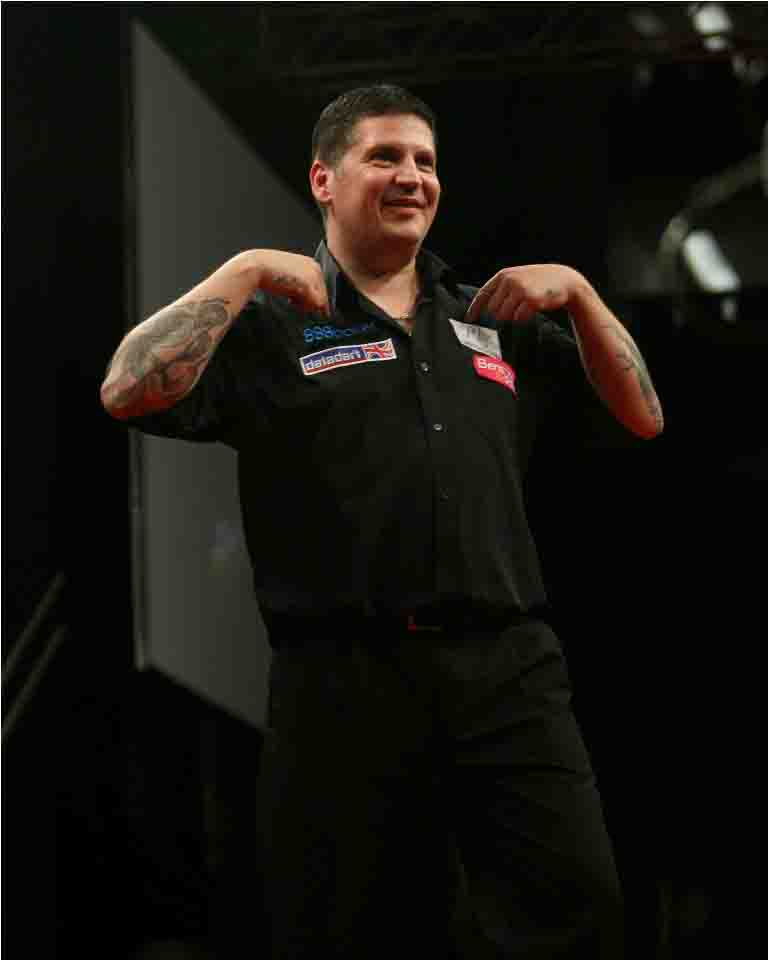 Gary Anderson enjoyed a winning debut in the 888.com Premier League Darts, defeating Simon Whitlock 8-5 at The O2.
The pair shared 11 180s in an entertaining opener in London, with one break of throw from Anderson and a ten-darter proving crucial in the final outcome as the Scot picked up the two points.

He had hit his first 180 of the game in winning the first leg in 12 darts, before the Australian posted a 180 one his way to the second. Whitlock opened the third with another maximum in reply to a perfect start from the World Championship finalist, who took the leg in 13 darts.
Whitlock won the fourth, and the high scoring continued as Anderson hit a 180 in another 12-dart leg to lead 3-2 and the the duo again traded maximums as the Australian squared the contest going into the break. Anderson won leg seven on double ten after Whitlock followed a maximum with two missed darts at tops to break, and the Scot then picked up the first break of the game on double top.
He then hit a sixth 180 of the game in a superb ten-dart finish as he pulled clear at 6-3, ensuring that finishes of 13 and 14 darts in two of the next three legs from Whitlock only pulled him back to 7-5. Double 15 in the middle of those legs had ensured Anderson would at least draw on his Premier League debut, but he sealed both points with a classy 120 finish.

"I saw Mark Webster go up on stage first and he played brilliantly to say it was his first Premier League game and I wanted to go on stage and do the same," said Anderson. "I was nervous at the start and settled down after the first leg. It's good to get the first match out of the way and I feel I've got a lot of improvement in me yet."

Terry Jenkins battled back from 6-4 down to claim victory against Raymond van Barneveld in their 888.com Premier League Darts opener.
Dutch ace van Barneveld, who missed out on the play-offs for the first time last season since he joined the PDC in 2006, seemed set to make an ideal start to this year's campaign when he won five out of six legs in mid-game to edge towards victory.
However, Jenkins hit three 180s in clawing his way back ahead before closing out the victory.

After van Barneveld took the game's opening leg, Jenkins replied with a 12-darter to level and a 180 in breaking before double ten won him a third successive leg to move 3-1 up. Van Barneveld replied with his first maximum of the game in a 14-darter before breaking throw with a 76 finish. A brace of double 16 finishes pushed the Dutchman 5-3 up, before Jenkins matched a 13-darter from van Barneveld by hitting double top to stop the run in the ninth leg.
Jenkins, though, missed the bull for a 170 finish in the next, and then wasted seven darts at double four as van Barneveld edged home double eight to lead 6-4. However, he then missed two darts to reach seven legs and ensure a point in the next, as Jenkins broke on double four.
A 13-darter saw him level, before he hit a 180 in a third straight leg before a 76 checkout moved him 7-6 up. Van Barneveld battled to grab a point in the decider, but missed a dart at double 18 for a 113 finish and Jenkins capitalised on tops for the win.

"I'm happy with the win but not happy with the way I played," said Jenkins. "In practice I was whacking everything but didn't happen when I got on stage. Ray struggled a bit and we both followed each other, so it's good to scrape a win out of it. I've played well in the Grand Slam and the World Championship and it's disappointing I didn't play as well as that in this game." 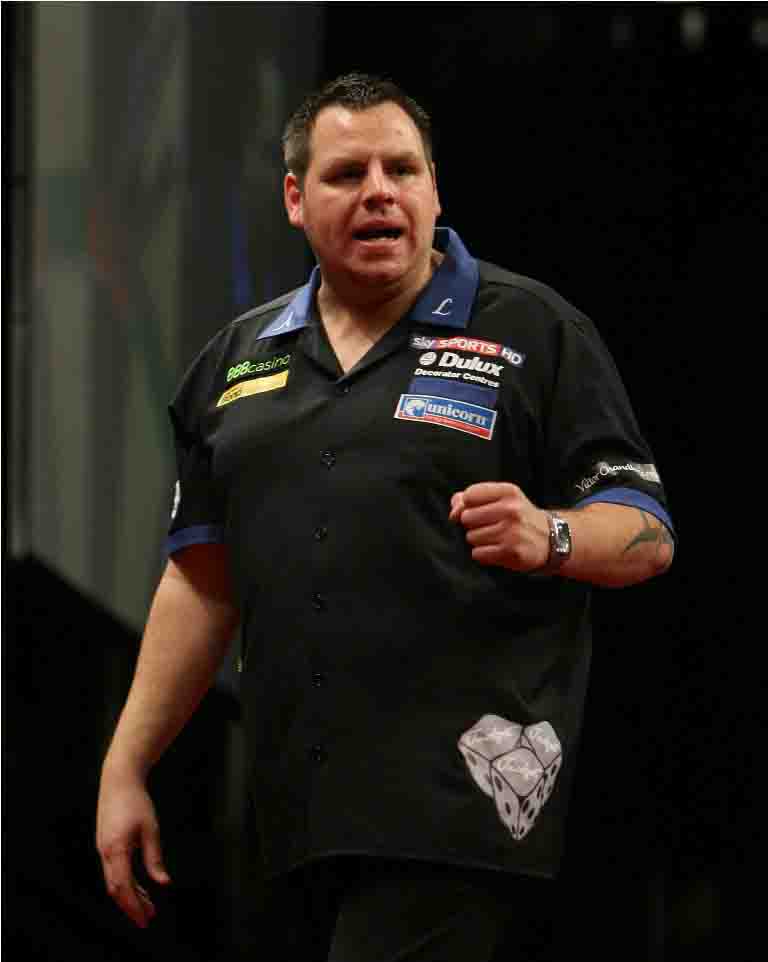 Reigning Champion Phil Taylor suffered his heaviest ever defeat in the 888.com Premier League Darts as World Champion Adrian Lewis powered to an 8-2 victory in their opener at The O2 in London.
Taylor had hit two nine-darters in winning last year's title and had seemed to have returned to form following a disappointing end to 2010 when he won last weekend's Players Championship Finals.
However, he was left trailing by a brilliant Lewis performance, as the Stoke ace won the final six legs without reply and averaged 100.79 in a fine win.

The defeat for Taylor was heavier than his 8-3 loss to Peter Manley in 2008, and the 15-time World Champion admitted afterwards: "I was awful and I've got to work hard to put it right because I don't want to keep playing like this. "I know what I've got to do and it's up to me to put it right and sort myself out."

Taylor had begun well, winning the first leg with a 76 finish after Lewis opened with a 180 but wasted five darts to take the lead. The World Champion, though, hit back in style with legs of 13 and 14 darts to move 2-1 up, before a fine 13-darter from Taylor gave him the fourth in levelling. Taylor, though, paid a heavy price for missing his chance to break in the next as Lewis took out double top to lead 3-2 and then finished an 11-darter with a showpiece bullseye, double top checkout of 90. 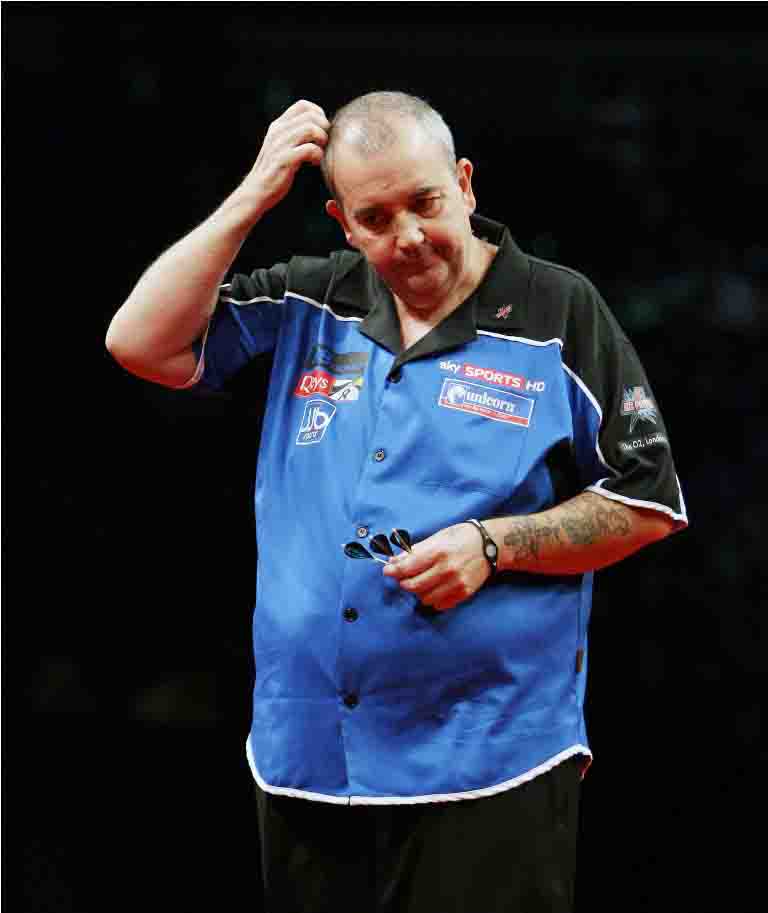 He returned from the break to win the next two as he took his 180 tally to four in the game, before adding another maximum and double ten in leading 7-2. Taylor fought to keep the match alive, but Lewis wrapped up a high-quality win with his sixth 180 and double eight for a 13-dart leg to make the ideal start to the season.

"Phil's done everything in the game and if I can beat the best player in the world 8-2 then I'll be confident I can beat anybody," said Lewis. "I was pretty focused and I did a good job, but I can't get carried away because there are 14 weeks and I've got to try and stay consistent. Phil was under the weather and I know he'll improve as the Premier League continues, and hopefully I will too."