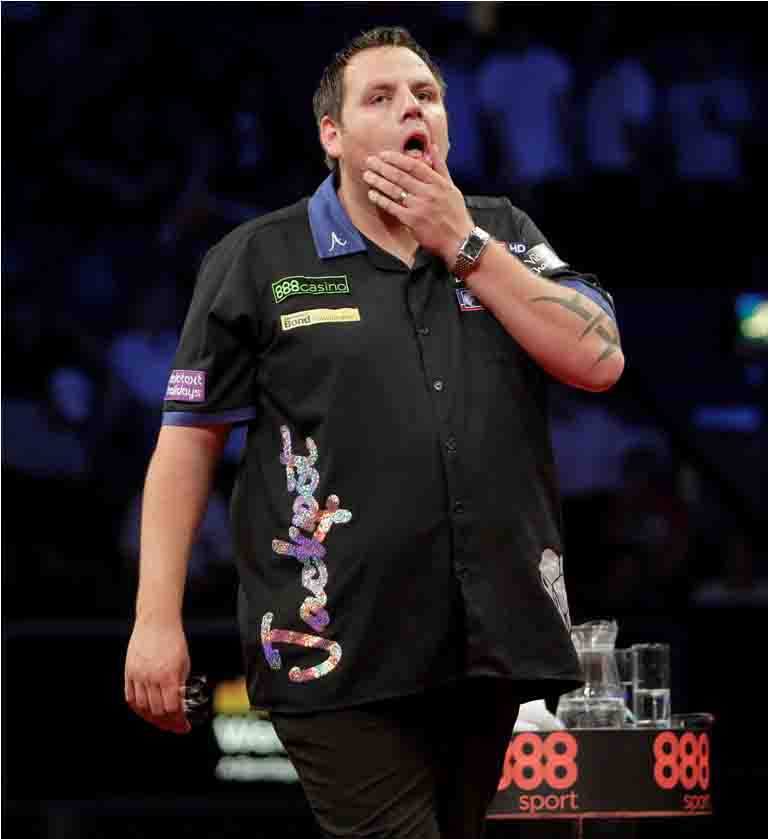 Adrian Lewis ended Phil Taylor's reign as 888.com Premier League Darts champion with a thrilling 8-3 semi-final victory at the Wembley Arena.
Lewis won through to his first Premier League final with a superb display, as he remains on course to add the £125,000 title to the World Championship crown he picked up in January.
The Stoke youngster led 3-0 before Taylor cut the gap to one leg - but the 15-time World Champion crucially missed two darts to level before Lewis pulled away in the second half.

Taylor had begun the mind games before the match commenced by winning the bullseye but handing Lewis the throw - a tactic which proved costly when he missed a dart to break in the opening leg, as Lewis posted tops to follow an earlier 180 to lead. Lewis then took the game's first break in the second leg, on double top for a 14-darter, and hit a 180 and double five to lead 3-0. Taylor kicked off the fourth with a maximum and landed double ten to get off the mark, before finishing 96 to break back in the next and reduce the gap to 3-2.
However, he saw two darts at double ten, for a 77 finish, miss their target to level the game in the sixth leg as Lewis posted double top to enter the break two legs clear. He came back to post double top for a 5-2 lead, and punished a missed double 13 from Taylor to break again on double 15 in the eighth leg. Lewis then hit back-to-back 180s in kicking off the ninth leg to set up a possible nine-dart finish - at the venue where Taylor landed two perfect legs a year ago.
He hit a seventh treble 20, but missed the treble 19 before finishing double 16 for a ten-dart leg which put him one away from a sensational victory. Lewis added his fifth maximum of the game in the next leg, but Taylor hit double 13 for a 14-darter to keep the match alive, only to see the World Champion land another 180 and double 18 to seal victory in 13 darts.

"I'm delighted but I've not finished the job yet," said Lewis. "I haven't won the title yet and I'm looking forward to the final now. I took an early lead but Phil came back well, and the two darts he missed at double ten to level the game were very important. I came out firing after the break, knocked in a few 180s and finished well."

Taylor admitted: "I'm really frustrated, especially after the league I've just had with winning 13 on the trot. The first dart just kept landing on the wire and I simply never got it right throughout the match. "Upstairs in practice I was brilliant and I hit about 45 180s in practice, but that's not downstairs on stage and I'm very disappointed with my performance. "My preparation wasn't right and I feel like I've got a lot to prove. I've got to knuckle down, as I normally do, and put things right over the next few months. I'll get ready now for the UK Open, prepare for Blackpool for the World Matchplay and the World Championship. Adrian's my target now, my inspiration to put it right."

Gary Anderson condemned Raymond van Barneveld to semi-final heartbreak in the 888.com Premier League Darts for a fifth time with an 8-6 victory as he set up a repeat of January's World Championship final with Adrian Lewis.
Van Barneveld had lost in four semi-finals from 2006-2009, but finished second in the league table after the 14 weekly rounds as he raised hopes of finally reaching the decider. But he missed out in cruel fashion as Anderson overturned a 4-1 deficit by winning seven of the next nine legs to move into the final.

Van Barneveld took out 71 to win the game's opening leg, and edged a scrappy second on double one before finishing double 17 to take a 3-0 lead. Anderson hit two 180s in a brilliant 11-darter to get off the mark in the fourth, but van Barneveld landed a maximum of his own in a 13-dart leg as he moved 4-1 up. However, the Dutchman crucially missed a dart at double 16 to take a four-leg lead at the break, with Anderson finishing a key double eight.
The Scot then traded 180s with van Barneveld in a 13-darter to break in the seventh leg, levelled on double ten and punished a further miss from van Barneveld as the Dutchman suffered double trouble for a third successive leg to move ahead 5-4. Anderson missed double 12 for the tenth as van Barneveld levelled with a neat 72 finish for a 14-darter, but Anderson broke back to win the next with an 11-darter.
Van Barneveld hit a superb 137 checkout to square the game at six-all and leave the game poised as a best-of-three leg shoot-out. It was Anderson, though, who found another gear to hit two 180s in a 12-darter to lead 7-6, before posting double 18 at the first time of asking to secure the win.

"It means a lot to me to have reached the final in my first Premier League Darts season," said Anderson. "We both missed a few doubles and I missed too many, which I need to tighten up on. I'll get on with the final and I want it to be a good game against Adrian, regardless of the outcome."

Van Barneveld said: "I'm so disappointed. From the first dart I didn't feel right on stage and my best game didn't come out. Maybe the travelling from Holland to the UK for the last three months caught up with me, but I gave it my all." 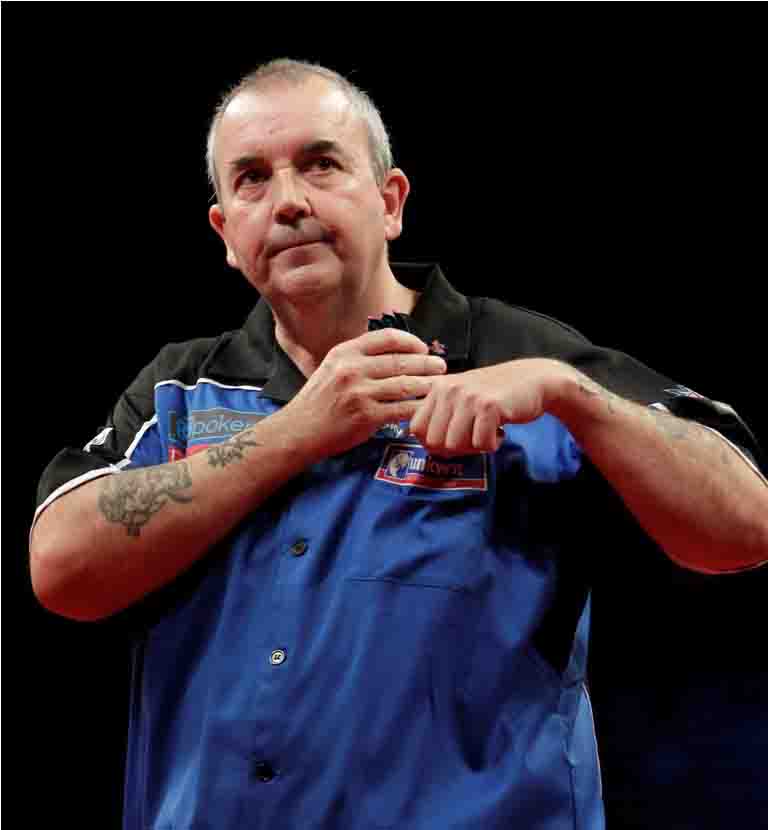 Phil Taylor claimed third place in the 888.com Premier League Darts with an 8-6 win over Raymond van Barneveld at the Wembley Arena.
The pair overcame their semi-final disappointment in the tournament to return for the Third-Place Play-Off, as Taylor took home the 50,000 pound prize to leave his Dutch opponent with a 40,000 pound cheque.

As in his semi-final, van Barneveld made the early running to lead 3-1, with Taylor's only reply being a 100 finish. Taylor hit two 180s in winning the fifth leg in 13 darts, and although van Barneveld posted double nine for a 4-2 lead the world number one replied with legs of 13 and 14 darts to level the game.
Van Barneveld hit his third 180 of the game to win the ninth leg, and finished 88 in two darts for a 14-darter to lead 6-4. Taylor, though, broke to win the next on tops, edged a scrappy 12th leg to level and then hit tops for a 7-6 lead as his opponent twice missed chances to win legs.
The pair traded 180s in the next leg, but it was Taylor who was first to a finish and he took out 81 for the third placed finish. 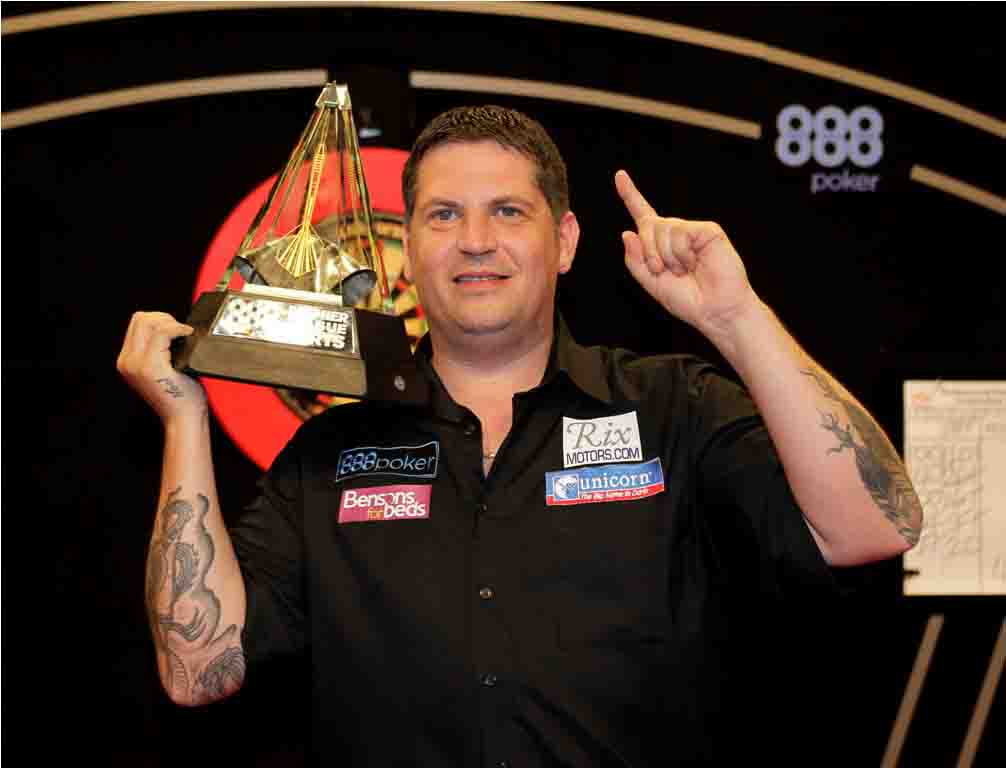 Gary Anderson claimed his first televised PDC title with a glorious 10-4 victory over Adrian Lewis in the 888.com Premier League Darts, as Phil Taylor and Raymond van Barneveld suffered Wembley heartbreak.
Anderson followed up an 8-6 semi-final victory over van Barneveld with a sensational display in the decider, taking leads of 4-0 and 9-1 before walking off with the 125,000 pound first prize.
Lewis had won through to his first Premier League final with a stunning 8-3 defeat of reigning champion Phil Taylor in the semis, but failed to recapture the form as Anderson prevailed.
As Lewis struggled to find his range in the opening legs of the final, Anderson made a brilliant start by breaking throw with a 13-darter in the opening leg, finishing 121 on the bull for the second and hitting a part of 14-dart legs in moving 4-0 up. Lewis hit back with double eight in the fifth, but Anderson took out a 101 finish in the next and then Scot then posted a 13-darter on double top for a 6-1 lead, after his opponent missed the bull for a 164 finish.
Anderson hit a 180 in winning his seventh leg, and then added finishes of double 12 and double four in taking the next two to move to the brink of glory at 9-1.
Lewis took out double six for a 14-darter to win his second leg of the game, and then punished four missed match darts from Anderson to pull back to 9-3. He also won a fourth leg, this time on double two, to increase hopes of an unlikely comeback, but Anderson finally nailed the winning shot with double ten to raise the trophy.

"This is a wonderful feeling," said Anderson. "I came across to the PDC two years ago with nothing, and now I've picked up one of the biggest titles in the game. I've had an amazing three months in the tournament and I'll have a good rest now, but I'm delighted. I was great for the first eight legs but slipped off a little towards the end and for a while I thought the double ten might never come! The trebles went well but my doubles can still be improved on - although I have the trophy and that's all that matters.
It's been a hard 15 weeks and I was pleased to reach the last four, with the players who have been in this tournament, but I pipped Barney and have done Adrian. The semi-final helped me and playing a couple of games on the night suits my game. I don't always practice as much as the other players, but to walk away with the 888.com Premier League Darts title is a proud moment."

Lewis said: "I started too slowly in the final and Gary got off to a good start. I was awful in the final but fair play to him, he did a job. I'm disappointed after beating Phil to go up there and lose it like that, because he was the best player in the tournament. I knew I still had to play Gary or Raymond but I didn't get myself as psyched up as I did for Phil. That's another learning curve for me, and I'll stay confident, prepare for Bolton and try to win the UK Open now. Winning the World Championship and then finishing runner-up in the Premier League is a not a bad start to the year for me, especially with the UK Open and World Matchplay to come."