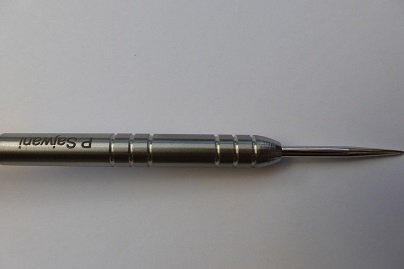 As all other Darts Performance Centre darts the darts are from 90 percent tungsten and you can only get them in the weight Sajwani uses - in 23 g.
The barrel of the dart has an evenly diameter of 6, 45 mm and is 5;1 cm long. Most of the barrel is smooth with the exeption of two groups with three deep grooves , one up front of the barrel and the other in the middle. The point of gravity lies exactly at this middle group of grooves. The gap between the single grooves is around 3 mm and between the two groups of grooves there are 1,1 cm of smooth tungsten. From the middle group of grooves the gap to the rear end of the barrel is 2 cm. The part between the front group and the forefront of the barrel is rough in some kind of microgrip. 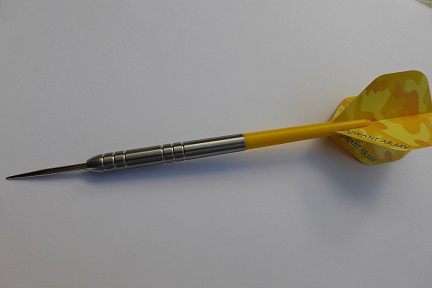 The workmanship of the darts is - as with all darts of the Darts Performance Centre - very good and flawless. All three barrels of the set I was kindly provided hat exactly the same weight - 23 g.

The Peter Sajwani darts are delivered with a set of medium yellow nylon shafts and a set of yellow Sajwani standard flights in a synthetic case. It is the setup Sajwani uses himself. 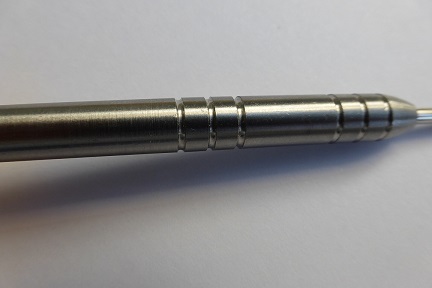 Overall Assessment: The Peter Sajwani Signature Dart of the Darts Performance Centre is a dart highly recommended - flawless workmanship, unproblematic, with really good flight characteristics and a barrel, which is grippy but not aggressive and feels comfortable. 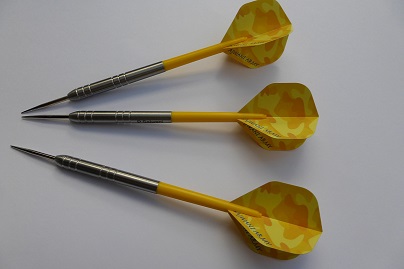