A review of our new Extreme Performance Darts

We sent out some sets of our Extreme Performance Darts to some volunteer testers to get their feedback on them prior to us releasing them for sale. One of our testers is Barry. He has been a fan of our Performance Darts and has been using our Gun Metal darts.

Here is Barry's comprehensive review of the Extreme and he also compares them to his beloved Gun Metals!
If Carlsberg did darts reviews...Thanks Barry, what a brilliant review!


This is my review of the new 23g Extreme Performance darts from the DartsPerformance Centre and a comparison with the Gun Metal Elite darts of which they are a modification. I will be reviewing the 23g version of each, but they also come in 25g. 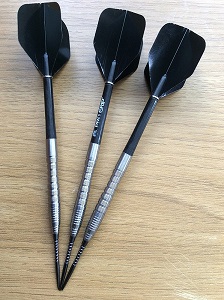 I received the Extreme dart from the DPC to do some initial testing and a review for them so the version I have is an initial version with no DPC branding on the barrel.
They are 90 percent tungsten with the Extreme in plain tungsten and the Gun Metal coming with a gun metal grey finish. They come in a slim-line package with a hard plastic case, point protector, 3 shafts and 3 flights. I have changed out the standard points for 30mm grooved black storm points on each set and added my preferred setup of medium black pro grips shafts and standard black 100 micron V180 flights.

The Extreme dart is very slightly longer than the Gun Metal, but very slightly thinner at the fattest bit and in the scallop:
The barrels were pretty well matched given that both sets have been used and I have changed the points on both sets. My scales are also quite old so that could have an impact on their accuracy!

The balance point of both darts is ever so slightly front of centre, most likely a consequence of the scallop. With my preferred setup the balance point moves back to the middle of the barrel.
My grip with both sets of darts is the same. I grip the Gun Metal on the front taper on that very nice micro grip and I grip the Extreme dart on the new grip section that has been added to the front section of that dart.
The darts land in the board the same and in my usual very flat way. I like this as it allows the placing of darts over as well as under other darts in the board. 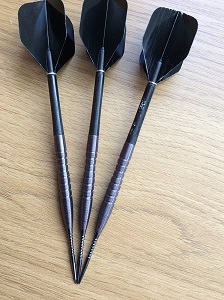 In conclusion I first have to say that I love both darts. The Gun Metal darts have been my dart of choice for the last 18-24 months. My only slight annoyance with them was that because I grip them right on the front taper I find that after 3-4 months the grip is gone and I need a new set, whereas the grip in the scallop is as good as the day they were bought! Therefore, anyone that grips the dart from the middle to the rear you would suggest that three darts would last an extremely long time before the grip would wear.

I have been looking for a dart with a very similar profile to the Gun Metal darts, but with a longer lasting front grip just to give me that peace of mind that the dart isn't going to slip as it gets older. I have tried a few different sets, but none have suited me or felt as good. Therefore, when I received the Extreme darts, to say I was "extreme"-ly excited would be an understatement!!

The grip at the front of these is about the same grip level as the micro grip, but it should last a bit longer with the wider rings. I have been using these now for around a week and a half and am starting to really get to grips with them. I haven't fully decided if they will replace my Gun Metals as my match darts, but I am going to give them another few weeks and then make my mind up!

As with all DPC darts, the darts are balanced perfectly and have a very true flight. I would undoubtedly recommend any of their darts. 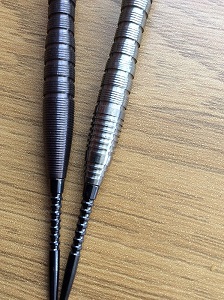