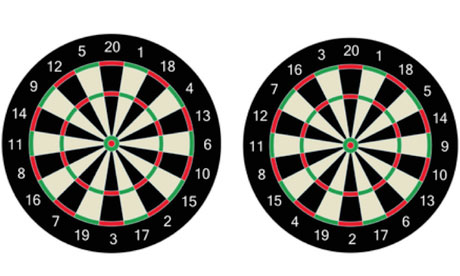 During the BDO World Championship 2013 in the Lakeside Club in Frimley Green players there can try out a new dart board developed by mathematician David Percy and produced by Winmau.

David Percy feels the traditional arrangement of the numbers on the dartboard are from the the mathematical point of view far from perfect. So he did a lot of calculations and played around till the arrangement now is as perfect as possible. By his new dartboard he thinks the sport of darts will be more difficult, a good deal fairer and even prettier. That would be in the interest of the strong players and lucky darts would far less decide a match.
The traditional arrangement dates from the 19. Century. Thomas Buckle had the idea and did it by intuition. David Percy thinks by it players are not punished enough for miss-shots - what his arrangement does. Beside on his board odd number and even numbers now alternate all around the board and similar clusters are spread around the board as evenly as possible. That makes finishing more difficult. All odd numbers are now white segments, all even black segments. By Percy's arrangement it's much more difficult to switch to the double 8 should have missed the double 16, the segments are far away from one another in different part of the board.

Winmau now produced a prototype which can be tested. It will be interesting to hear what the players in Lakeside think about it.