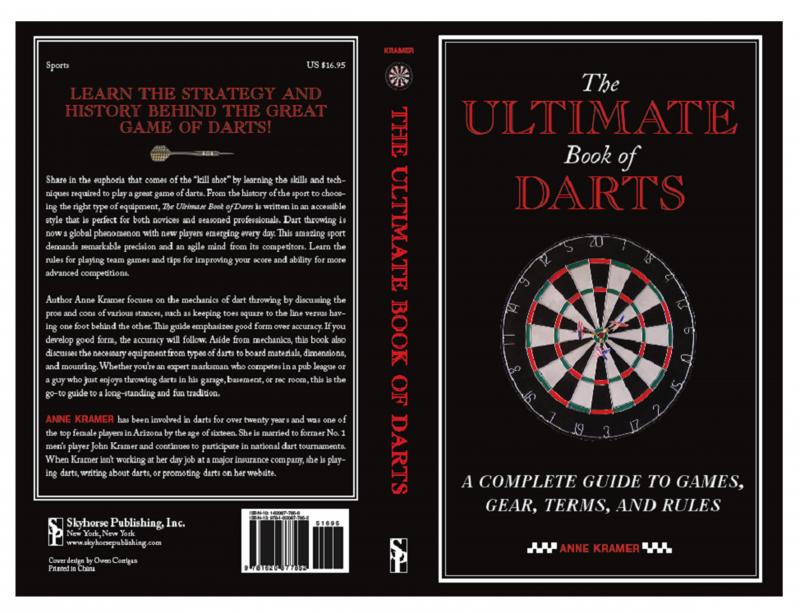 The Ultimate Book of Darts was published in August 2013 by the American darts player Anne Kramer (married to the American darting legend John Kramer). It runs to 306 pages, more then 75 000 words. While some of its chapters deal with the sport of darts in North America the major part of the book is full of information, advice and articles of interest for dart players and dartfans around the world no matter on which level those play. Beside the well-known topics like equipment, rules or darts terminology current topics like the influence of the television and the internet on the sport or the soft-tip revolution are approached with expertise as well.
To be sure the chapters with interviews with the pros and advice from the pros will attract wide interest and give some food for thought.
At the rear of the book beside an overview of world record attempts, a list of American dart leagues and associations, an overview of periodic darting charity events, a reading list and a glossary you can find two really interesting studies by the no longer active English dart player Linda Duffy, which were till now only published in some scientific magazines. Duffy studies sports psychology after she ended her carrer und the two studies deal with practice routines and their effectiveness and the differences between female and male dart players.

As Anne says herself she wants to share the passion for the game with her book and that she does impressively. 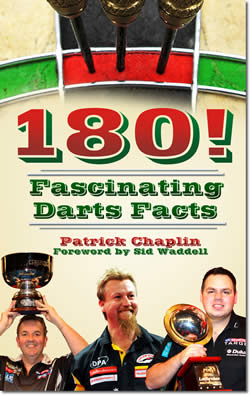 Dr. Patrick Chaplin has published a new book that with a wealth of information will appeal to all people interested in darts. Of course one of the focal points lies in darts history and Chaplin is able due to his research to expose some of the most popular myths of the sport as myths and tells us the not less thrilling truth instead.
In this context he reports how such myths can develop - some years ago he was the unintentional source of a myth himself when one of his famous Fool's Day Columns was so convincing people took it at face value.

Beside you can between others find chapters about the Embassy World Championship, the Winmau World Masters and women darts. But interesting negibilities like the walk-on-girls, music and darts and the origin of some of the nicknames are included as well.

All that is written fluently and gives us an understanding of the sport in a colorful, informative and entertaining way. As the recently deceased commentator Sid Waddell aptly writes in his preface the book is a kaleidoscope of darts.

Dr. Patrick Chaplin once again brought a book to be recommended on the market and I've only one point of criticism - it is much too short. It would have liked to read much more of it!

To be sure all of us have wondered once in a while what the one or other dart-term or dart phrase really means and were it originated. At times one had been lucky and found in a dart book a supplement where a few terms were explained.

Fortunately for us dart fans Bobby George and Dr. Patrick Chaplin took the view, that the special darts language deserves it to be treated less shabby and now published a whole book that has the focus on it. The result is a kind of dictionary of darts terminology which tries to explain origin and meaning of the phrases. That of course it not always possible, even the scientific investigations by the Doctor of Darts fail sometimes.
The book is in no way boring or arid like dictionaries often are. As to be expected by Bobby George it is written with wit and shows delight in doing so while Patrick Chaplin contributes his background knowledge and sees to that we can enjoy beside Bobby George's fabulating real "facts". Many of the phrases are after all only to be understood from the historical or local background should they not, as the book title, originate from Bobby George himself.
The range reaches from really old terms like "Bag O'Nuts" which Patrick Chaplin could trace back till 1910 to modern phrases like the by TV commentators often used "Lipstick" . But the book is not only about darts language, terms like "Exhibition", "Dartitis" or "Belophilite" are covered as well.

Out of the cooperation between Bobby George and Dr. Patrick Chaplin an entertaining, readable and informative book arose which deals with a till now disregarded aspect of the sport of darts and which ensures a gap in darts literature is now closed.

Patrick Chaplin - the only existing Dr. Darts - wrote this book on the basis of his PhD thesis. Meticulously and carefully he sought out sources and analysed them to be able to show the interconnections between the social development in England and the rising sport of darts.

The result is a really interesting and good to read book, might be not a book for everyone something the high price will hinder anyway.

Chaplin first corrects the idea darts has it origin in Great Britain - originally it was a French game called "Flechette" which was developed in Great Britain into darts.
Then he sets right the relationship between the sport and the pub - it was not that darts was played from the beginning and everywhere in the pub. It were the big breweries which supported and established darts and dart leagues in the pubs. One of the reasons was to hinder people from massive drinking and from all kind of gambling - darts was a proven game of skill. Another reason was that it got necessary to change the pubs from low pubs into real public houses to get more people into the pubs offering pub games to pass there the leisure time (and more leisure time people had) instead visiting the new attractions like the cinema and the music halls were you could even take your wife of girl friend or the whole family as well. So the pubs had to get more respectable and family friendly and darts helped to this.

When the National Darts Association was founded in 1925 the sport got generally valid rules. The mass media supported the growing sport as well -especially the Sunday papers (News of the World) gave the sport a lot of coverage and helped to sponsor tournaments.

A highly recommended book for people interested in social history, leisure time culture, sociology or in the sport of darts.

You can buy the book from Manchester University Press, the price is 55 pound.