My idea was to refrain from accompanying this year's World Matchplay with columns as I couldn't watch it live on the spot. And I've never ever been in Milton Keynes either.....
But then Gary Anderson came along and was asked in two different interviews how he intended to pass the time between his won first round match and his second round match and for me astonishing he both times mentioned in a pinch he could go shopping.
Strange I thought - I am almost sure he neither could nor would go shopping. First because I just can't see Anderson as a passionate shopper who in his spare time trudges around all shops searching for the fanciest outfit. And second because I can't imagine the PDC would be delighted when players involved in the tournament that just had been tested negative for Covid 19 would mingle with the untested shopping crowd. They would have to test once again and each positive test would compromise the tournament. 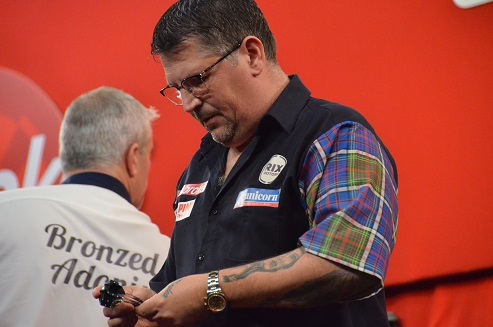 So Anderson's shopping had to be some kind of joke. Probably a joke only the British could understand.
I was curious and decided to put in some research - well, when you start with research normally an article is not far away.
So only Gary Anderson is to blame...
Milton Keynes is not really a town worth a visit, only perhaps for an urban planner who intends to have a look at the architectural eyesores of the 1960s. Milton Keynes is a so called "New Town". New Towns were constructed in Great Britain in the 1960s as some kind of relief towns for major cities. That's not quite true - already after World War II New Towns were build - than and later in the 1960 because housing space was scarce. Those after World War II were mostly built around London. Milton Keynes was built 1967 half way between London and Birmingham. First those towns were a real success but for today the infrastructure is no longer right and the social problems are huge.

To build Milton Keynes a few small villages which already existed where included. As all New Towns the town was planned on the drafting board - laid out in a grid pattern, a lot of streets, many roundabouts. Today the roundabouts of Milton Keynes are decorated with concrete cows. Milton Keyes is proud of the biggest indoor ski hall of Europe and of the longest shopping centre with -believe it or not - 720 metres. Might be that was the reason of Gary Anderson's allusion.

But back to this year's World Matchplay which is different to all World Matchplays before. No Winter Gardens, no Blackpool Tower, no crowds at the beach or in the venue, no holiday atmosphere. The players are alone during their walk-on, the noise is canned and fits most match situations quite well - somewhere there seem to sit some really alert techniques so that the cheer comes at the right moment with only very small delay. Nevertheless most players feel the noise is "weird" - and they all use the same word to describe it. Only Krzysztof Ratajski thought it was deceptively real - especially as he usually not really looks at the crowd but only hears it. On stage John McDonald, a referee and two writers - as always. I feel Sky Sports and the PDC came up with quite a good concept. Out of the commentators Rod Studd and Wayne Mardle are missing and I really miss them - though those present - including Nigel Pearson who replaces Dave Clark - do a good job.

And the matches? There were no really weak matches in the first round - the lowest averages had Gabriel Clemens and Steve Beaton with just below 90. Nevertheless it was Clemens who caused one of the upsets of the first round when he eliminated reigning champion Rob Cross. Cross had the better average but the lower hitting rate on the doubles. Gerwyn Price was eliminated first round as well - by a much focused Danny Noppert. And Nathan Aspinall didn't survive the last first round match against Dimitri van den Bergh - might be van den Bergh really learned something during his enforced stay with Peter Wright during the lockdown - at least van den Bergh thinks he learned a lot about the right attitude from Wright. The first round was a stumbling block for some more Top 16 players as well - Dave Chisnall and Ian White where eliminated too but they never were among the top favourites to win the event. The highest average played Krzysztof Ratajski - who impressed against Jermaine Wattimena. Almost as high was Glen Durrant's who played as Durrant in Top form plays. Though their averages were not as high both Adrian Lewis and Vincent van der Voort impressed as well. Lewis looked much more stable as one was used to. The same applies for van der Voort. Probably the lockdown break was good for both. Three matches needed overtime in which Mensur Suljovic, James Wade and Joe Cullen prevailed - Cullen even in a Sudden Death leg. One player who really looked like he enjoyed himself was Simon Whitlock who joked around with the cameras and the absent crowd and beside had no problems to win the opening match against Ryan Joyce.

So all in all a rather satisfying first round though some of the top favourites disappointed most. But it included drama, fun, great performances and upsets - you will not get more.

But I never found out whether Gary Anderson went shopping after all...