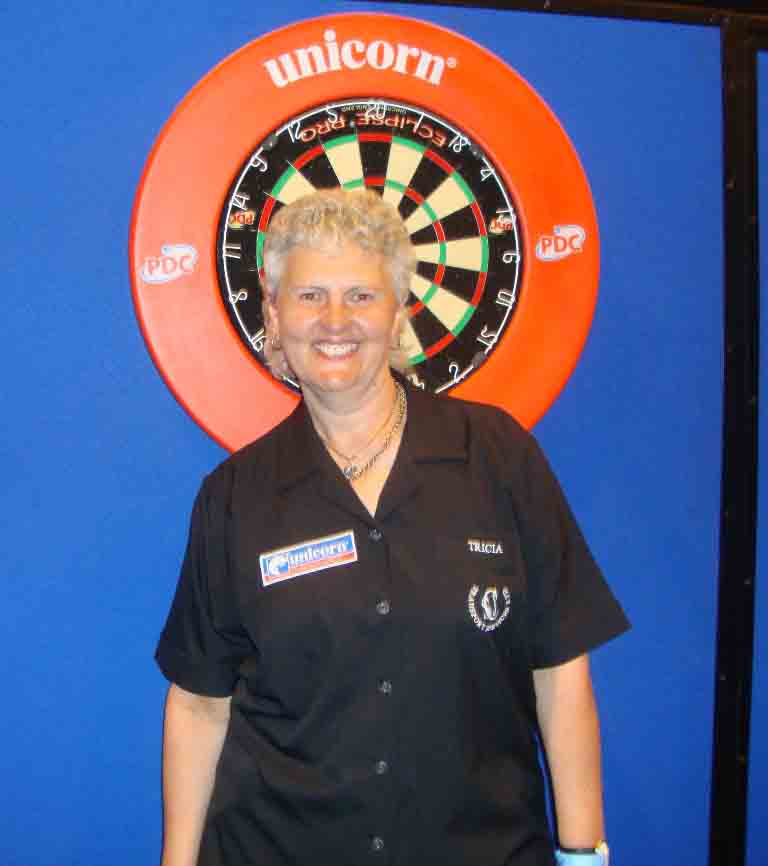 Tricia - when you first heard of the PDC Women's World Championship did you immediately decide to play the tournament?

Will it have any consequences on your participation in BDO tournaments?

Was it a hard competition?

It wasn't so much as a hard competition but the standard of players was very good.

And how hard was it to get through to Barnsley?

I did not have an easy playoff at Riley's in Croydon, so I had to play well.

How many women played in your Riley Playoff?

There were 19 players in the Riley's playoff at Croydon.

And do you know of any top player who didn´t win through?

There were no top players that didn't get through that I know of.

What did you think of the way the PDC set up the tournament?

Would you say it was a real world championship setting?

And is it for you a real World Championship though quite a lot of the British female Top players did choose not to play the qualification and not a single of the strong Dutch players took part?

Yes of course, regardless of those whose choice it was to not enter.

Do you know why that happened - did you talk for example with Trina Gulliver about her motivation?

Yes, I really did ask Trina why she didn't enter and had whether anyone put pressure on her but she said it was her own decision not to enter.

By reaching the final you won a place in the Grand Slam in November. Do you intend to take part?

Yes I do. I could not let an opportunity like that pass by.

And you won a PDC Tour Card for two years as well. Can you imagine yourself playing the Pro Tour for two years or is that no option for you?

How would you assess you chances playing the Pro Tour? Anastasia Dobromyslova who even is a former World Champion doesn't seem to be able to really make an impact there.

Obviously I know I would never win a Tournament playing in the Pro Tour, but I do enjoy playing against the men.

You wouldn't think it lost time?

No. I am sure it would improve my game.

Would you at all be able to return into the BDO should you play the PDC Pro Tour for two years?

Who knows? Rules are always changing.

Has the BDO already made a statement relating maybe consequences?

No Statements have been made from the BDO as yet.

What do you think is the reason that you and Stacy won through to the final - two very experienced players?

We were the inform players on the day.

What impression did you have - how much interest the PDC Women's World Championship did arouse?

There was quite a lot of interest but it was not all positive.

The negatives I heard most were that women are just too weak and because of this it´s not worth watching. Are the women really weaker players or is it they just don´t have enough opportunity to compete to get as strong as the men?

There are some really good female players who would give men a run for their money, but unless you are professional and have more time to practice and play every day the women are always going to be the weaker player.

Do you think the PDC really plans to get more involved into female darts?

I'd like to think so but then it's up to the women to get involved more with the PDC when the opportunity arises.

Tricia - after you reached the final of the PDC Women's World Championship some people seemed to be surprised and didn't seem to know a lot about you Are you not really well-known in England?

I am quite well known in England and around the world, but I am not promoted enough. Those people that don't know much about me are probably only interested in certain players and don't really want to know.

Is it perhaps that female players are not really well-known?

The top female players are always being written about in certain magazines.

You are one of the few female players who's got a sponsor -how did that happen? And how much does it help?

I got my sponsor through a friend and he has been a tremendous help. Without him I probably would not have done half of what I have achieved over the last 18 months.

I suppose you need a job beside darts to earn your living - what is your profession?

I am a Purchase Ledger Clerk in a finance department for the Countryside Alliance. 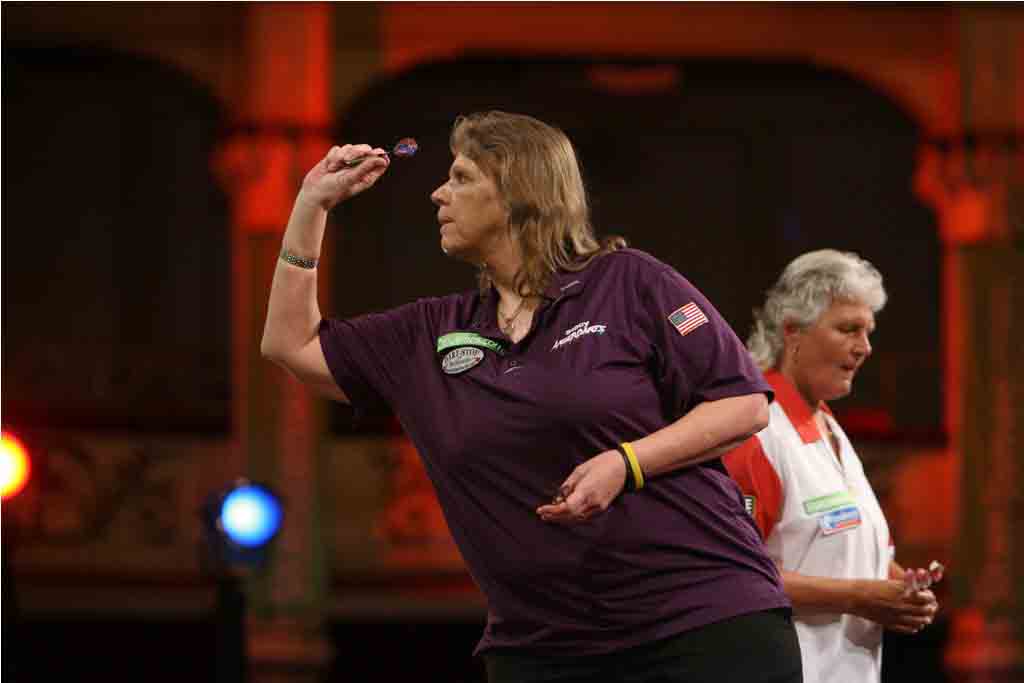 And when did you found out you want to be more then just a pub or league player?

When I started to win all the league competitions.

I read somewhere your dream is it to win a World Championship. What for you know would be the "better" title" - the BDO or the PDC title?

Any World Championship would be a good title for me,

I've heard you have some problems with you shoulder - is it a darts related injury?

I had keyhole surgery 6 years ago as the tendons were torn and very painful. Unfortunatley it as reared up again and I am having treatment.

Did you - perhaps - play too much?

Yes, it is wear and tear and a touch of arthritis.

Not as much as I should.

And what do you practice?

I prefer to practice by playing someone the best of 25 legs or more.


Do you think there is a difference in how the female players practice and how the men practice?

Might be there is a difference in attitude? Would you perhaps think the women might be not as dedicated as the men?

Any player that was ambitious will find some time to practice.

Francis Hoenselaar thinks one of the differences between female and male players is that the women are far less consistent. Do you feel the same? And do you then think the being "inform" is even more important in the women's game?

Yes Francis is correct in saying female players are far less consistent. And yes of course being "inform" is important

You are a very experienced player - what is the advantage of being "experienced"?

I can't see an advantage really, may be I am able to handle pressure better but nerves still set in.

Would you say there are enough young players around? From the outside it often looks that especially with the ladies the sport is dominated by the same players for years - one rarely hears new names....

There is always a lot of good young players coming in but it seems once they have finished playing youth they seem to lose interest.

Is darts might be not as popular in England any longer?

Darts is still popular in England.

Did you already compete with men, perhaps in league? And do you think the ladies could keep up with the men?

Yes I do play in a couple of men's Leagues. There are already a few ladies that play in the open Leagues.

Is it something you enjoy?

I do enjoy competing against the men.

Do you prefer ladies only tournaments for serious competition?

Not in the local leagues.

You would vote for mixed leagues but for separate female and male tournaments and circuits on the Pro Level?

If the women had their own tournaments with the money that the PDC have paid out to the men then there would be no need to compete against the men.

So would you have a choice would you prefer to play some kind of ladies only Pro circuit like it is on the BDO or could you imagine a mixed PDC Pro Circuit?

A ladies pro circuit would be better then a mixed one.

Do you think the female players would at all be interested in a lady's PDC Pro Circuit?

I would for one, and I know there would be quite a few more interested.


Some people think should the PDC start to get more involved in women's darts there'll be a split as it happened with the men in 1992. What do you think will happen and are there in the end enough good female players to fill a BDO and a might be PDC Pro circuit?

I think if the PDC do get more involved in womens darts I think s split would happen. There would be quite a few people that would leave the BDO.

One hears a lot that for different reasons women are in disadvantage in darts compared to men .

It´s interesting you feel men don´t like to play women because both Trina Gulliver and Francis Hoenselaar told me they feel really appreciated by the male Pros - your experience seems to be more negative?

Trina and Francis are appreciated by the top men as they are first class players and have achieved a lot in darts, and can hold their own.

You seem to play better and better with getting older - do you have an explanation for this???

How would you characterize yourself - what is your strength and what your weakness?

I am friendly and easy going but I don't promote myself enough.

Ladies darts certainly is very much in the shadow of men's darts - have you got any idea what one could do to change it? 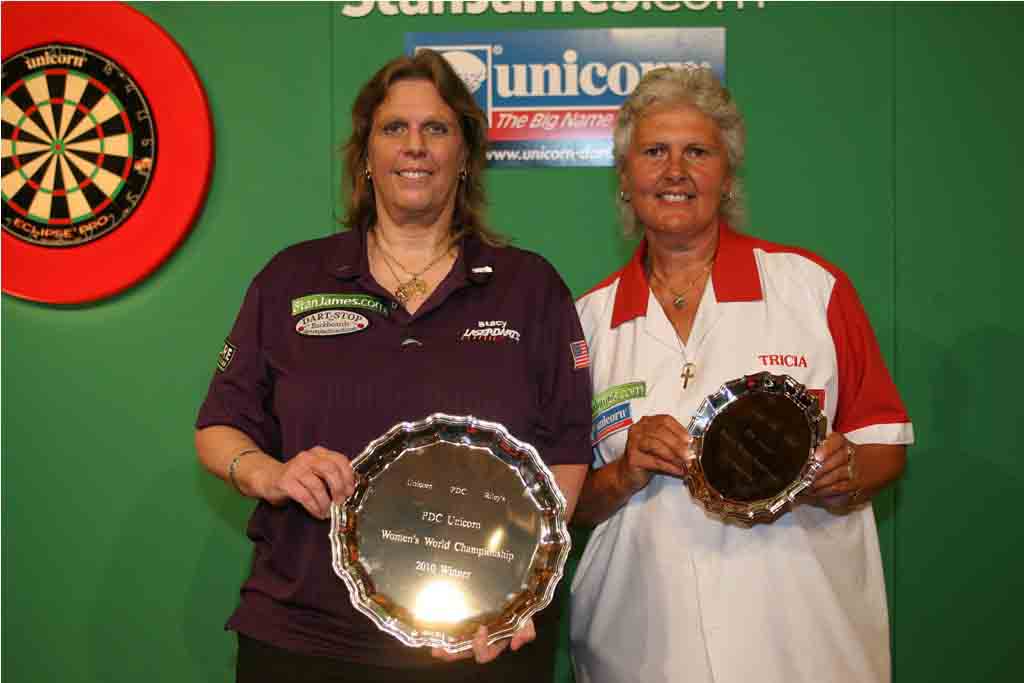 Is it then in the end only a marketing problem?

What do you think one could do to promote female players better? Can the women themselves do anything at all?

What the women need is their own sponsorship and TV coverage just for them, not to be slotted in late at night or in between the men.

Has this little interest an effect on requests for exhibitions as well - do play exhibitions you at all?

I have done some Exhibitions.

What is it that you fascinates most in darts - what keeps up your interest?

It's just a hobby, one that I have always enjoyed whether I win or lose.

What are your hobbies outside of darts?

My other Hobbies include Fishing and ten Pin Bowling.