I had first planned to do an interview with Tony O'Shea last year - I even talked to him. But the result never was published as I decided to set up my own website.
As it is really a lot of fun to talk to Tony I thought I could start another attempt and used the chance to talk to him again during the Grand Slam in Wolverhampton. And this time - as I promised him - I started to work at the interview as soon as I returned home! Here you are... 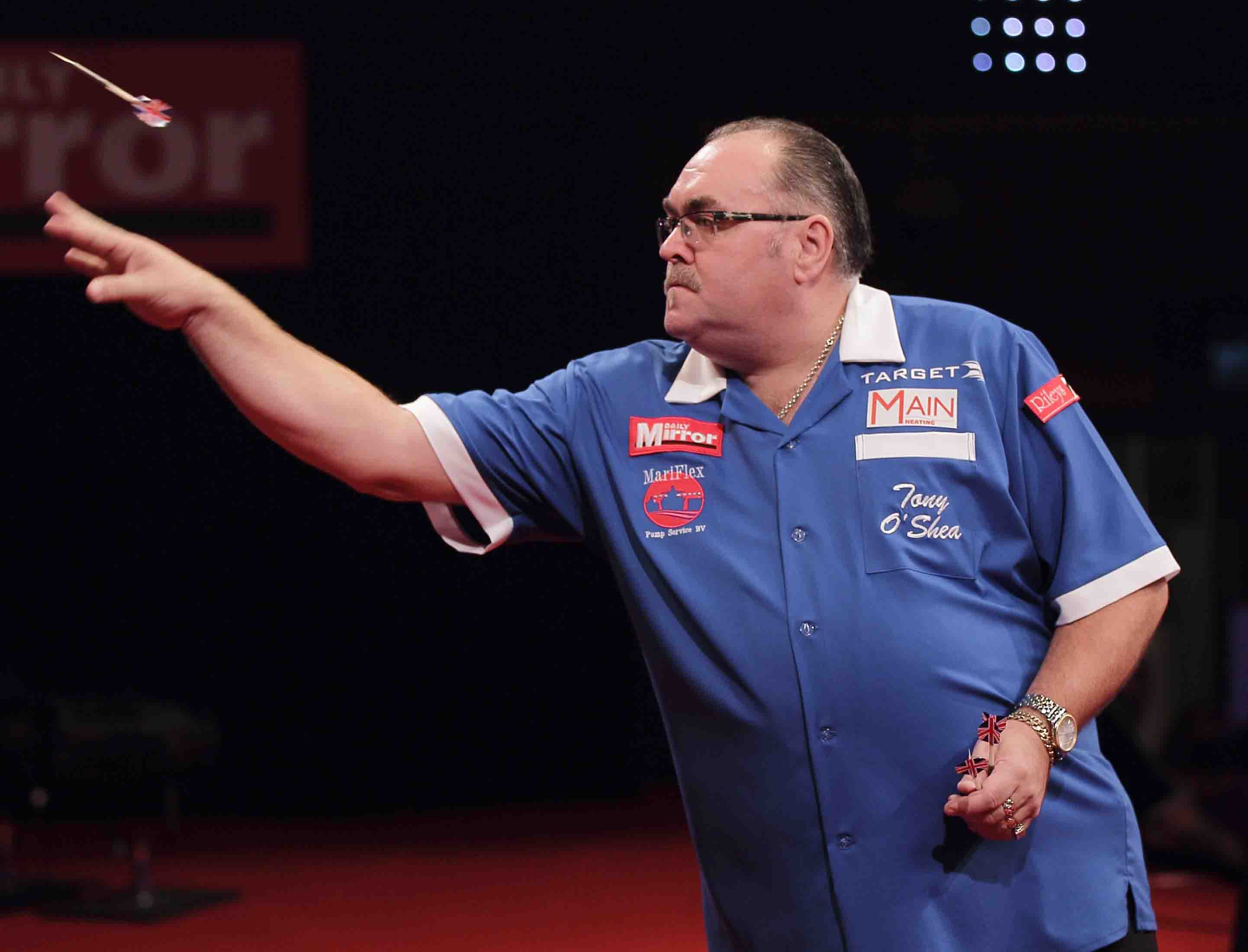 Yes, I started playing when I was 18 years old.

But you never played BDO youth?

No. I only played league before.

Is league BDO too?

It is in some way

And how is it worked?

The base is super league - then comes county- something over 60 counties in England - and then national. That's the way I went as well.

We all heared about the PDC offer to buy the BDO and to invest money into grass root darts - do you feel it would be necessary the BDO?

I think what we would need are new faces and new ideas - it's all very traditional.

You told me last year a switch to the PDC was not really an option but of course when you played in several Rileys Dart Zones in summer and autumn rumours started again.

Oh, I've done lots of exhibitions together with PDC players. I am good friends with a lot of PDC players, Adrian Lewis and I had a lot of fun at the exhibitions. Should I move the PDC players certainly would be not problem. 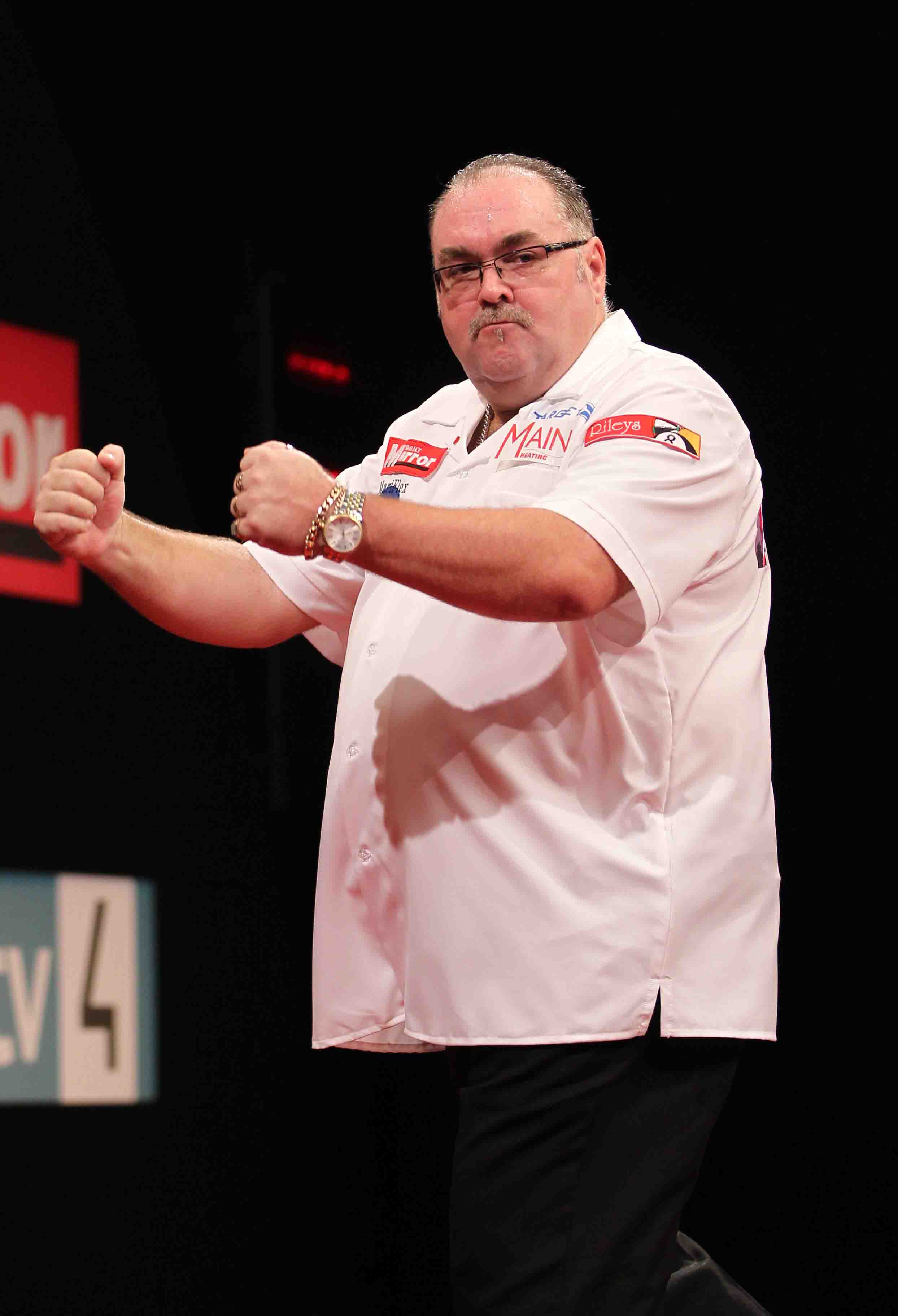 And would you say it could happen?

It certainly is an option - I was thinking about it last year but didn't decide to do it.

And the Tour Card would that be interesting and would you take it?

Yes, of course the Tour Card is an interesting offer and yes - I think I would decide for it.

Did you in all the years you are playing now ever take a break from darts?

Well not really. Once we were on Tenerife for three weeks. I didn't take my darts with me but there was a German owned pub with an electronic dart board. Electronic darts is very popular in Germany isn't it? Well I of course played and immediately I hit a Nine-Darter.

What do you prefer in the BDO - what do you like better?

I think playing darts in the BDO is much more relaxed. There is much more camaraderie, it's all more social - we are like a family - in fact we pass more time together then with the family.
And of course I love it to play for England. To play the World Cup and win the singles - that really was great for me at all - it was only for honour. That's something a lot of young players don't understand and don't want. Money is for them most important.

And what is better in the PDC?

Of course the price money. But that's a risk too. Previous you played from local to regional to county to national. Now young players jump into the PDC because of the money - that's very hard for them when they've no experience at all.

Is there a difference between a BDO and a PDC player?

Is there a difference to the BDO crowd?

Is it for you a motivation to play against the PDC top players like Phil Taylor?

No I can't say so - I know all those players from the BDO - I've played most of them. I know Phil well - we live not far away from one another and we are old pals.

The BDO offers a lot of different tournaments, team, doubles, mixed doubles, Penthatlon - the PDC only 501. Is 501 the real thing???

I think that's another traditional thing in the BDO. By this such a tournament offers something for all the family - the social aspect is really big!!!

Have you got some more information about the tournament series the IDPA will install next year?

No - I really don't know much about it and would be happy to get to know more. But I am none of the persons involved.

Can one compare the IDPA to the PDPA? Has one to be member of the IDPA to play BDO/WDF tournaments?

No, you don't have to be a member. The IDPA more is an organisation which offers services to the player like travel arrangements or room bookings - things like that. I used those services myself but now with the internet it's not really necessary for me any longer.

Do you play cricket as well? Is it played in tournaments?

Not at all - we play tactics -but that's really only for fun. 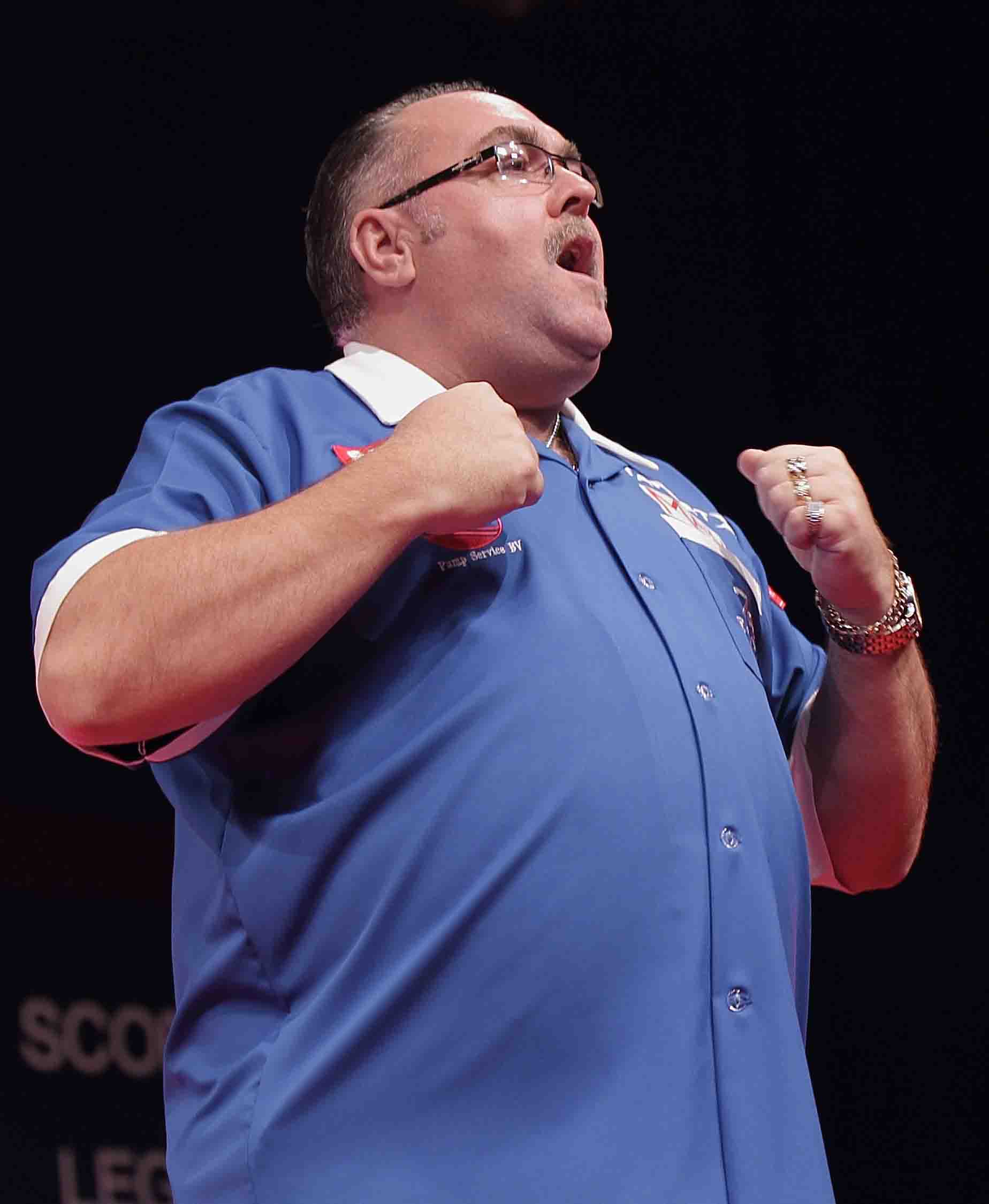 Which format do you like better - a short one or a long one?

As one of your friends is a top BDO Players as well (Darryl Fitton) you've to play one another quite often. How difficult is it?

Usually we really enjoy it and we get rather fierce and loud. We play all the time together in league. We thought this match in the World Championship we played was a bad one because it was so quiet. But when I watched it recently I found out it was really good!

Do you practice together as well?

No - we never practice together.

Having to beat a friend is certainly a mental problem - is darts very much a mental game?

It is. There are a lot of evenly matched players around - what decides is focus and mental strength. That in the end decides whether you leave the stage as a winner or a loser!

When Mervyn King left the BDO he said he now would need to start practicing, Gary Anderson mentioned something similar - do you practice?

I would say whether you have to practice or not depends. You see I never practiced. But one and a half year ago when we moved into the new house I did hang up a board and started to practice.. And now I suddenly win tournaments. So for me it works!!

You might have heard of Paul Gillings and the Darts Performance centre and the sports scientific approach to darts or about sports psychologists and darts - what do think about such new ways?

Oh - you might be surprised but I've really thought recently about talking to a mental coach. I tend to lose too often in the finals. Might be working with mental coach would give me exactly that extra edge I would need to get there.

What is it you enjoy most in darts?

The social aspect is what I most enjoy - the camaraderie - its family away from family.

Yes I like them very much - I did some with them before I joined them.

How much money still is in exhibitions?

We are still quite busy. No longer in Holland but when it dipped there it got more here. We've done some in Germany and Belgium as well.

Are you a full time pro?

Yes for four years now. I've got a real great Dutch sponsor - he's in the liquid trade. I doubt without a sponsor it would be possible

What was your profession?

I was a golf green keeper - that really was a physical work. Since then I put on a lot of weight. My wife always says I should play more golf.But I really don't have the time.

Last year you told me you played with old Erik Bristow darts and that you not really bother much about your darts, flights and shafts but now you are sponsored by target and have got your own signature darts.

Well - nothing has changed - they are in fact the same darts offered in a wide range of weights and soft and steel and with different coatings. But they are really the same darts I've always used - only that now my name is on them. 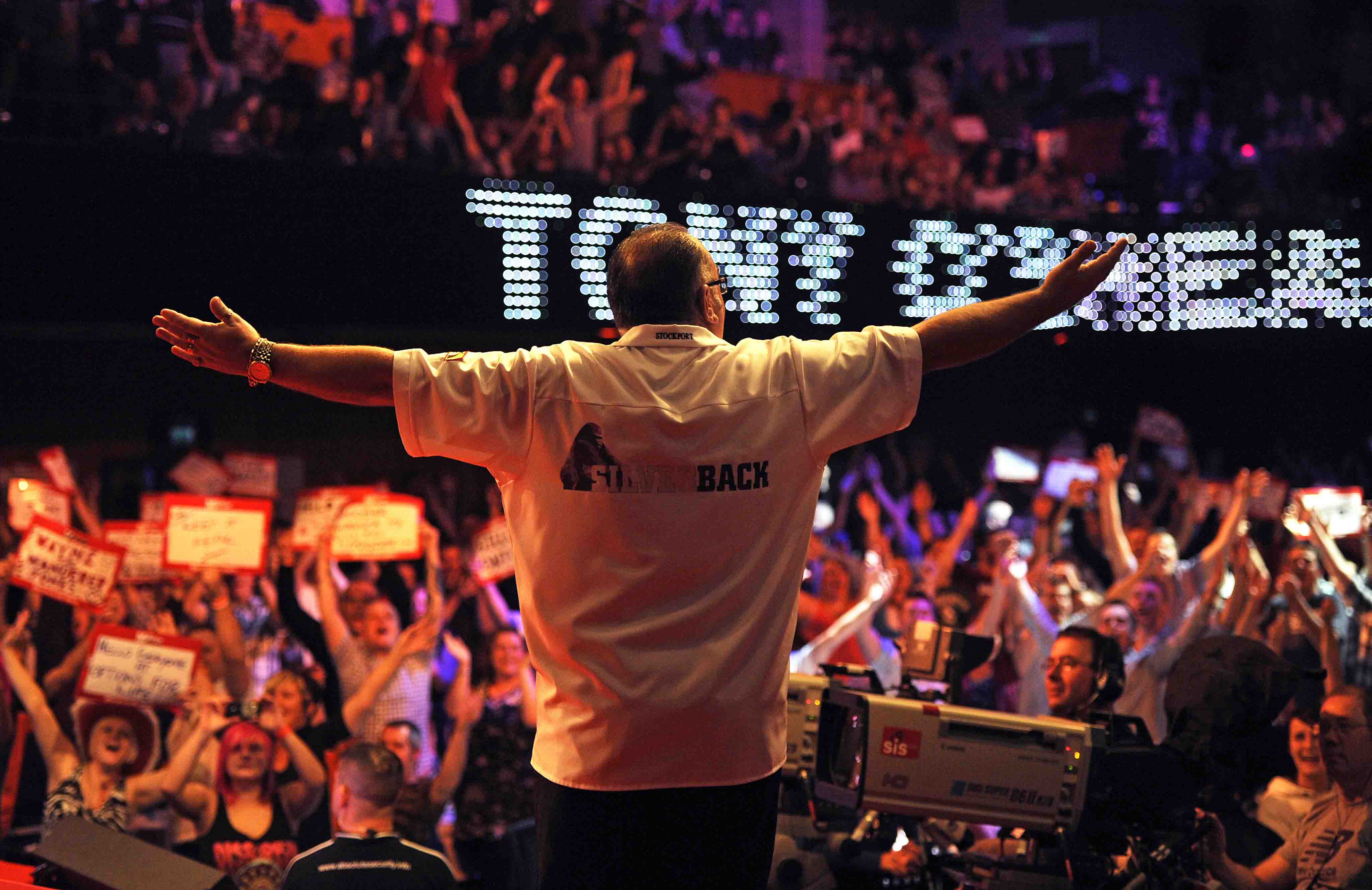