Ted Hankey is one of the controversial characters in darts, his relationship to the crowd is somewhere between love and hate and often enough it happened player and crowd goaded each other. On stage Hankey tends to react emotional. It can happen he punches the board in anger or shows the spectators in explicit gestures his disapprove - that last occurred during the Grand Slam in November 2010. 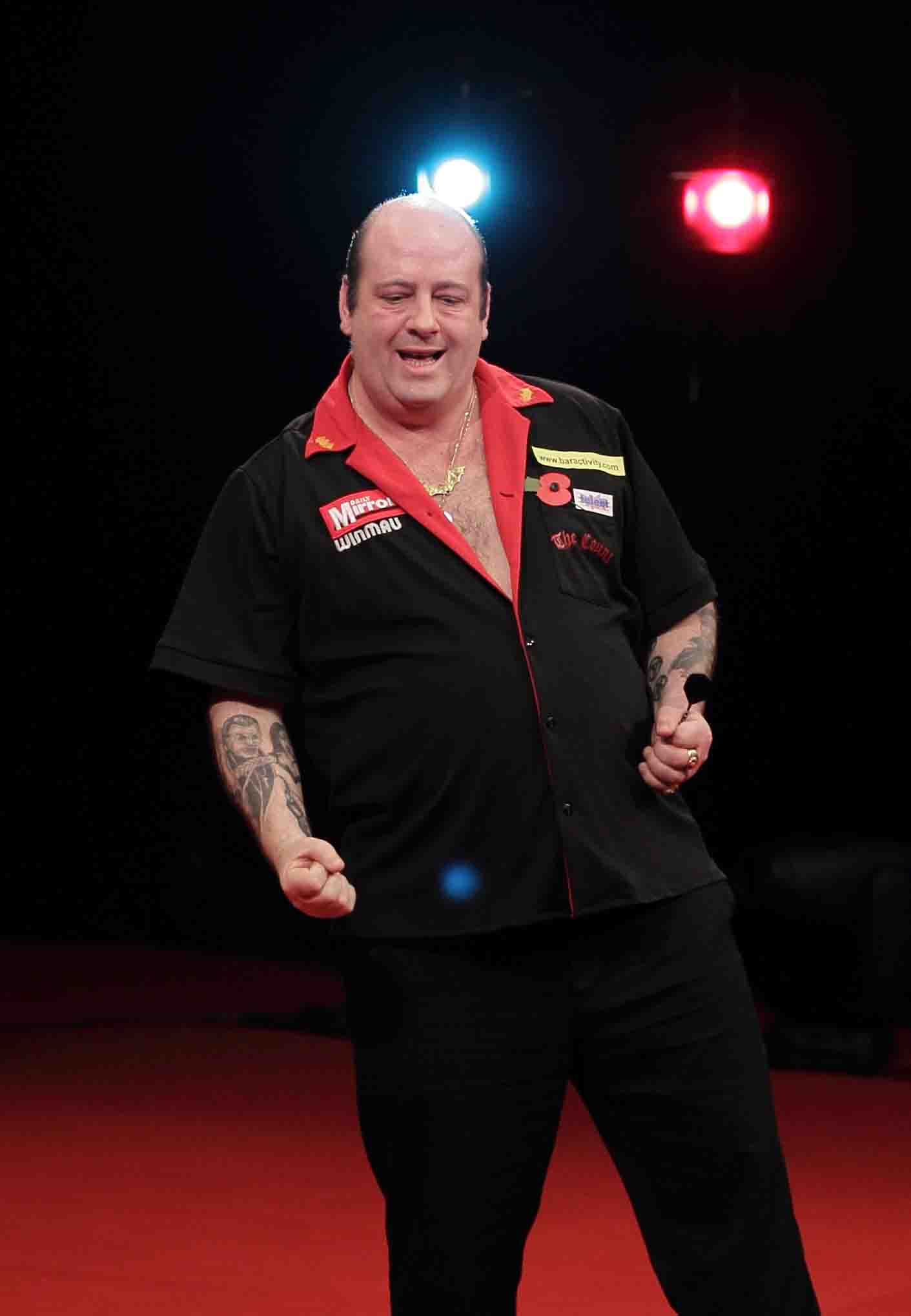 In the light of this facts I felt slightly unsure during the Grand Slam 2009 of asking him for an interview. But I observed that the Ted Hankey offside the stage is in no way scaring but polite, affable and cooperative. So I decided should I have the chance again in 2010 to do the interview. But this time my scheduling was mixed up ...

Thanks to Red Dragon Darts in the end I succeeded, but thought Ted Hankey - probably not as well known as the top PDC players to everybody - would deserve a short biography as well.

Ted Hankey was born on 20. February 1968 in Stoke-on-Trent and started already as a child to play darts. Important for his darts career was a school theatre performance in which Ted acted as Count Dracula. It looks the appearance made a lasting impression on him because at important tournaments Hankey appears in a black cape on stage and throws plastic bats into the crowd. Even his nickname "The Count" is an allusion to Count Dracula.

I don't know much about his early years in darts but suppose it was a typical BDO career and he played Super league and County before he joined the BDO in 1994. I know he still played County some years ago, might be still plays.
Hankey won his first BDO/WDF tournament in 1995 - the Malta Open. He won it again one year later and in 1997 this was followed by his first bigger success when he reached the semi-finals of the World Masters. Till now he never won the World Masters but two further times in 2003 and 2004 reached the semi-finals.
In 1998 he qualified for the first time for the BDO World Championship and till then played in it every year. Two times he was the crowned World Champion in 2000 and 2009.

2000 his opponent in the final was Ronnie Baxter. The final was the shortest final ever - only 45 minutes. Hankey threw nine 180s and finished it with a 170 checkout - certainly a notable match.

Between his two titles Hankey could celebrate several tournament wins - for example 2002 and 2003 the Bull's German Open title - but due to his high consumption of alcohol he started to get problems. Finally some of his BDO friends, one hears it were Tony O'Shea, Darryl Fitton and Gary Anderson, after his defeat in the quarterfinals of the BDO World Championship 2008 told him to change his lifestyle. Hankey already had announced he would chuck in his darts... 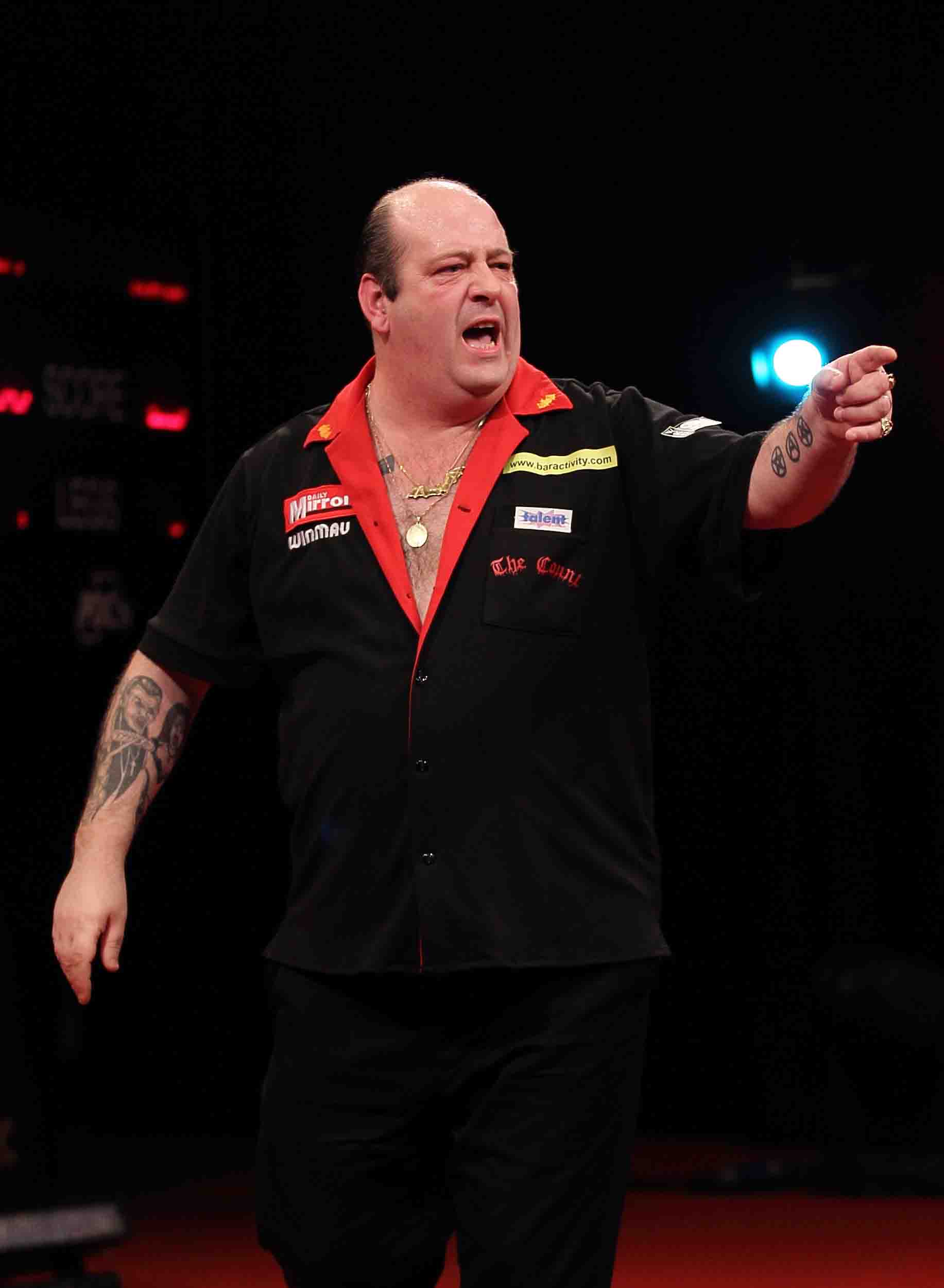 It looks his friends advice helped because in 2009 Ted Hankey won the World Champion title for the second time. Instead of 13 pints of beer before an important tournament he now took only three. In the final 2009 he defeated Tony O'Shea in a thrilling match. He kept his nerve and fought through. Ted celebrated the title with his 12. tattoo, a hearse.

2009 and 2010 Hankey was invited by the PDC to play the Grand Slam of Darts and in 2010 he could celebrate a personal triumph when de defeated Phil Taylor and managed to gain the respect of the crowd. But already in the next match he had lost it again. Afterwards Hankey stated even should he be invited again by the PDC he would never return to play before this crowd which didn't want him.

In 2010 Ted Hankey only won a single tournament but several times was under the last 16 or even better. During the World Championship 2011 he lost in first round due to an arm injury which he commented with: "I'll go home and spend even more time with my strawberries". He's started into gardening and grows all the year round fresh strawberries.
He returned from his strawberries to win the Isle of Man Open and then reached the semi-finals of the Mariflex Open.

Ted Hankey is married for the second time and has together with his wife Sarah a daughter and a son. Sarah brought an own son into the marriage while Ted has four children with his first wife.


And now - the interview: 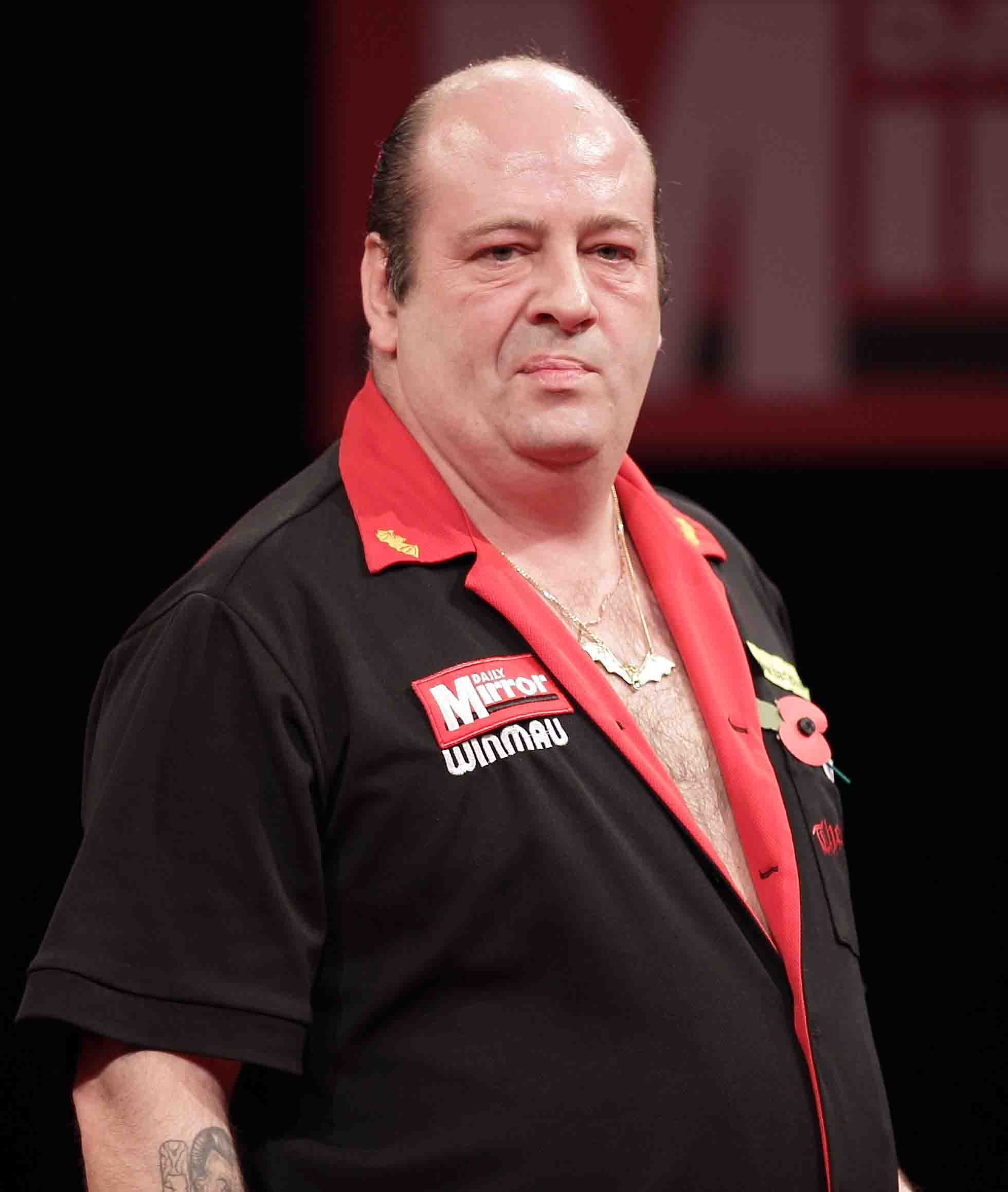 Ted, you are around for a long time already - when did you start to play darts?

I started to play darts when I was 9 with a few mates, and we soon got involved with the local pub side and it went from there.

I'd won many open events, but my biggest first success was winning the Dutch Open in 1999. That was a very special win for me.

Why do you think it happens regularly in the BDO that a champion can't keep his title in the following year? Is it really that there is such a lot of talent around?

The year after winning the Lakeside World Championship is such a busy one that in a strange way your darts practice can get pushed to the side a bit. You only need to lose a little focus and the other guys who are in form will take your place. The talent and standard of the players in the BDO is extremely high, as many players who would not be known on the High Street regularly throw 30 plus averages against you.

How did you get on with your PDC colleagues there? Probably in private live there is not such a split???

I've got great friends who play on the PDC circuit and so there is no split off the oche. The rivalry is healthy and adds some spice to games. 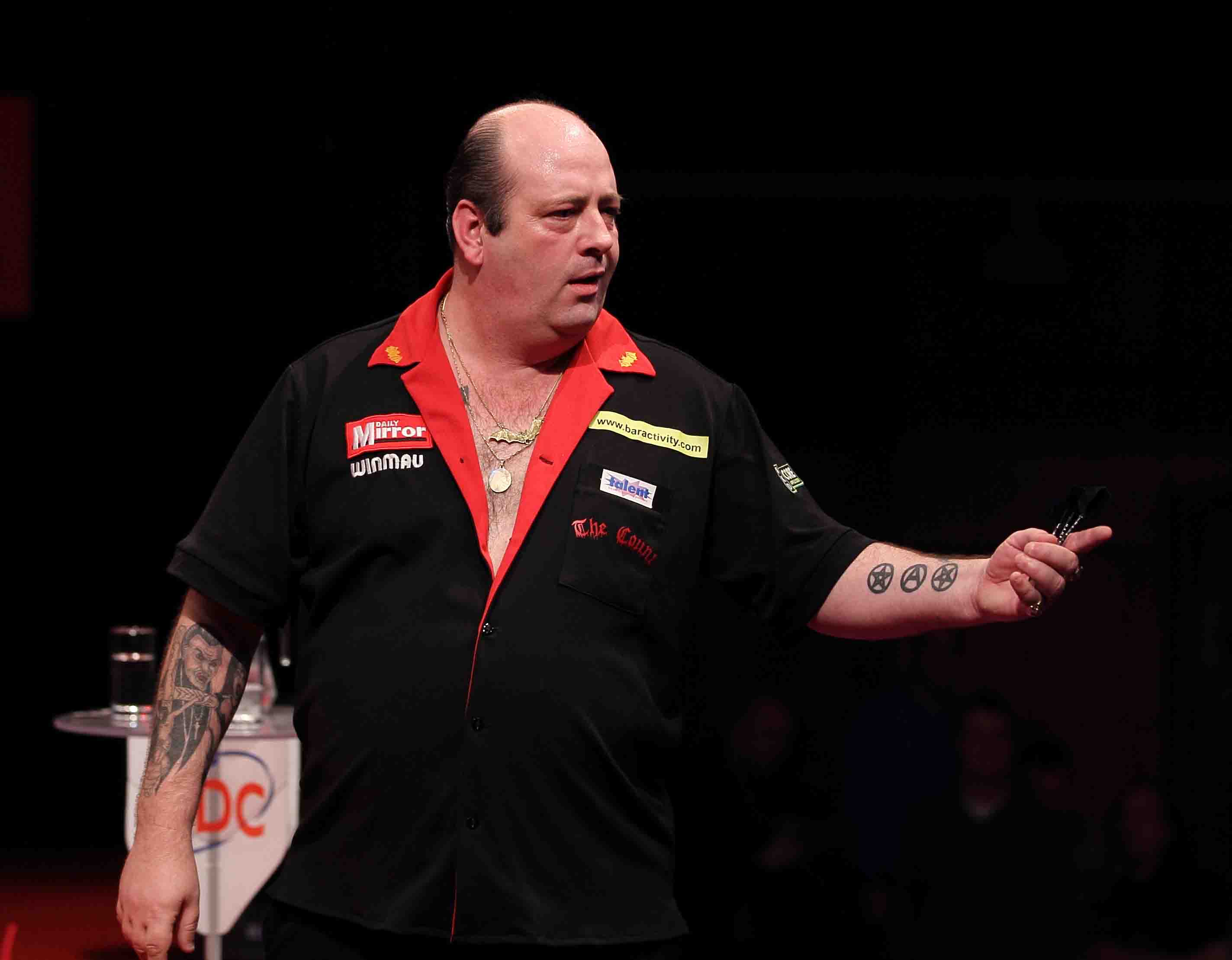 I love it more than anything else, the buzz of a packed crowd and TV cameras is what we all strive for.

Does the crowd in any way still affect you?

If fans are hell bent on showing no respect for players on their throw then it can affect me. Everyone thinks I'm the "bad boy" but I'm far from it. Booing has become part of the drama, but when players are throwing they should respect that so we can put on the best possible show.

I suppose you are a full-time pro - can one earn a good living with the BDO price money or is it necessary to have a sponsor and to do exhibitions?

You can earn a good living on the BDO but as events tend to be at the weekend you need to do something to keep you busy in the week. Having sponsors is great as it helps you plan the year ahead.

Do you think there are room and money and players enough for two darts organisations?

Yes there is as darts has to be accessible for all. The BDO do a great job at making this possible as well as having the advantage of terrestrial TV coverage, and the PDC have their own niche in the market.

Yes I really enjoy them as I meet so many genuine fans. Every now and again I get beaten!!

You play very light darts - did you always play such a weight? 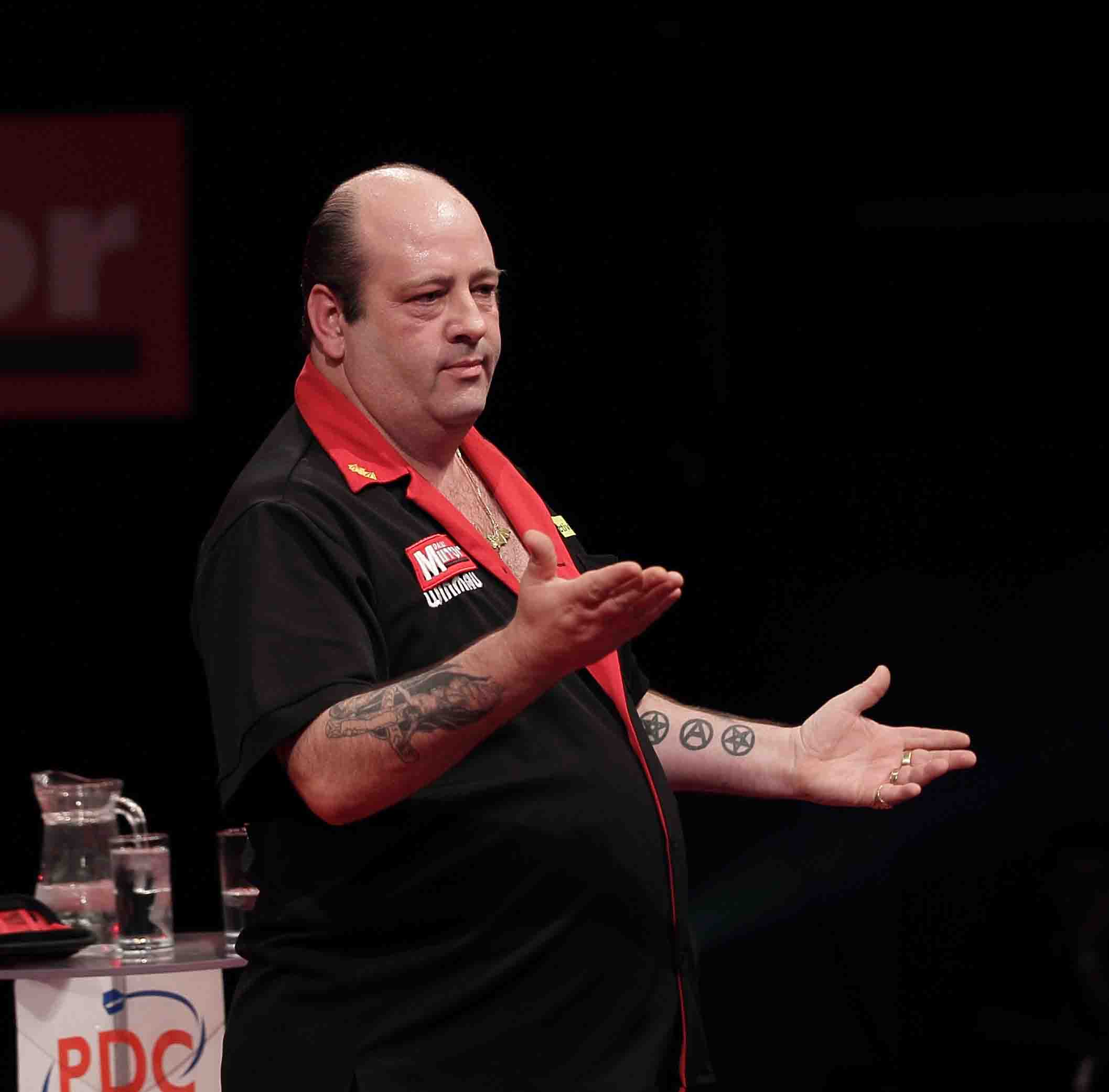 Yes for as long as I can remember. My throw is light and that's what suits it.

You often hear from top players who play around with different set-ups and different darts - are you one of those or do you think you've got the ideal set-up and stick to it?

The latest change I made was to my new Winmau darts and I've not changed my set up since and that was 3 years ago.

Yes I play darts nearly every day and work through several of my practice routines.

Do you something special to prepare for a really important tournament like the World Championship?

Hopefully I've played enough competitive darts to be ready, as if you have to do loads of practice it can leave you mentally tired.

And do you think you still can get better?

Ha ha of course I can, as like most Pro's we seldom hit the averages that we hit in practice on stage!

Are you still motivated - you are already a two time World Champion?

I'm hungrier for the 3rd Lakeside title than I was for my first. 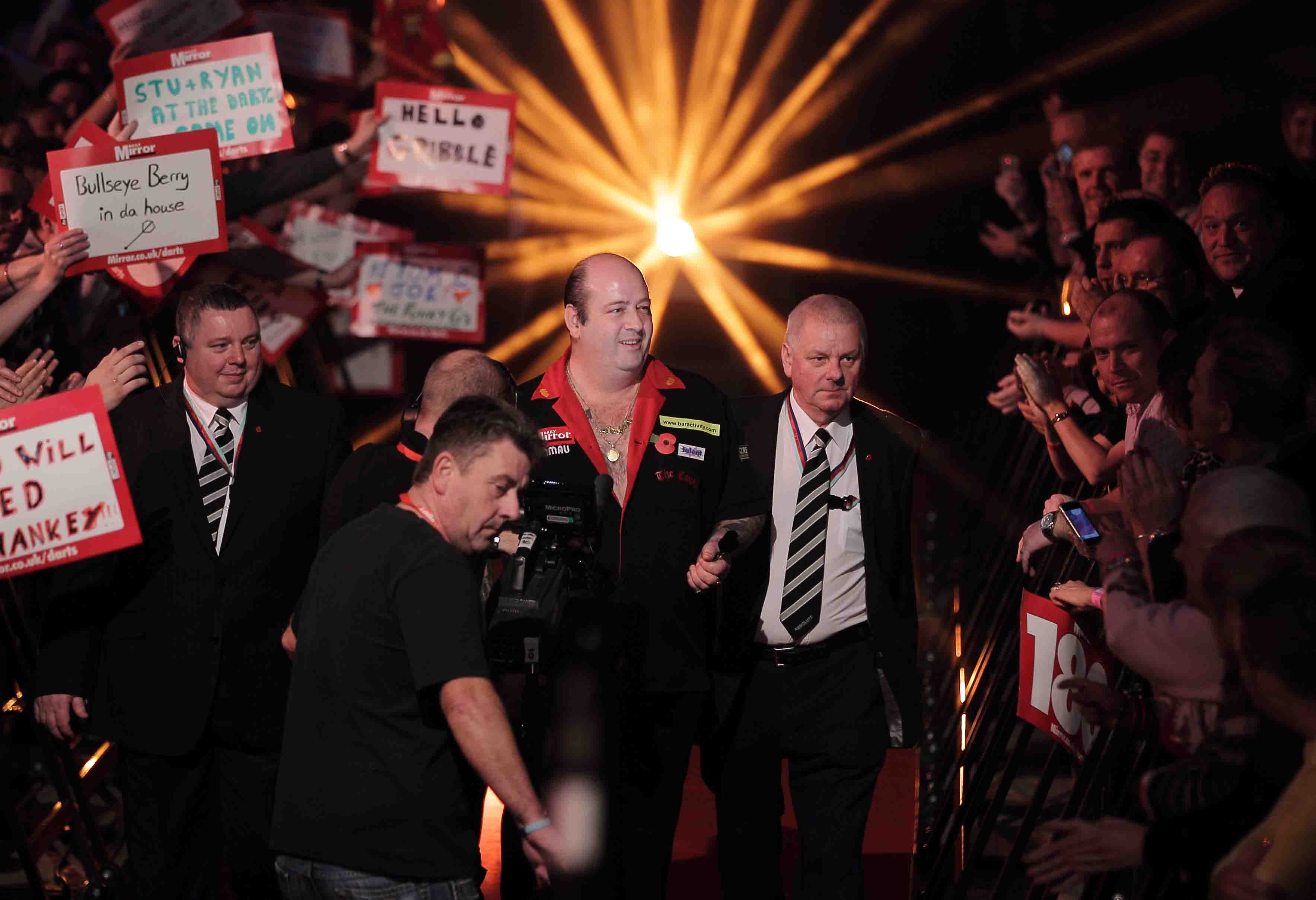 Pictures with courtesy of Chris Sargeant/PDPA