Young Austrian Rowby-John Rodriguez soon established a reputation- especially since he plays in the PDC - on the Youth Tour and the Pro Tour. 2014 he stood in the final of the PDC Unicorn World Youth Championship where he lost to Keegan Brown. In the PDC World Cup 2014 he together with Mensur Suljovic formed Team Austria. He qualified for two of the European Tour Events and for the European Championship, played as the first German speaking player the Grand Slam of Darts and will give his debut in the PDC World Championship 2015 - that's a lot of TV presence and a lot of publicity for a twenty year old!
I talked to Rowby during the Grand Slam 2014. 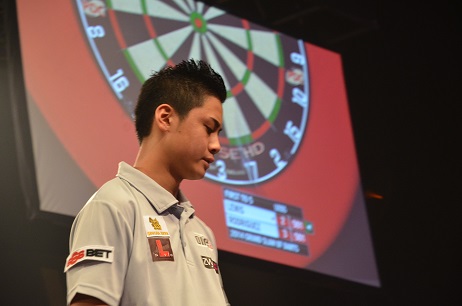 Rowby, you just lost your last match in the Grand Slam and now are out of the tournament.

But all in all the Grand Slam was a positive experience. And to be sure I still need to gather experience and that takes some time. And I allow myself that time.

How and when did you get involved into darts?

I started to play darts in 2009. But as the family tells me I already threw my first dart when I was around one year old.
It was my father who got in involved. My father was quite a good dartplayer but he quit the sport for us children as he had to look after us. I first was involved in bowling and was quite good. But then I realized what my father had given up for us and thought I wanted pass something back to him. So I started to play darts.

Do all family members play darts?

Yes, I've got three brothers and all play darts as well. The only one in the family who doesn't play is my mother.

Do you play or practice together?

When we come together we play together but I don't live with my parents any longer. So we can't practice together.

And who is the best player of the family?

I would say my oldest brother, that's Roxy-John. He started to play PDC tournaments now as well.

Where does your family originally come from?

My parents came 25 years ago from the Philippines to Vienna. All children were born in Vienna and grew up there. And we still live there. 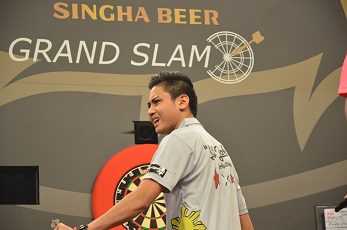 Did you play BDO/WDF tournaments as a youth?

Yes, I even three times took part in the Winmau World Masters and three times reached the semi-finals.

And when and why did you switch to the PDC?

I played some tournaments of the PDC Europe and worked pretty well. So I took part in Qualifying School 2014 and won a Tour Card by the Q School Order of Merit.

Have you got a sponsor who supports you so that you can take part in the Youth Tour or the Pro Tour?

I really was lucky with this. I've got a good sponsor, who allows me time enough to grow. Kim Huybrecht's sponsor watched the qualifying school and offered me a sponsorship. And One80 sponsors me as well.

What were your experiences on the Youth tour? And is it more difficult to play on the Pro Tour?

Do you like to play on stage or is it a problem for you?

I love it to play on stage. Probably you have to love it when you want to be able to keep up.

Did you have or do you still have any idols?

For me to be sure that was Kim Huybrechts. And I really was lucky and still am. Because we've got the same sponsor now and we always travel together and practice a lot together. He still is an idol for me but by now he's a friend as well. 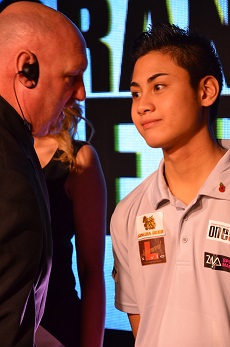 Is it in any way intimidating for you to play the big names?

No, I usually don't give it a thought at all. I always try to play the board and thus it doesn't matter who is my opponent.

And the crowd doesn't impress you either? How much do you catch on stage?

When I am really focused I don't catch much of what happens in the crowd. But when I can't manage to concentrate, as it happened today, I realize it's quite a lot of noise.

Are Major tournaments still something special for you?

Yes, of course they are. And the Grand Slam was even more special as I was the first ever German-speaking player to take part in it.

What I liked especially was that players from the PDC and the BDO take part in it. That's something unique - the only chance to compete against the top players from both organisations.

Have you got some kind of special "Major tournament preparation"?

I usually would have but at the moment my work just not leaves me the time for it. And in the evenings I am really done by work. It's difficult to pick myself up to practice at all. But I try to play at least twice a week. Next year I will finish my education and then it hopefully will change.

What do you work?

I train to be medical dentist's assistant and that is really physically demanding especially for the back. I've even already got problems with my back and need medical massages for it sometimes. 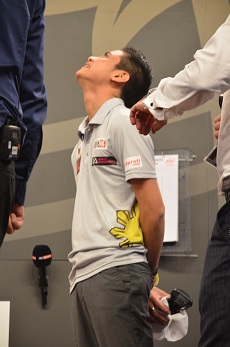 What do you think about Super League? Would you say it offers a great chance for improvement?

I am sure it does. You always play 15 matches on a really high level and in Superleague Eastern not only Austrians take part. Like in Germany we don't have a lot of top players. But all the top players from Eastern Europe play in it as well.

And what happened recently?

As there are still discussions I don't want to commentate at the moment.

Do you have a goal and what is it?

I by all means intend to get professional and really only live from playing darts. I would like to reach my goal when I am 25.

Will that not be difficult?

Yes, of course it will be and there is at the moment no one in the German speaking countries who really lives solely from darts. And to be sure it's not easy to find sponsors in Austria or Germany. It seems to be easier in the UK. But I am somebody who usually goes ahead with what he's set his mind on.

So do you play to move to England and play the complete tour? It's a lot of travelling when you live in Vienna.

That is true. It's much farther and more complicated than from the Netherlands and Belgium - even from Germany. But I will first finish my education. And then - well when you intend to move your partner should agree to come with you and there should be a chance to work in your profession as well.

Many young people of your age love partying or go clubbing - what about you?

Oh well - I've no time at all for such things. Due to the lack of time my social live - or to even to have some kind of social life - is not easy either. But I still have got my girlfriend and I am really grateful she stays with me despite this circumstances.

What is it that fascinates you in darts?

I would say winning! And competition! 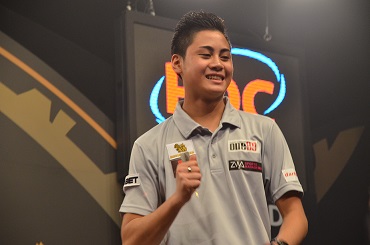 Who is Who: Rowby-John Rodriguez